The dark and bright side of Honduras…

Home/The dark and bright side of Honduras…
Previous Next

The dark and bright side of Honduras…

One day we went on a cultural walk with Geert and a bunch of Dutch people around the city to learn more about it’s history, the so called unsafe part and it’s people. Since we have been traveling for a very long time and since we have been to very poor regions around the world, we had a good impression of the things happening in third world countries, but after getting the inside information that Geert could provide, even we were standing perplex at times.

The president of Honduras created a dry law the whole year round on sunday starting at 5 in the evening. The family violence used to peak on sunday night and most of the workers would stay at home on monday because they were still too drunk to go to work. With this dry law, the peak in violence has decreased dramatically and there was an increase to the presence of workers on monday, but still you find some drunk people lying in the streets, unable to go home after a ‘busy’ night. 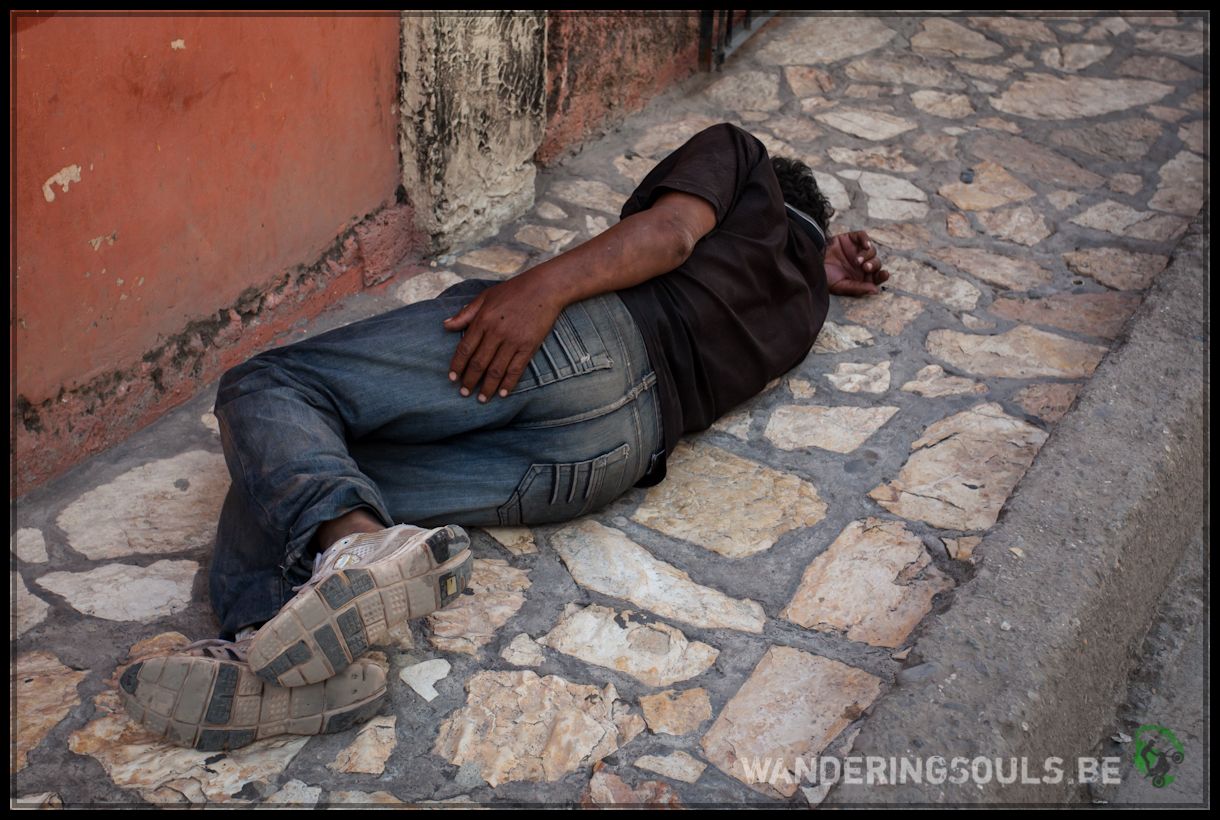 Drugs is the main source of income here in Honduras, so legalizing drugs would definitely make sure that the Western Hemisphere second poorest country (Haiti being number one) would grow even poorer in the end! Honduras is the main transportation country when it come to cocaine. The drugs are shipped from South America on super fast boats and dropped in the jungle in Honduras from where they make sure it goes to North America.  The drug lords offer people 50 dollars a day to transport a bag filled with 10 kilos of cocaine on foot over the hills to Guatemala. When you know that the official minimum wage in Honduras is 350 dollars a month (but in reality closer between 50 and 180$), you will probably realize why a lot of people do this and the drug lords are getting filthy rich when they have a couple of people transporting the drugs every day. 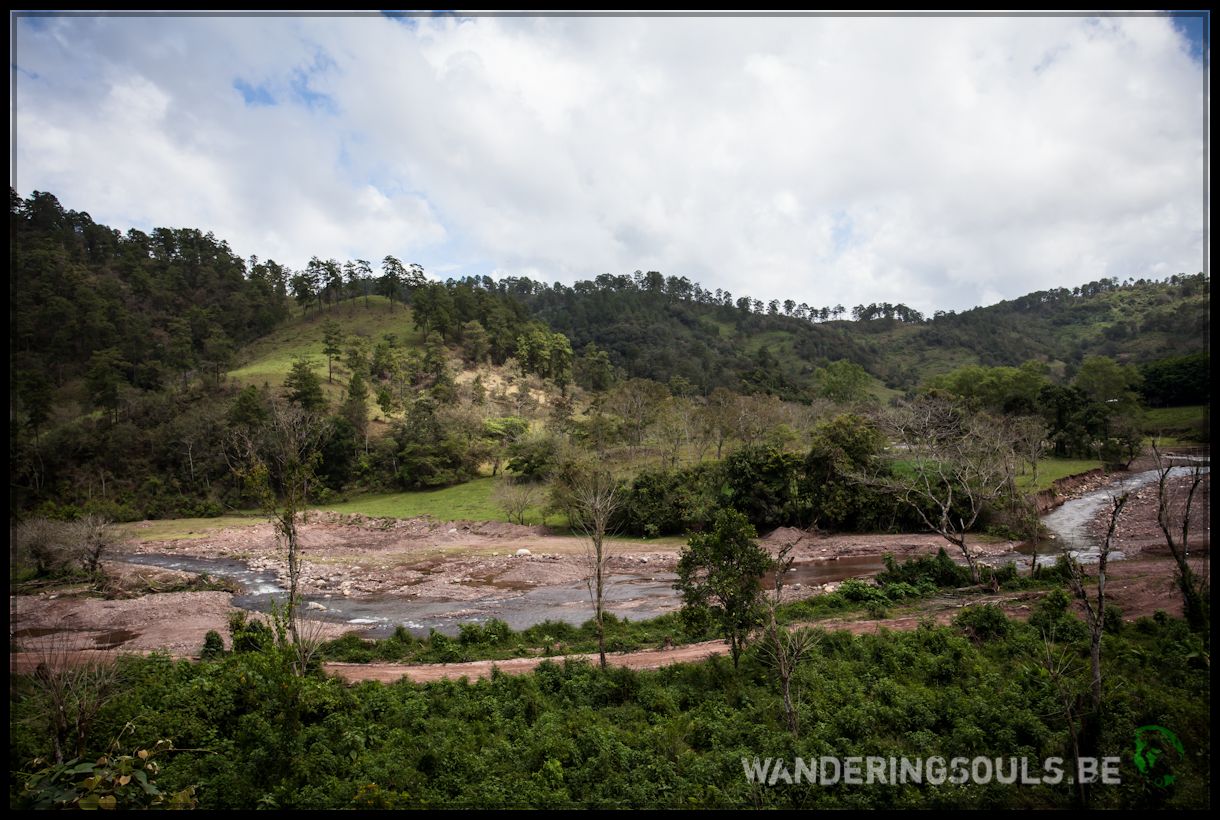 When you steal from the drug lord, he will rape your wife and then kill her, rape your daughters and then kill them, set your house on fire and in the end kill you too, so this way everyone in town knows that you should never want to mess with the drug lord. Remember the 350 dollars of the minimun wage they get here (if they even get it because the legal systems sucks big time), when you find out that they can just pay housing and food, but can’t afford medical assistance (500 dollars a month for a family) you also understand that when one of your family members gets sick and you can get the money for the treatment from the drug lord, you don’t have a lot of choices left. The same drug lords have found out that real estate is a good way to launder their money and this has made the prices in Copan skyrocket and there is nothing left that is affordable for a normal family, especially when you know that a loan at the bank is 25 percent for real estate and 60 percent for a personal loan! This makes it so that drug money is everywhere here in Honduras and as long as Western society keeps buying it, they will have this as their main source of income… 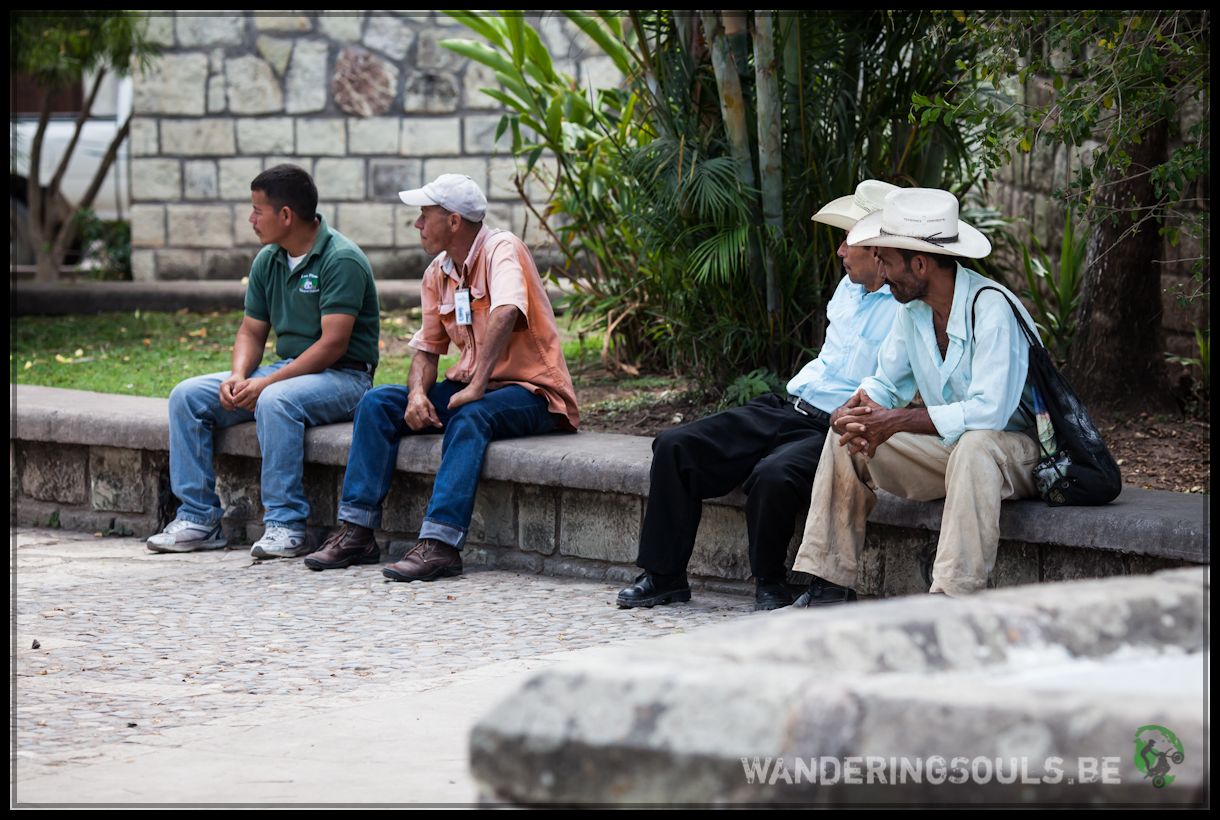 A lot of Western people always say that children should be in school instead of roaming the streets and we also felt like this, until we got an insight on the reason why they roam the streets. Goverment officials (police and teachers) a lot of the time don’t get their wages for a couple of months in a row because the goverment doesn’t have it, so they are working but they aren’t getting paid. What do you expect these people to do? What would you do…? 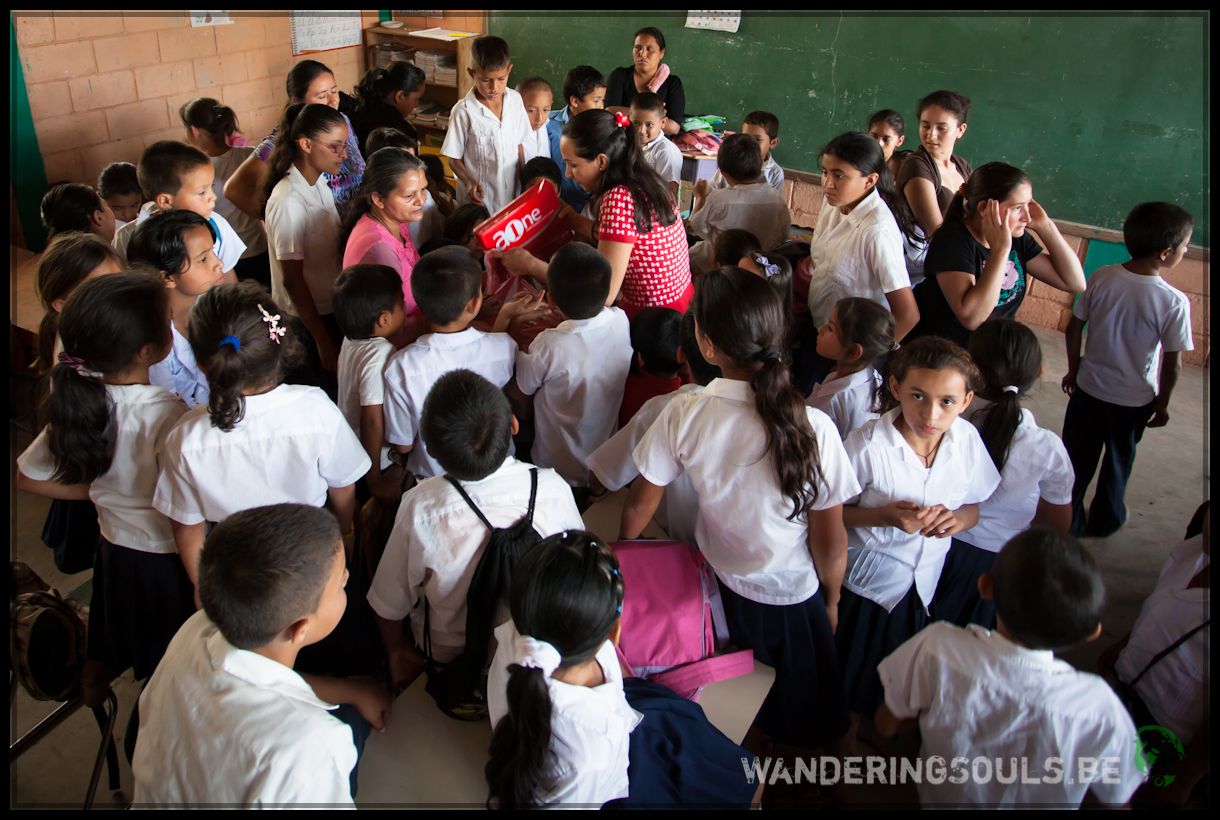 The police becomes ‘corrupt’ by trying to get some money out of tourists for ‘traffic violations’ and the teachers just let the children play in school instead of teaching them things because on top of working without getting a wage, they also don’t get school materials for their children. Parents know this and can either send their kids to school where they will learn nothing, or send them out in the streets were they can at least try to earn some money for the whole family so they can eat at the end of the day. This all makes you look at certain things in another perspective! At our fellow travellers: think about this next time you get stopped by a cop in a third world country or when a kid wants to sell you something for one dollar… 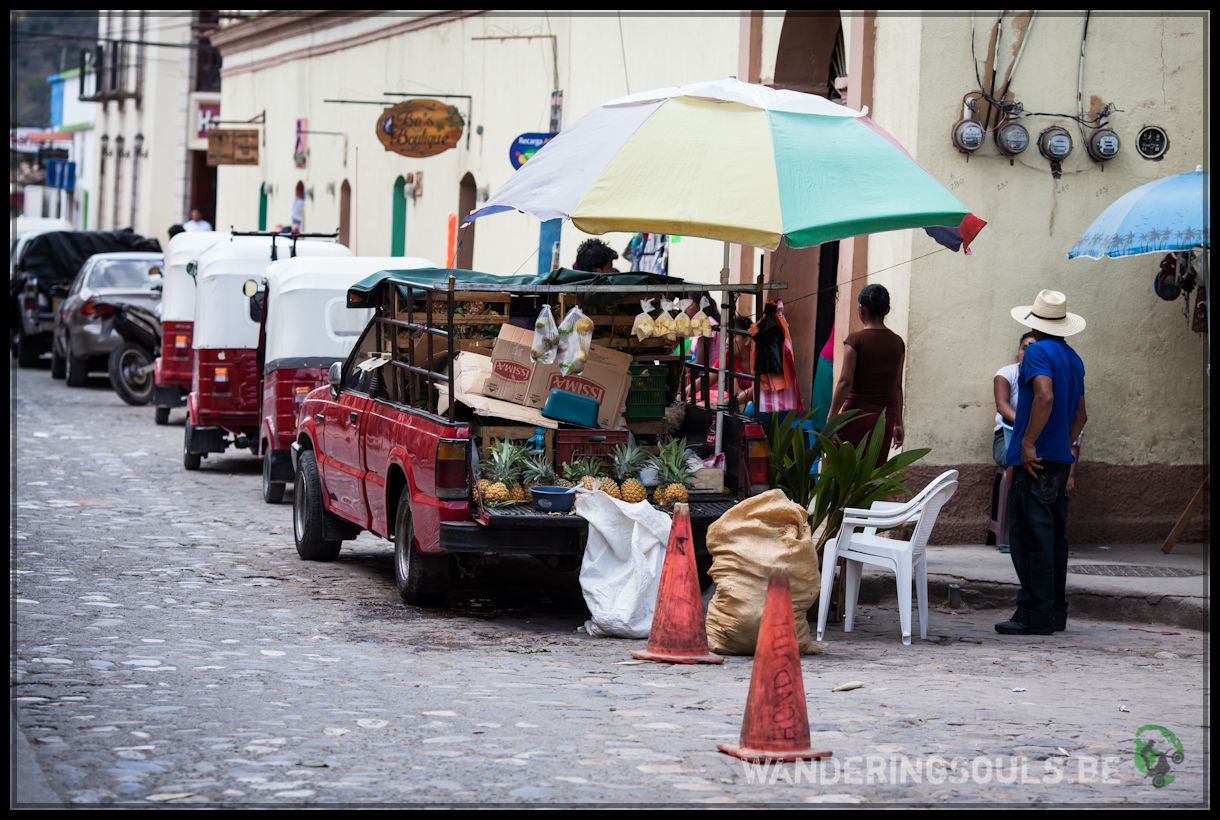 As some of you know (and if you look at our website you should know) we have our own charity page and we started with it at the beginning of this trip. We both just felt that we were so fortunate to be able to travel around the world and meet so many nice and heartwarming people all over the world, that we decided that it was time to give back. We could have just sent money to one of the million charities around the world, but we always have the impression that some (if not almost all) of the money you donate goes to ‘technical support’ and just a small amount actually makes it to it’s final destination. In our case we would do things different because we would already go to third world countries, so the money we would receive would be used to buy products in the countries themselves and ALL the money would go to the charity we choose. 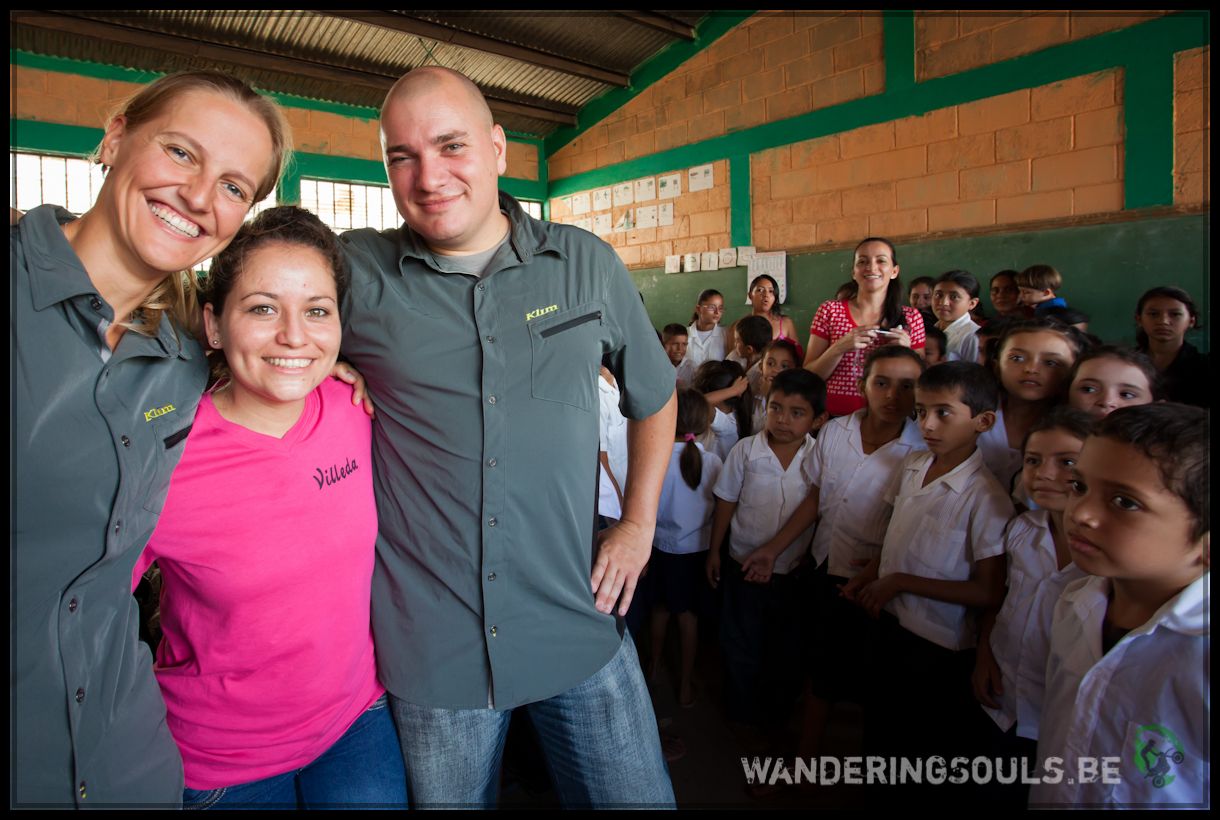 Well, after putting our charity on our website, on Facebook and on a few other places, we had A VERY SMALL amount of people who made a donation and this almost put us in tears. When we see people asking for fundings for their trip, others give them money, but when you want to make a difference in the world and give children tools for education, they don’t! This upsets us… If you drink one (1!!!!!) Starbucks coffee less and just donate that amount to us, we can give one kid what he needs to learn to read and write!!! THINK ABOUT IT… 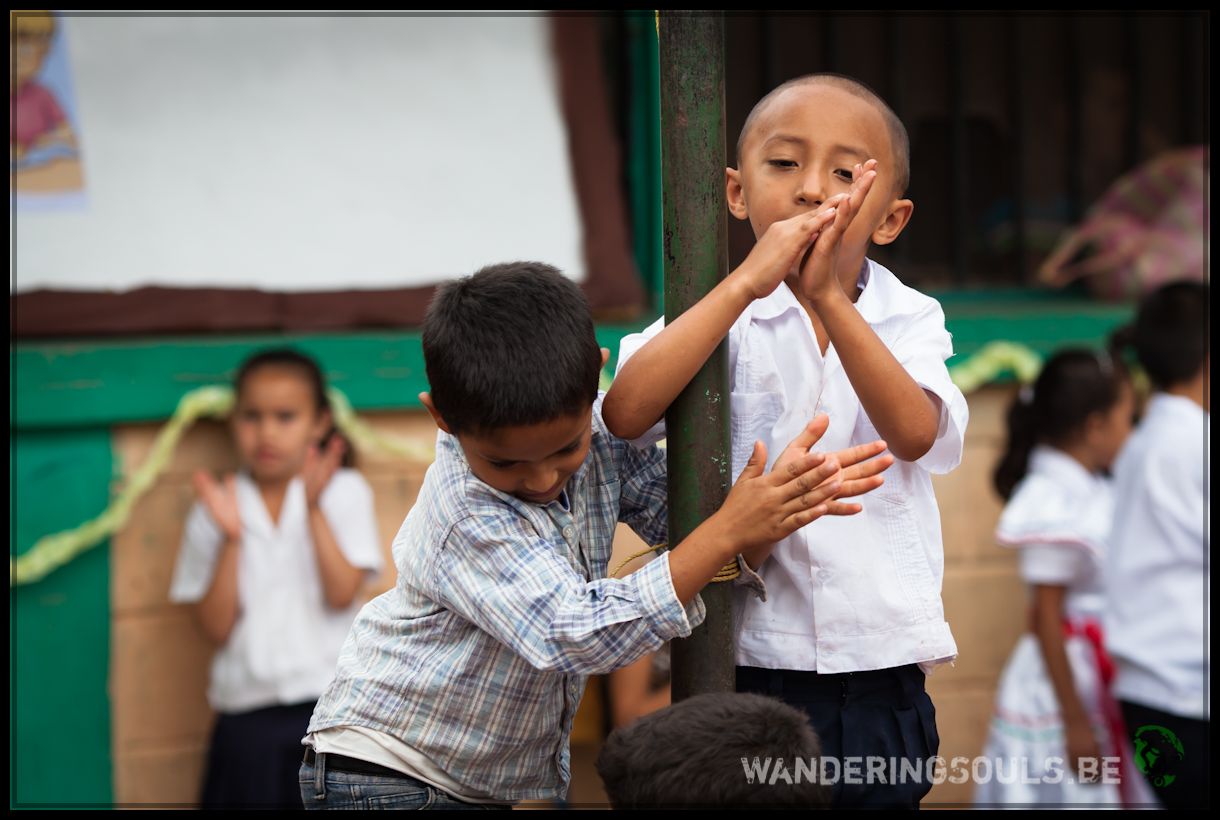 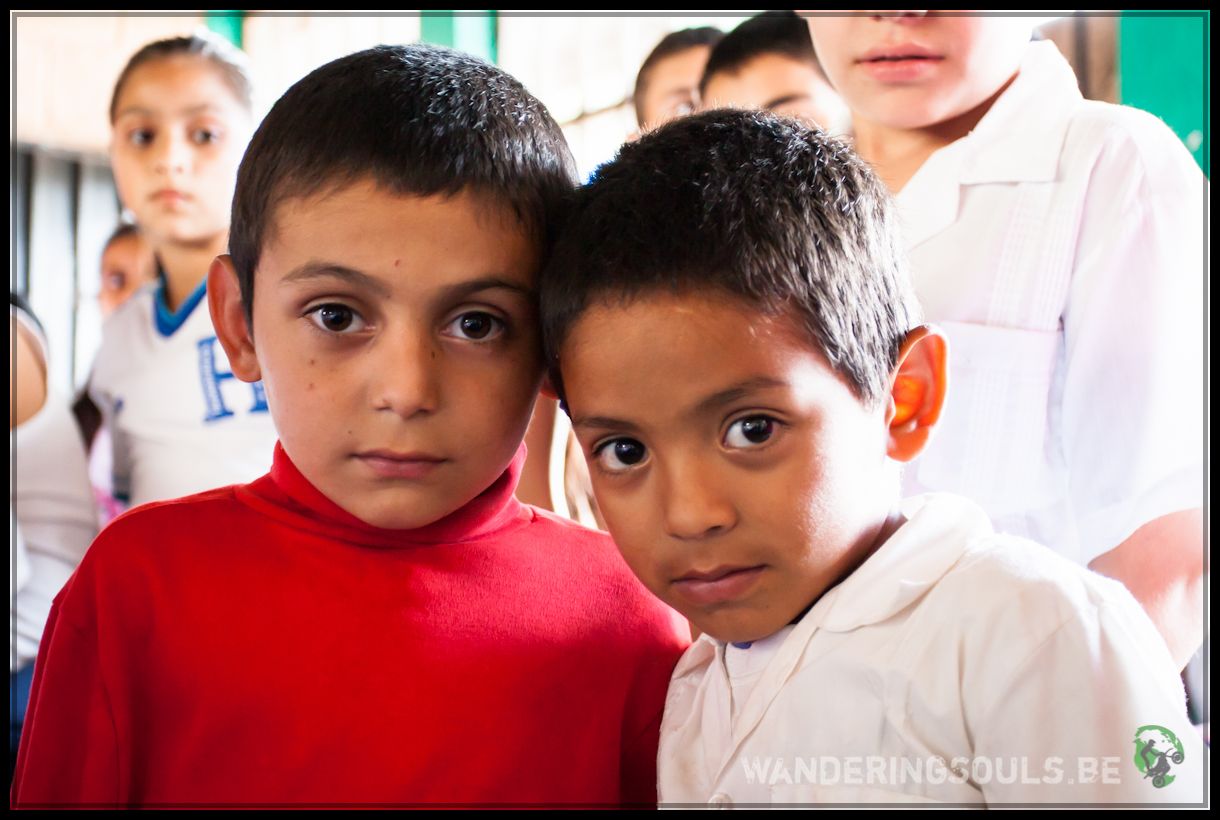 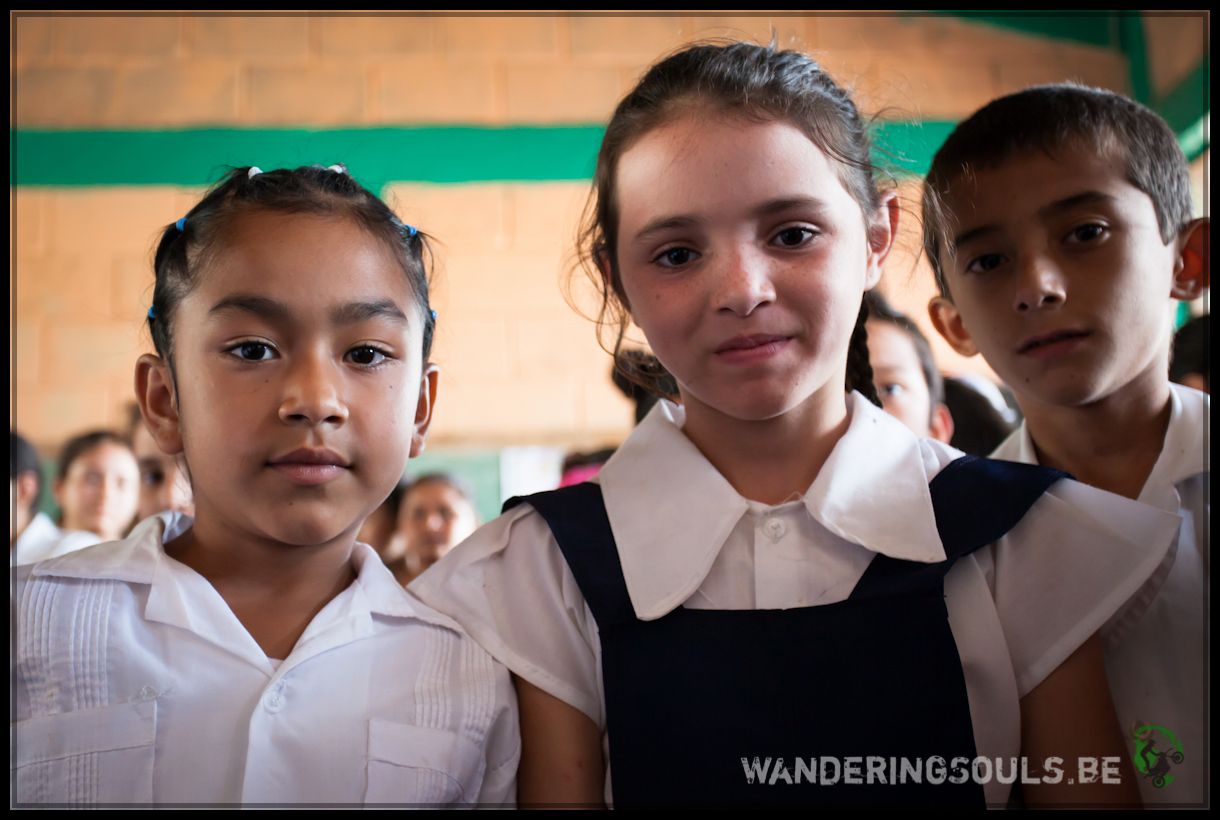 Well, in any case; THANK YOU very much: mom and dad, Jay Jones, Thomas Wuyts, Lois and Richard Nowels, Emmy and Freddy Stalmans and Marc and Marleen Van Wijck!!! You guys have the heart in the right place! The principal had told us what she desperately needed for the youngest children, so they could get a good start of their school career and we tried to get as much as possible with the small amount of money we had. Thanks to Geert and Rosita, we got some discount in the local shops and we were able to buy everything we wanted. The additional amount that was needed we paid ourselves. 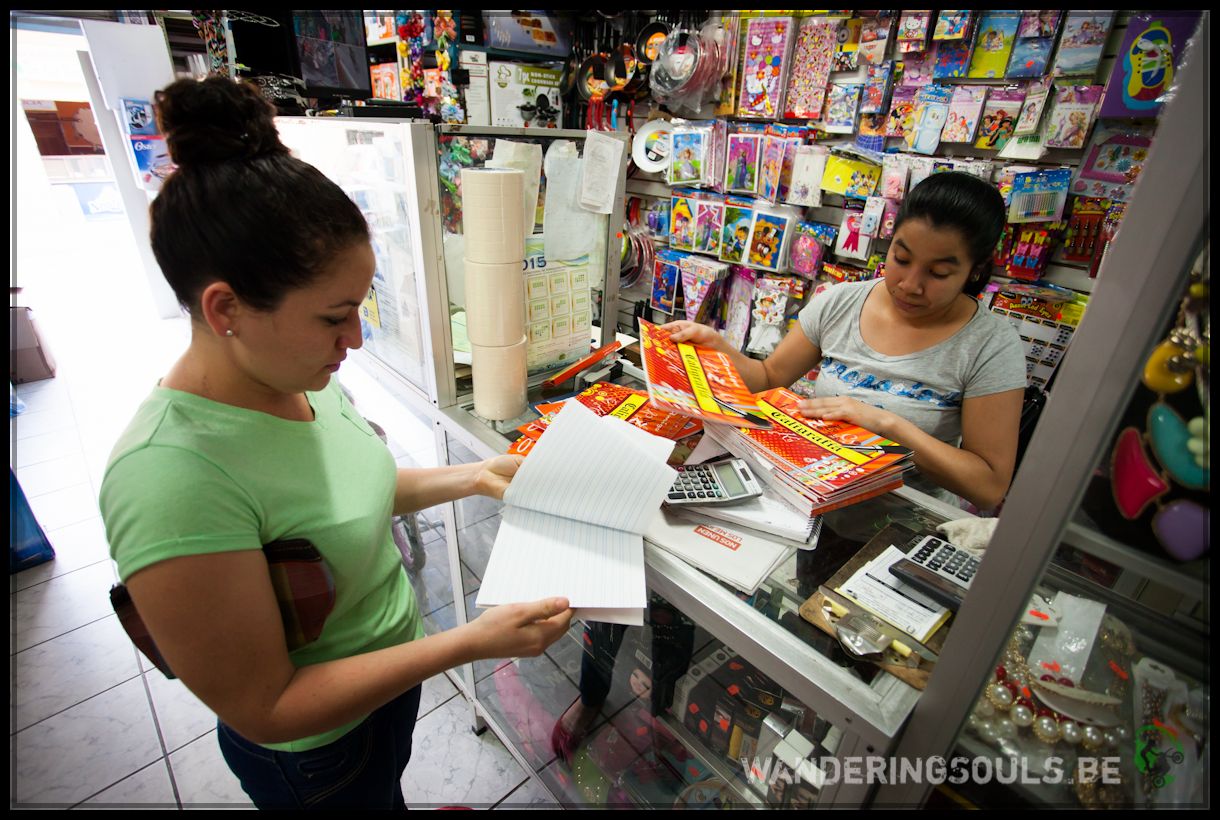 We chose a small local school in the mountain village of Mirasol where they desperately needed school supplies. By this time we are beginning of March and half of the children didn’t have enough money to buy the books they needed to learn how to write! We went to local businesses in Copan, got the necessary supplies and went with Geert and one of his waitresses, Rosita, to the school. Rosita went to school there when she was young and now she is working in the Via Via Café and in the meantime going to university to become a psychologist! We want to give more children the opportunity to actually learn something in school in order to make something of their life and in order to have dreams and pursue them! 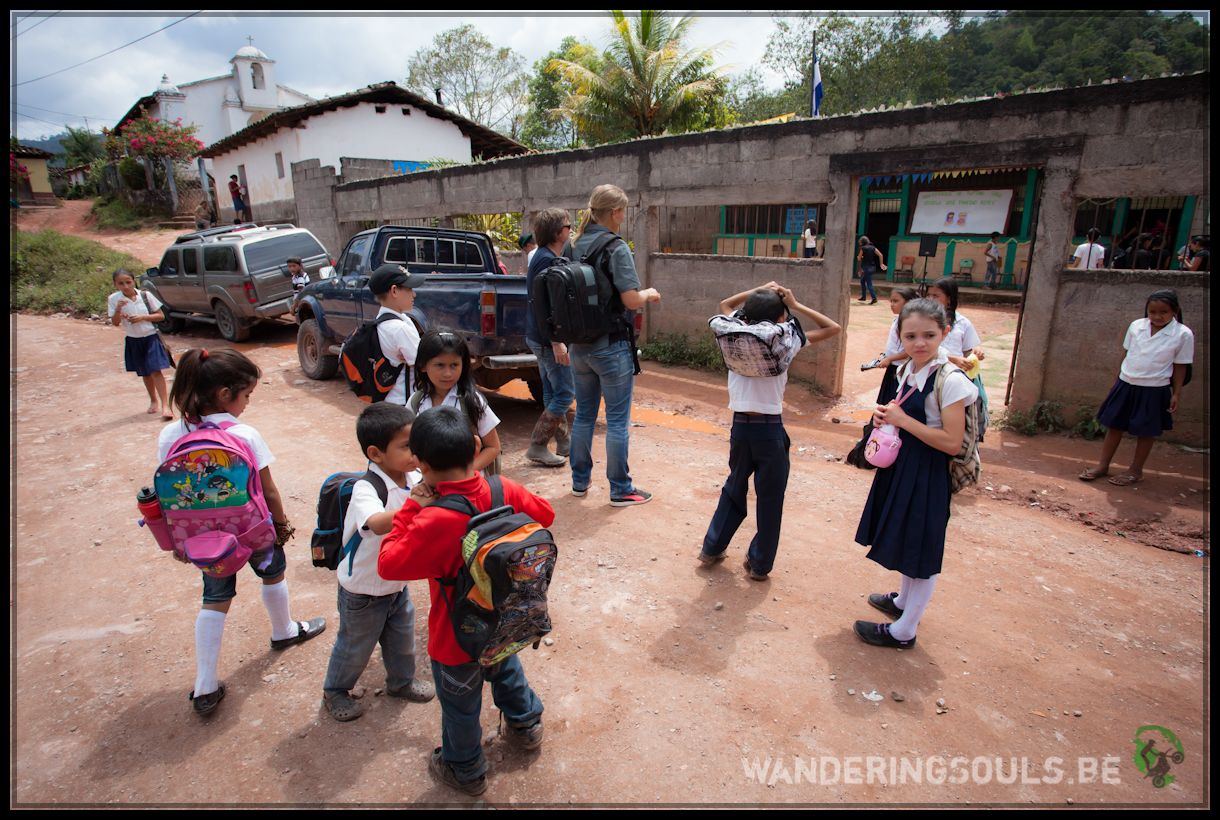 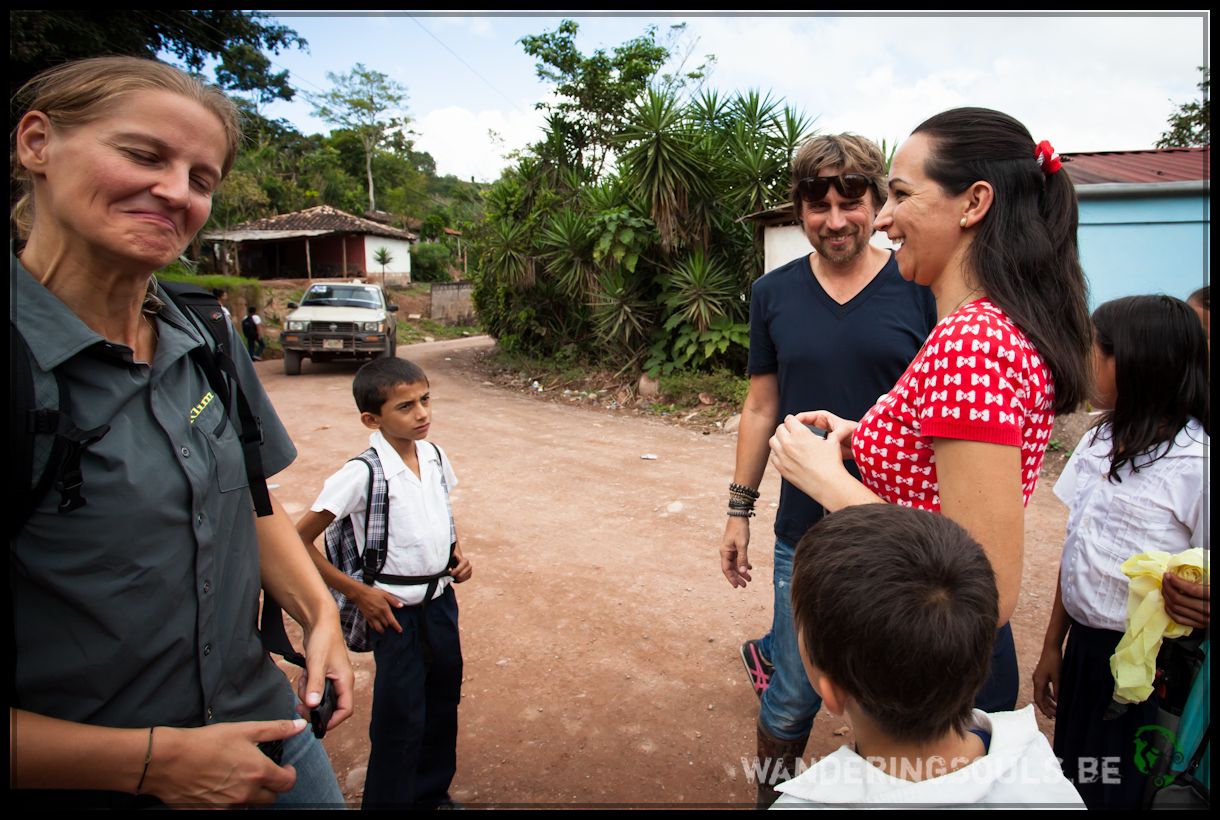 The school had even managed to get a hold of the senator and he said that he was so glad that he could welcome us to this school and he even invited us to sit at the honor table to have some lunch with him and with the school principal. Everyone was very nice to us and when we told them we were from Belgium and showed them on the map where that was, they were all very impressed. 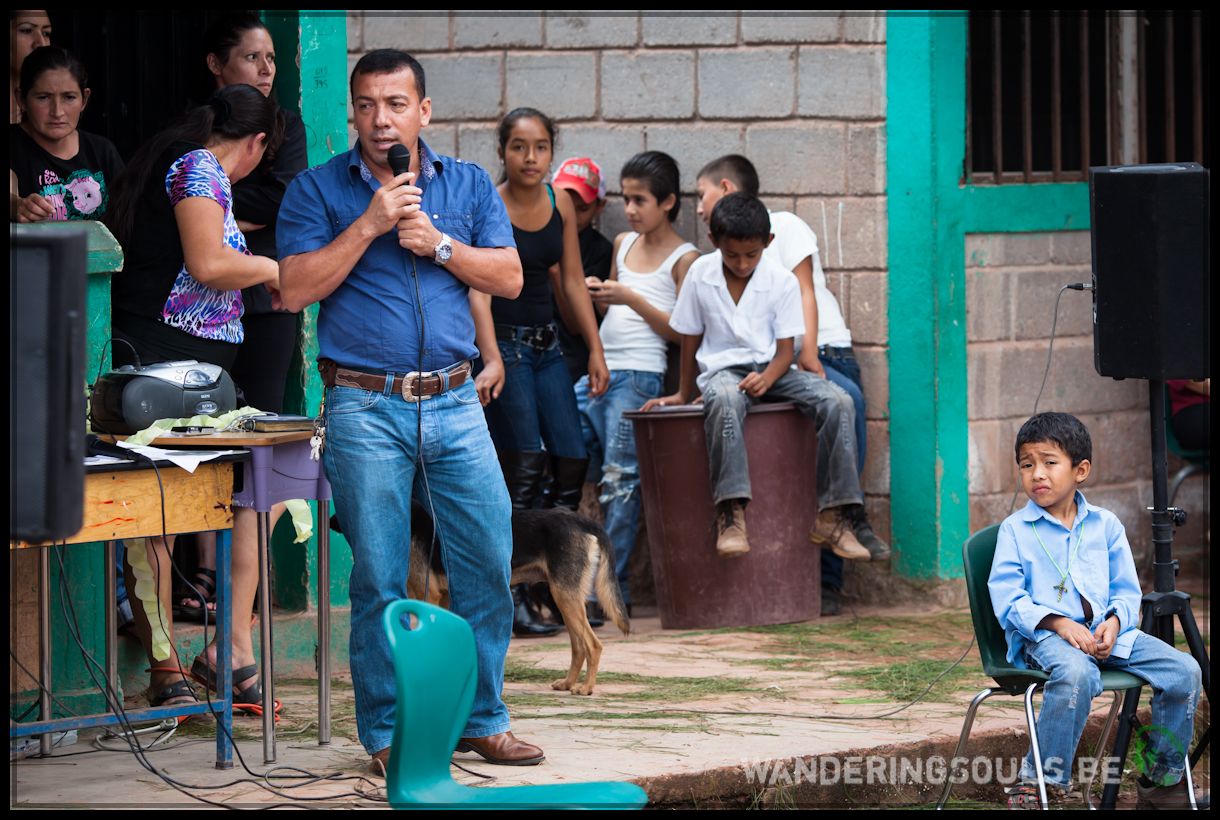 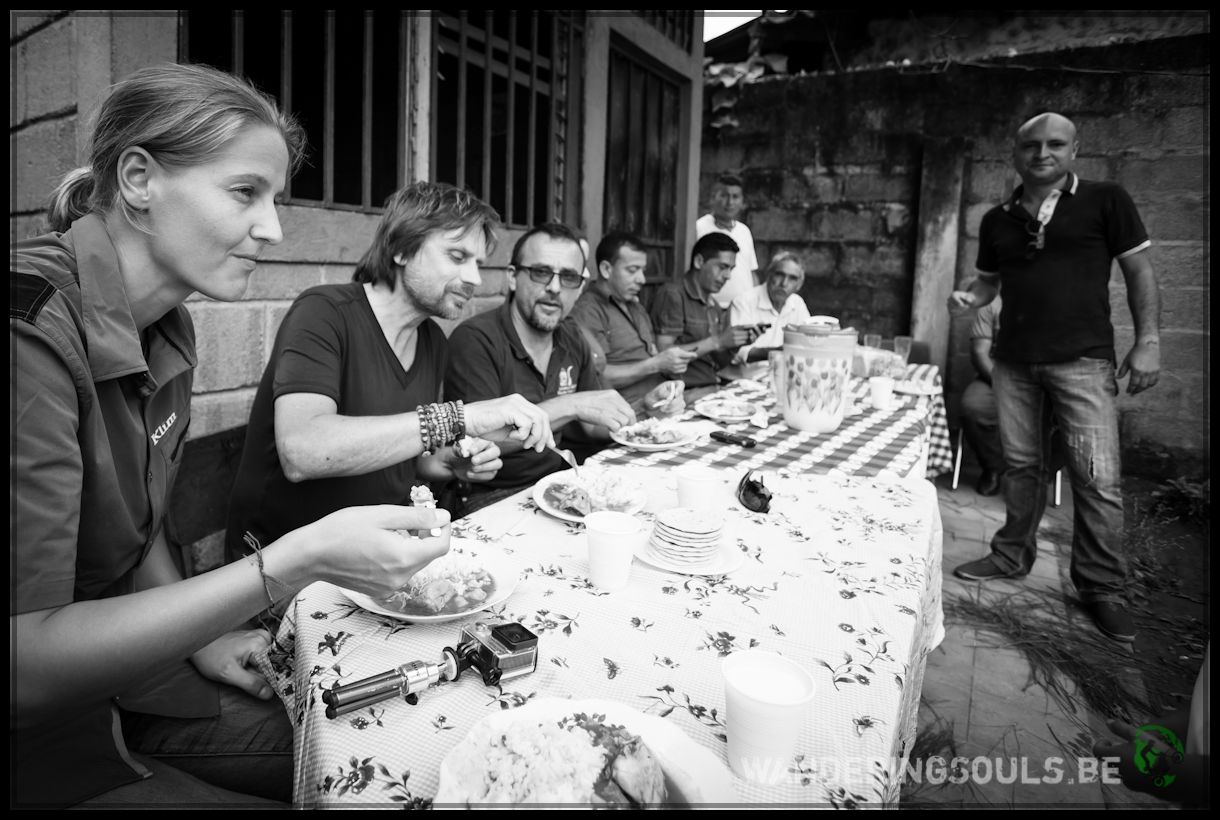 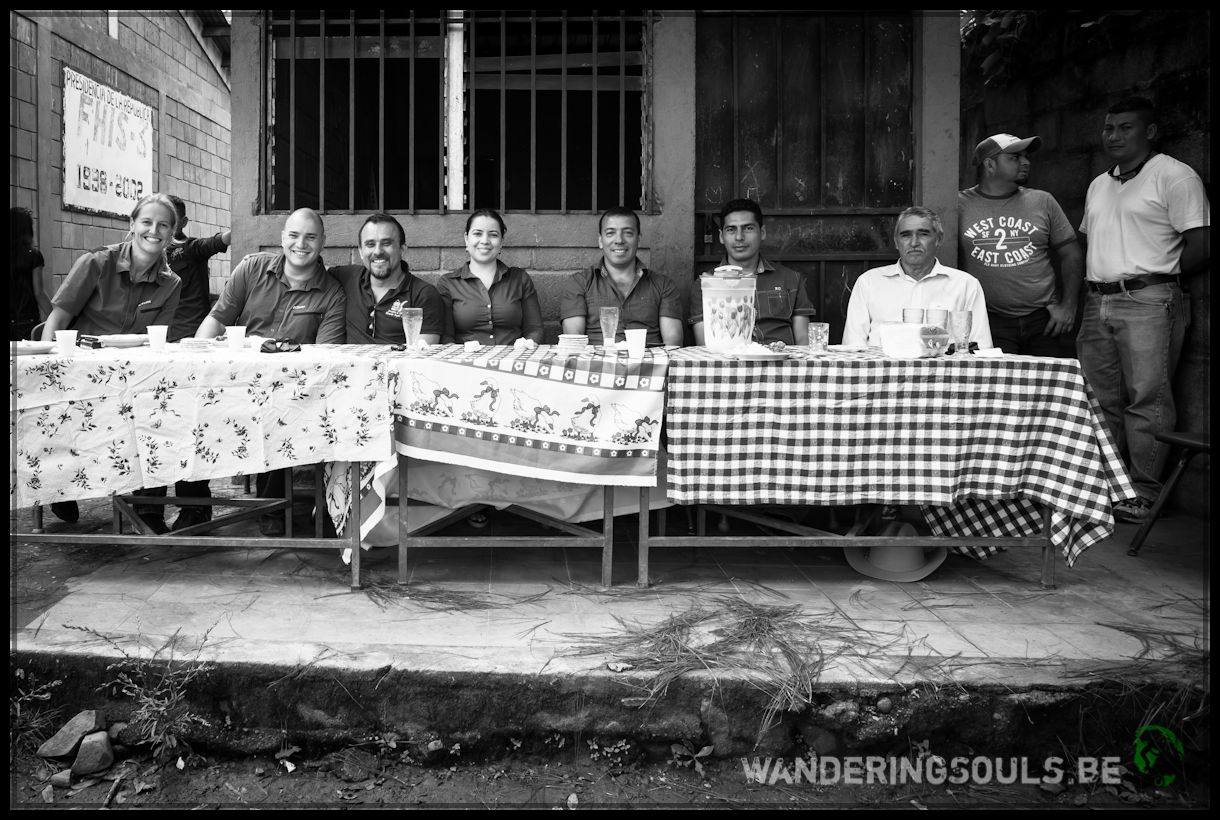 The children did their performances for the party and afterwards they all gathered around us to see what we brought for them: 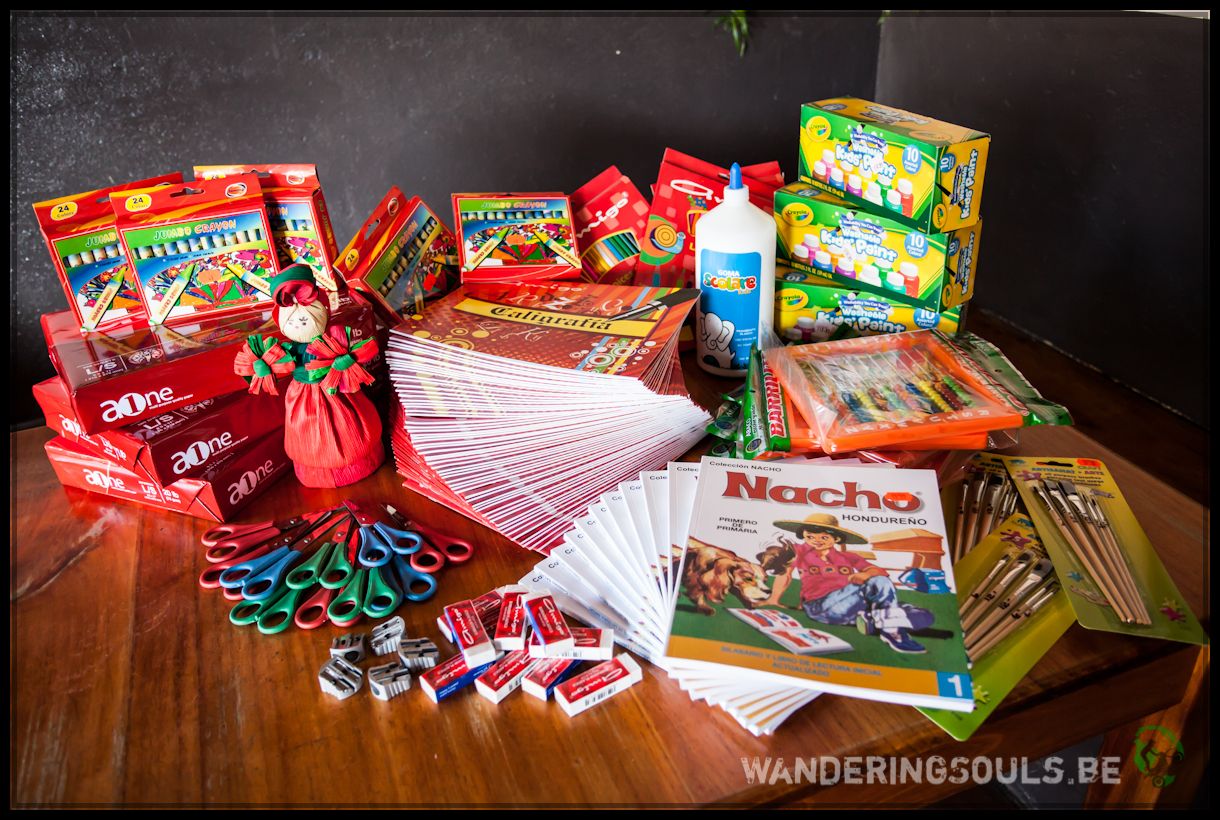 Most of the children were amazed to see such ‘tall’ people, even though for Western standards we aren’t that tall at all. One child came up to Kim and said: “oh you are so tall, I love it!”

These children all looked so happy and even though we only had school supplies for the first grade, they all were interested in us and kept looking in sheer amazement at these ‘white people’. Kim even had a shadow the whole time because there was one shy, but beautiful girl that stuck to her side the whole time, looking at her in total awe and amazement. 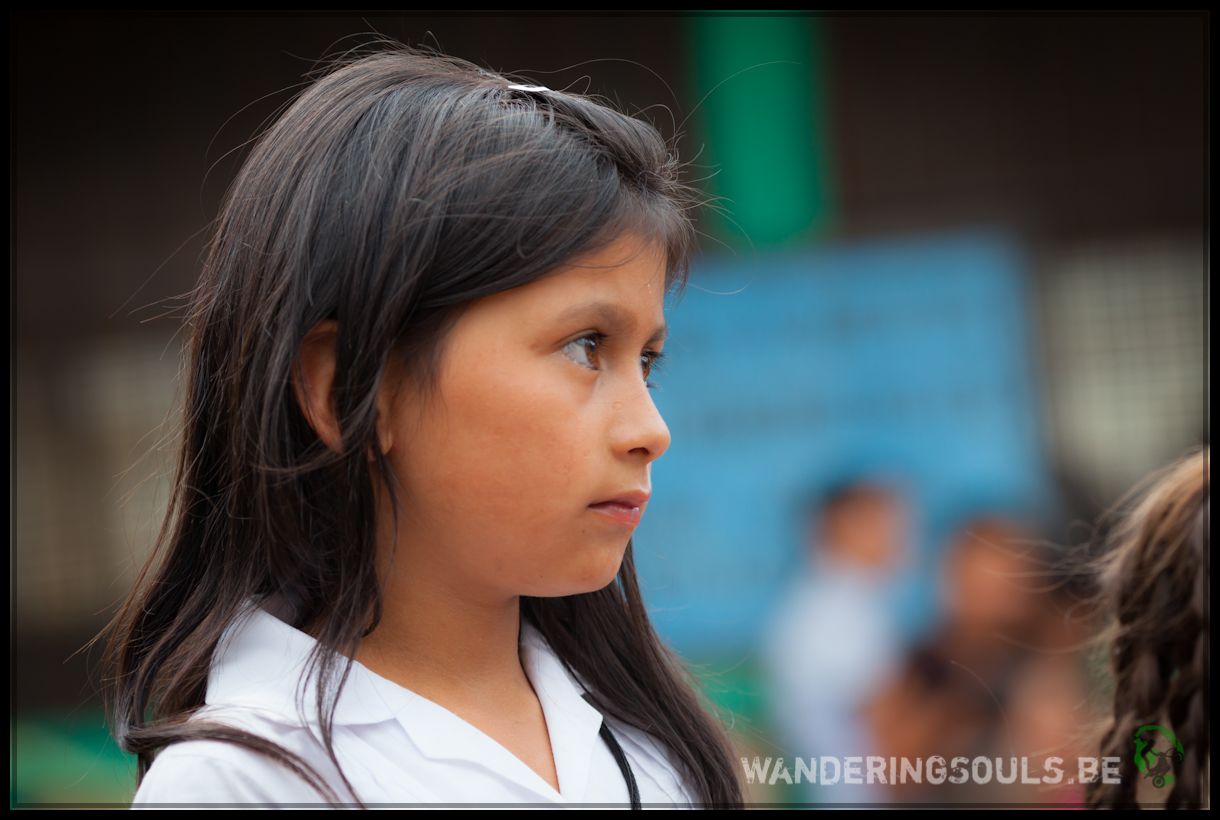 The teachers and the principal were truly touched by our gifts and we all left the school with a warm feeling. We know it is a very small contribution, but if every traveler would do something like this every once in a while, the world would instantly be a better place and by an act this small, you can inspire a whole lot of children! So if we have convinced you that we are making a local difference now and then, please consider a donation for the next school we’ll visit. It’s not for us but for them that we do this! You won’t die from missing that coffee but you just might save a life… 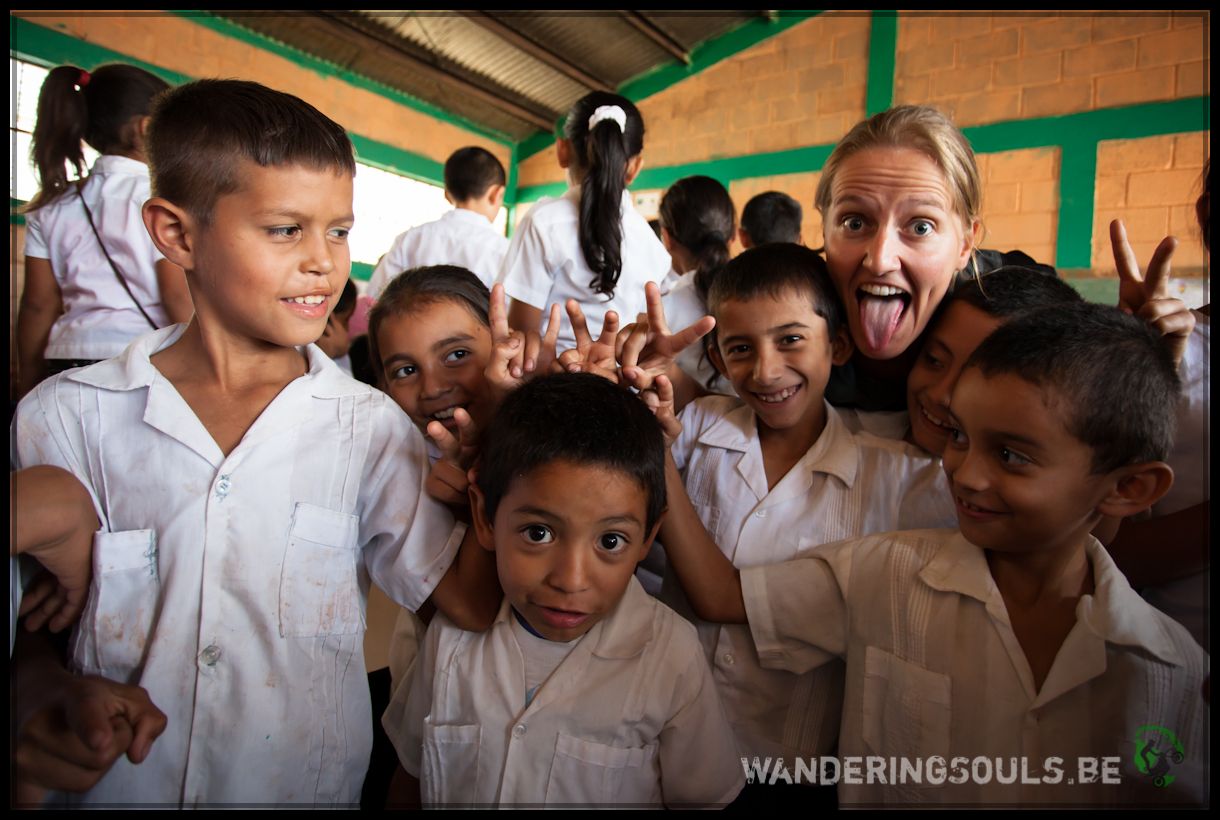