A present from the sky…airmail!

A present from the sky…airmail!

After the police corruption, we were just looking for some nice quiet time at the lake, but when we turned one of the many corners, we saw these guys in the middle of the road. We stopped because one of the guys was lying passed out with a big lump on his head by the side of the road, but when we looked at the other guy, he just put up his thumb to signal us that everything was ok! 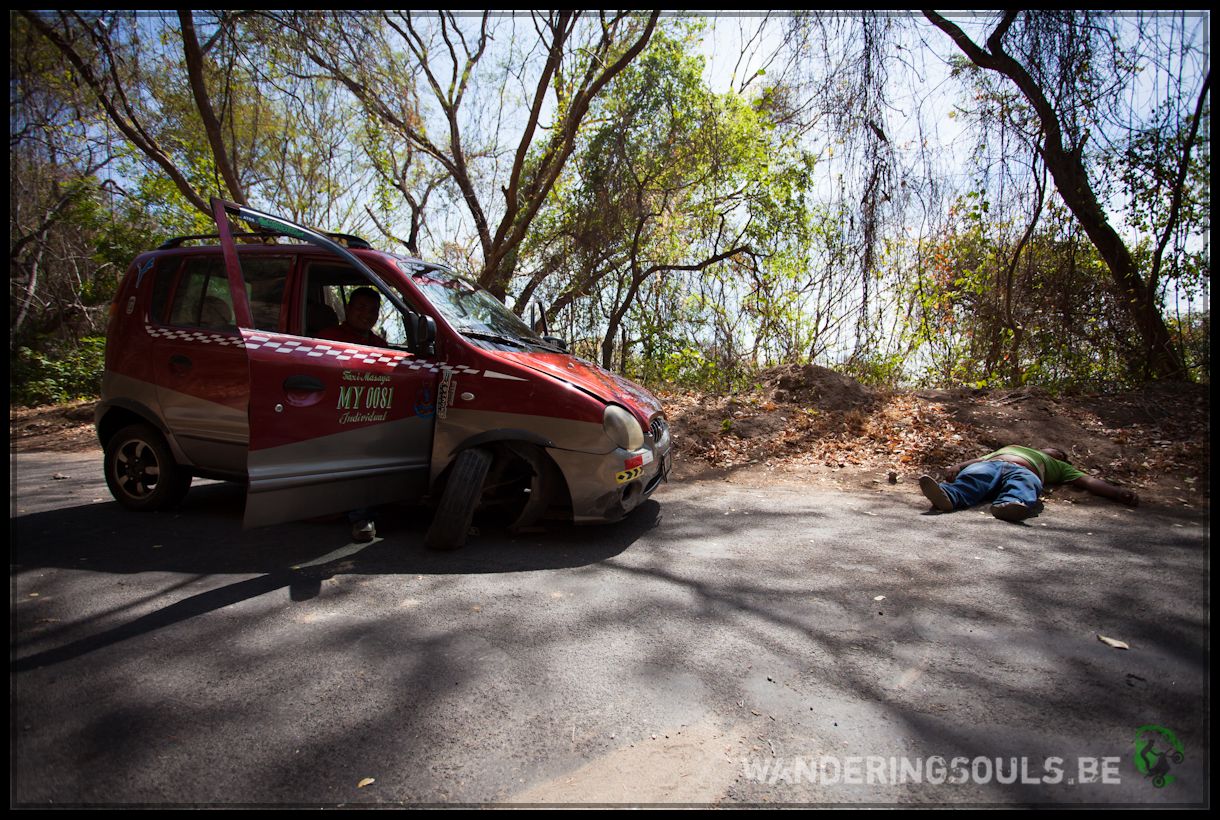 As you can see in the picture below, apparently these guys were so drunk that they just missed their turn and ran into the side of the mountain with their very small unreliable dinky toy car and the front axle just decided to quit working! The guy really wanted to pose for the picture, so who were we to say no, right?! 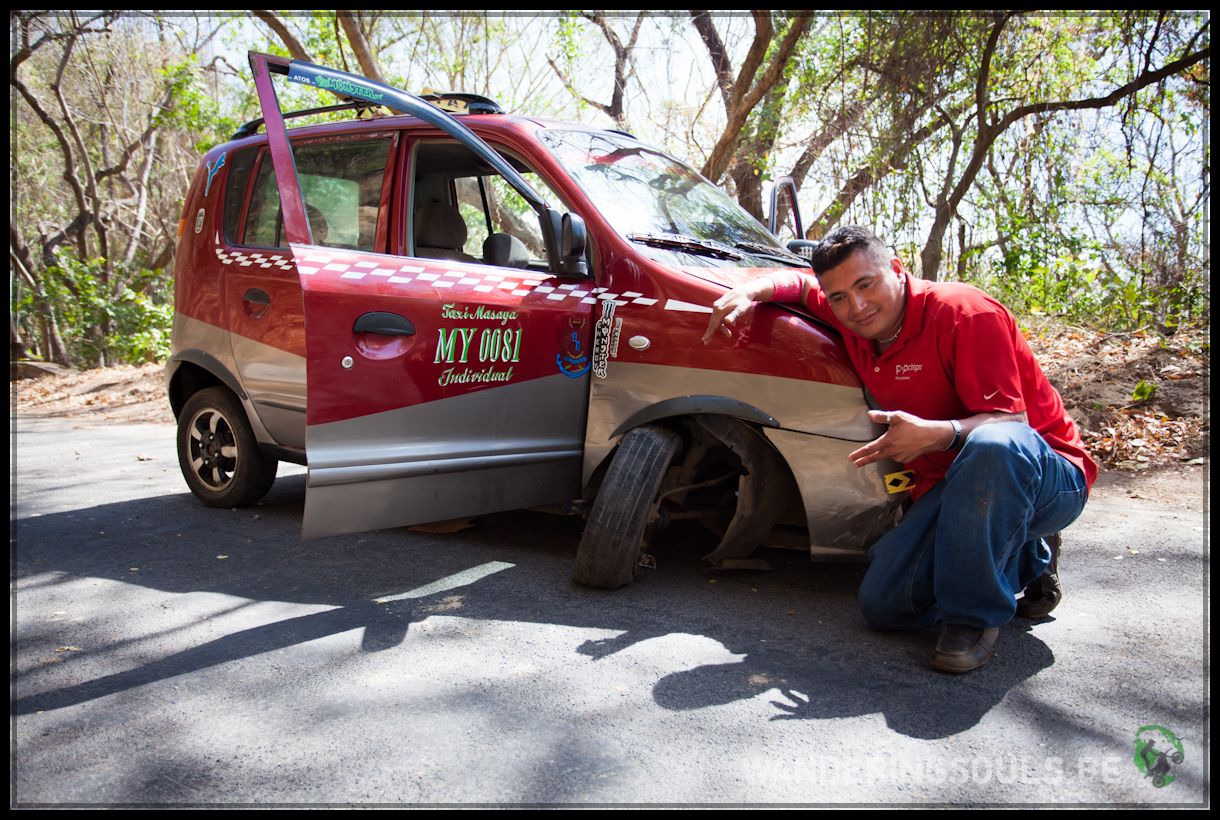 After meeting dumb and dumber, we arrived at the lake and Roel and Azure were so kind as to go on prospection for us and they had managed to find a reasonable priced hotel/hostel right by the waters of lake Apoyo. 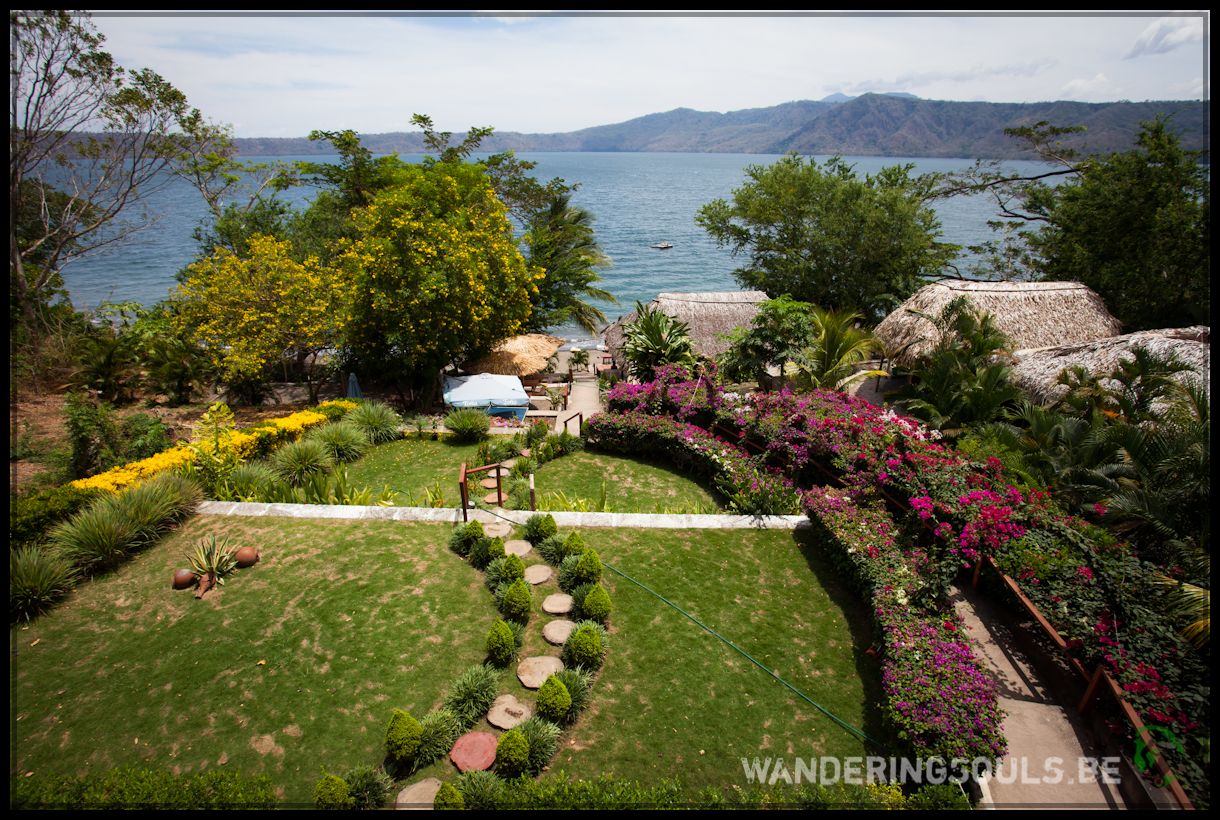 Together with Roel, Azure and David, we had an amazing time at the lake. 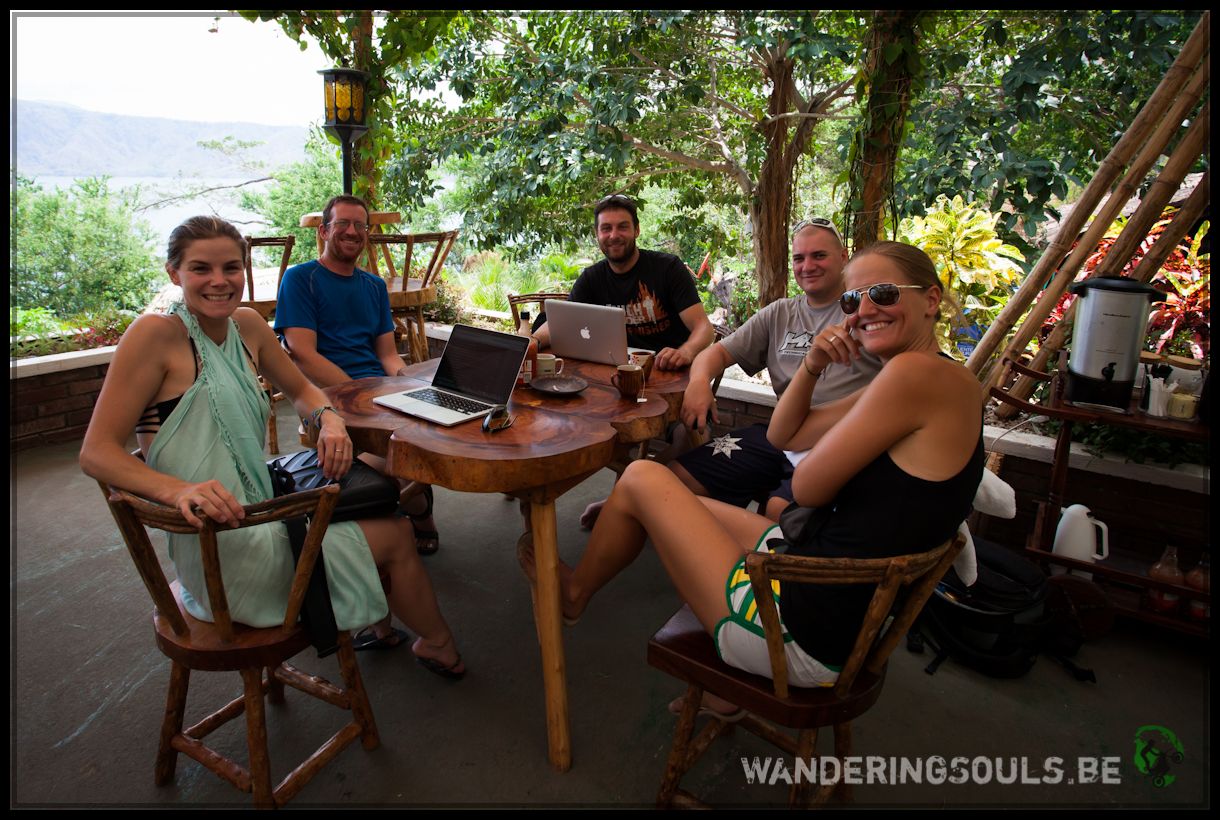 After we had just gotten out of the water Kim felt something wet land on her shoulder and she thought it was starting to rain, but there were no clouds in the sky… It turned out that a very nice bird had brought her an airmail and dropped it on her shoulder! Oh well, in Belgium they say that it brings you luck when a bird shits on you, but as you can see from her face, Kim wasn’t too happy with her present. 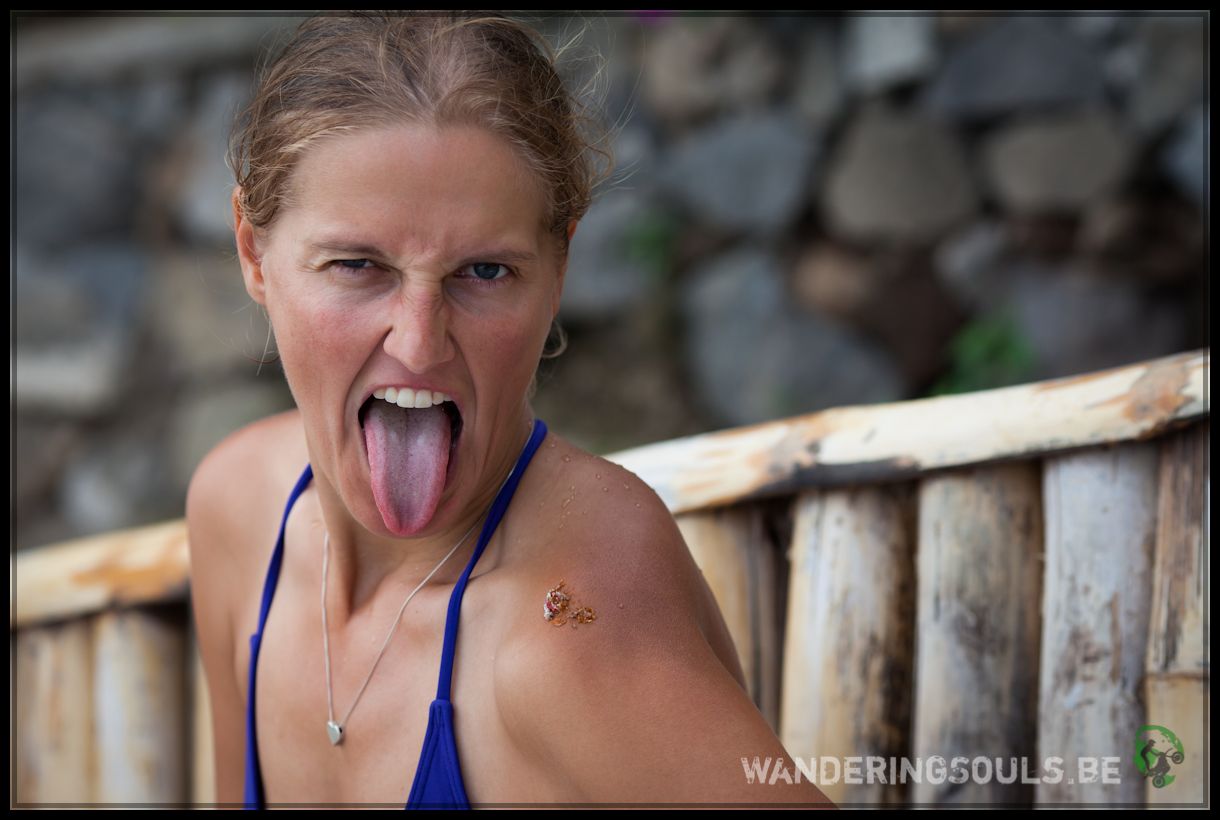 We wanted to stay a few days at the lake but it turned out that they didn’t have any room left for all of us for the next day and because we still wanted to spend some time together, we decided to leave the lovely lake and head on over to Granada, but first we had to go to the lookout over the lake (it turned out that all the other tourists in Nicaragua were thinking about doing the same because at the same time we arrived, they dropped off two busloads of tourists!). 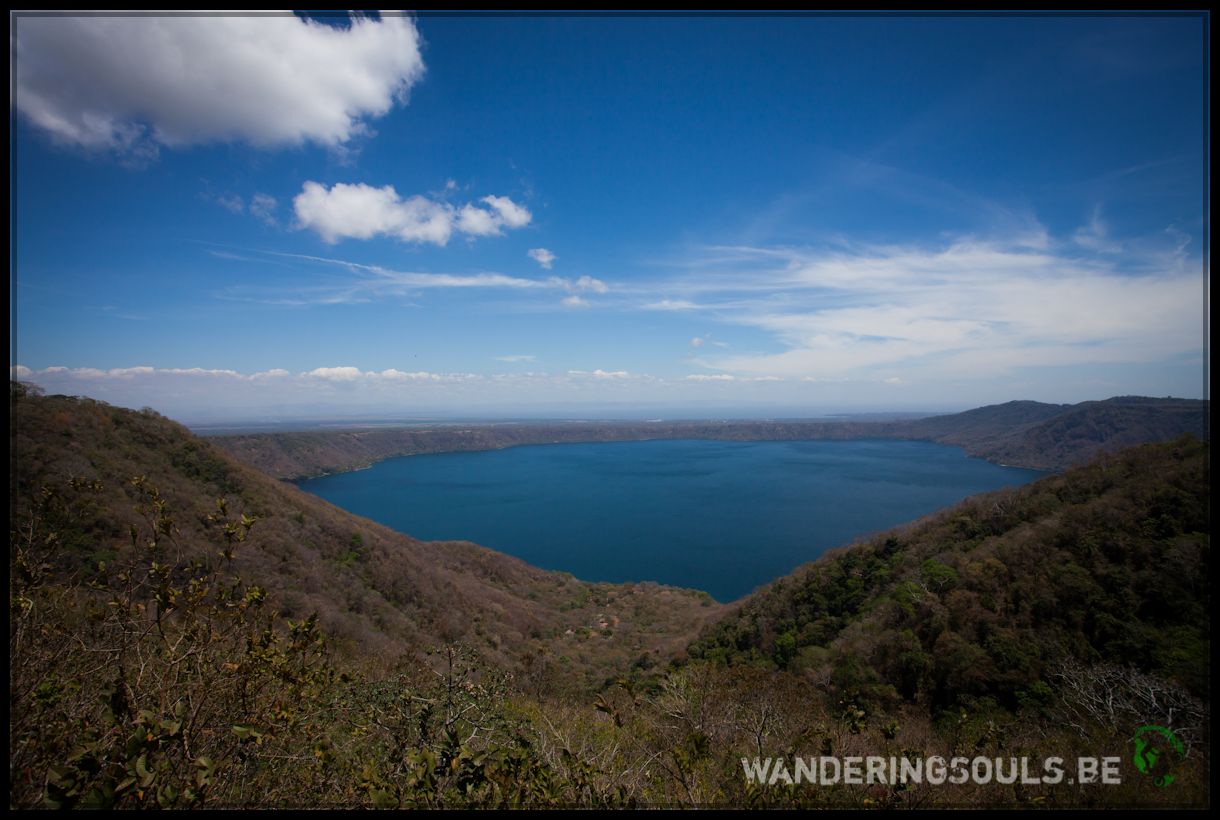 In Granada we weren’t sure what we wanted to do, but we all agreed that we wanted to see it’s pretty yellow cathedral, but on the way in, seeing all the nice buildings and feeling the lively atmosphere (and because David had found an Irish pub) we decided to stay here overnight and find a ‘cheap’ place to stay. 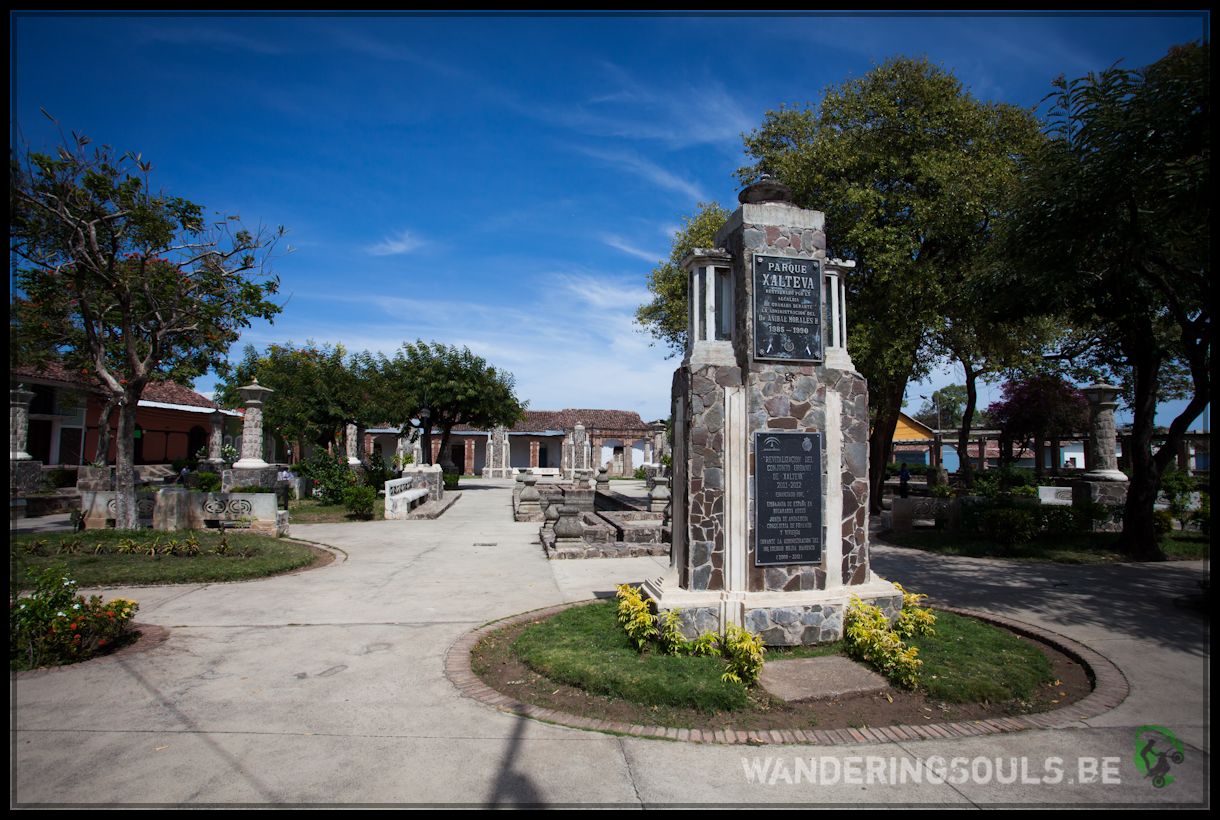 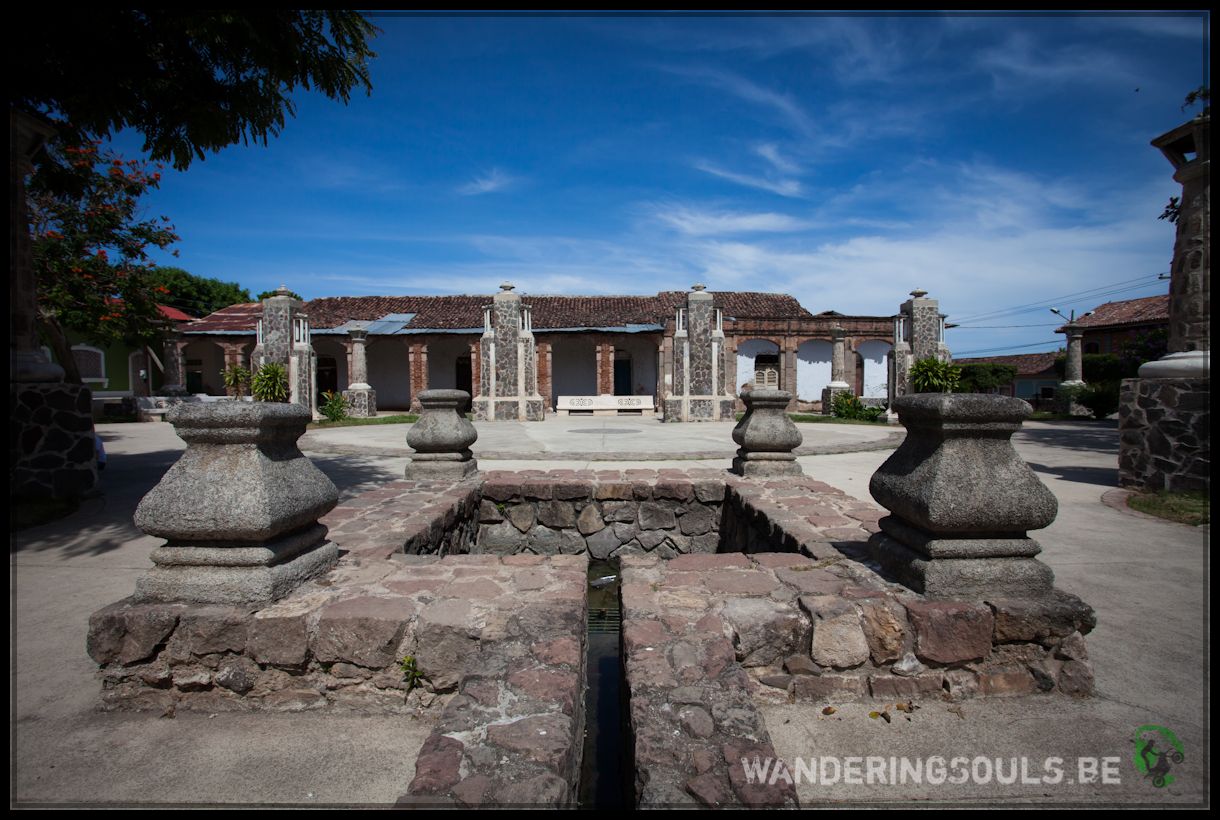 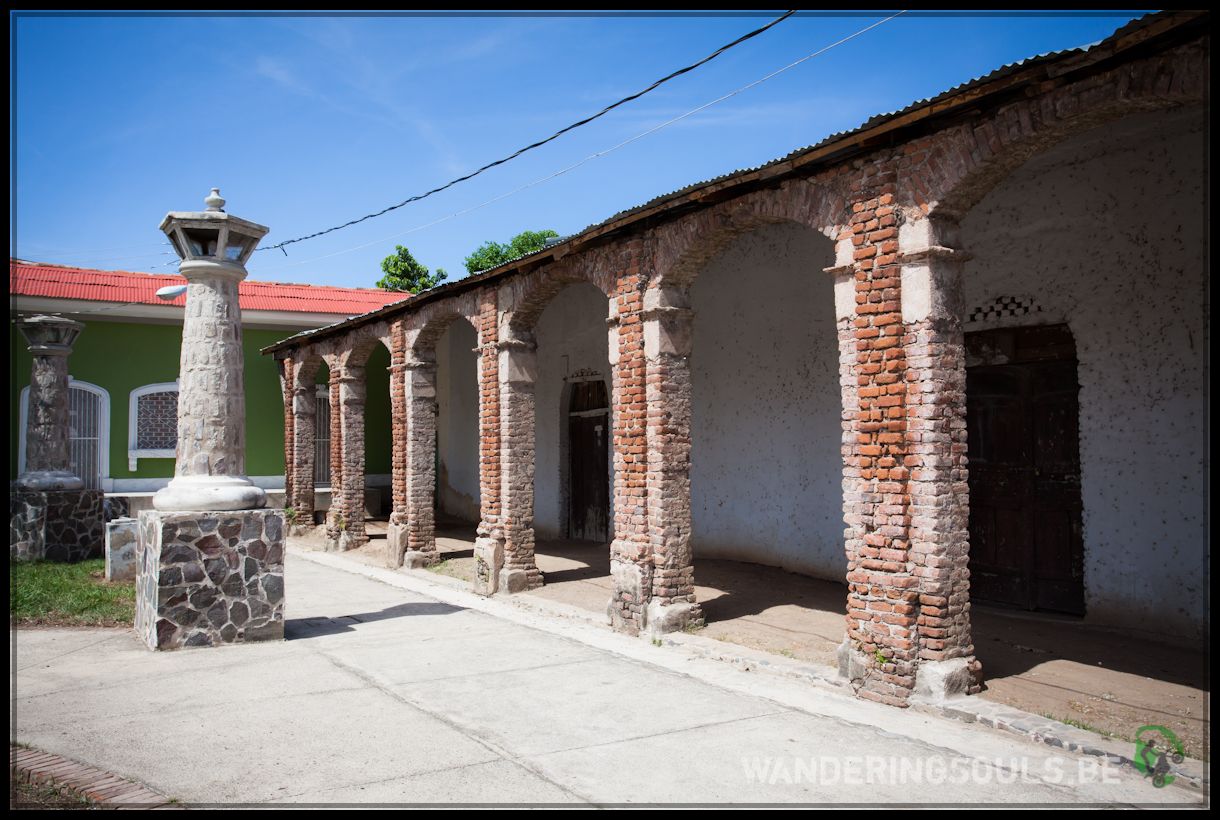 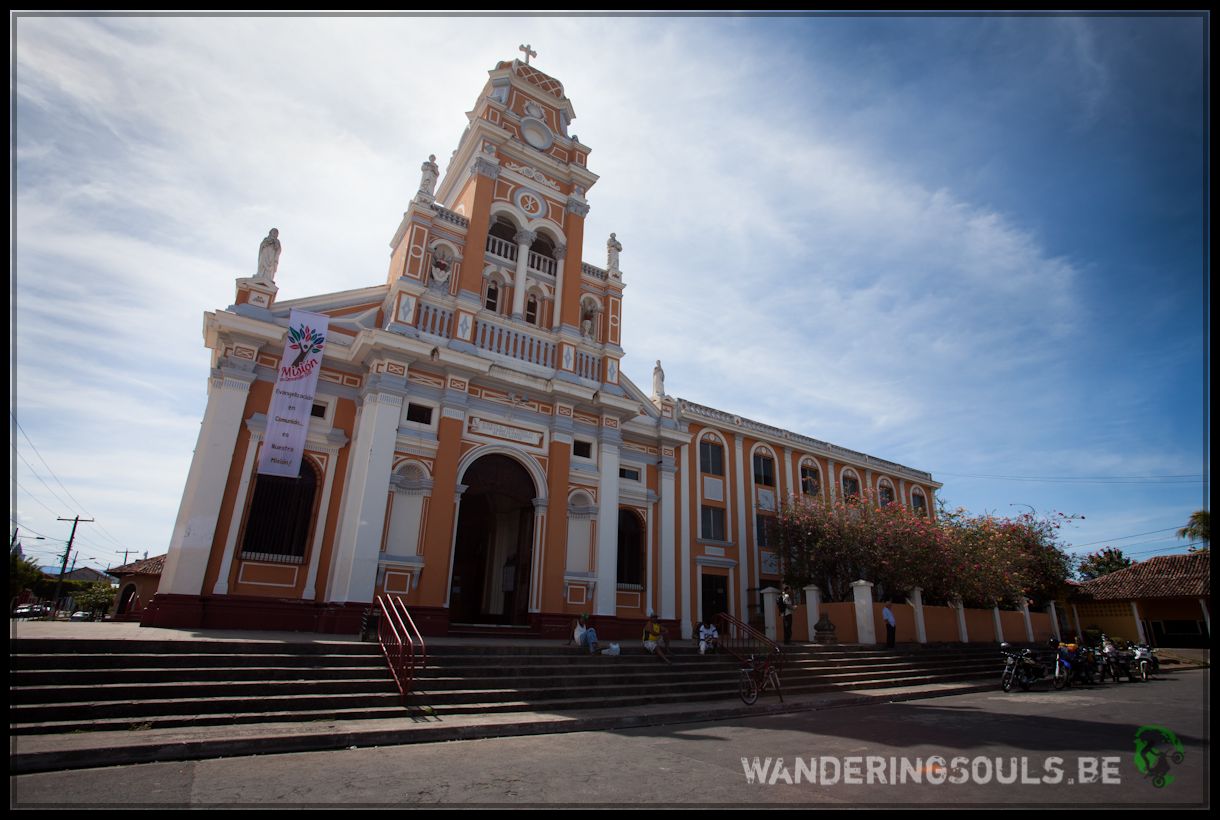 The invasion of the foreign biker gang in Granada! 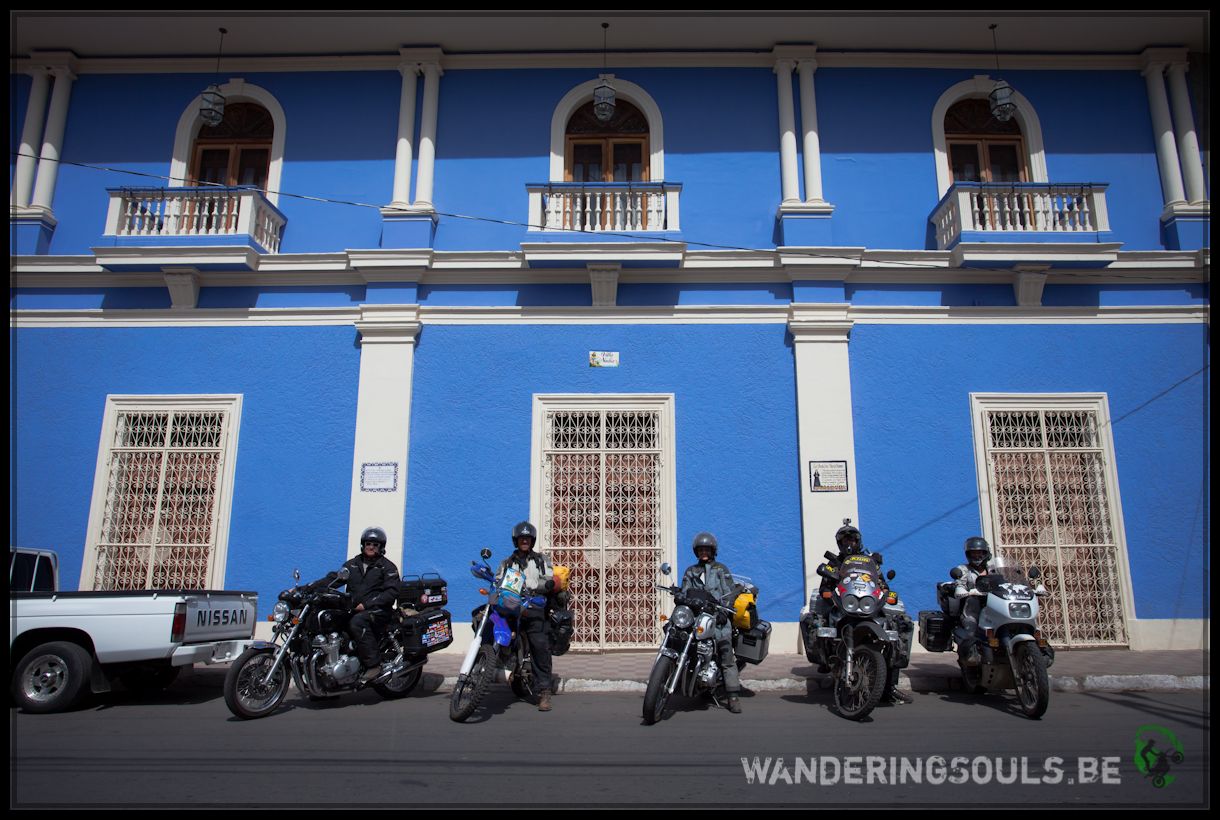 The very nice yellow cathedral from Granada is one of the many buildings that they have restored after years of total neglect. 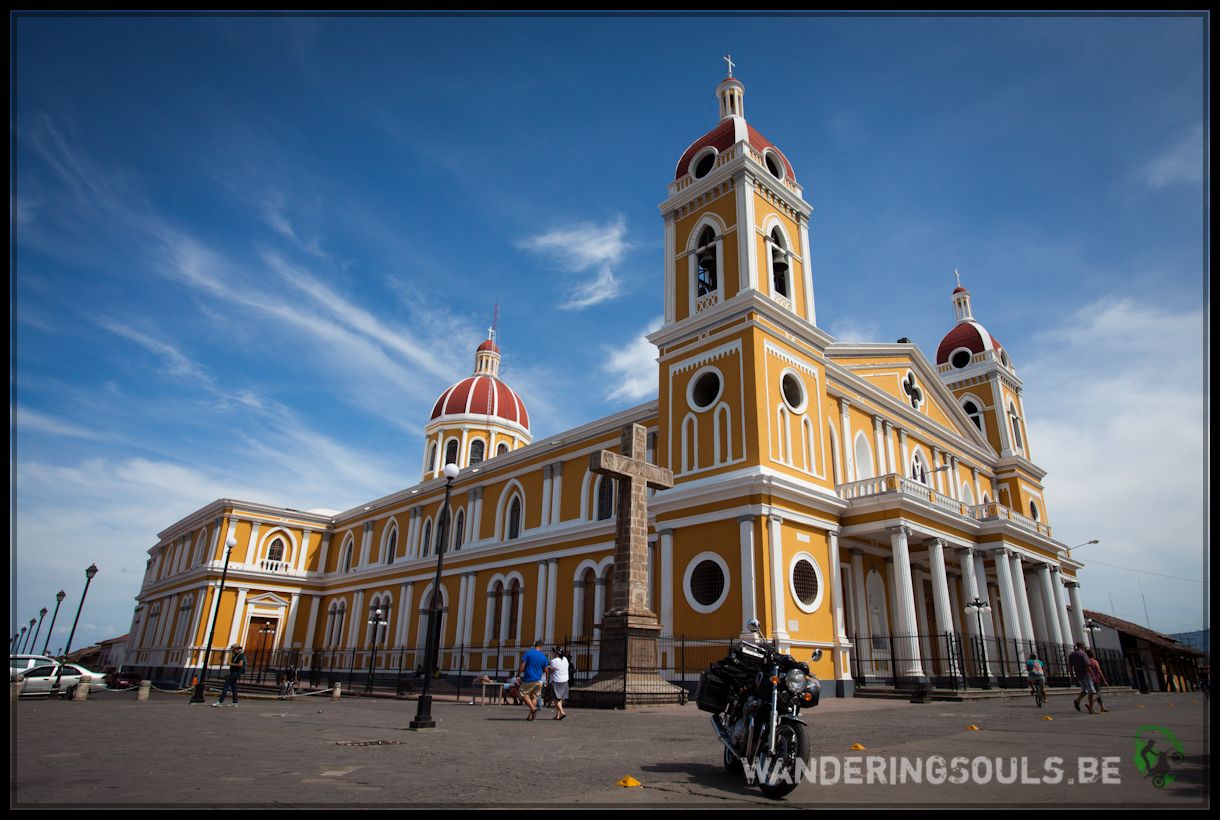 After snapping some more pictures of the beautiful downtown Granada, we found a hostel where we could put the bikes inside (and yes, I mean all the bikes, although this didn’t leave a lot of space for the other guests, but hey who cares right, as long as the bikes are safe).

We had a nice meal in the fully restored pedestrian street of Granada and together with Roel and Azure, we went for a walk to the lake from where we could see the island of Omoteppe while David was enjoying his beer at the local Irish pub. 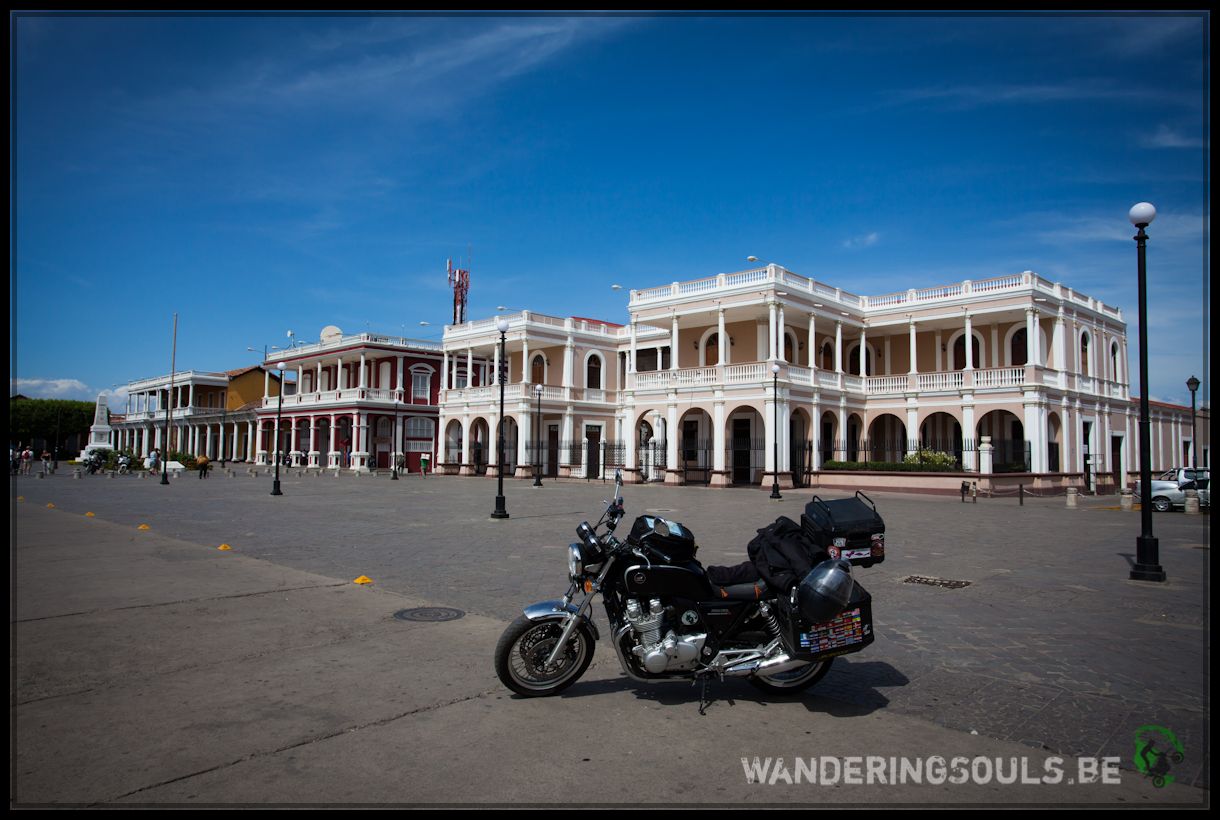 After leaving Granada, we decided it was time to head on over to the coast once again and on the road we happened to pass this happy lot. We don’t actually know if these people live in these carts, or if they were just silently protesting for one or the other reason, but Seb asked them if he could take a picture and they said yes. 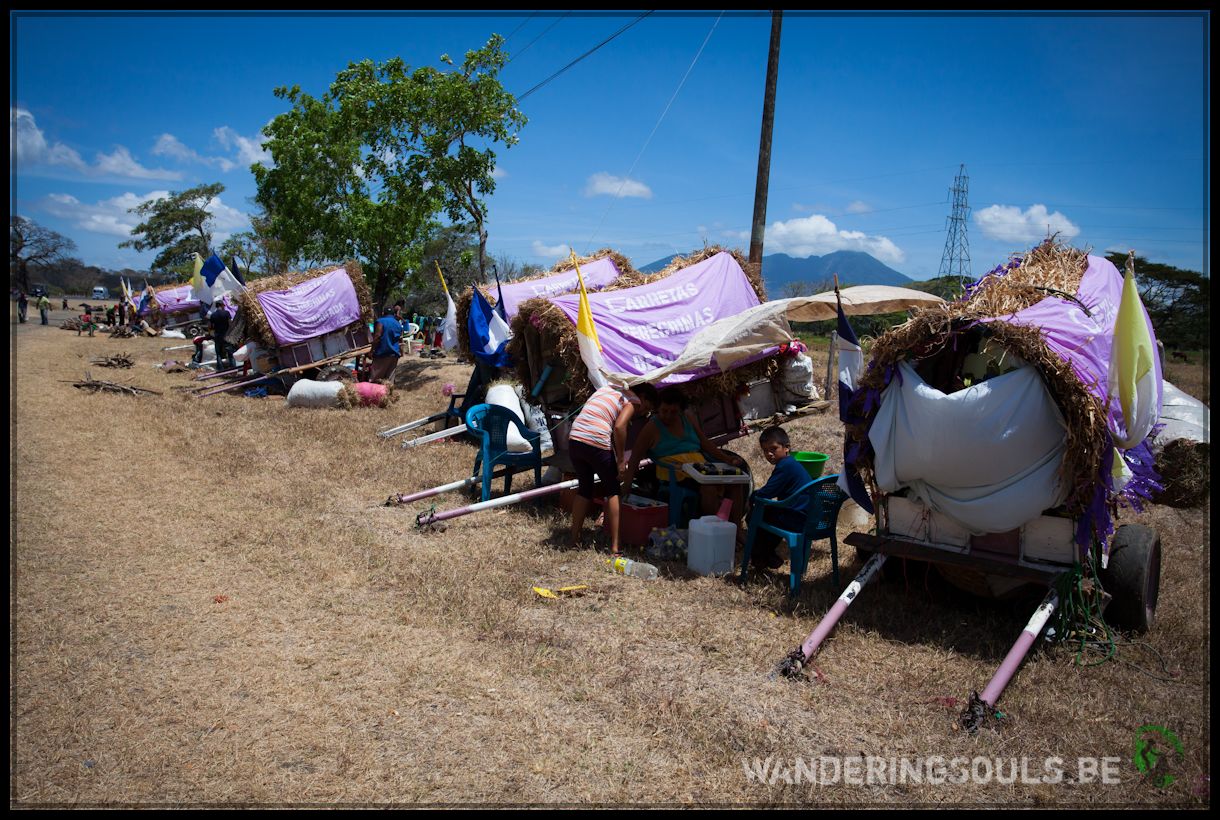 Because we were going to a small place at the beach, near San Juan Del Sur, where we doubted they had food and water, we decided to stock up on everything at a local supermarket and as almost all over Central America, the local paint shop next door was promoting their stuff with loud music and some kind of competition to win some can of paint. Kim is jamming to the beat while Roel and Azure are trying to pack everything on the bikes and David is thinking: “oh man, what have I gotten myself into?!” 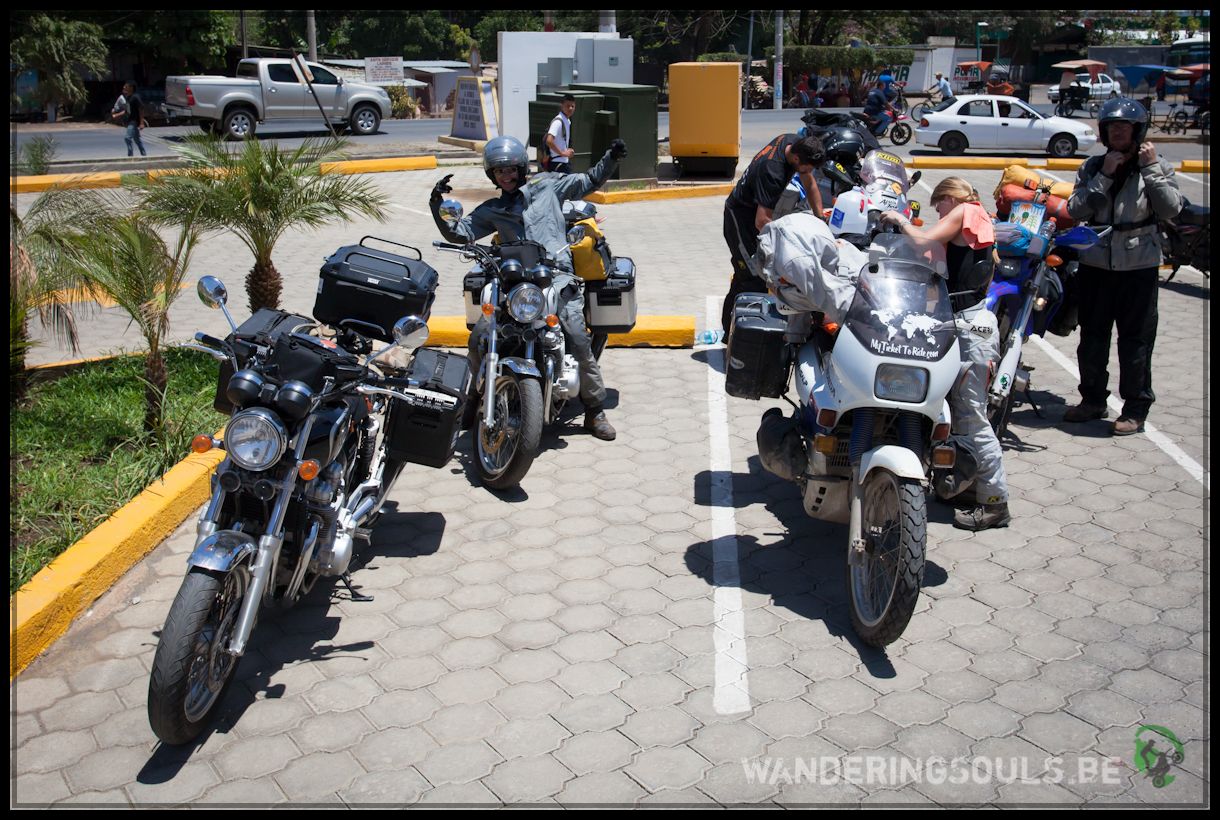 When we stopped at a local gas station Kim was called over by two French guys on bicycles who asked her if she was the woman they had seen on television the other day. At first Kim didn’t understand, but apparently the interview we had given in Leon had already been broadcasted on the television and these guys just happened to have seen it. We still haven’t seen the footage ourselves, but we are trying to get our hands on it as soon as we can. 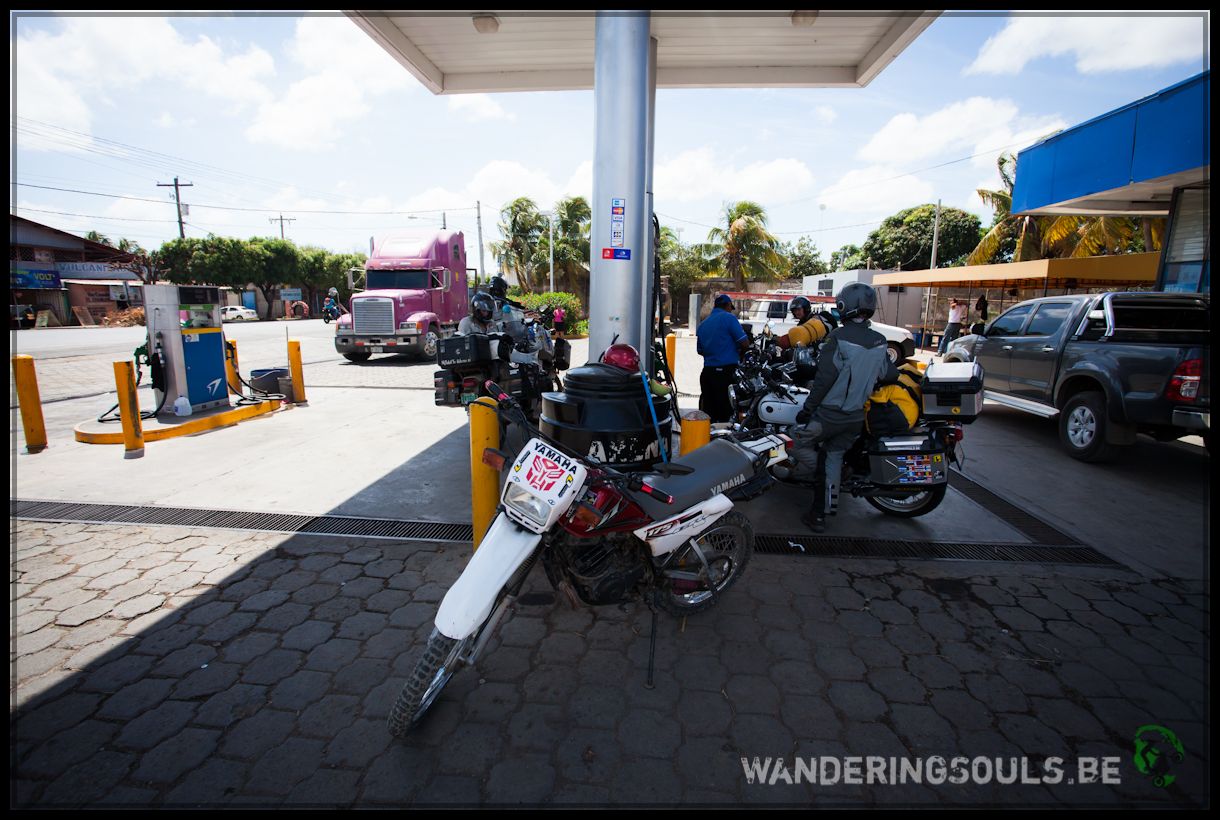