The Wakhan Valley (north eastern part) is really beautiful to ride and to see these huge mountains all around you. The actual border between Tajikistan and Afghanistan is a river, where the current is extremely strong. Since I went illegally to China, I just had to try and do it also in Afghanistan. I was not sure though, as I read somewhere that the river is actually mined and the current is so strong I really had to choose my entry point in the river very carefully. I got out at the other side more than 100m downstream. Here’s a still image of the video I made about swimming to Afghanistan: 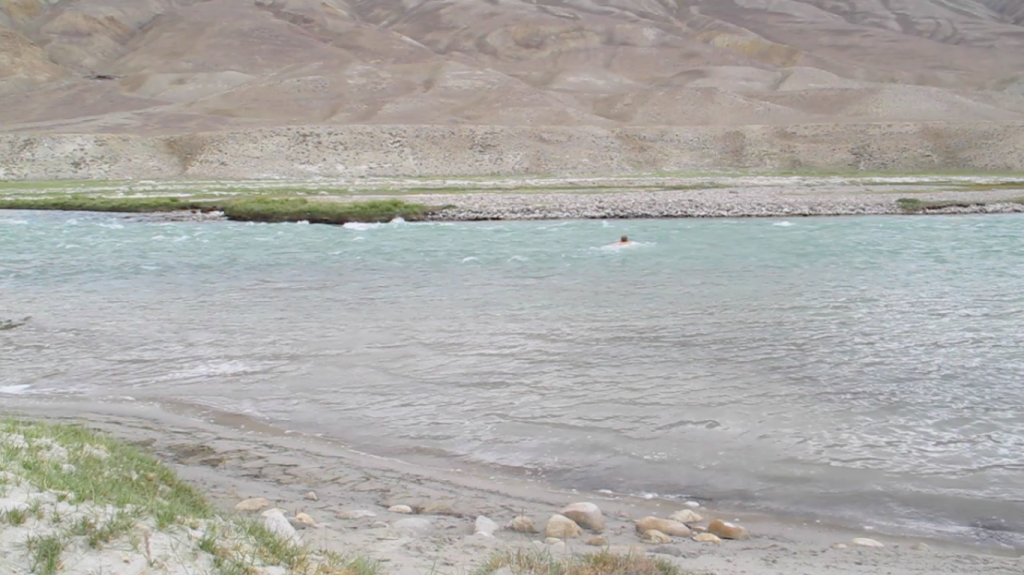 All along the border there are (abandoned) guard towers; 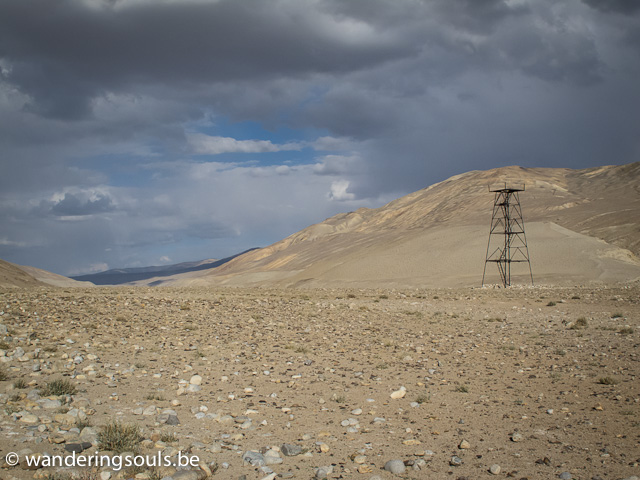 On the other side there was a caravan, and to put things in perspective on the second picture the horses are the small things downleft: 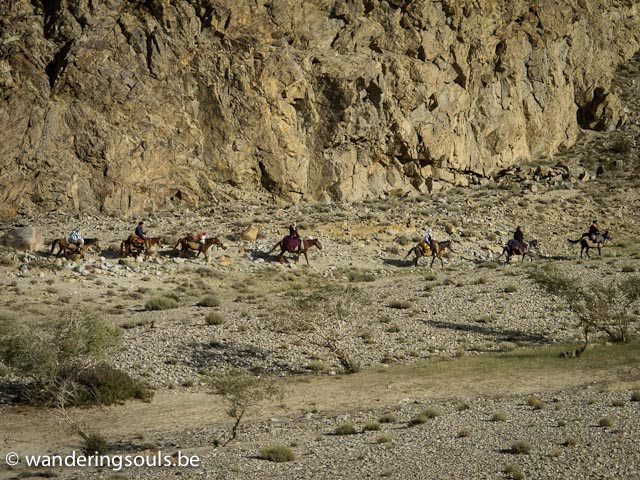 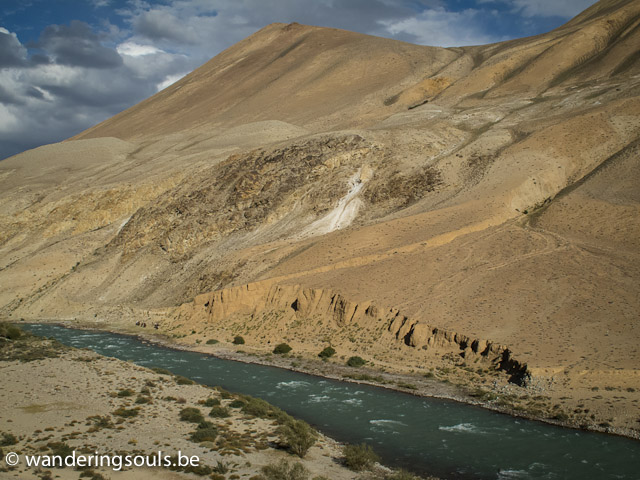 The road continues all along the border, with on the left Tajikistan and on the right Afghanistan. 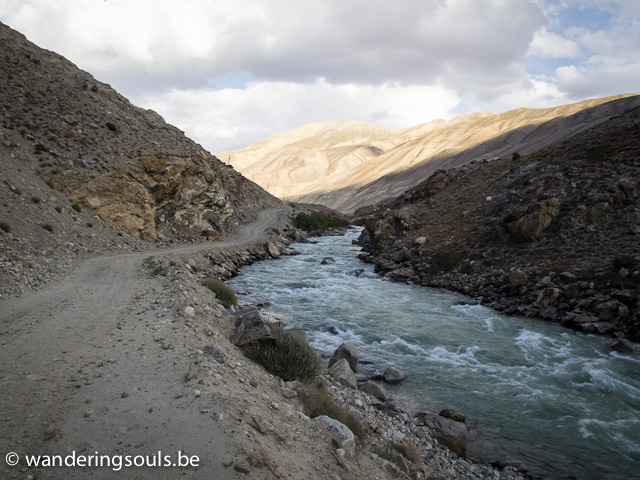 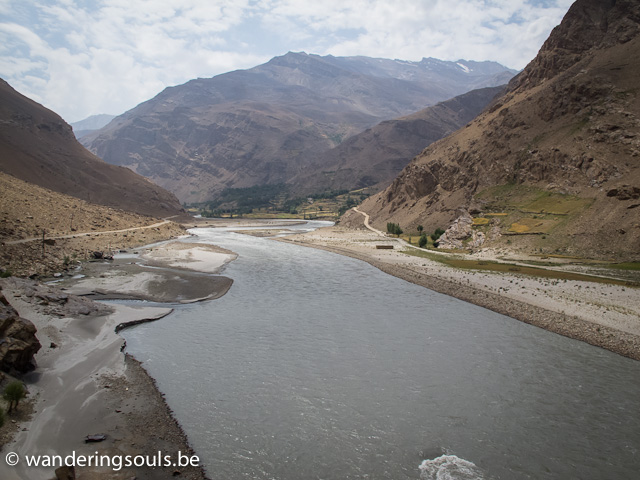 In these two pictures, there are actually 3 countries to see; in the foreground Tajikistan, then Afghanistan and the snowy peaks are in Pakistan. 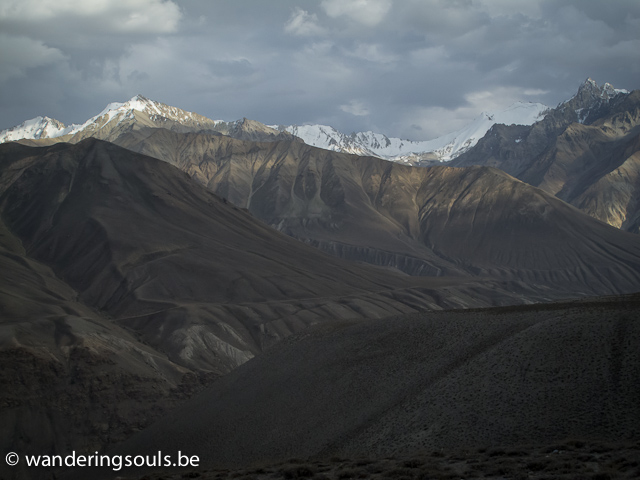 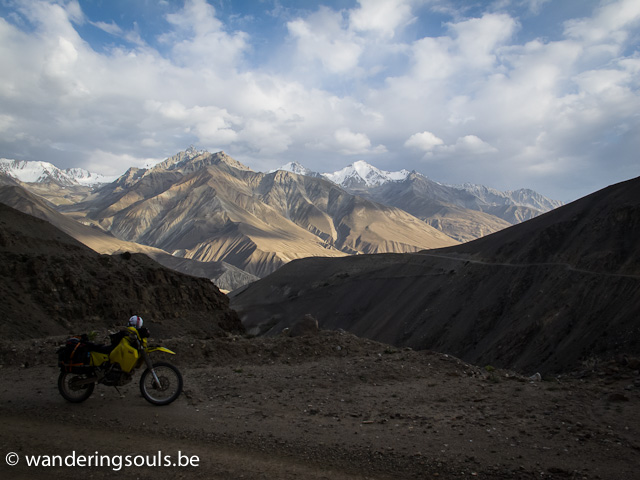 I don’t think he’s going to do much work anymore: 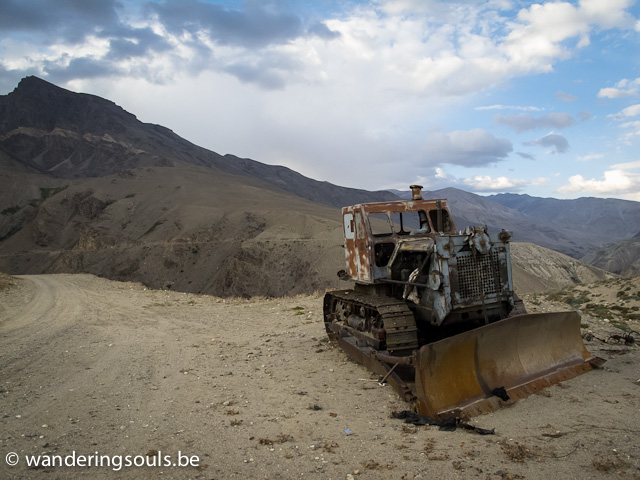 The road descending into the village of Langar: 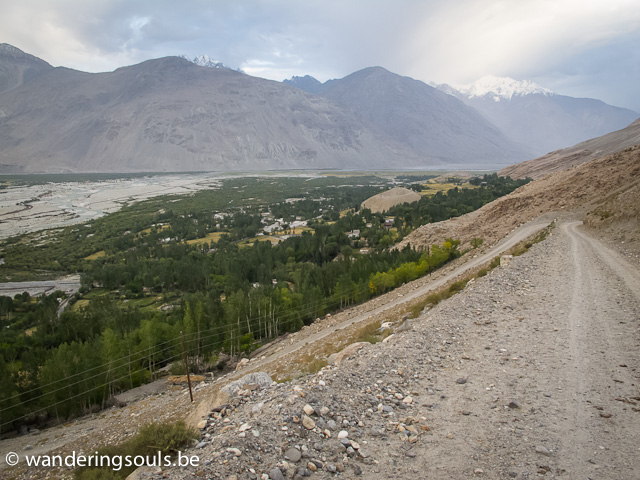 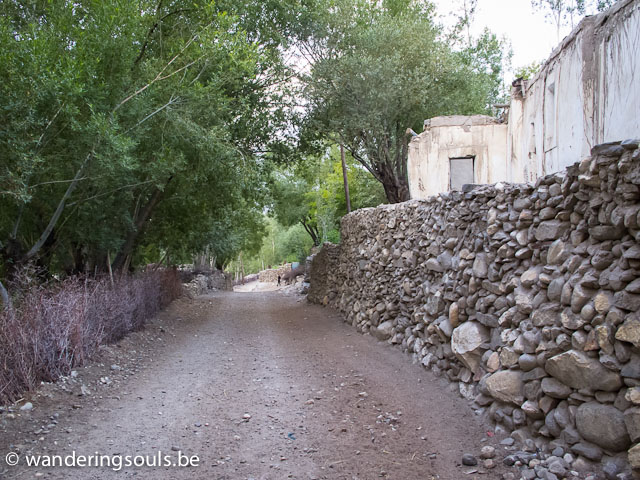 The weather was not terrific, as was the road: 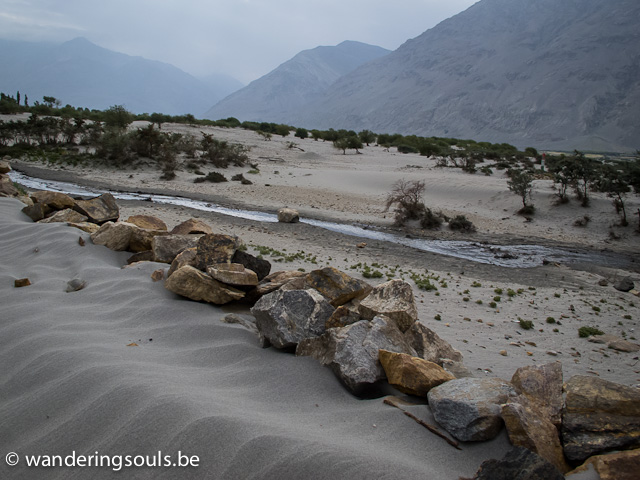 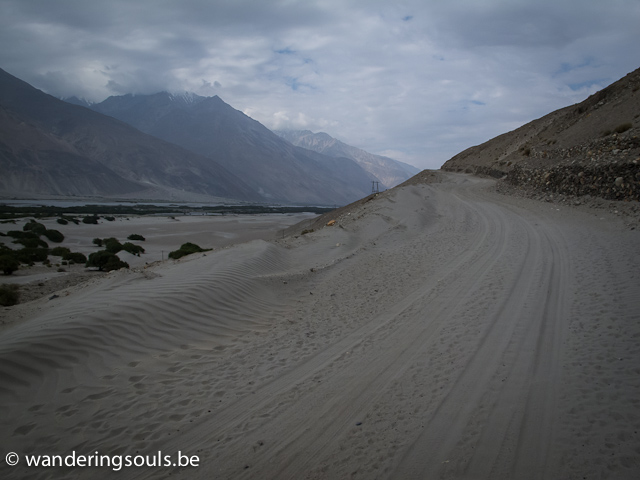 I met these 3 Tajiks and they wanted me to take a picture of them, so who am I to refuse? 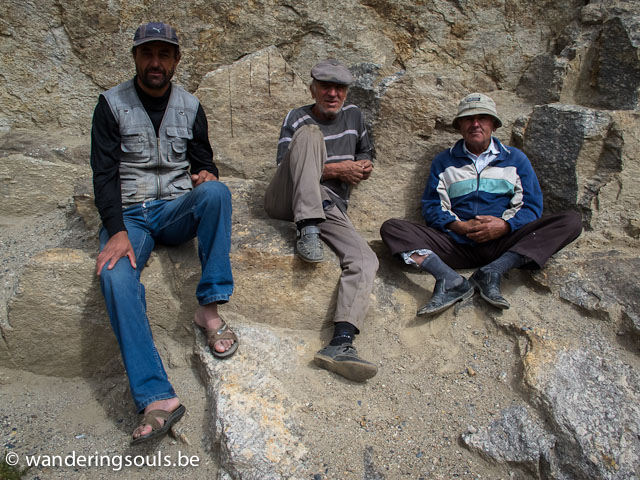 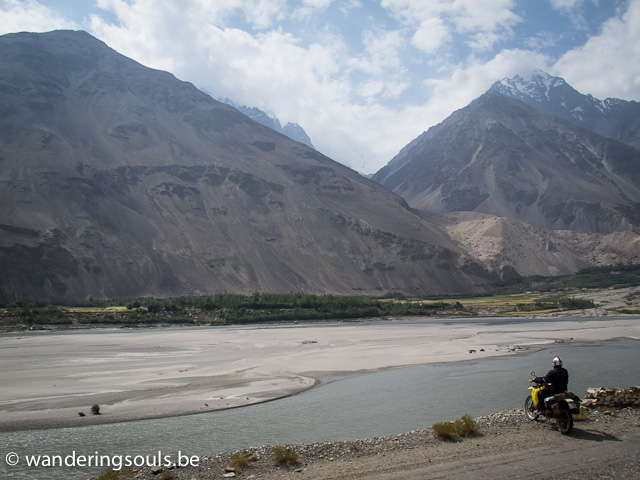 Then I went to the Qah-Qaha fortress, that is believed to be built in the third century BC as a stronghold for the Wakhan. Today there’s not much left of it but enough to get an idea of the might and height of this fortress overlooking the Wakhan Valley: 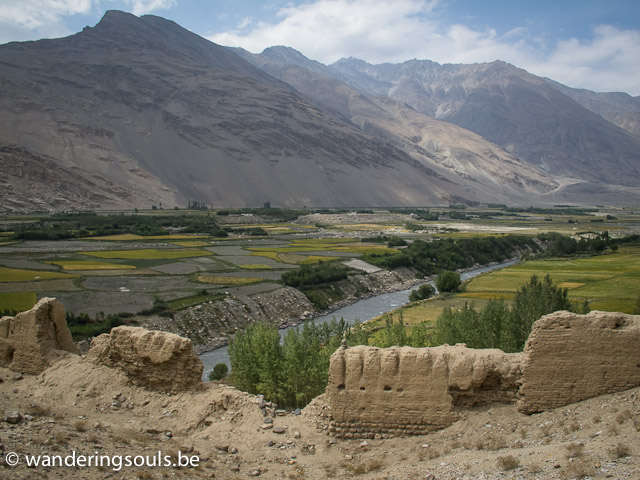 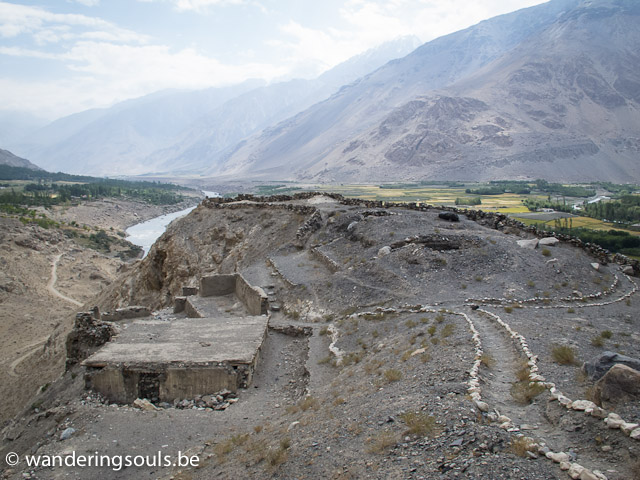 At a certain moment something “strange” happened when I was having a 5 minutes break. I heard like artillery fire and when I finally realized what-where-how I saw the top of the mountain being in smoke where the explosions occurred. I tried to get the camera as quickly as I could out of my bag to take some shots and after a few minutes I saw some Tajik military running towards the position where the explosions occurred. Coincidence? Don’t know, but I didn’t stay to find out… 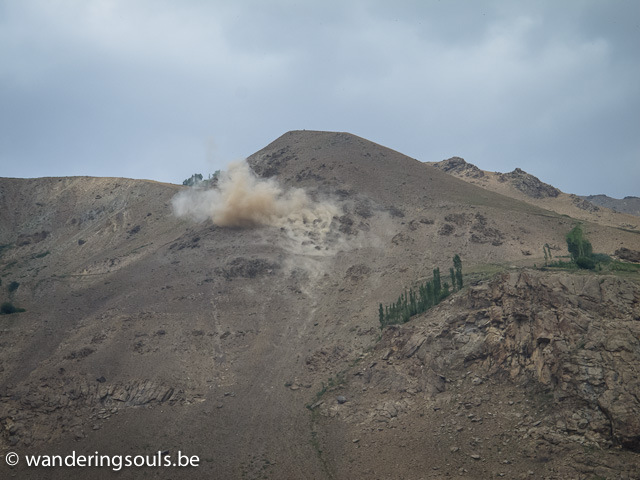 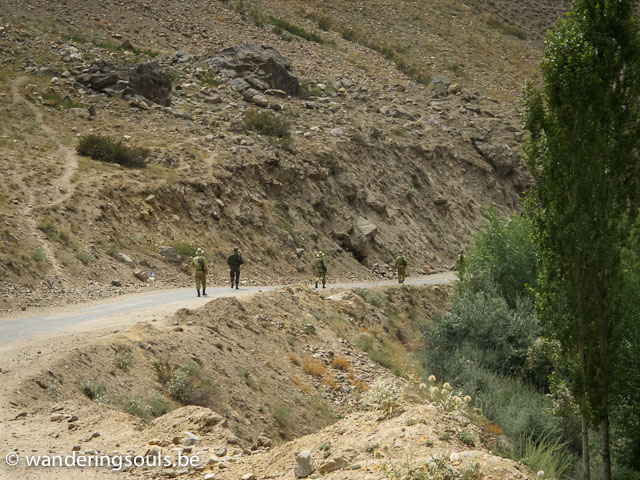 Again, some pictures of Afghanistan: 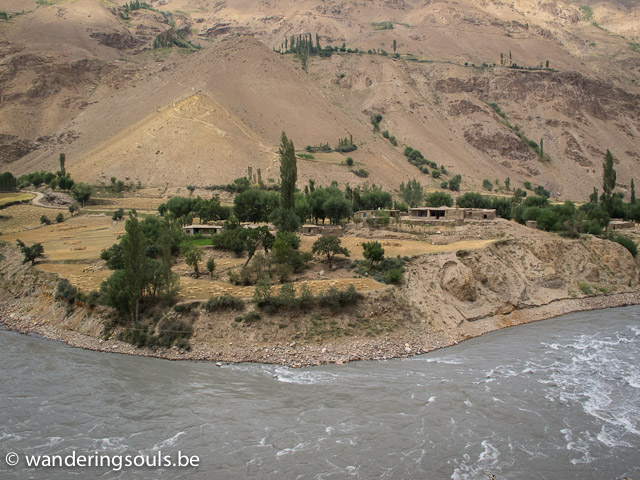 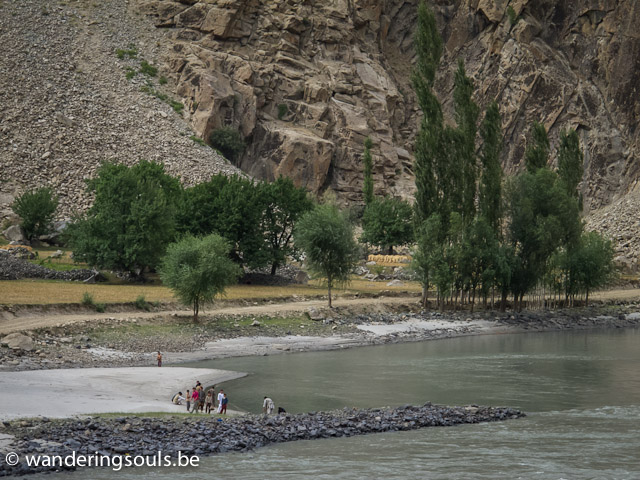 I left early in the morning to go to the cross border market at Ishkashim, where you can leave your passport on the Tajik side and go to the Afghan market, but for some reason the border was closed and there was no market… So a bit disappointed I continued my way to Khorog. I arrived there in the early afternoon, only to find out that the place where I wanted to stay and have a rest was fully booked. And I don’t pay to put up my tent in a garden so in the end I left and continued to the Bartang Valley. The original plan was to go with the bike to Afghanistan. But since the border at Ishkashim was closed and in the meantime I found out I had to pay 130$ for the visa and permit plus another 300$ to take the bike across the border, this was a bit too steep for my wallet. I blame all these NGO’s as they inflate the prices so much when there are NGO’s in an area that for a “normal” tourist this becomes way too expensive. Anyway, I was (illegally) in Afghanistan so we have our sand… And it’s still a special feeling when you wave at them and they wave back, knowing that we all should be aware according to the media that all Afghans are terrorists…

Since the Bartang Valley is something a few people already e-mailed me about (as it hasn’t been done a lot of times before on a bike) I will make a separate post about this adventure (tomorrow?)…