First of all, Kim is better and it was probably, as I thought, the fact that she ate something that was just not right. I presume that the ‘banana-egg pancake’ could have been the reason after having just rice and chicken for more than two weeks… But it’s all over now.

We left Chiang Mai early in the morning to take for the third time the train in Thailand this vacation. And we were ‘prisoners’ of the train again for more than 13,5 hours. They do stop in some stations, but only very very brief, so I was thirsty and made a run for it… The trainlady was looking at me like “what the hell are you doing” and the lady at the sellingpoint was like “hurry or the train will leave again without you” expression on her face. I just took two small bottles of drink from her fridge, threw too much money on her counter and made a run for the train again…just in time! The trainlady gave me a look of “never do this again” but I didn’t mind, I had some nice cold green fanta!

Going to the toilet on a Thai train is also an experience… in some ways even more difficult than on a Sri Lankan train. The Thai train wobbles a lot more, and since it’s not just a hole in the floor but a genuine French toilet, you have to dodge the water mixed with other fluids, especially on flip-flops, try to hold on yourself and try to hold on your pants. Kim was not really in for that so she walked the whole train to find a real toilet, which she found, but then not at the expense of some bruises. For some reason the doormechanism with the big green button and Kim did not really go along. Twice when she passed the doors they just closed on her… so first time her legs got stuck and the second time her upper body… and the doors are quite hard and close with some power, bruises… So know you know, it wasn’t me who hit her but a genuine Thai traindoor!

I asked the conductor in my best Thai if I could take a picture of the control panels of the train, and he said yes, with a big smile. As you can see, it’s state of the art technology: 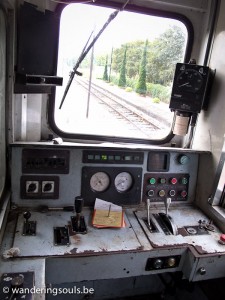 When we finally arrived in Bangkok it was rather late and some people were just tired of waiting I presume, so they’re just having a rest on the floor: 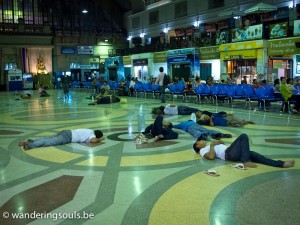 We took a tuk-tuk from the station to our guestroom after bargaining over the price of course and we found it really easily. The next day we went for our first walk in Bangkok, and it was interesting to see that the police were conducting exercises on the street instead of in a closed environment; how to search a man: 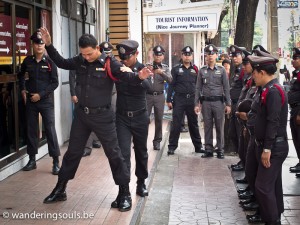 And just around the corner you can buy any fake documents you want: 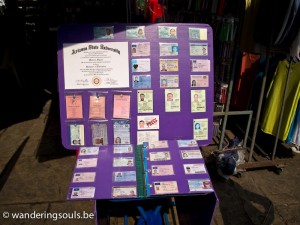 Then a bit later we got harassed by two ladies who wanted to give us, or rather force us to take, some corn to feed the pigeons. Of course I knew we would have to pay for this service, but then I thought it would make up for a nice picture, so why not: 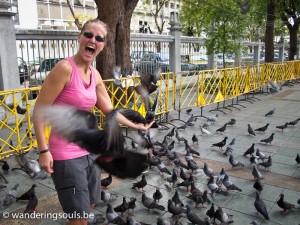 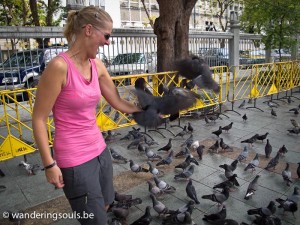 Of course, as they forced us (and I really mean ‘forced’) into accepting their corn and feeding the pigeons, they wanted way too much money, so I just gave what I though was right for the 5 seconds of ‘fun’ Kim had. They wanted 3 times what I gave them and we just walked away… with them almost chasing us to get more money out of us. We just ignored them and after a few meters they gave up. A bit further there was a poor lady begging for money, and as I knew the two ladies were still looking at us, I just gave money to the poor lady sitting on the floor, first because I felt bad for her and secondly just to get the first two angry… I don’t like to be forced into a position.

Then followed some more sights, temples and other places of interest: 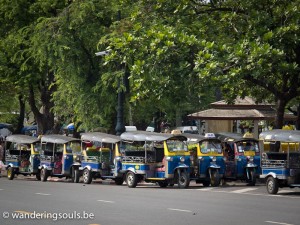 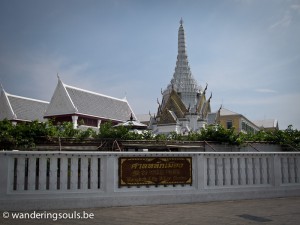 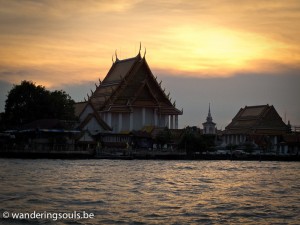 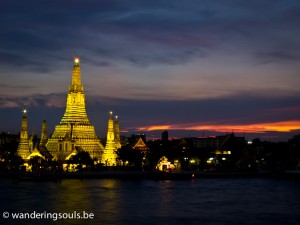 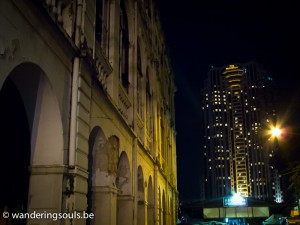 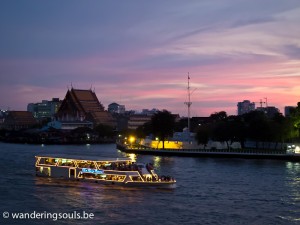 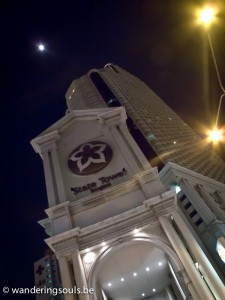 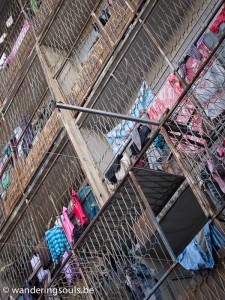 Although the pictures are doable, I really, really miss my big DSLR on this trip (and the previous one for that matter) so I decided that whatever it takes, I would carry the Canon 5D mkII with me the next time. It is just too frustrating not being able to take certain shots I really want to take as the G12 is good but of course not that good when you compare both of them. 480€ vs 3500€ is of course comparing a Lada to a Porsche, but still, the Lada manages, but I prefer the Porsche… 😉