Ok, so we had to cut our trip short but this didn’t stop us from doing the things we love so Seb managed to get a test ride with BMW’s R nine T. This bike put a smile on his face from the moment he stepped on, until the moment he stepped off, the only downside was its price… But for being a 2nd or 3rd bike in your garage and if you don’t mind the price tag, great! 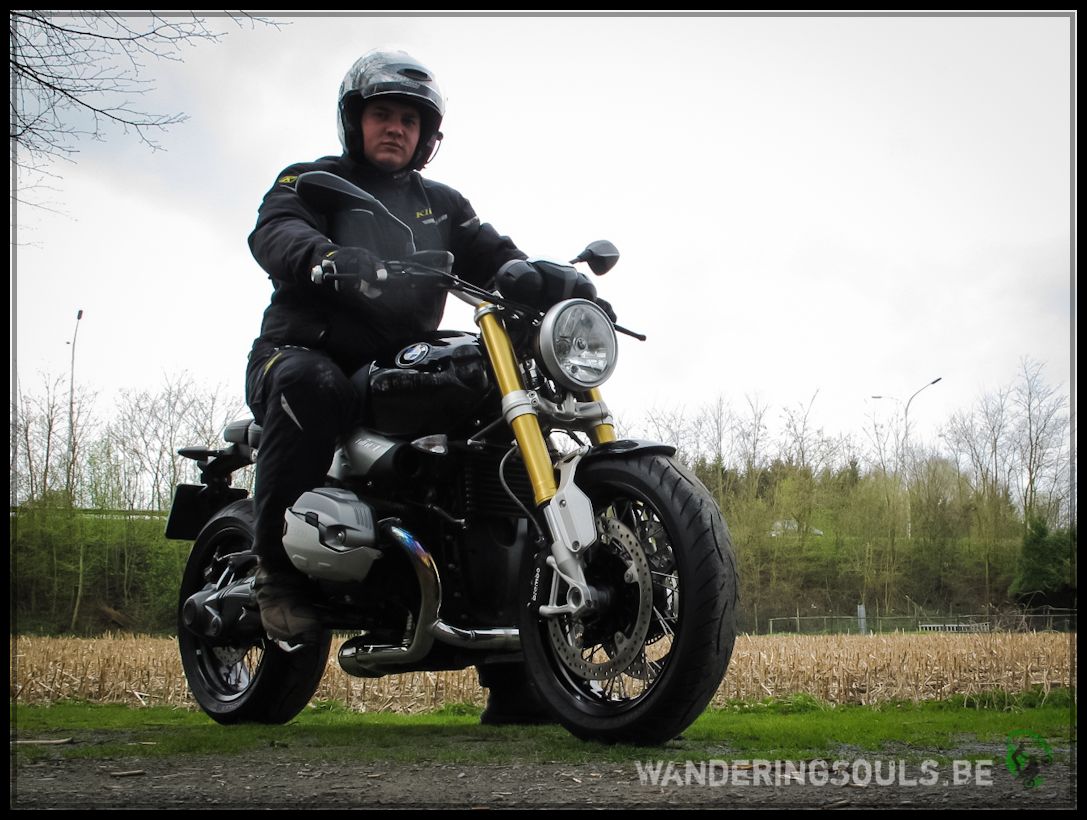 Belgium being Belgium he had some shitty weather while testing the bike, but Seb didn’t care and he even took his time to take some pictures of this awesome bike. This model is just all engine, but it suits the bike. The bike is very different form the CB, so for me they don’t even belong in the same category. Yeah, they are both nakeds, but the CB is a proper retro bike while the R 9 T is more a new bike with the looks of a retro bike. In any case, loved the horsepower and the sound, but the one hour ride couldn’t convince me at the moment to have this as my number one bike in the garage… 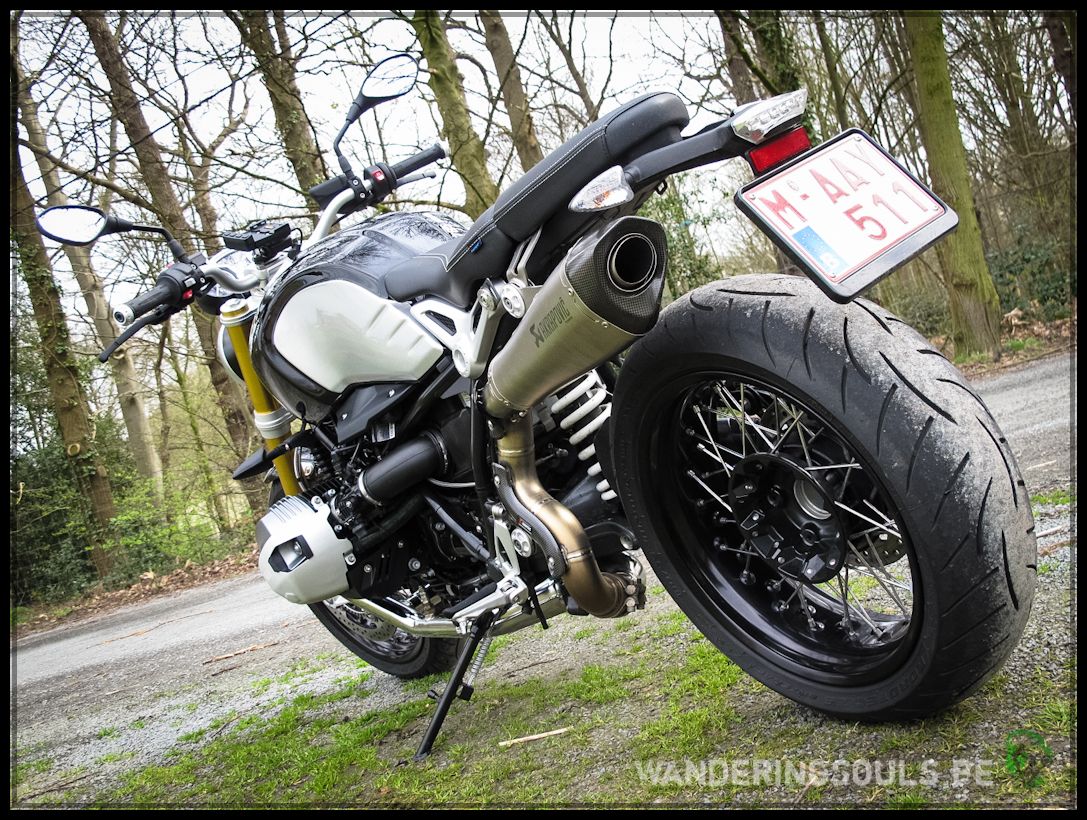 After some long delays, the day finally came for us to go and get back our own two sweethearts from the boat. Seb had to send tons of e-mails to get everything in order and it was a real pain in the butt, but finally they managed to clear the bikes and we could go and get them in the port of Zeebrugge. First the Belgian Customs wanted to see the bikes and then it appeared that there was a  paper that the shipping company needed that was still in Panama but after being persistent and a few phonecalls they released the bikes, finally, more than a week later.

Or, maybe it took so long because we didn’t put enough stamps on the bikes… and yes, getting the sticker of the tank was definitely not a laughing matter!!! Damn you Panama port! 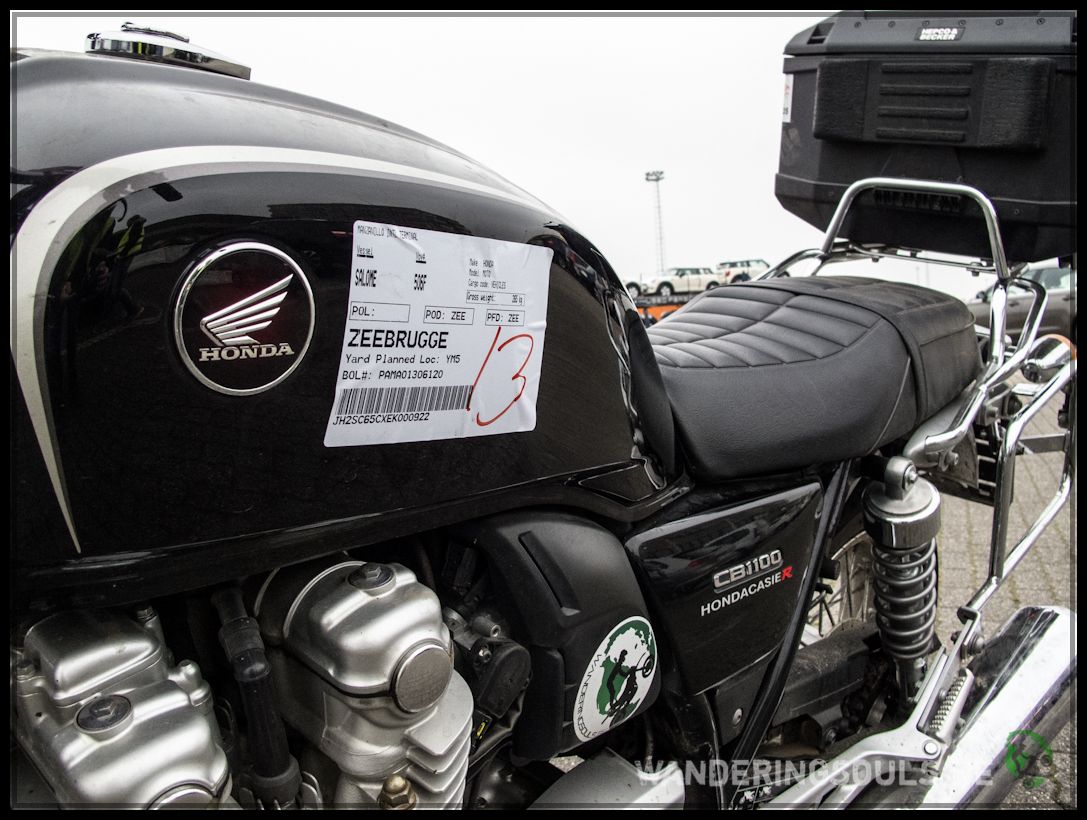 After some long debating, we decided it was time to say goodbye to the bikes and sell them. The reason being that Kim’s back isn’t improving at the moment, that she also decided that she wouldn’t do long distance rides “for the moment” and that with the next chapter of our lives it doesn’t really make sense to keep the CB’s for the moment. We’ll explain this more in the next update, the short version: we’re moving out of Belgium…

The bikes had done their job really well and we still love them, so we wanted them to have loving new owners. We gave them a well deserved sponge bath and shined them one last time before handing them over. We had the bikes from the port on thursday morning, cleaned them over lunch and Kim’s bike was sold in the afternoon and Seb’s bike the next morning. So all in all, pretty fast! 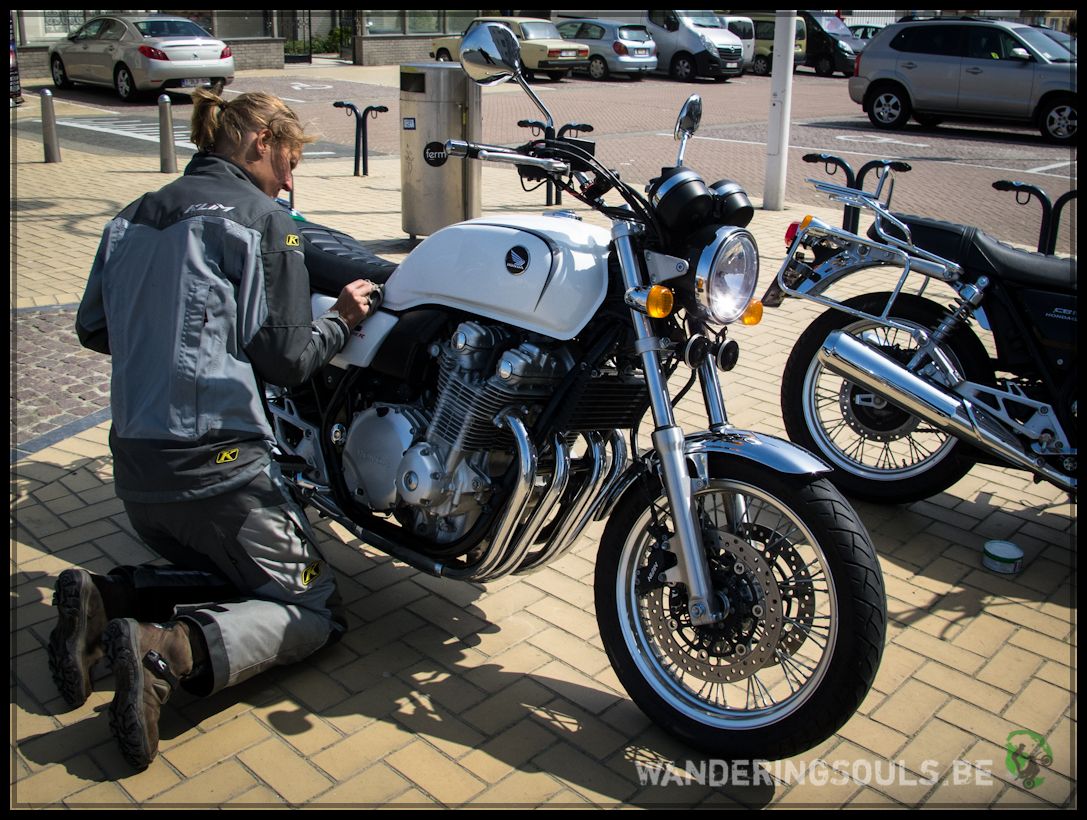 Kim’s bike went to Johan, who has been passionate with motorcycles for a while now and just fell in love with the shiny white Honda. He promised to love her and treat her right, so we “married” her off and kissed her goodbye. 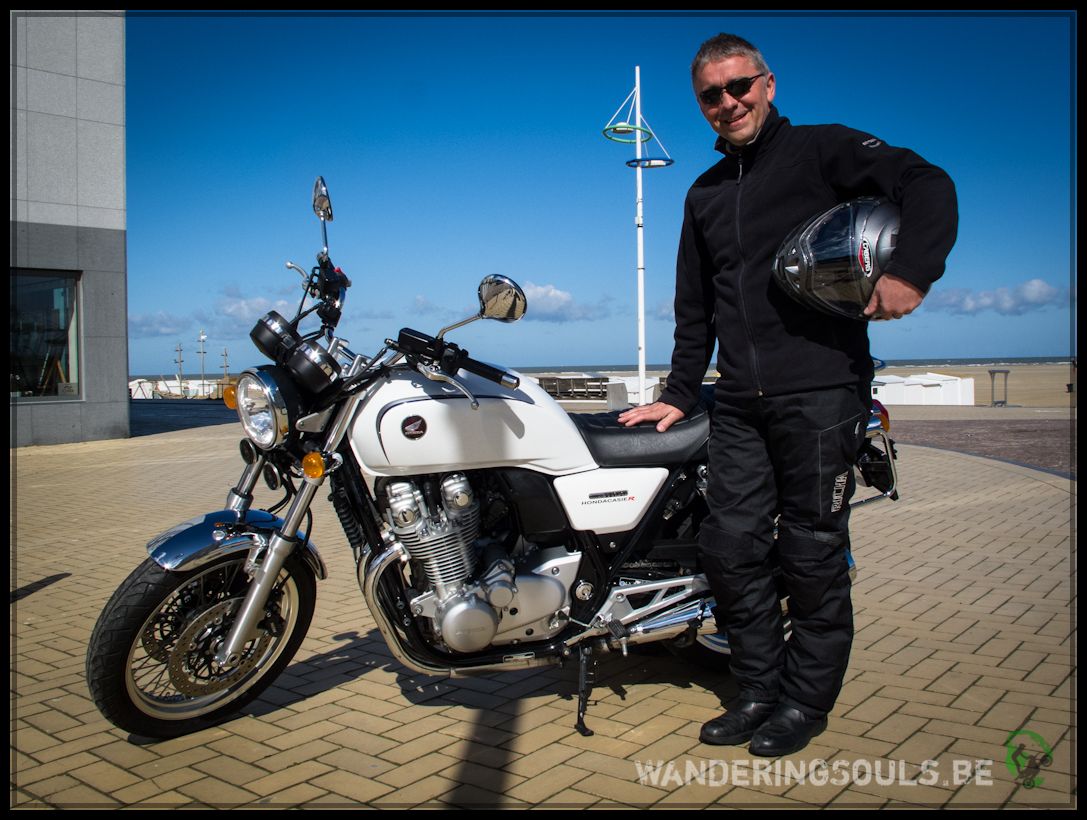 Seb’s bike went to Tom who also promised to love the bike and take her on a trip to the Belgian Ardennes as soon as summer would come around the corner. 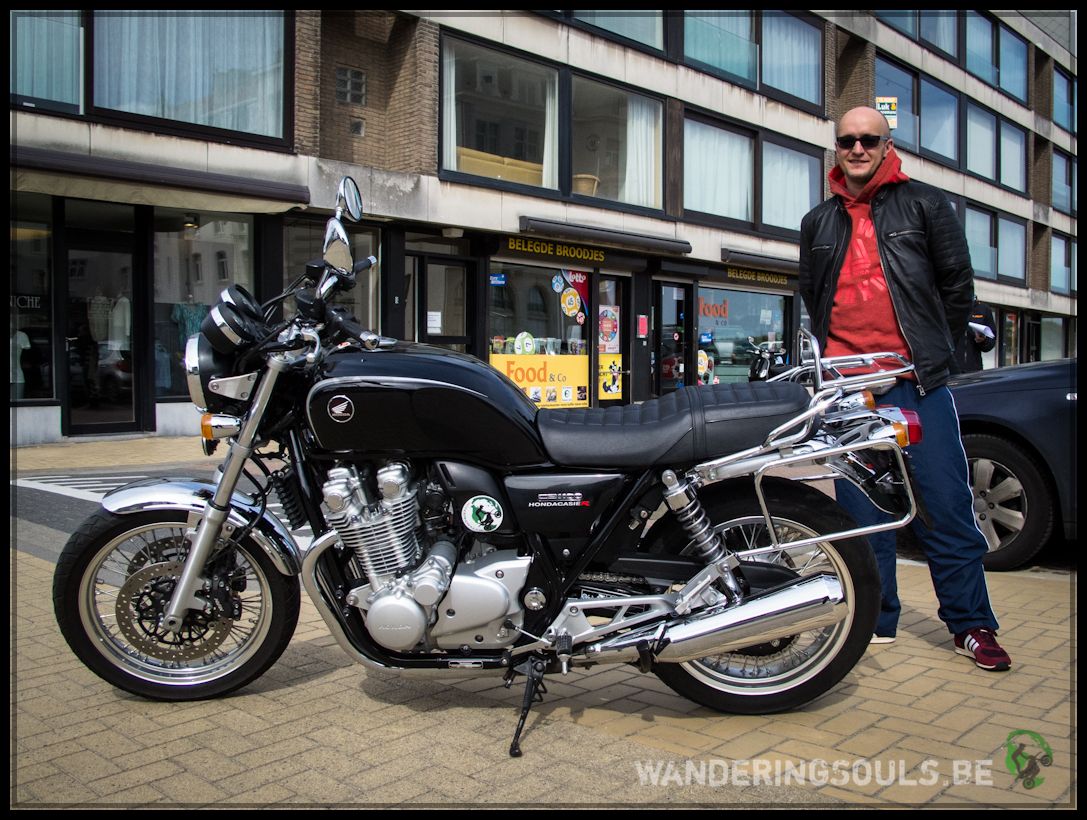 Both men said that we were welcome to come and have a look at the bikes if we would be back in Belgium one day, so we probably will.

In the meanwhile, we still had to stay a while longer in Belgium before we could go, so we decided to meet up with Seb’s old biker club. Some of the guys we hadn’t seen for more than 10 years, so it was nice to meet up again. Ton and Anneke were so kind to organize a barbecue at their place and even the weather was warm for once. Everyone of the old members were there and they all brought their children (7 in total between the ages of 1 and 5 years old) so we had a very lively bunch!! 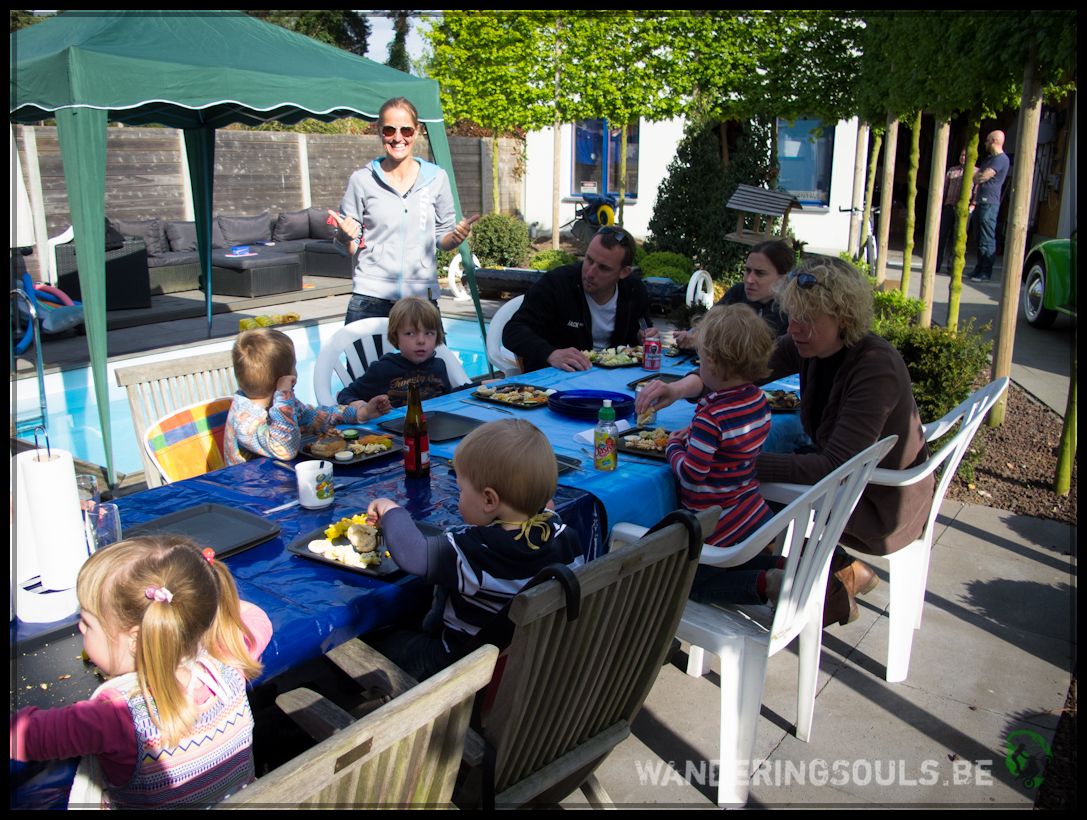 Oh yeah, the back injury was just a cover story since we had to come back because Kim is a mommy and Seb is a daddy now… look how fast they grow! 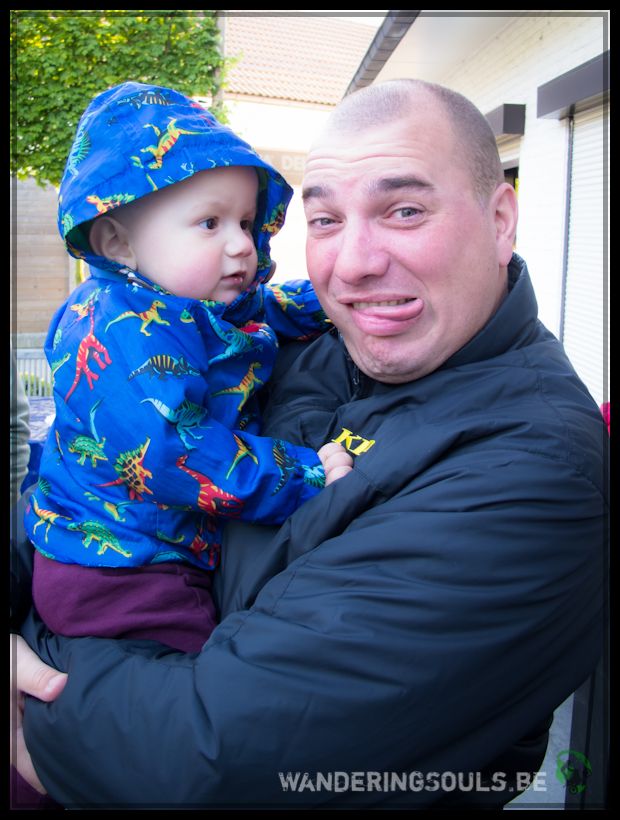 Seriously, that kind of life is not for us.

Anyway, later this week we move out of Belgium, so the next update will be from another place (nothing new there), but one we’ll call home for a while. We’ll tell you all about it but that’s for the next update.