In the evening after meeting up again with Cristina, she took us to a local procession called: viacrusis de la iglesia de virgen de las dolores. A bunch of men gather together to carry a statue of Christ around town. The whole process is timed to the second and the statue is changed between carriers a few times on the route. This one in the picture is heavy, but the one we saw a day later was even heavier and it took a whole lot of people to just support it. 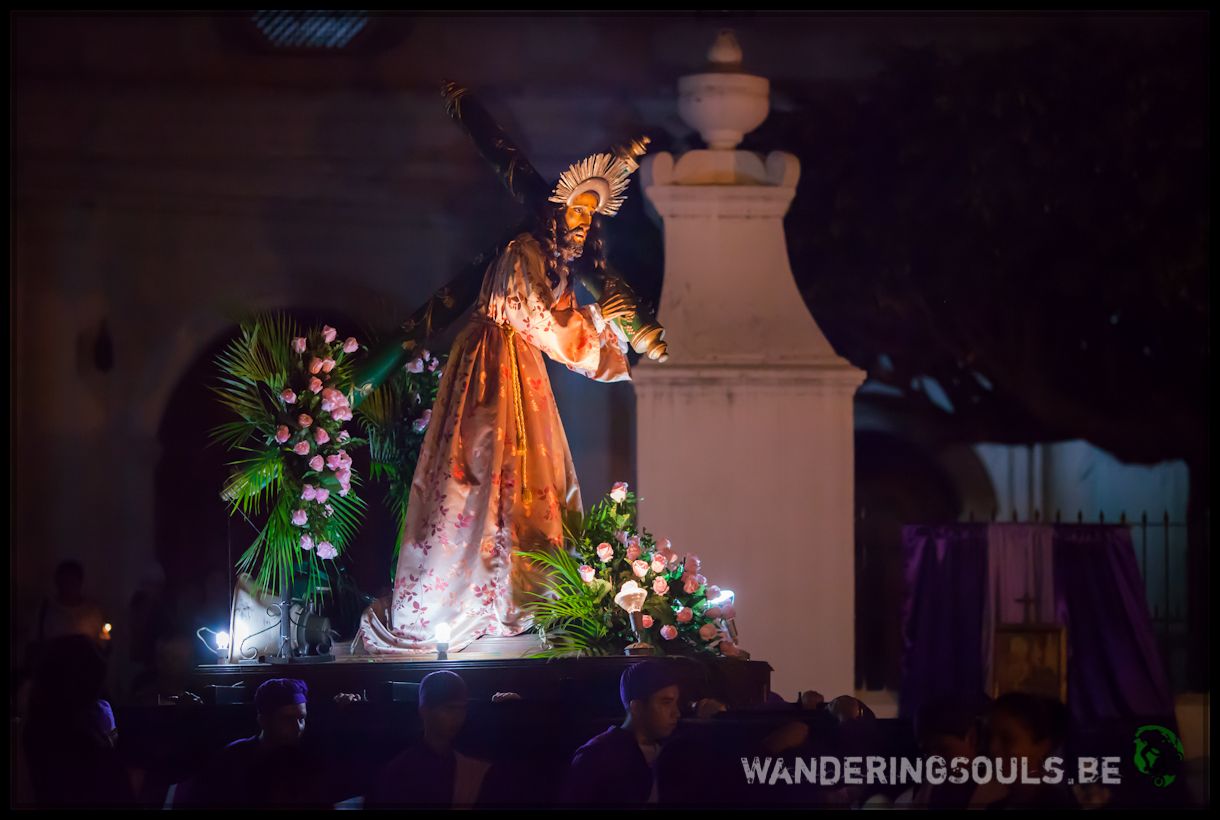 I guess this guy is reading the script for the procession so that everything goes according to plan. 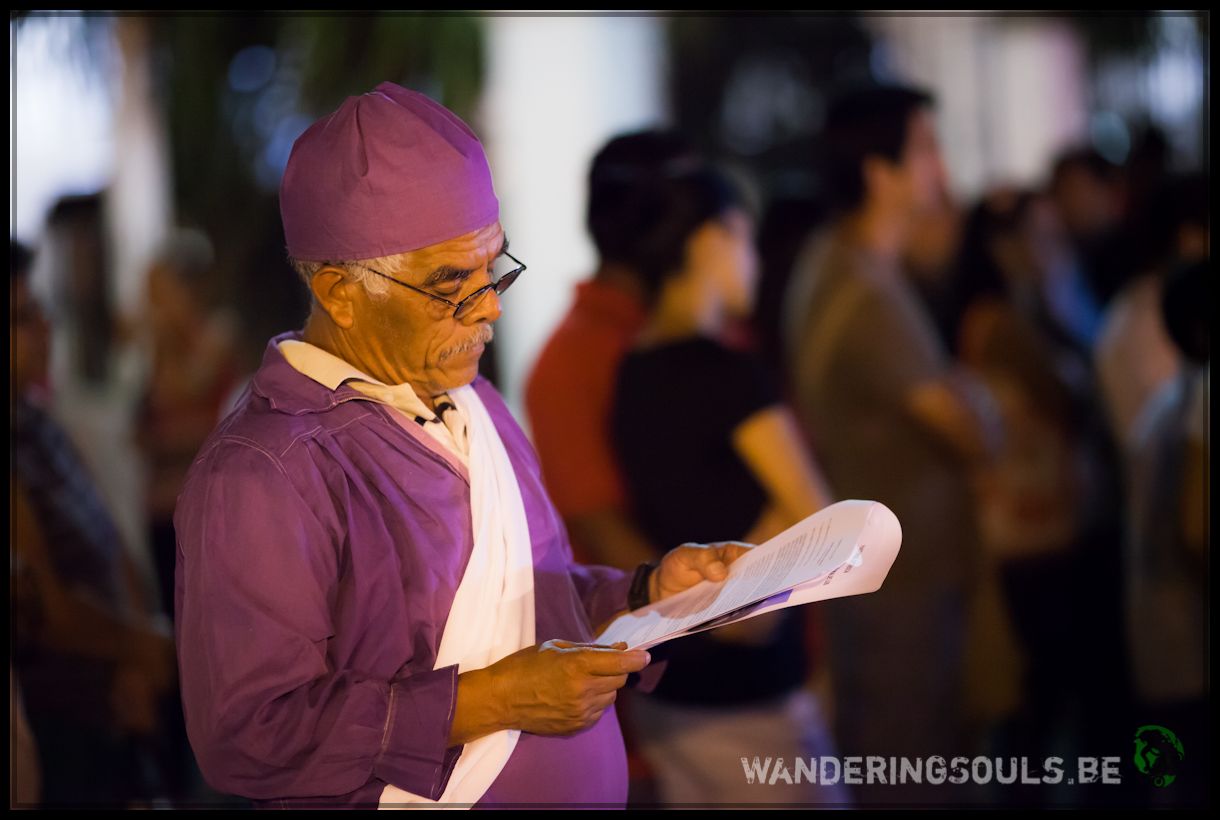 There even is one procession where they only let children partake, but here they just walked along or made sure that they did a splendid job with the incense. 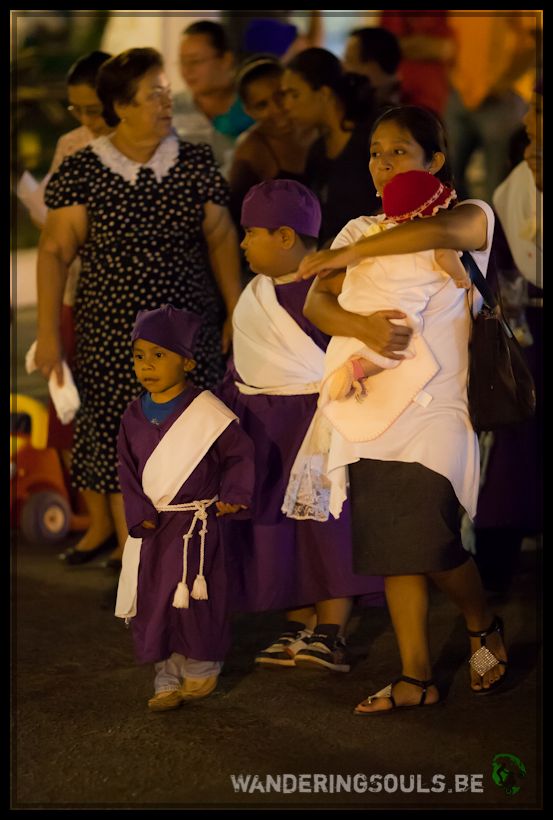 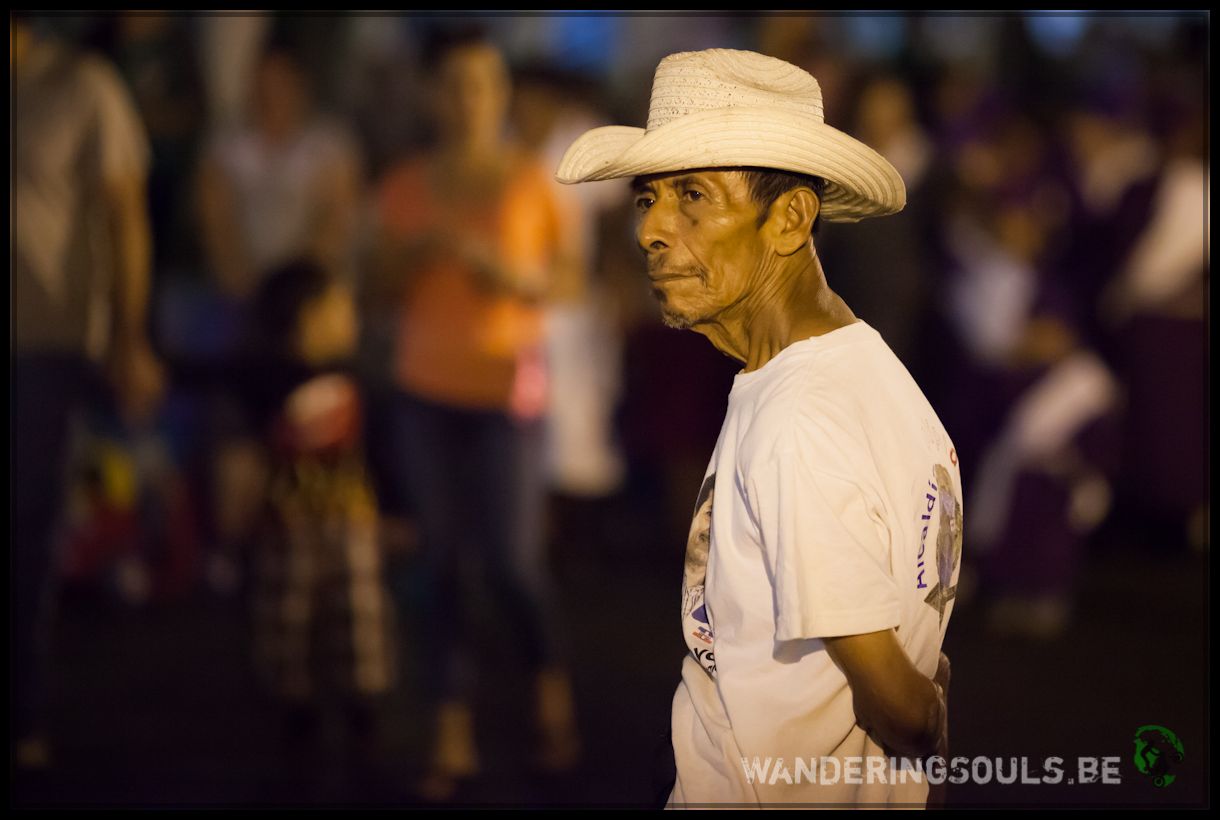 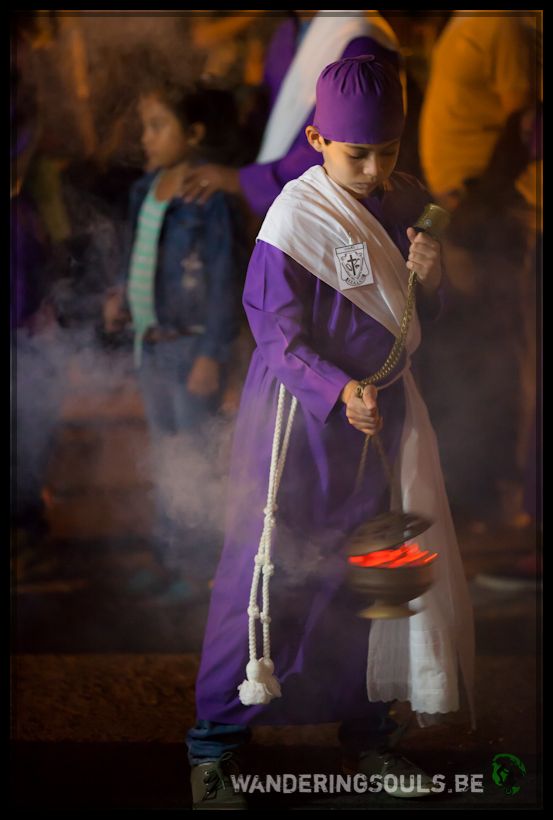 The next day we rode around all day with Cristina, Ale and Danilo and visited a lot of places where we went for a walk, had some lunch or just wandered around for a while. We went for a walk around the laguna verde in Apaneca and enjoyed the peace and quiet for a while. 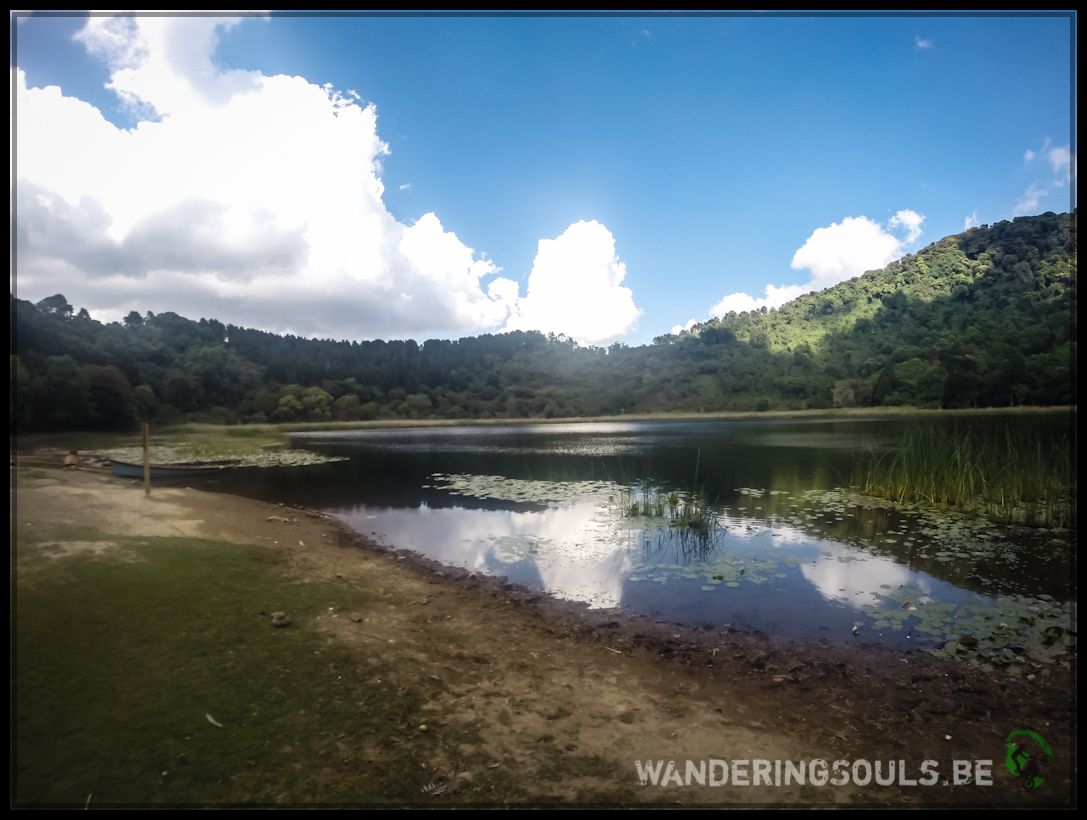 Juan Carlos had to work all day, but in the evening we decided to have a barbecue at Danilo’s place, so we went to the store to buy some meat and Ale said that he would cook it for us. He fired up a wood burning bbq and cooked the meat on it, while Danilo was looking worried the whole time, asking: “Ale, don’t we need to put on some charcoal on the fire, Ale is the fire hot enough, why is it taking so long…” In the end, after almost one hour, the meat was ready and when Ale got us to taste a bit, we were all amazed at how good it tasted! It was one of the best pieces of meat we have had in a long time.

For dessert, Danilo’s mother had some real chocolate from local beans and she prepared a natural hot chocolate for us. We must say that it tasted like nothing we ever tasted before and it was good! Coming from real Belgian chocolate lovers, that says a lot! 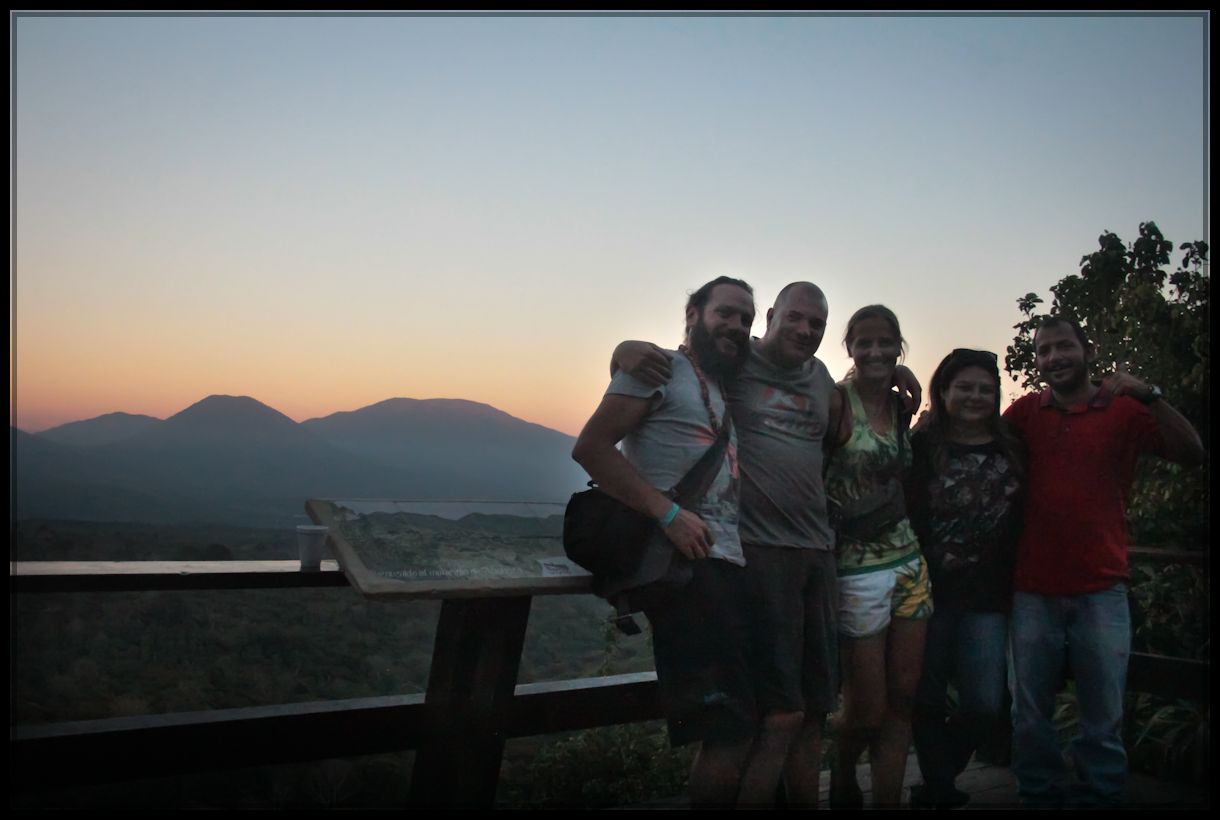 On our last day together with everyone, we decided to go for a real off road 4×4 adventure in Juan Carlos’ Jeep, but before we went for a ride, we had to strengthen the inner man/woman, so we bought some orange juice and sandwiches and had an awesome breakfast! 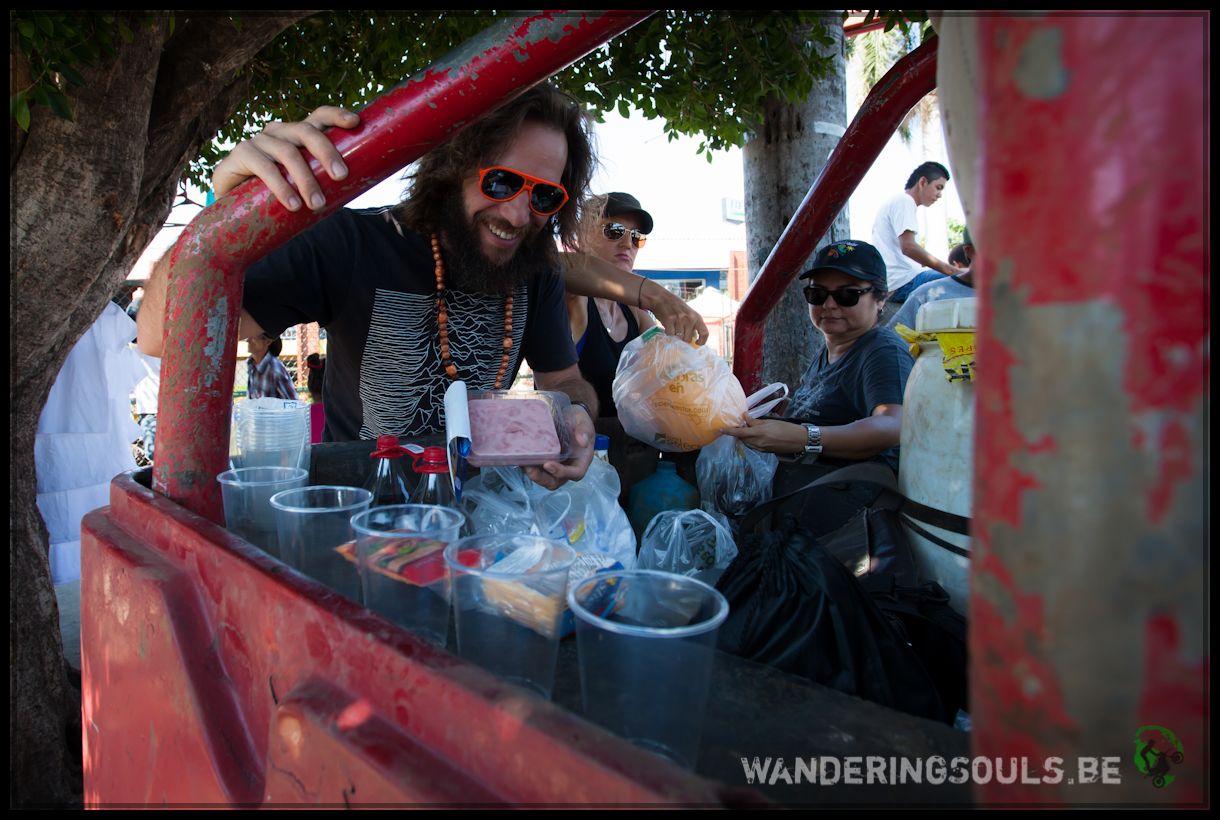 Ale and Cristina taking a ‘selfie’ while Seb is taking a normal picture. 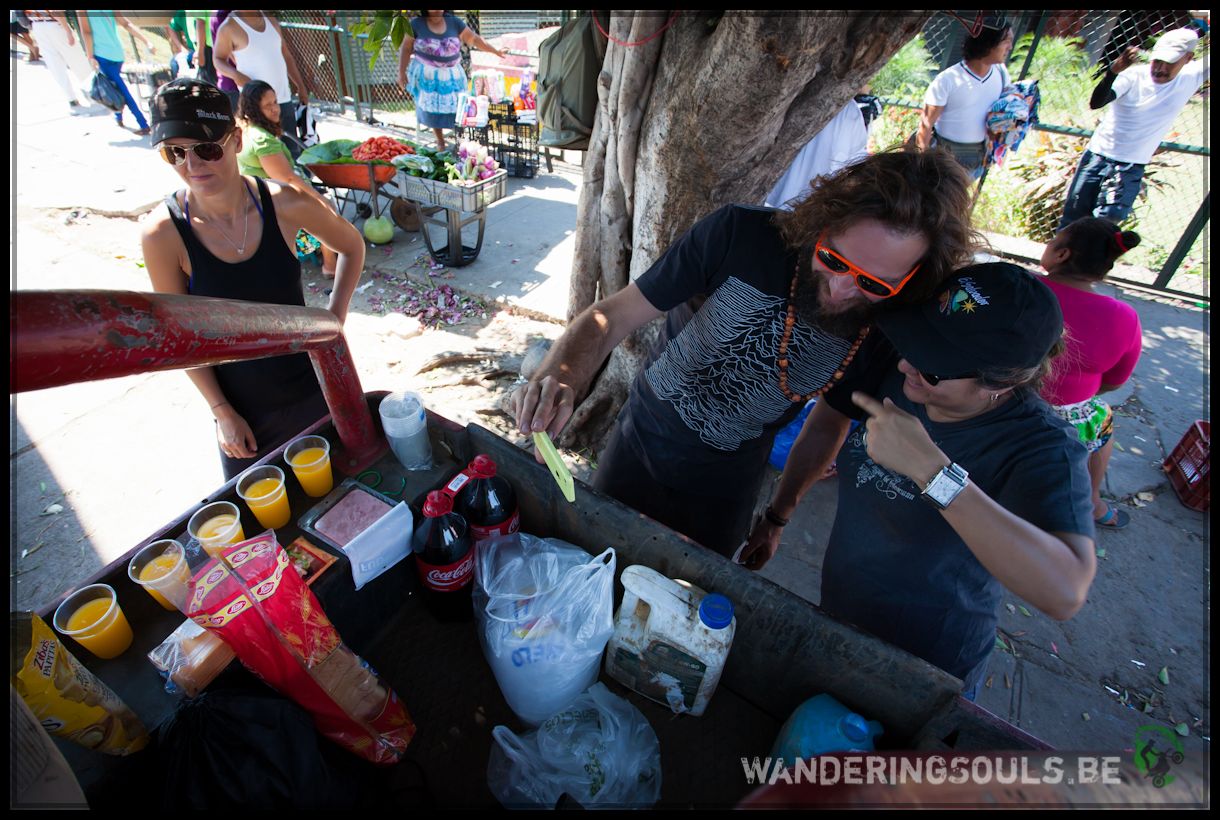 The place we finally rode to was a natural crystal blue lake at Estanque de comalapa, with all the friends of the 4×4 club. The lake itself has a natural origin and the water comes from down in the ground and this is why the water is crystal blue and very pure. Seb and Kim went in the water to have a swim and when Seb put his feet on the ground he felt a whole lot of fish begin to suck at his feet. It caused a tingly sensation and it tickeled so much that Seb had to lift his feet of the floor. In other countries you would pay a lot of money to get these type of fish to eat away your dead skin, and here it was all for free! 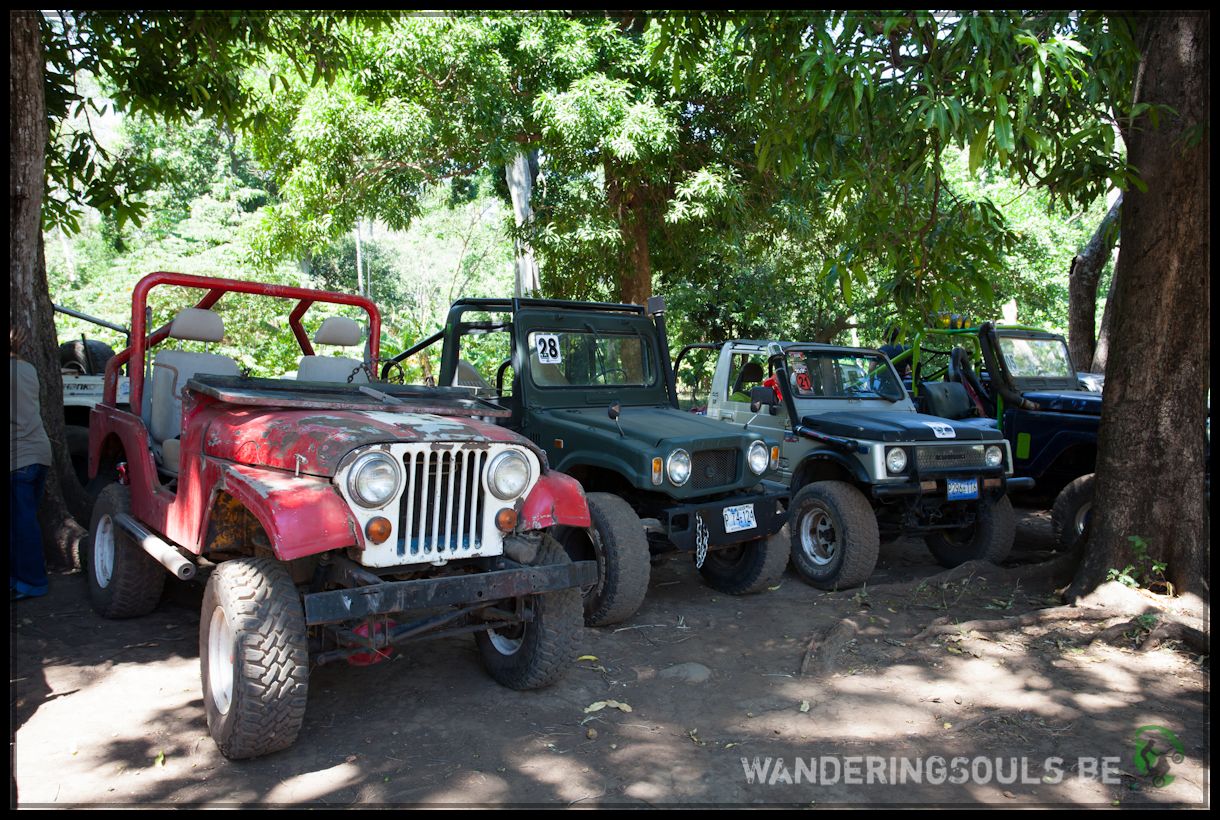 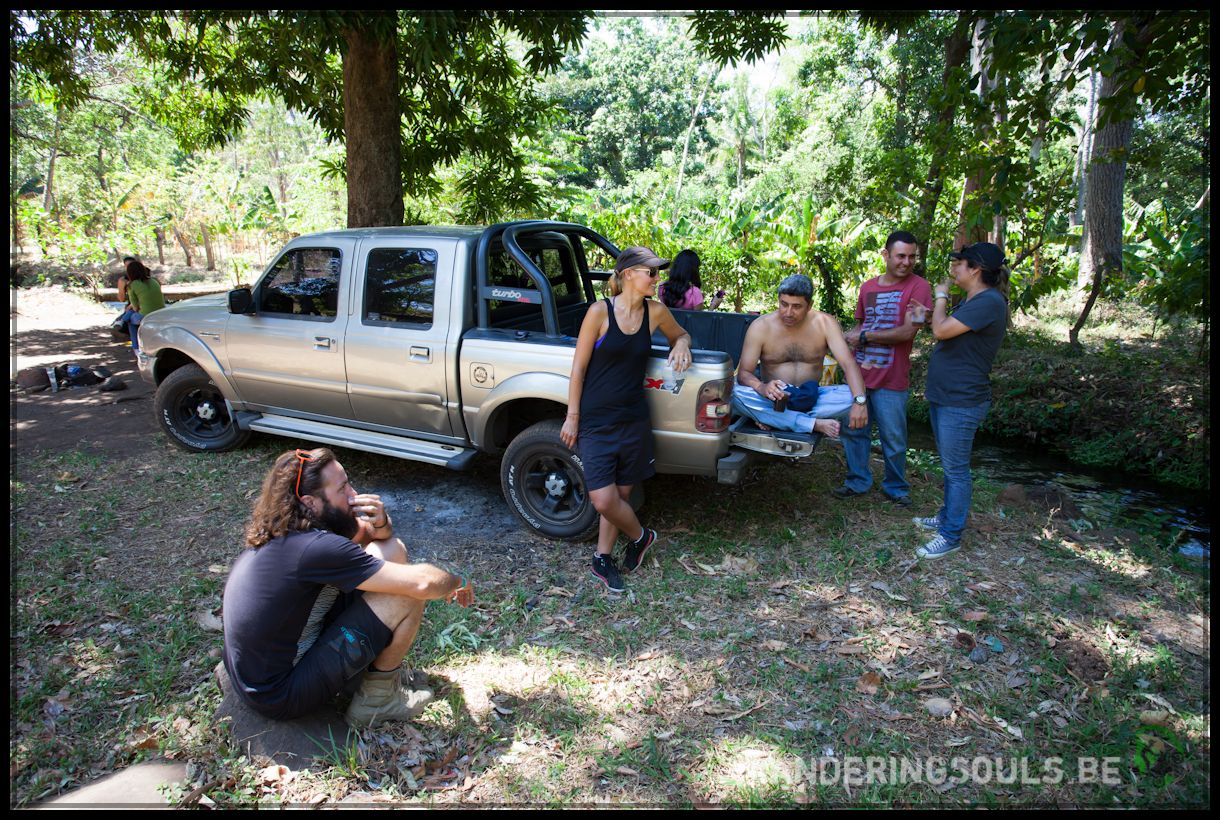 At the lake we weren’t the only ones, because there was also a group of people getting baptized in the water by local priests. It felt like god and the devil were at the same place at the same time, a church community and a bunch of drunken 4×4 drivers… 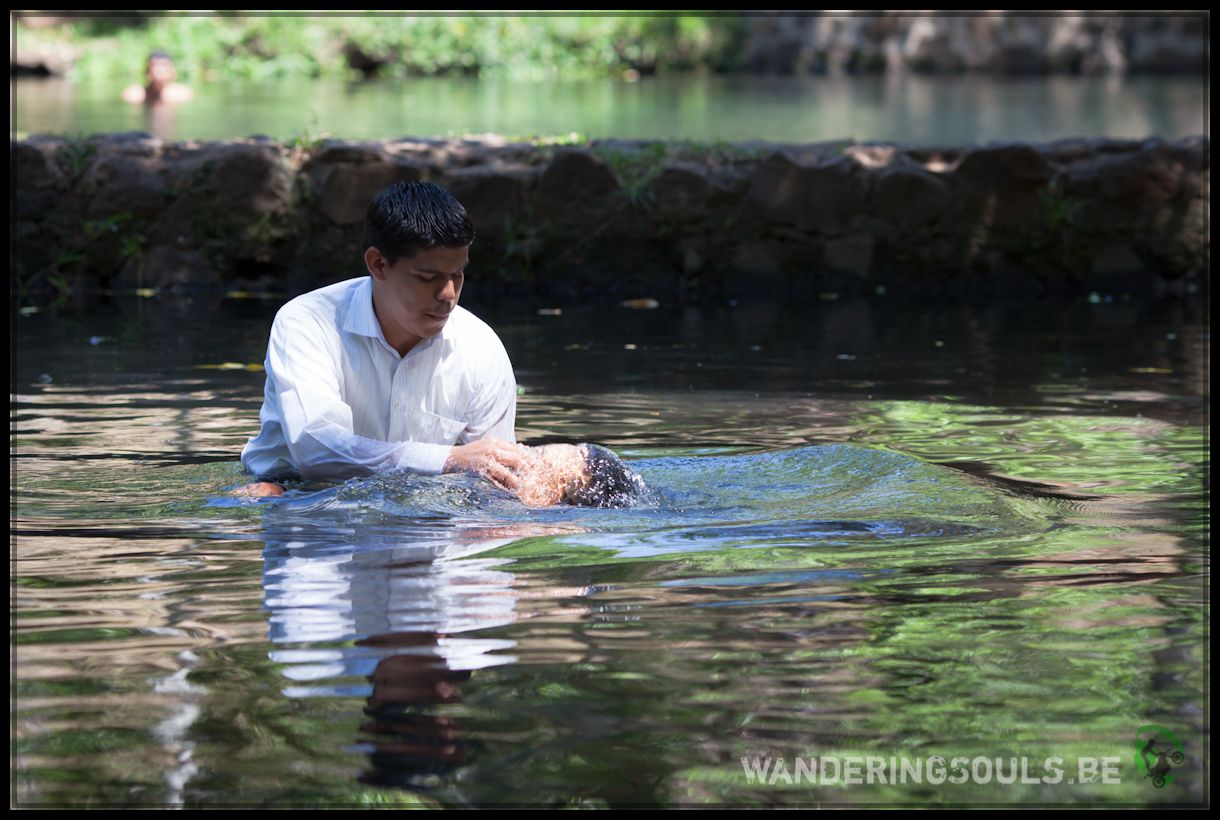 The baptism was a colorful gathering of people, chanting and dancing while the people were being baptized. 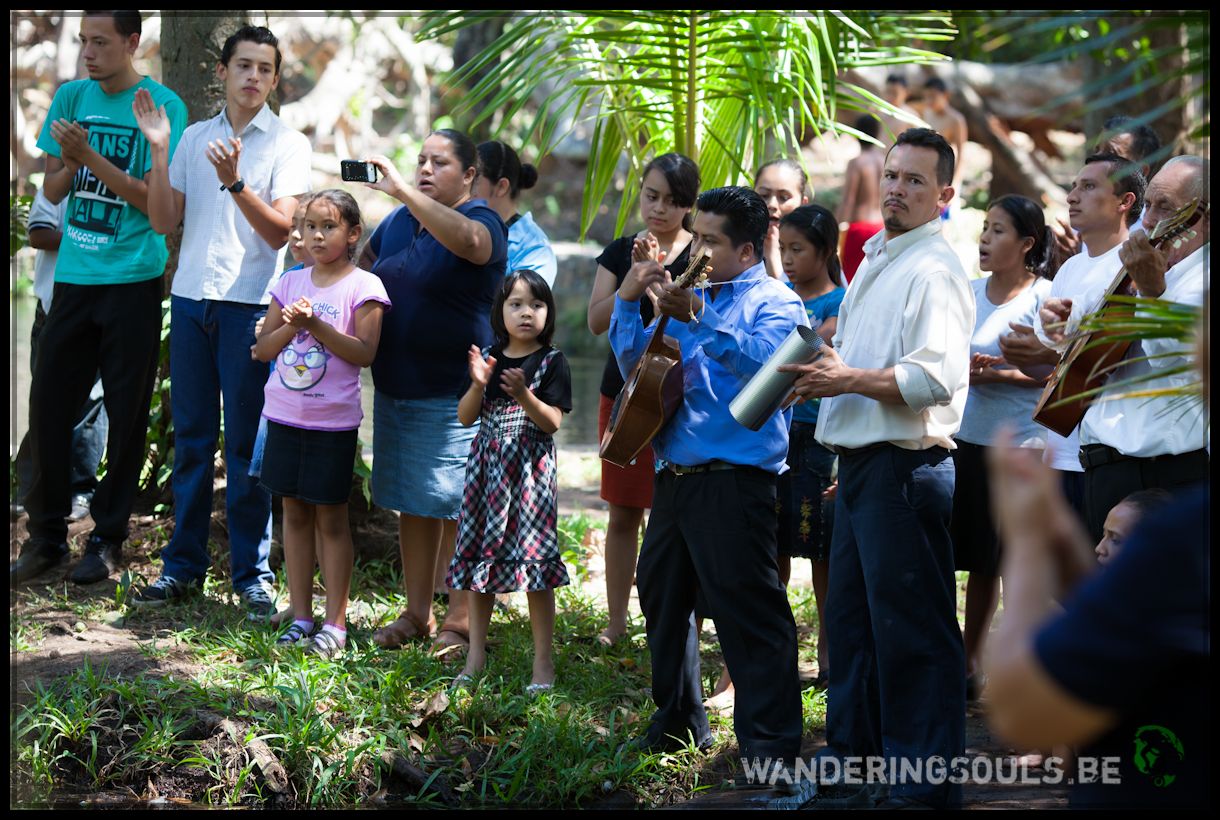 What happens when the 4×4 drivers get drunk and want to show off with their Jeep, they get stuck on top of a huge tree trunk and can’t get off anymore. 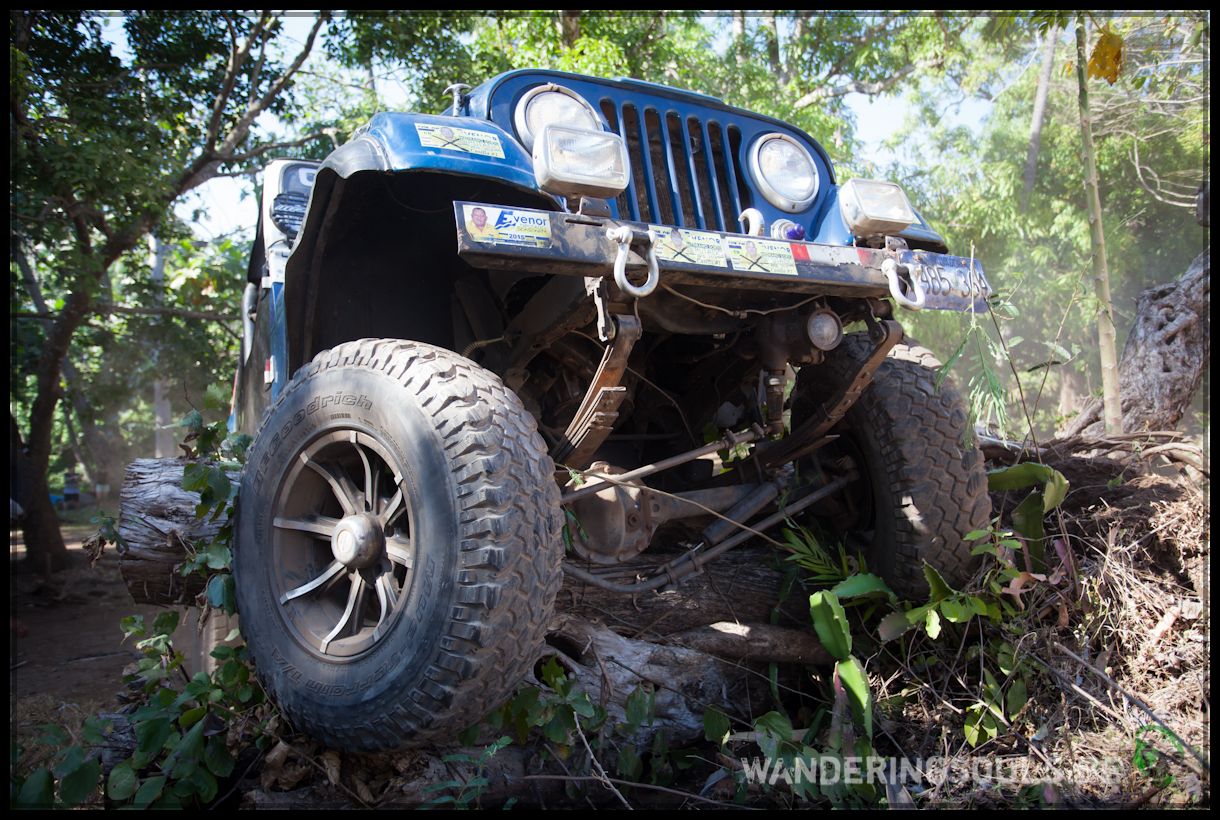 How many drunken El Salvadoreneans does it take to lift the Jeep off of the trunk? In the end they managed to free the guys car after a whole lot of effort and the result seemed to be whole lot of costs to get the Jeep fixed because the front axle was totally broken to pieces. 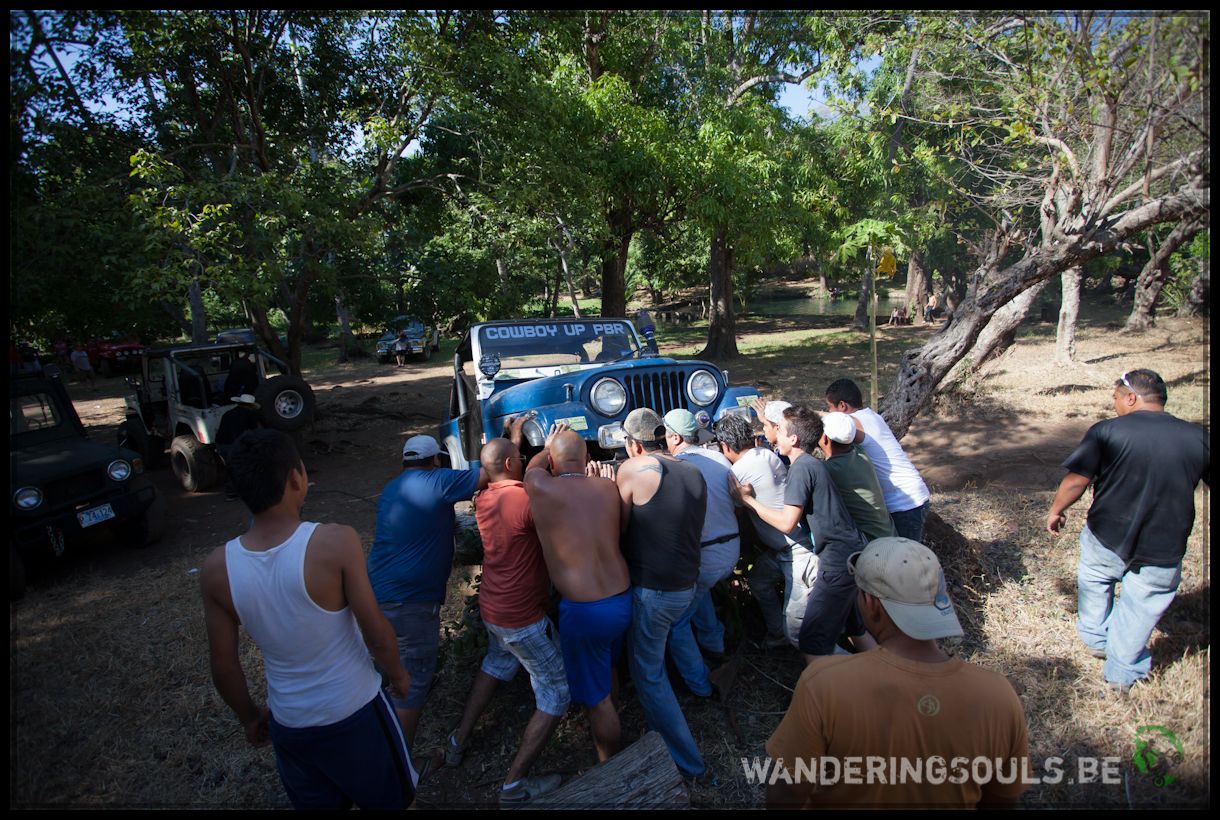 Before we left, it was time to take a picture with this whole group of happy (drunken) Salvadorians… 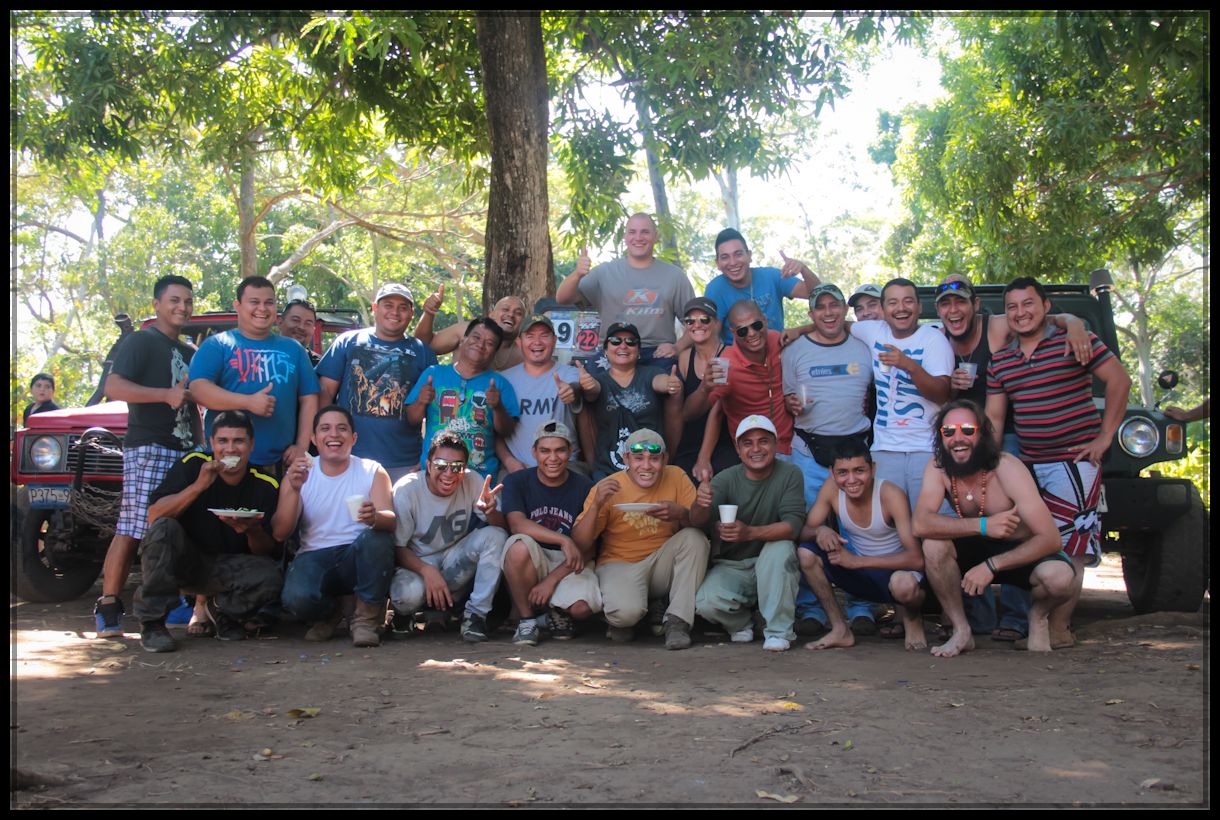 Juan Carlos asked us if we wanted to take a river crossing with the Jeep, so when we said yes, he took us on some of the cool backroads the country has to offer! The bridge over the river didn’t look very secure but Seb took his chances so he could get a nice shot of the rest of us riding through the water. 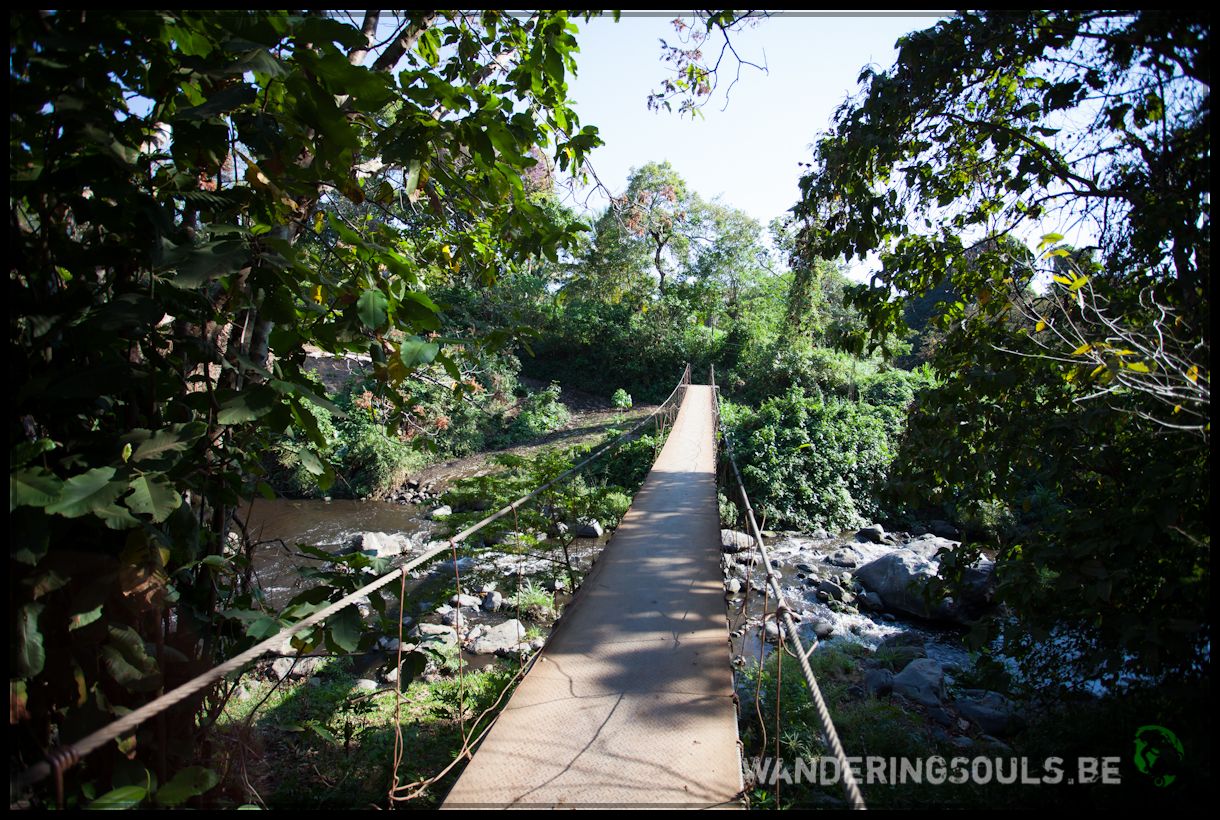 Although it doesn’t look that scary in the picture it actually was quite a steep climb and the expression on our faces says it all, except for the expression on Cristina’s face because she just seems to love it! 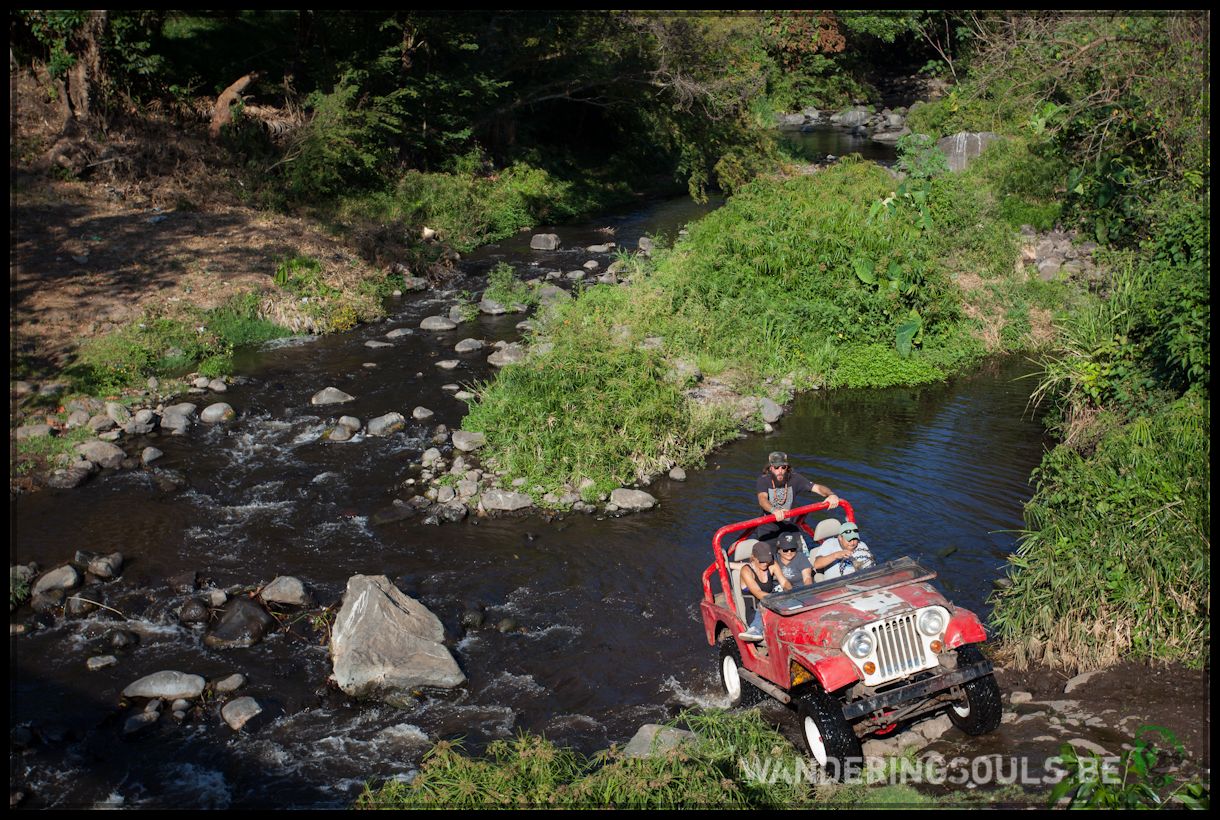 We took a whole drive on the backroads and we were glad that we didn’t have to do this with the bikes because we would never have succeeded with the ground clearance. 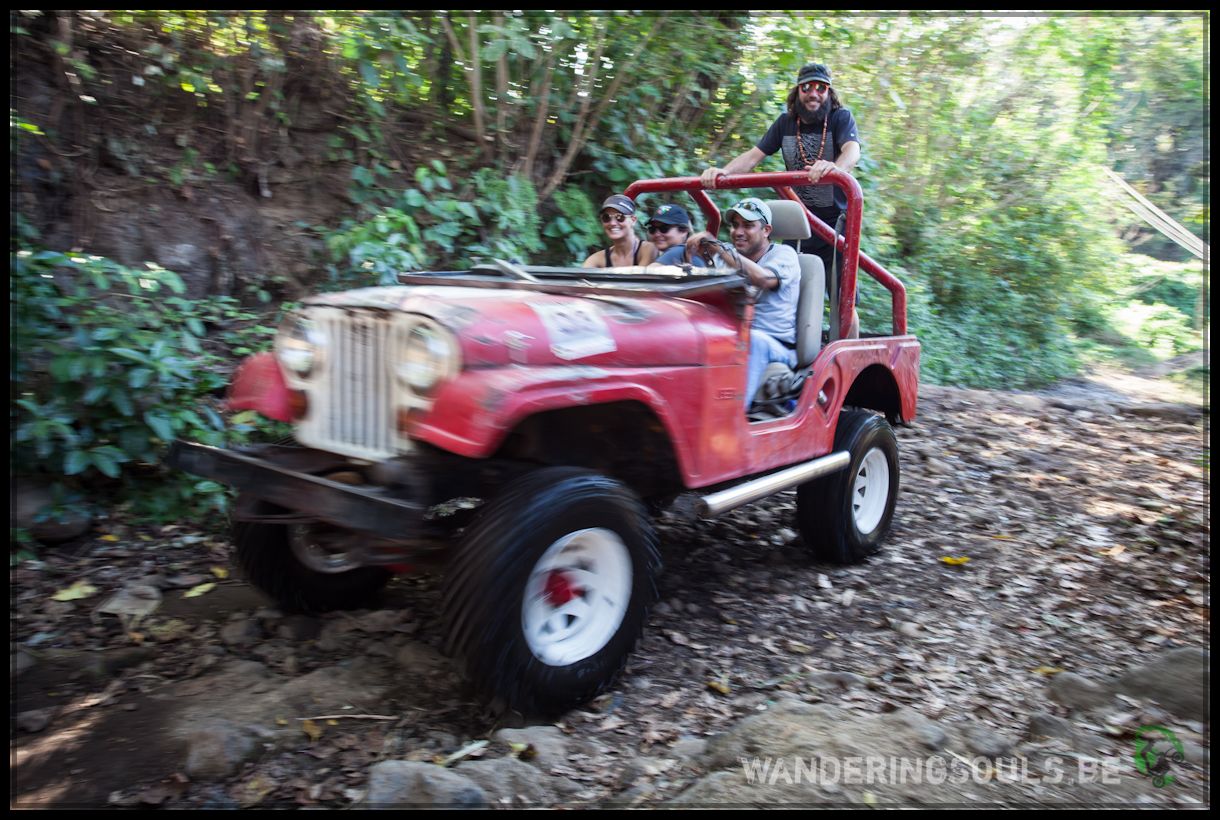 Having fun in the mud, giving Kim and Cristina a mud bath! 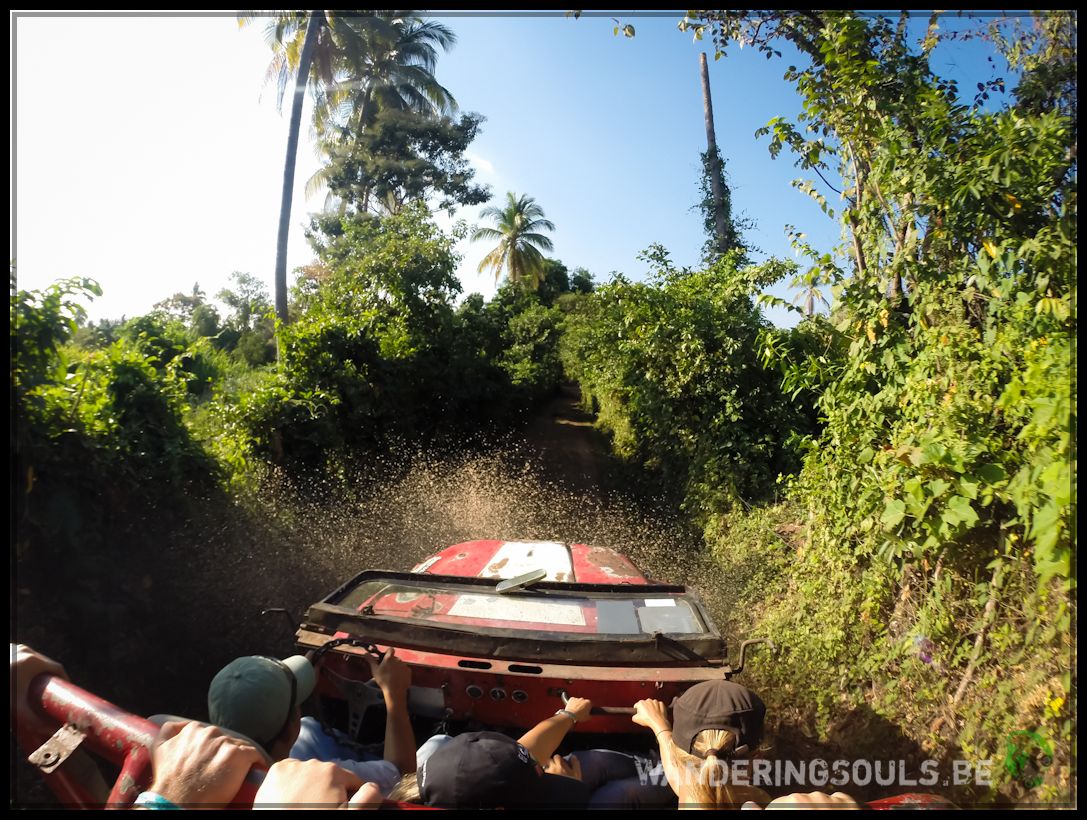 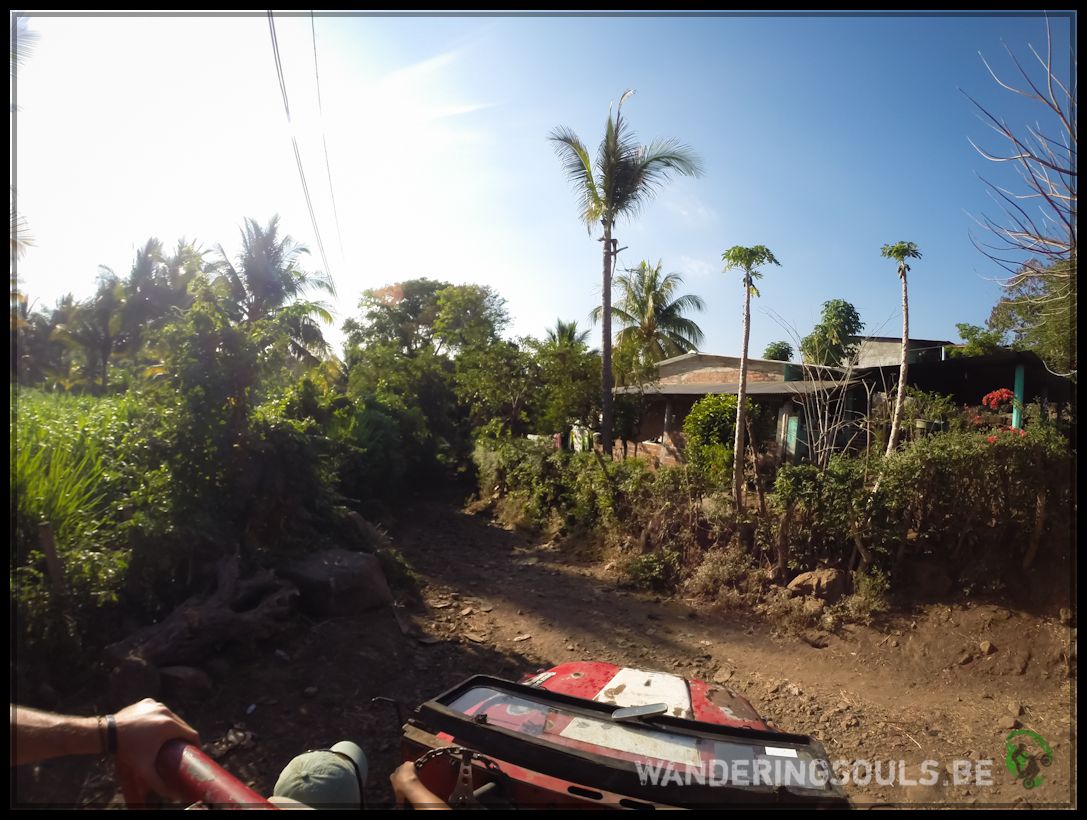 The water crossing was so fun that we decided to do it again. 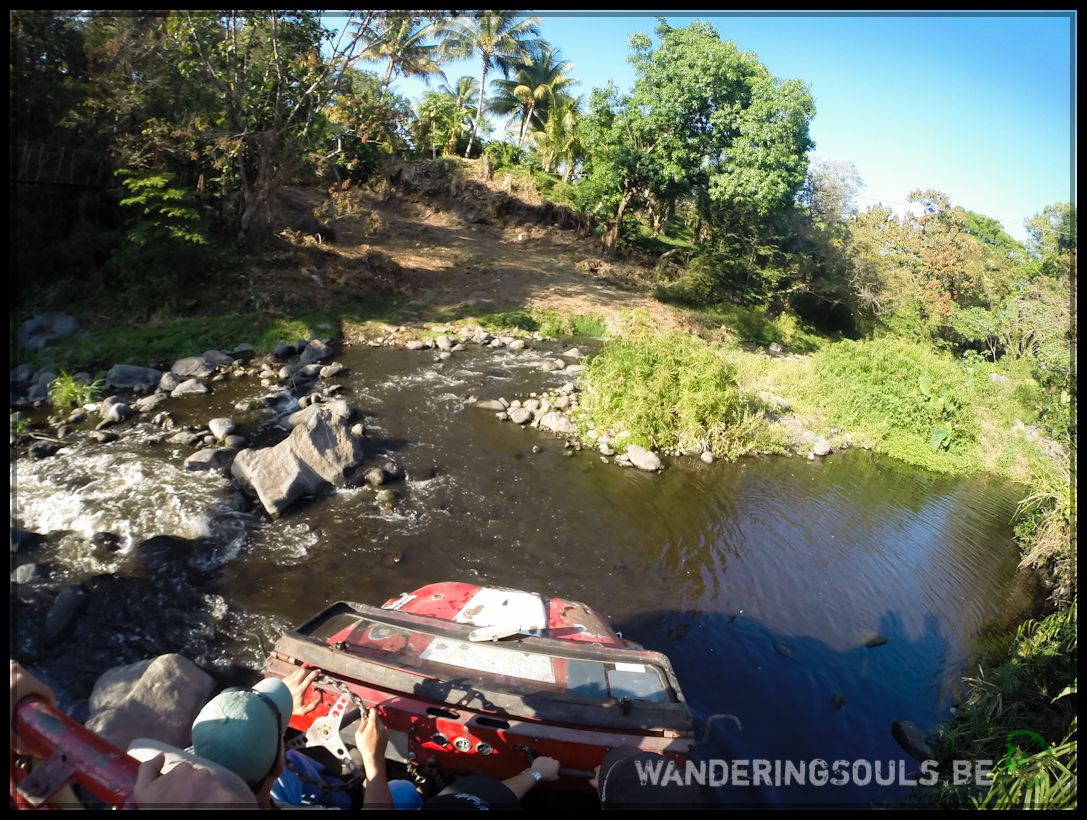 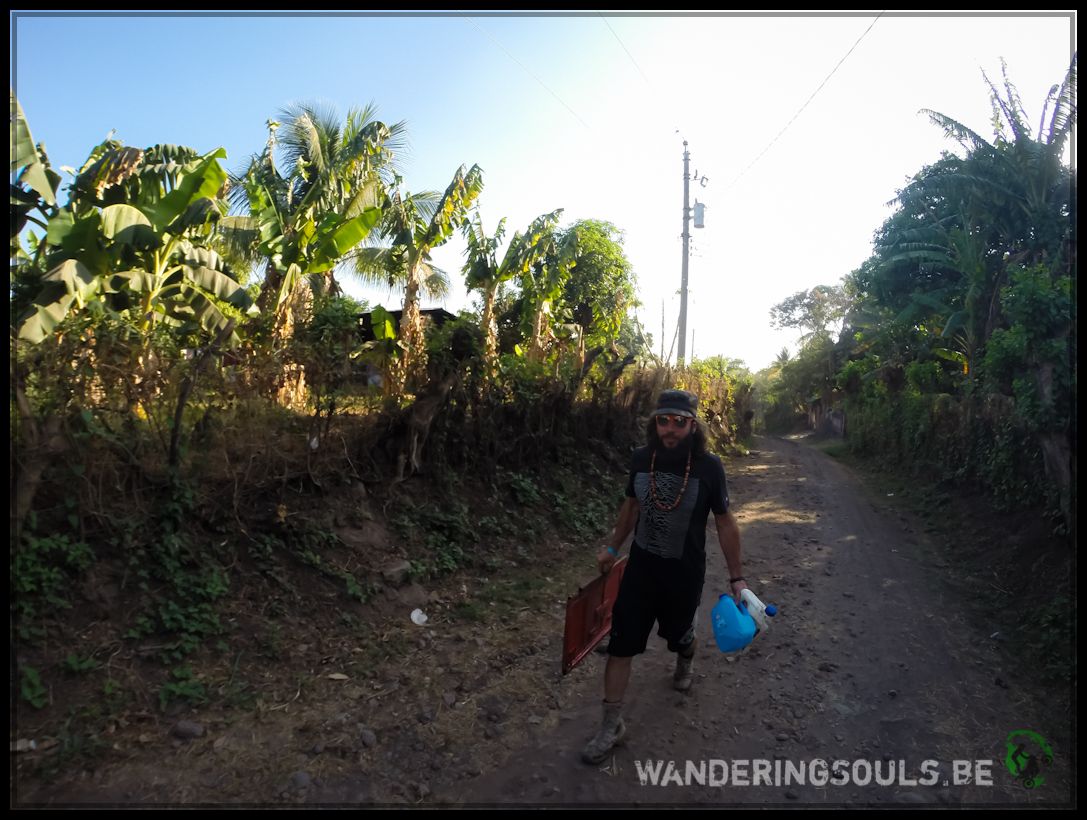 Seb has been having some stomach problems lately and all of a sudden in the middle of the trip he had to go to the toilet. Since there weren’t any toilets, he decided to go in the bushes, but we had forgotten to bring some toilet paper, so he had to use some leaves. When Seb saw this plant, he decided he would look a bit further down for some other leaves, Kim can’t imagine why though… 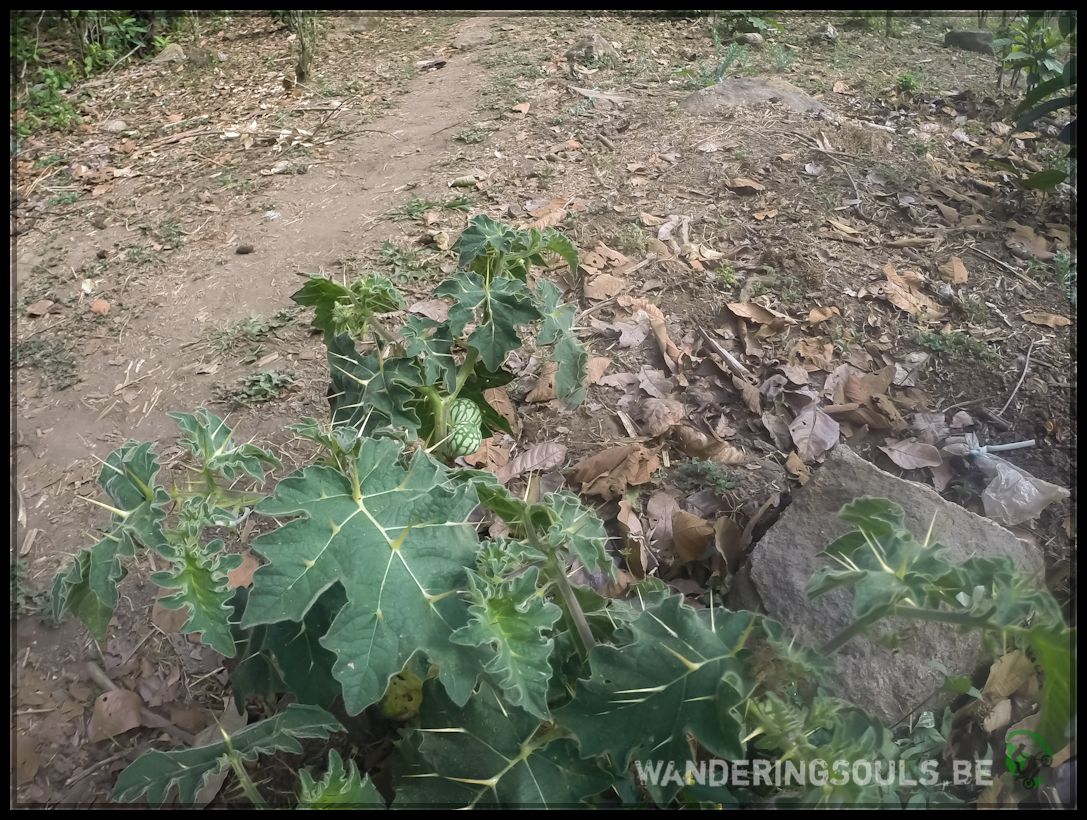 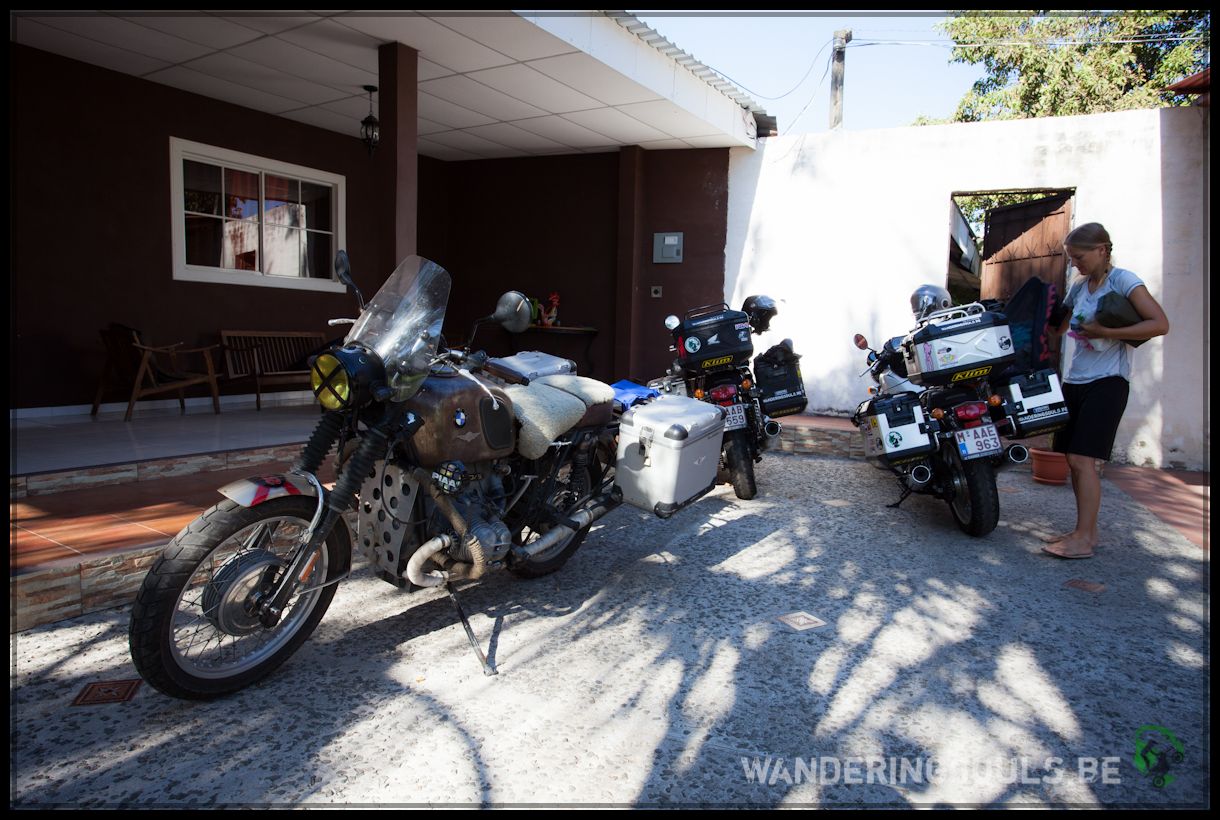 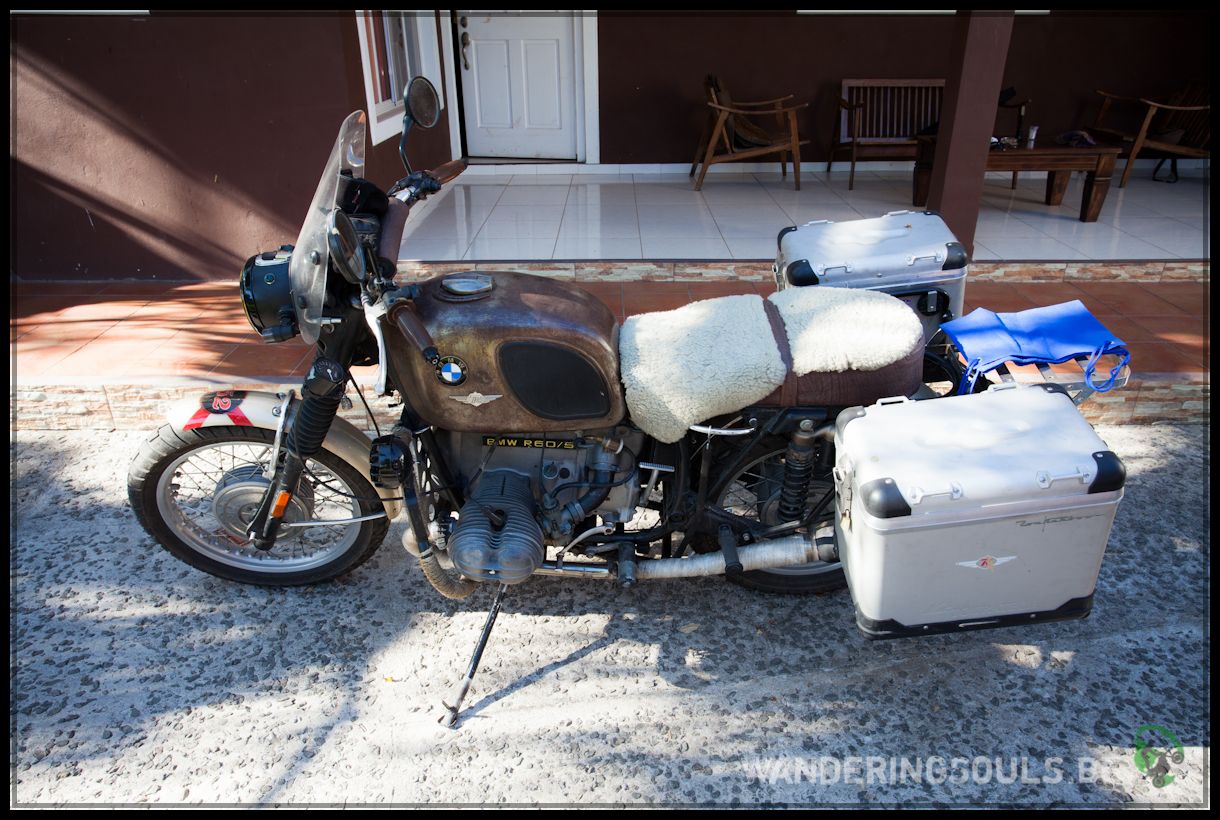 After our small adventure in the 4×4 it was really time to say goodbye this time and the next morning we left for yet another country in the beautiful Central America, namely Honduras.

We aimed for the border at El Poy and we were greeted with some really nice scenery along the way: 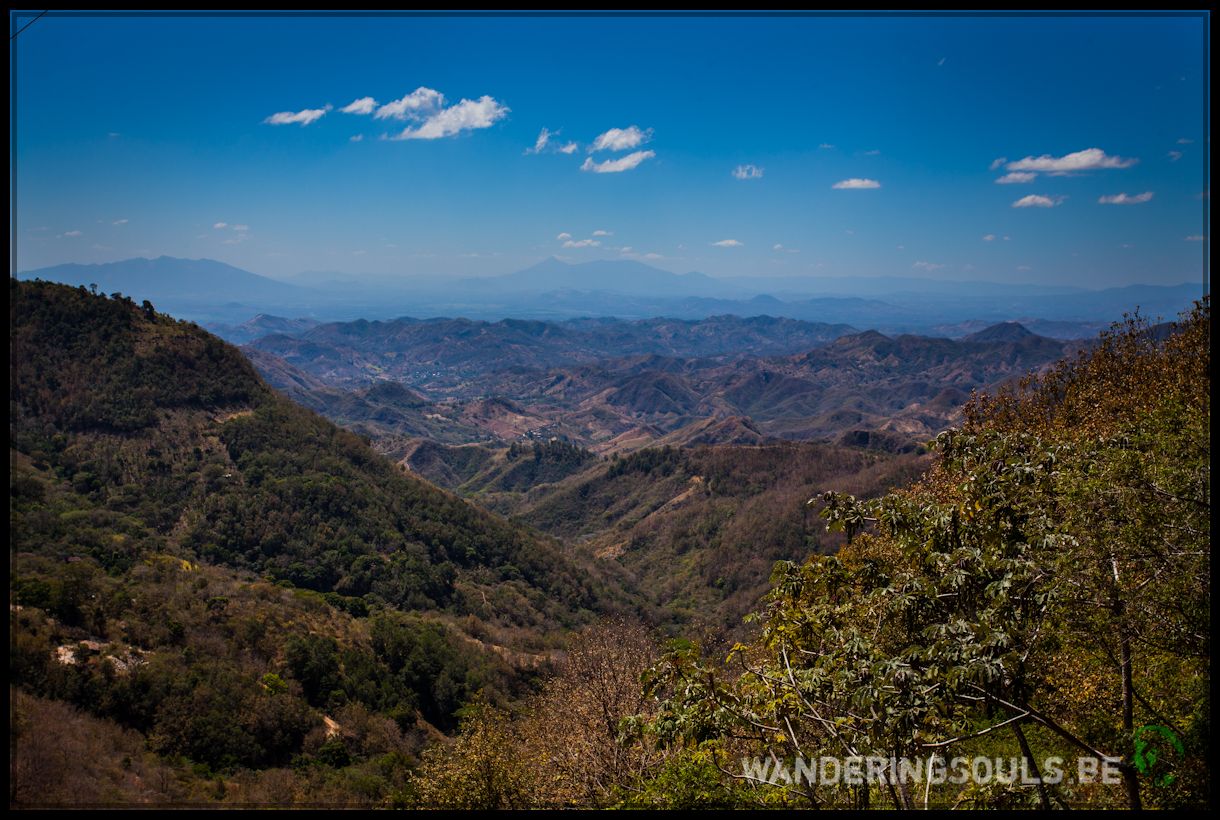 At the border, getting out of El Salvador took us 10 minutes, until we had to wait for the ‘Jefe’ to get back from lunchbreak to let us through as the other Aduana Officers were apparently not allowed to let foreigners pass this border. But they told us we were the first Europeans on a bike they could remember for at least a couple of months, so that made up for the waiting… 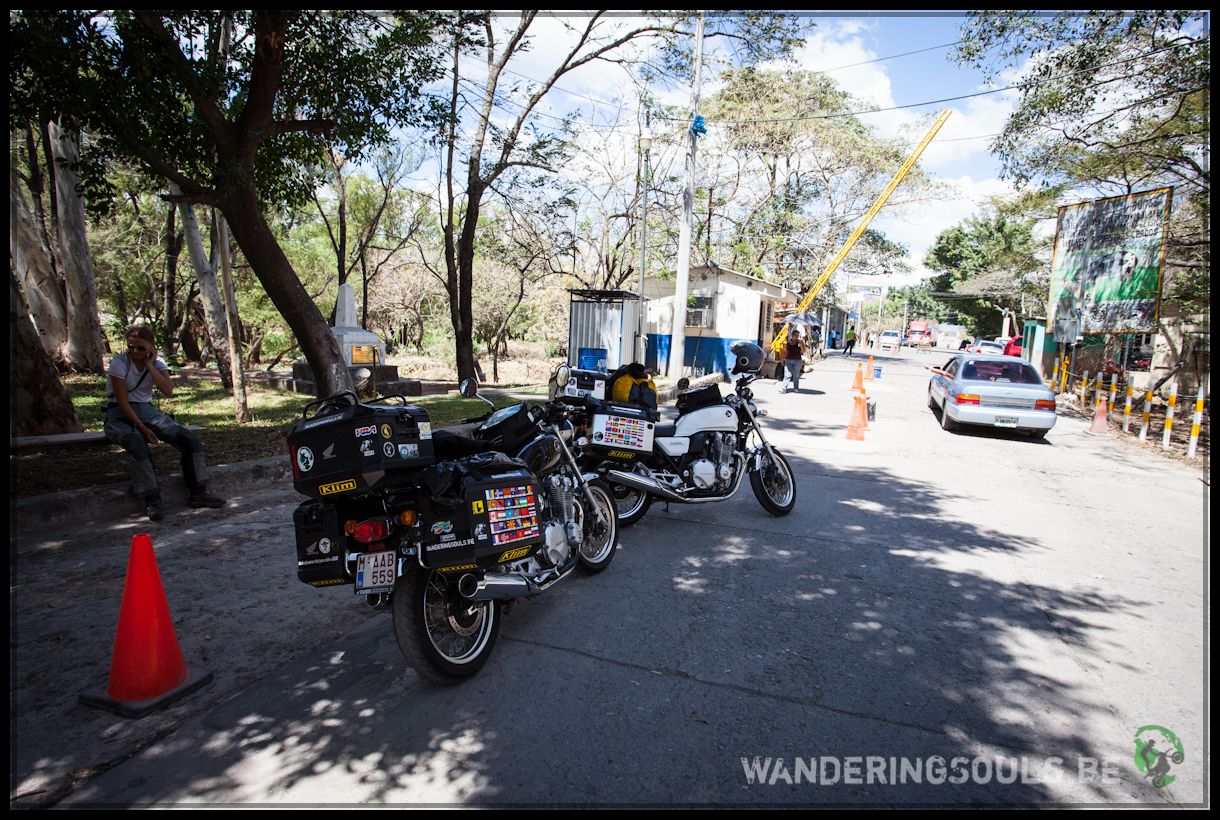