You know it is time to leave a place again when you know all the names of the local pets, all the names of the people that work where you are staying and when you have almost tasted every single dish on the menu…well this all was the case in Copan, and after postponing it again with one day, we finally decided it was time to pack our bags and leave. With a lot of sadness in our hearts we said goodbye to everyone, patted the dogs and cats one last time and headed off in the direction of La Ceiba. 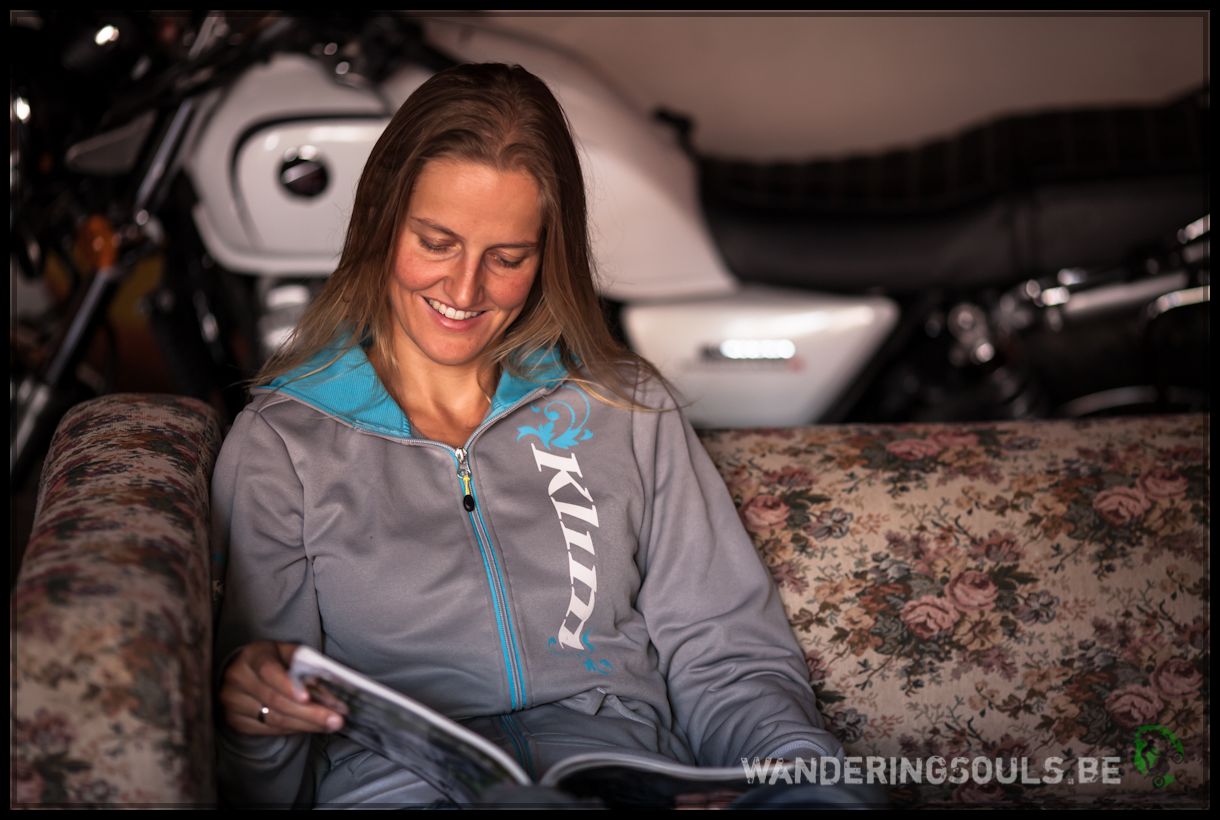 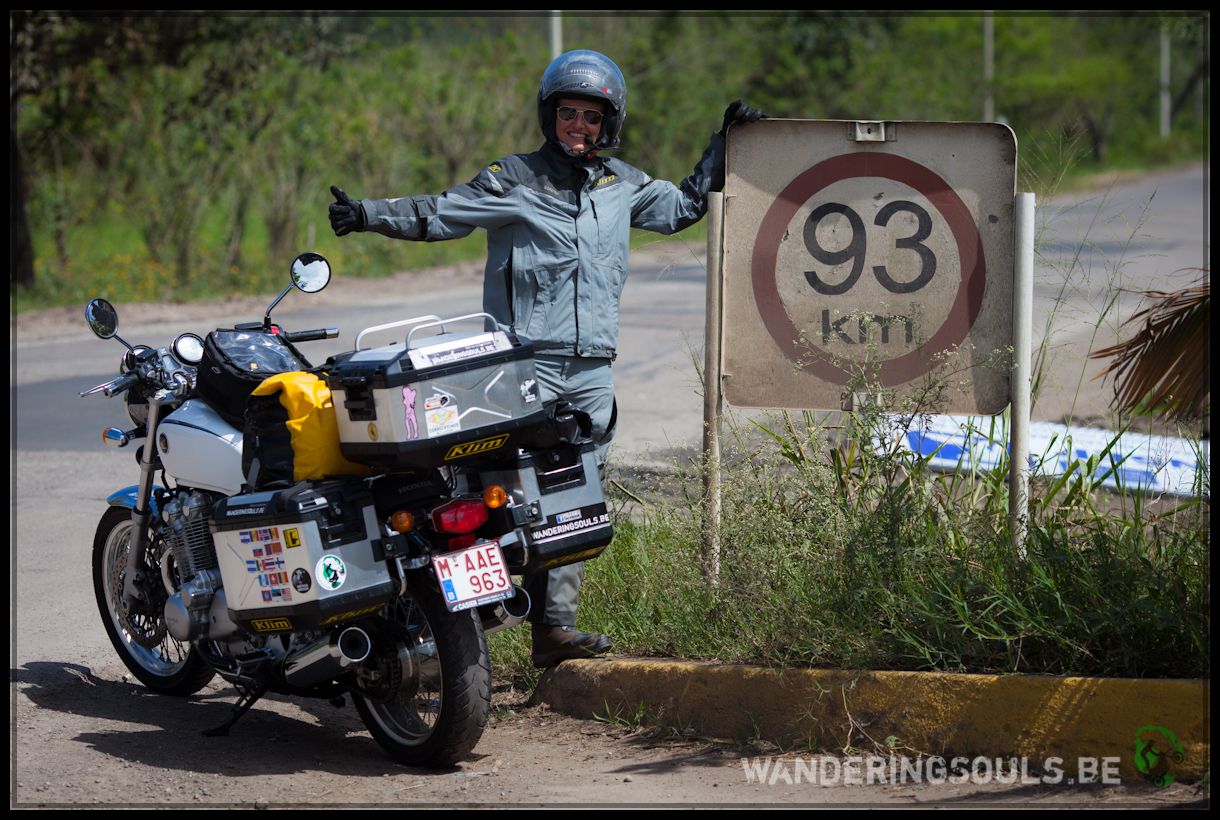 Thanks to Geert from the Via Via hotel in Honduras, we got the information of Omega Tours, an eco lodge in the jungle near La Ceiba where we could leave our bikes for a few days so that we could go to our own personal Paradise in the ocean. Geert arranged everything for us with the locals on the island, we just had to be at a certain point at a certain time. Thanks again buddy for this!!! 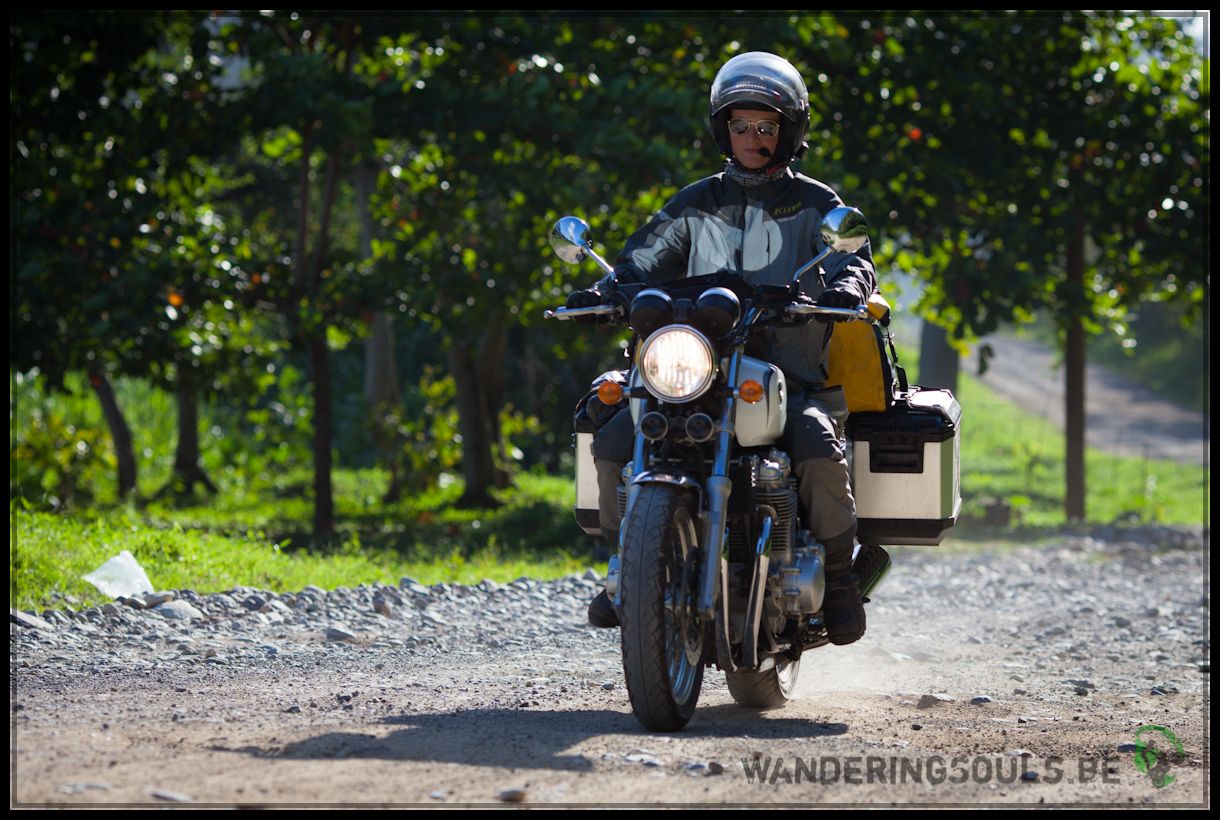 The last half hour of the road to the lodge was a dirt road with some big rocks from time to time and even a teeny tiny ‘water’ crossing. We had a laugh when we compared this to the crossings we did in Mongolia and Central Asia… 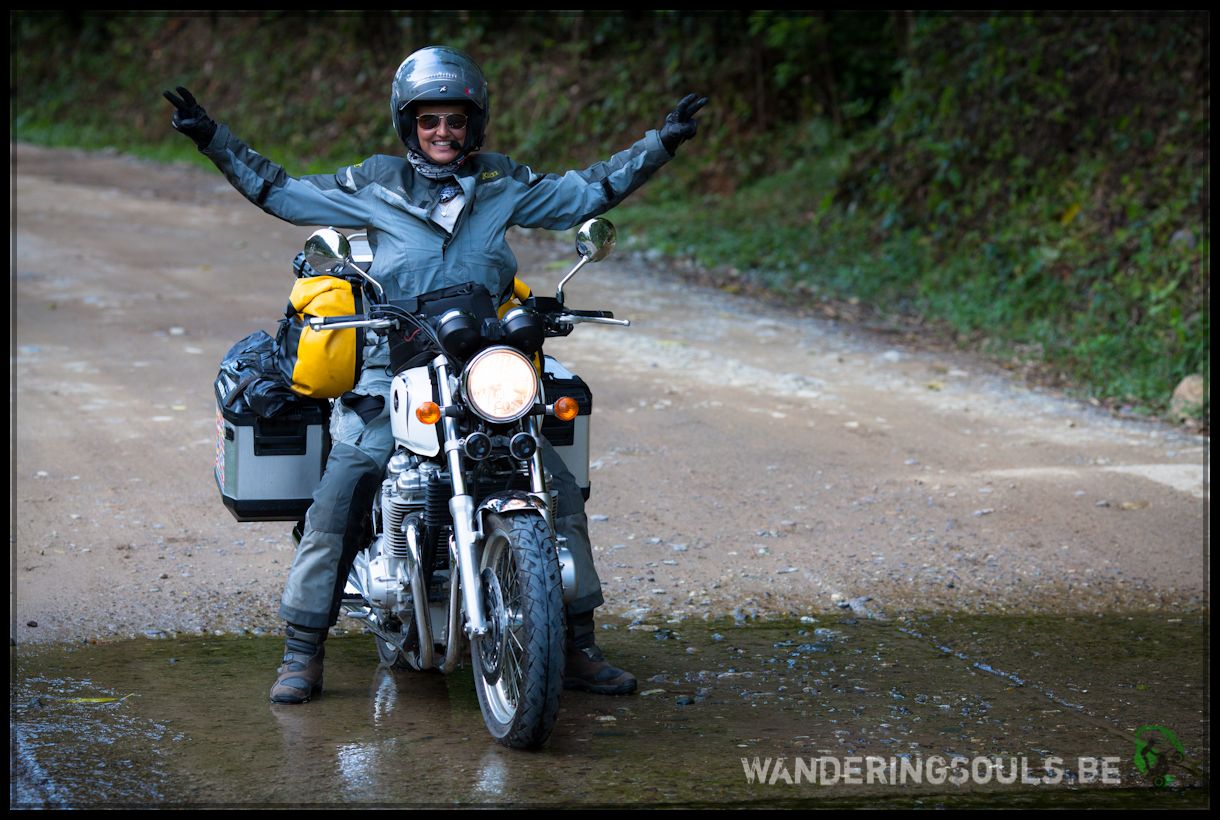 Most of the road was dusty, but the views made us feel as if we were back in Canada, next to this windy big river with its huge boulders! 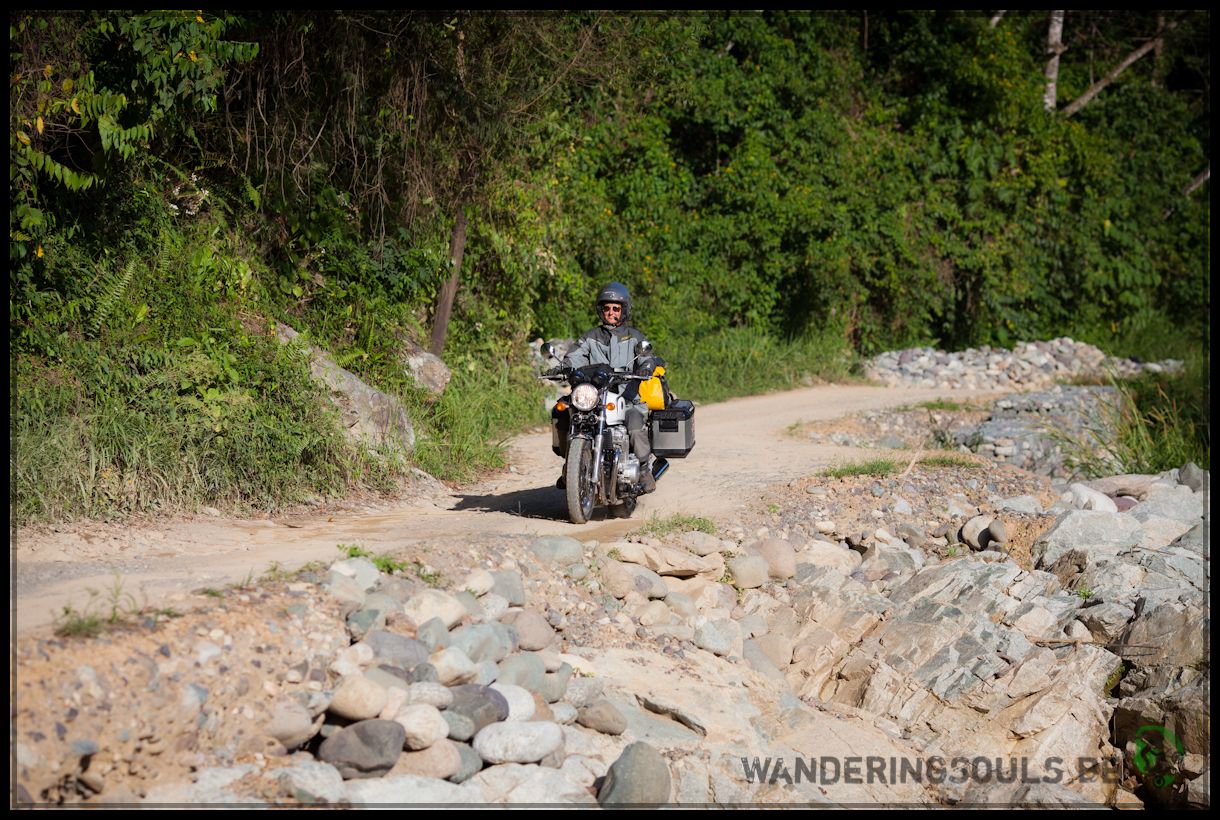 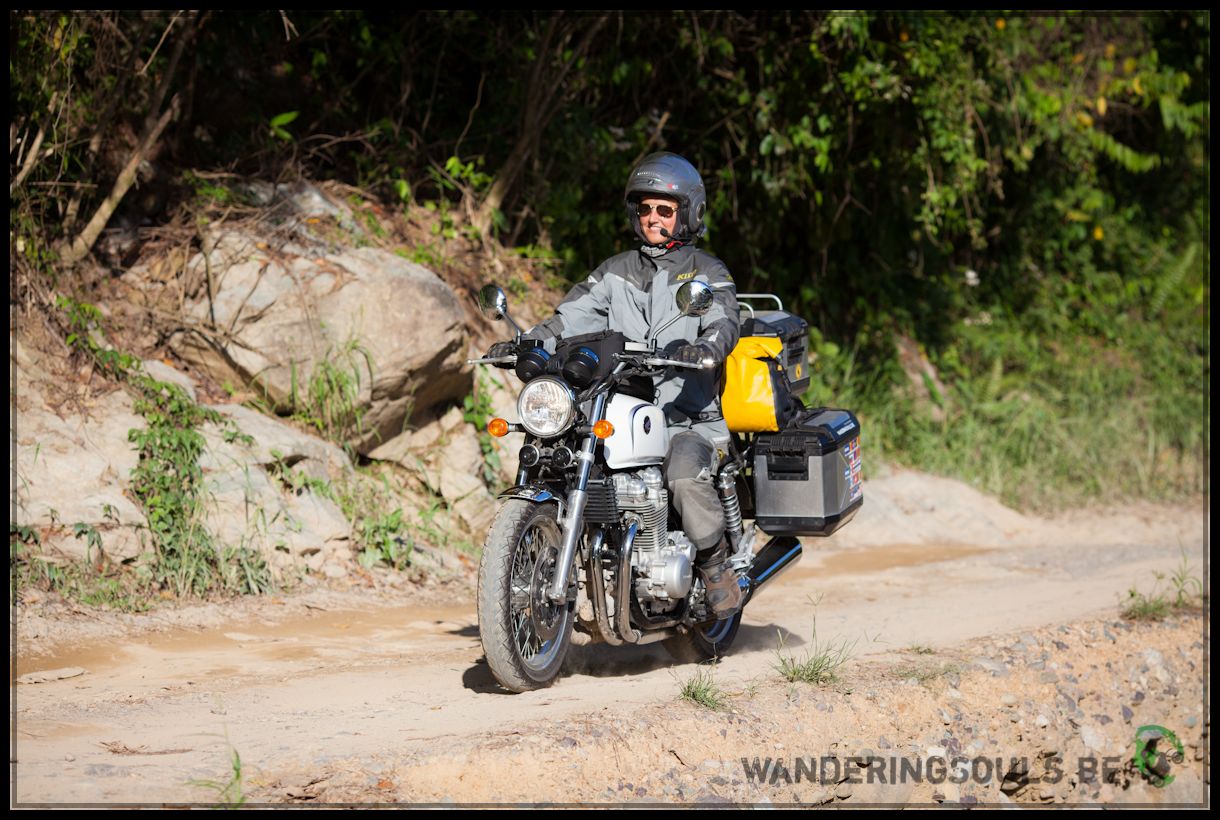 Early the next morning (ok, we must admit that we find catching a bus at 7 in the morning early!) we took the ‘chicken bus’ to the town of La Ceiba from the eco lodge (a chicken bus is an old American Schoolbus where everything goes and you can take anything on it that you want, as long as you pay). It was a very bumpy road, but at least this time we could enjoy the views from way up above! In La Ceiba we had to go shopping first because the island we were going to didn’t have fresh water or fruits or toilet paper. After shopping we took another chicken bus to Nueva Armenia, a very small godforsaken town near the ocean where one of the locals from the island, named Malaka, would be waiting for us in his small boat and sure enough, after a 1,5 hour bus ride, we were greeted by Malaka in his teeny tiny boat. We dumped all our stuff in the boat next to the huge bottles of water, crates of beer and coke and other fruit and vegetables that Malaka had already bought. Soon enough we were joined by 4 eager young boys and we thought that they would join us for the ride, but once the river reached the ocean, they all jumped out of the boat so that they could maneuver it into the ocean around all the sandbanks. 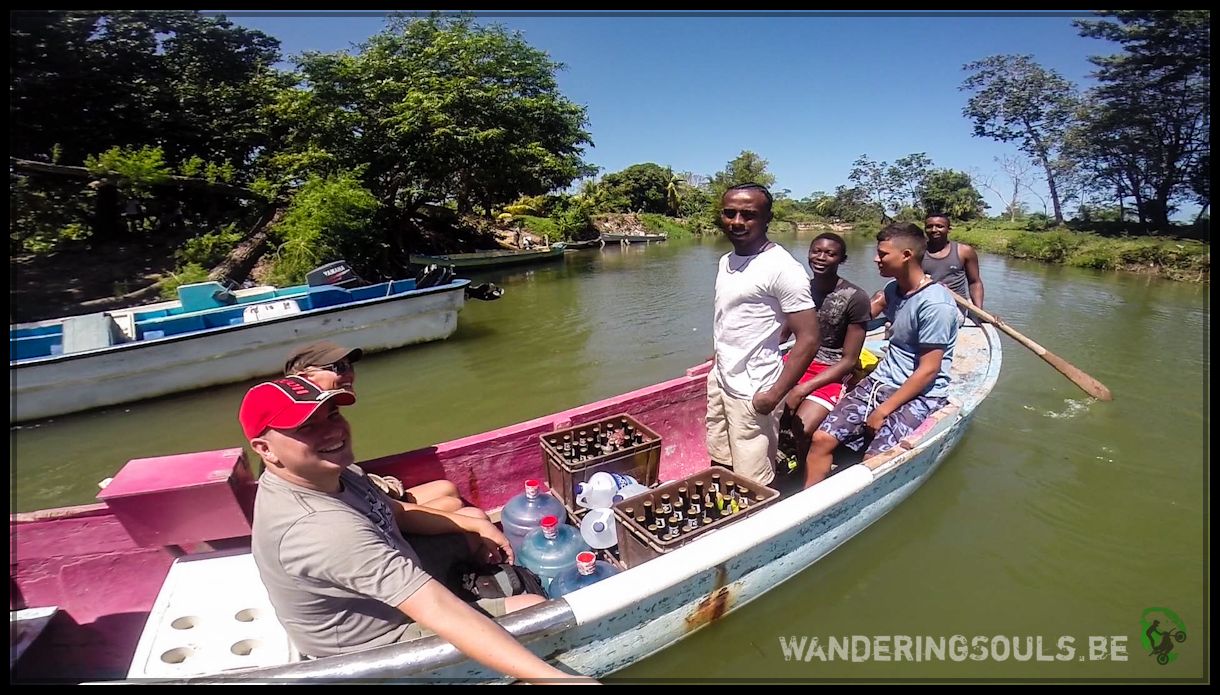 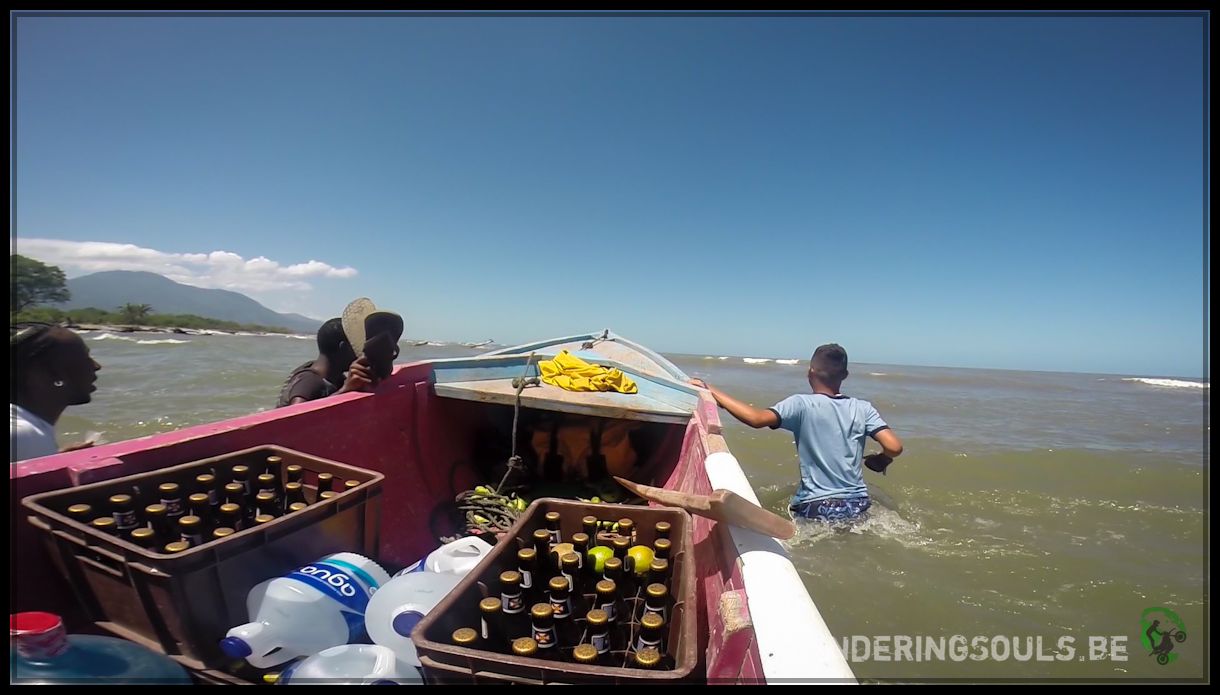 The boys waved us goodbye and off we went together with Malaka and his boat with its very loud engine to cross the ocean for 1,5 hour towards his island of Cayo Chachahuate, a small island near Cayo Cochino. (picture stolen from the internet:) 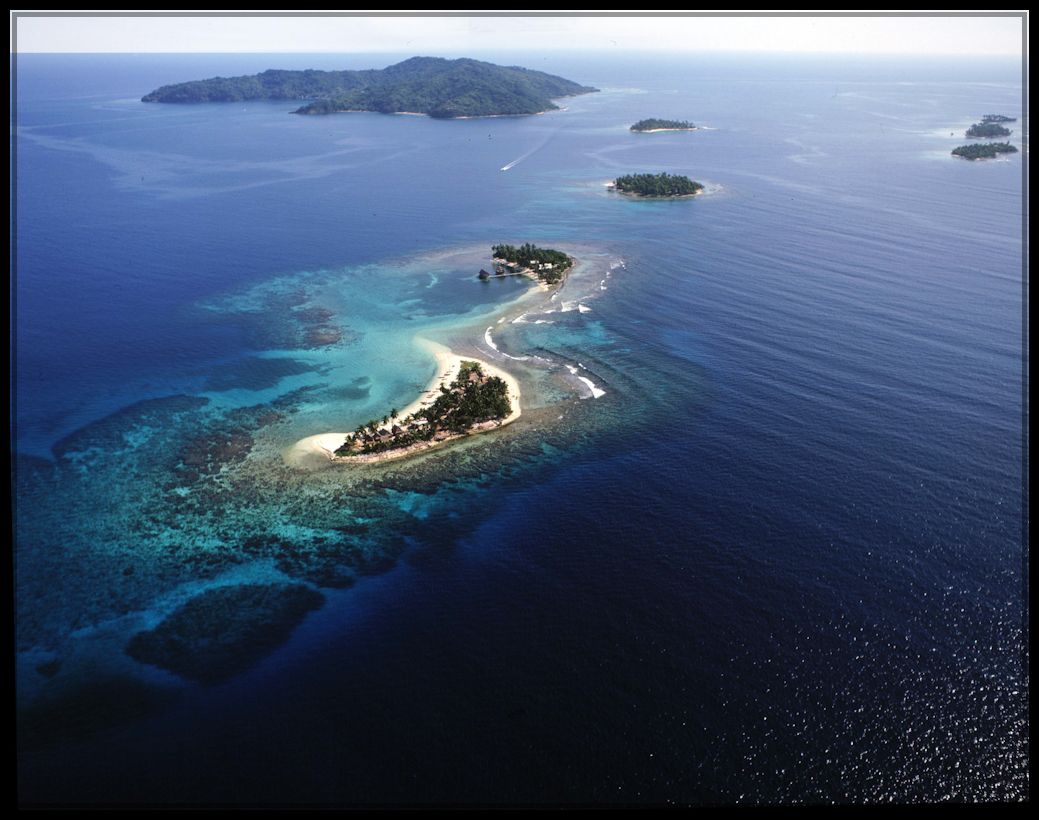 The sea was rough and by the time we got to the island we were all soaking wet, but seeing the world from the sea was a whole experience on its own. 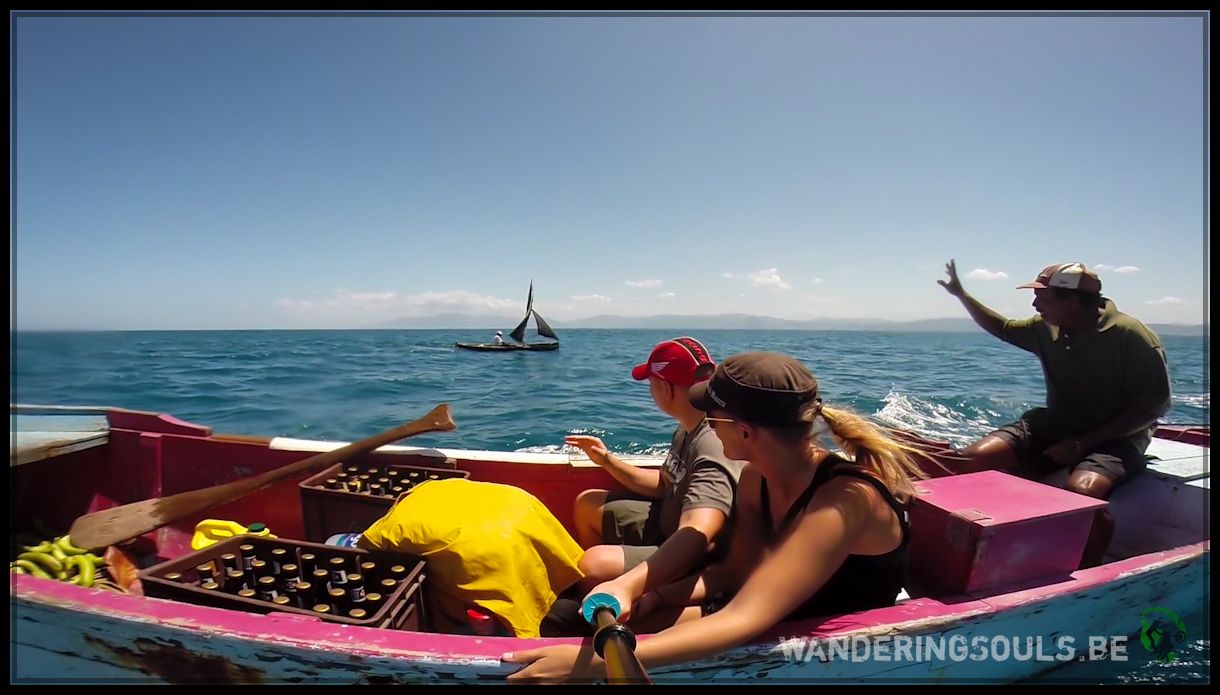 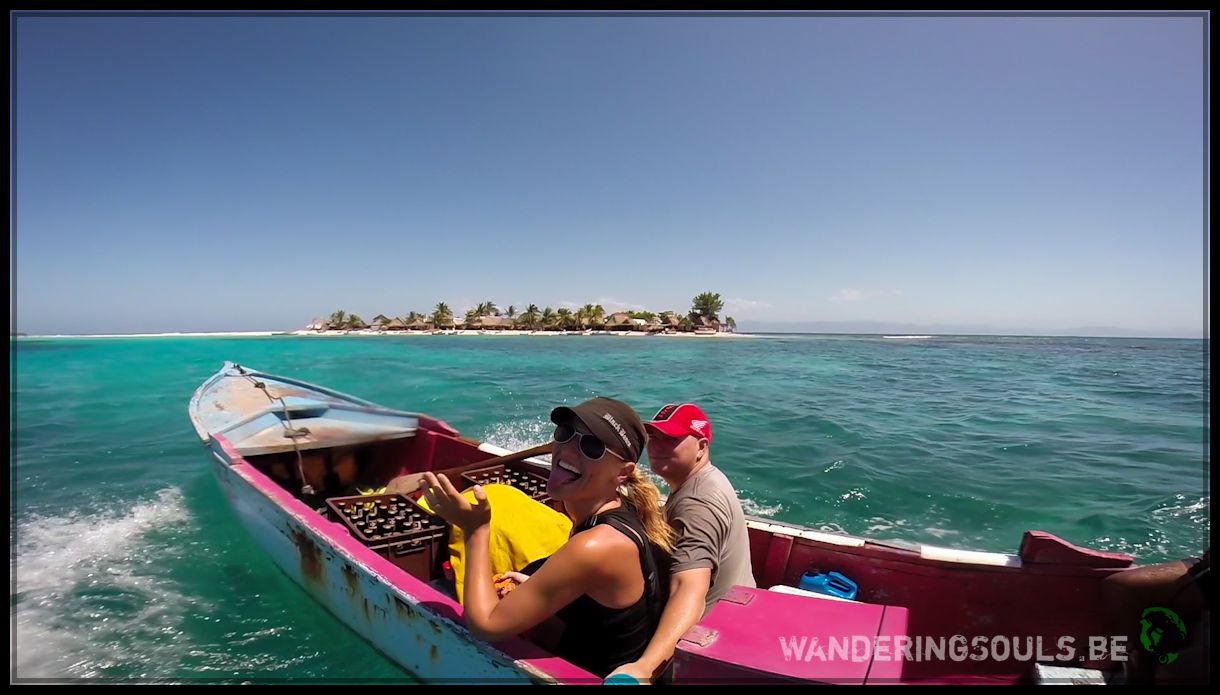 Chachahuate is an island inhabited by the Garifunas, the original inhabitants of all the surrounding islands. They have a darker skin and most of them are taller than most Hondureneans but they also speak Spanish. The Garifunas are mostly fishermen and they live with their whole family on the small island. The small children go to school on the island itself and the older ones go to the bigger islands nearby or to the mainland. 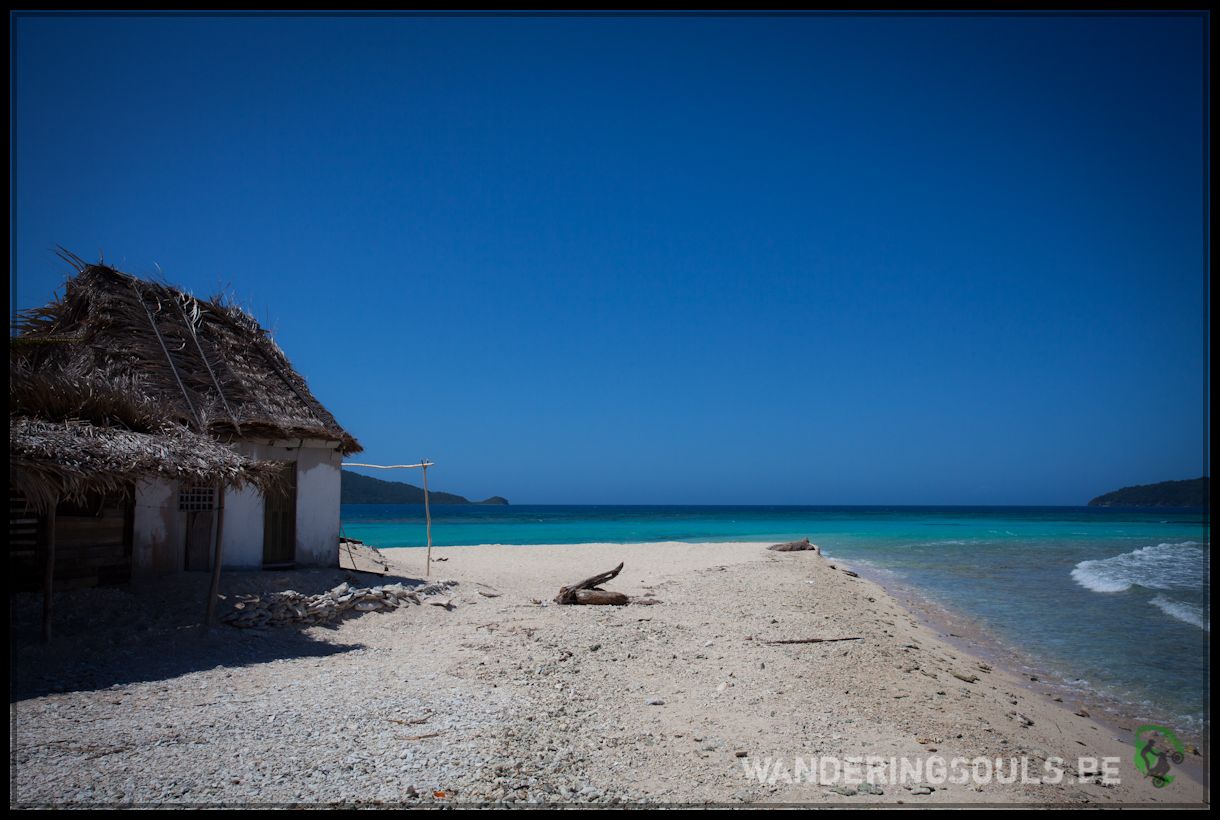 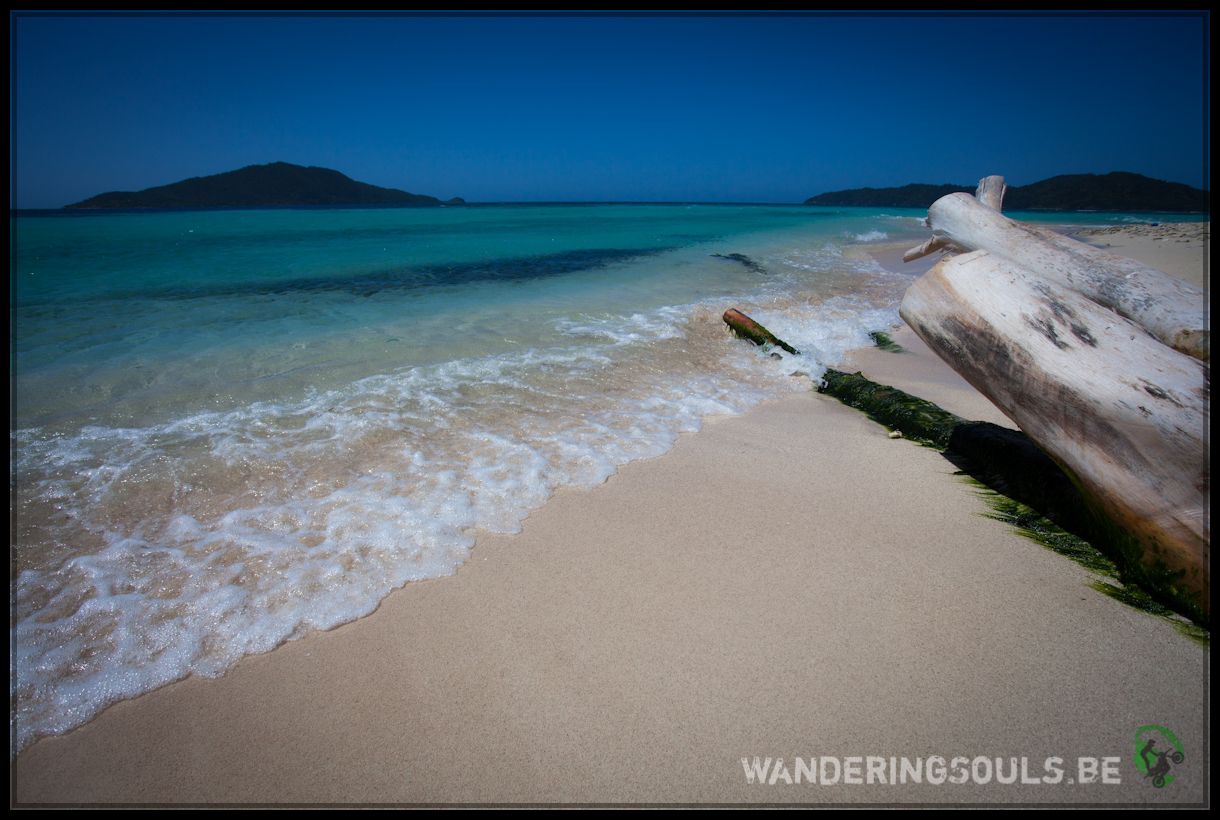 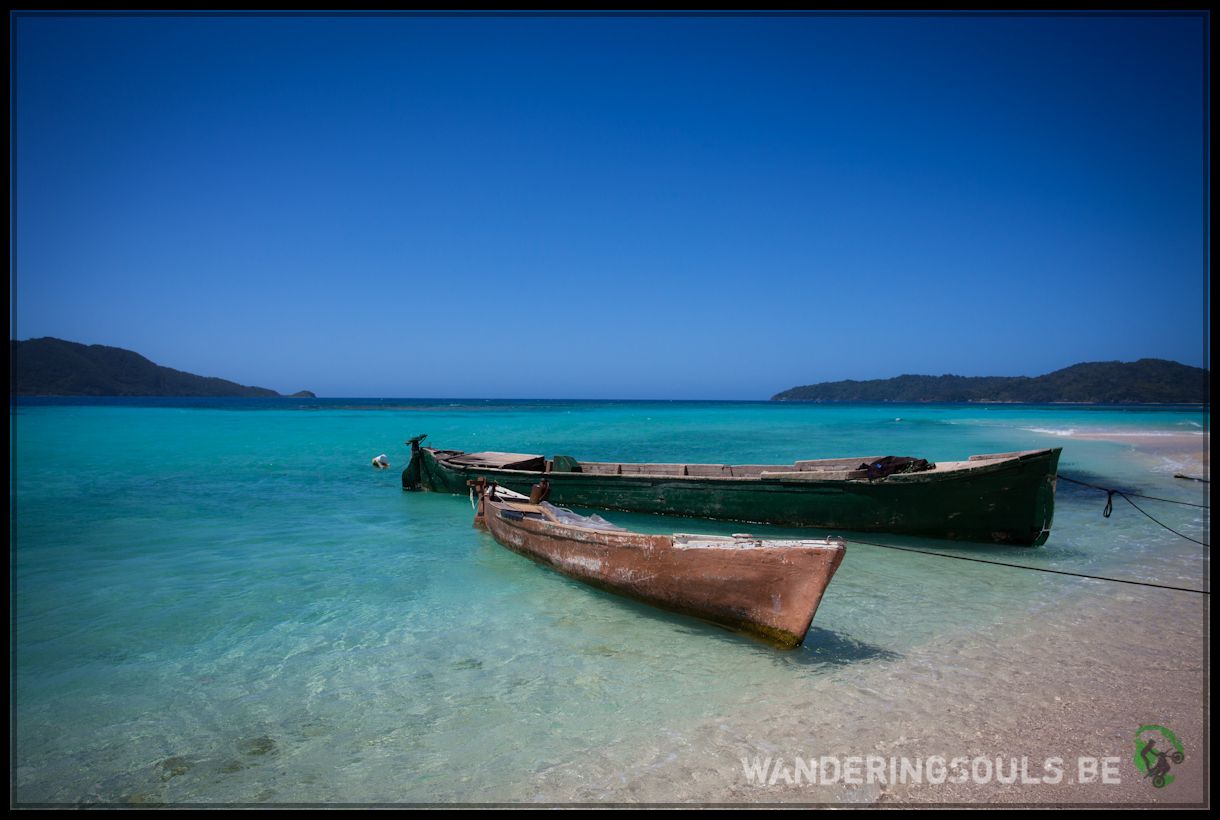 We crossed the island after arriving to go to our room (we took at least 20 steps in order to cross the island from the bottom to the top…) where we met Jessica, a local 25 year old girl who had made sure that the ‘room’ looked nice for us. She had put up some papers with pictures of shells on the walls and put a new blanket on the bed. The room consisted of a wooden frame, a tin roof and shutter windows with a lot of natural airconditioning. No shops or supermarkets, just go outside and catch your dinner: 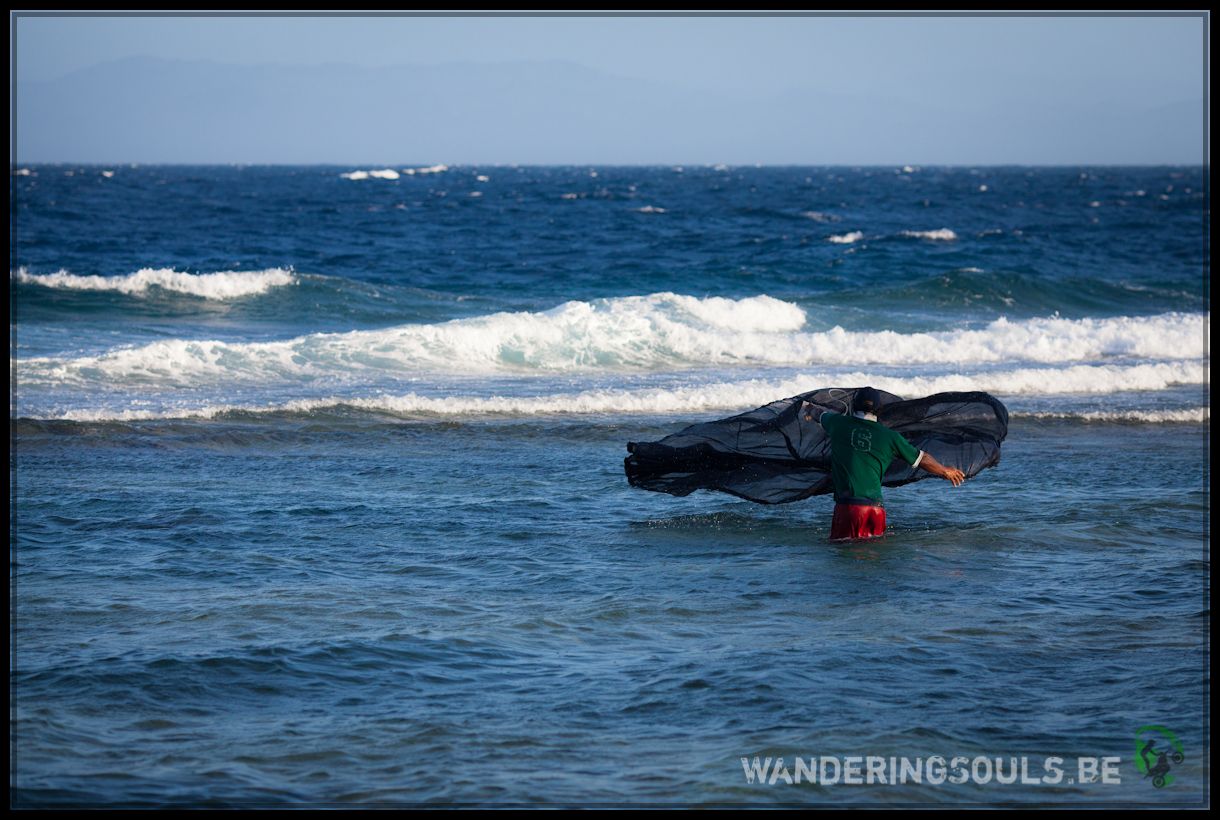 We gave Betsy, Malaka’s wife, all the fruit and vegetables we had brought and she made sure that she incorporated them in our dinner and breakfast. Every space they could build on was filled with wooden palapa’s (huts) and everyone tried their hardest to make their palapa as inviting as possible. Waist management was sadly enough not as it should be but it is incredibly hard for these people to get all this stuff on and off the island as they always need to take their boats to go somewhere. Jessica even had a normal toilet near the room and the only difference with one you have at home is that you had to flush it with ocean water you got in a bucket, but I have no idea where this went after you flushed the toilet… There was also a lot of “small” talk going on: 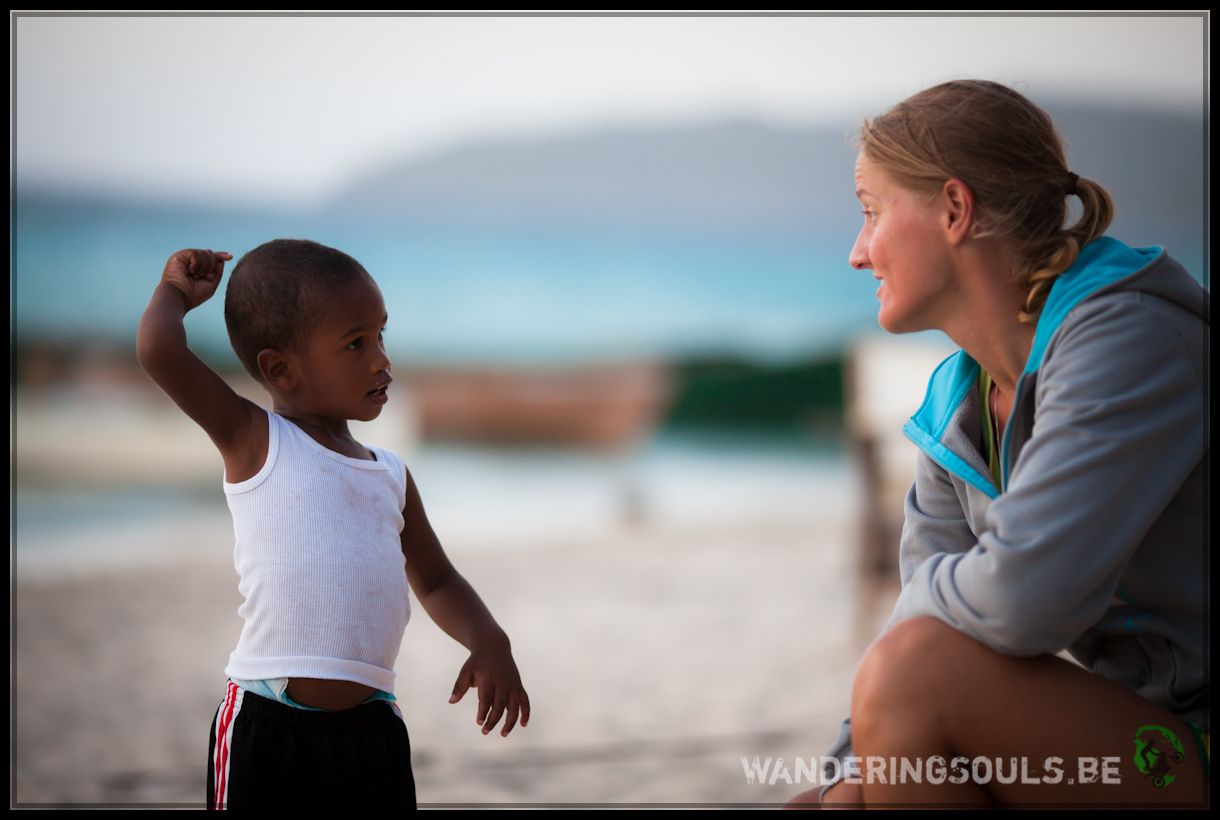 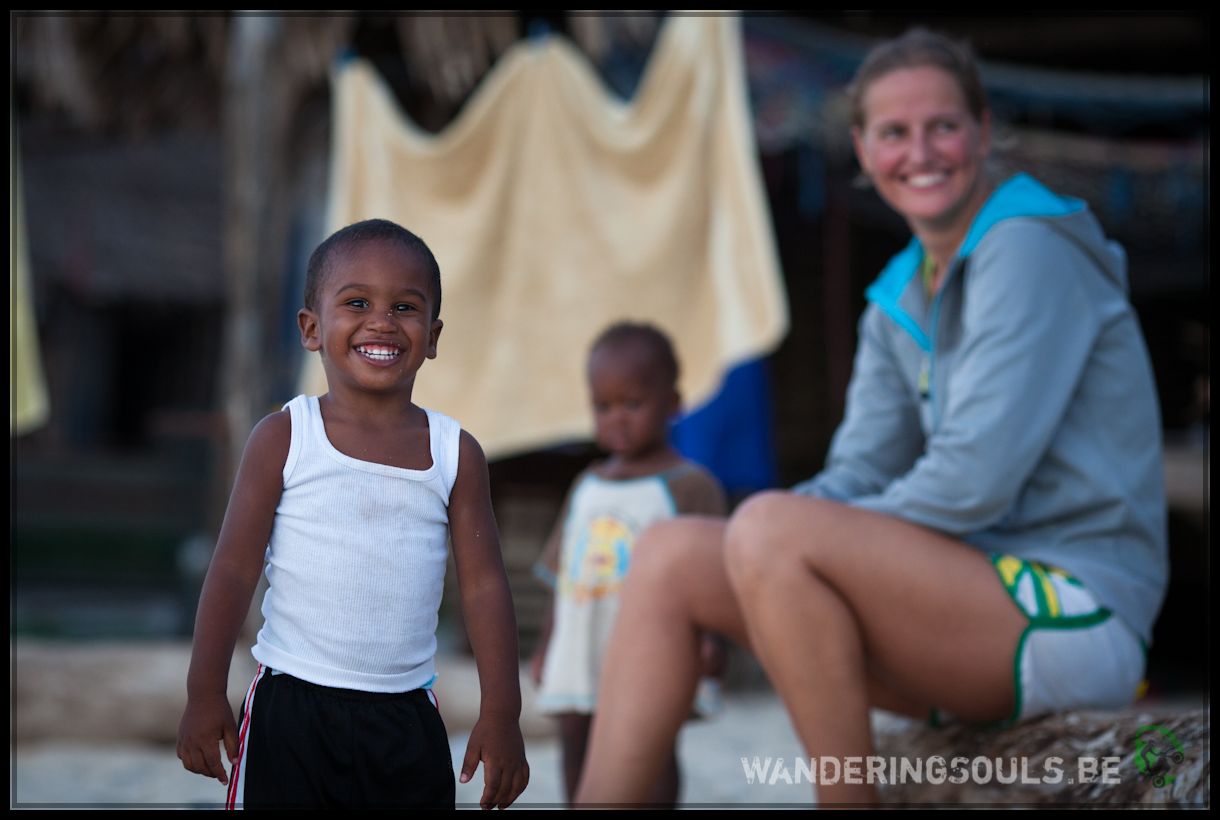 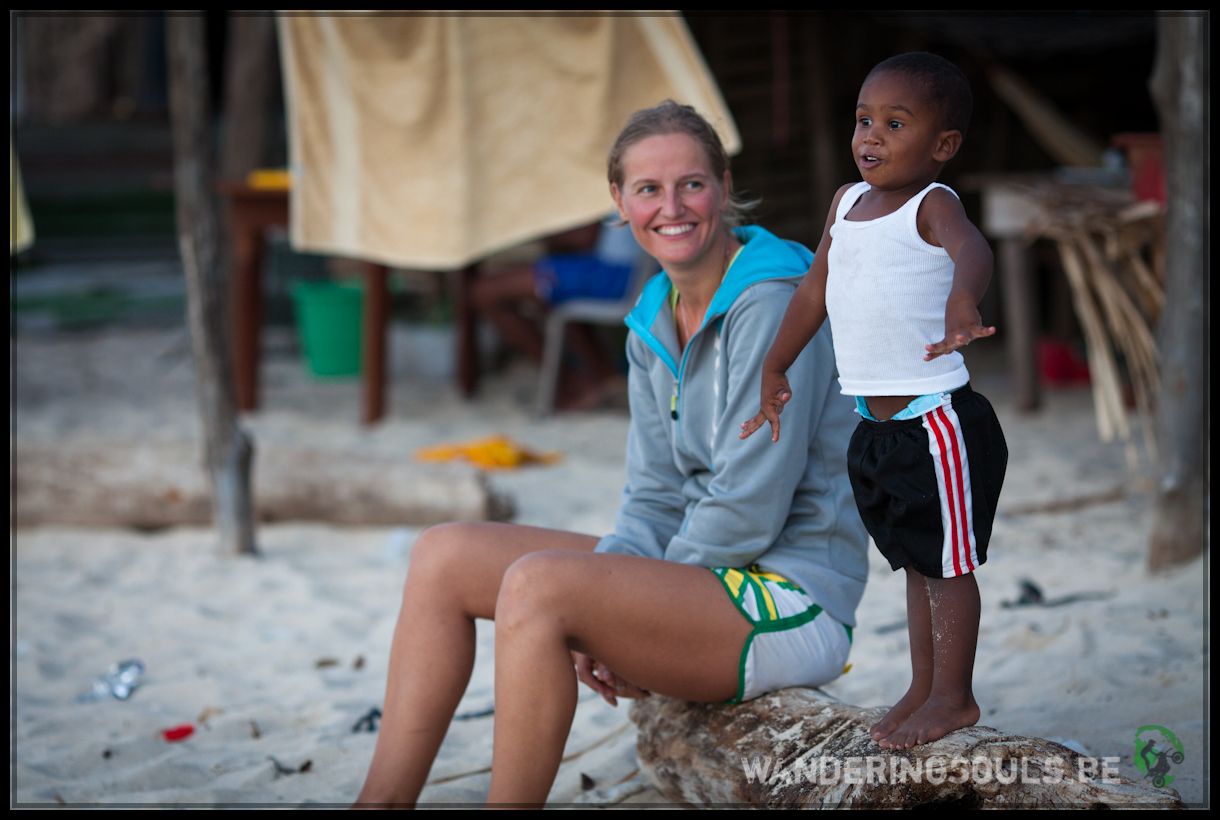 Jessica had told us that she and her fiancee would take us in their boat to one of the Cochino islands where we could go snorkeling and she would in the meantime do her laundry there (by hand of course). 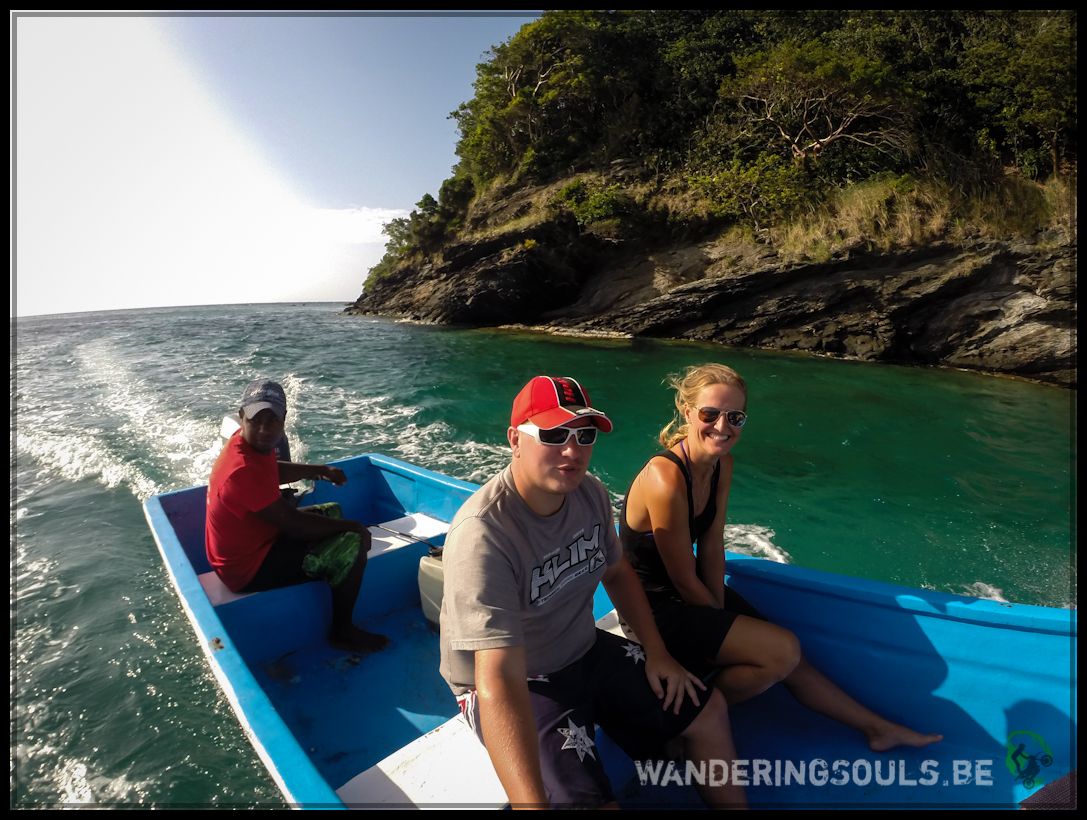 Jessica’s friend lived on the bigger island and has a natural fresh water source nearby where they get the water for the laundry and for their shower (read: put water in a big bucket and take a smaller one to pour over your head to wash yourself with. When you ‘shower’ like this you see how little water you actually need to get yourself clean because we didn’t even use half of the 20 liter (5 gallon) bucket for the both of us!) 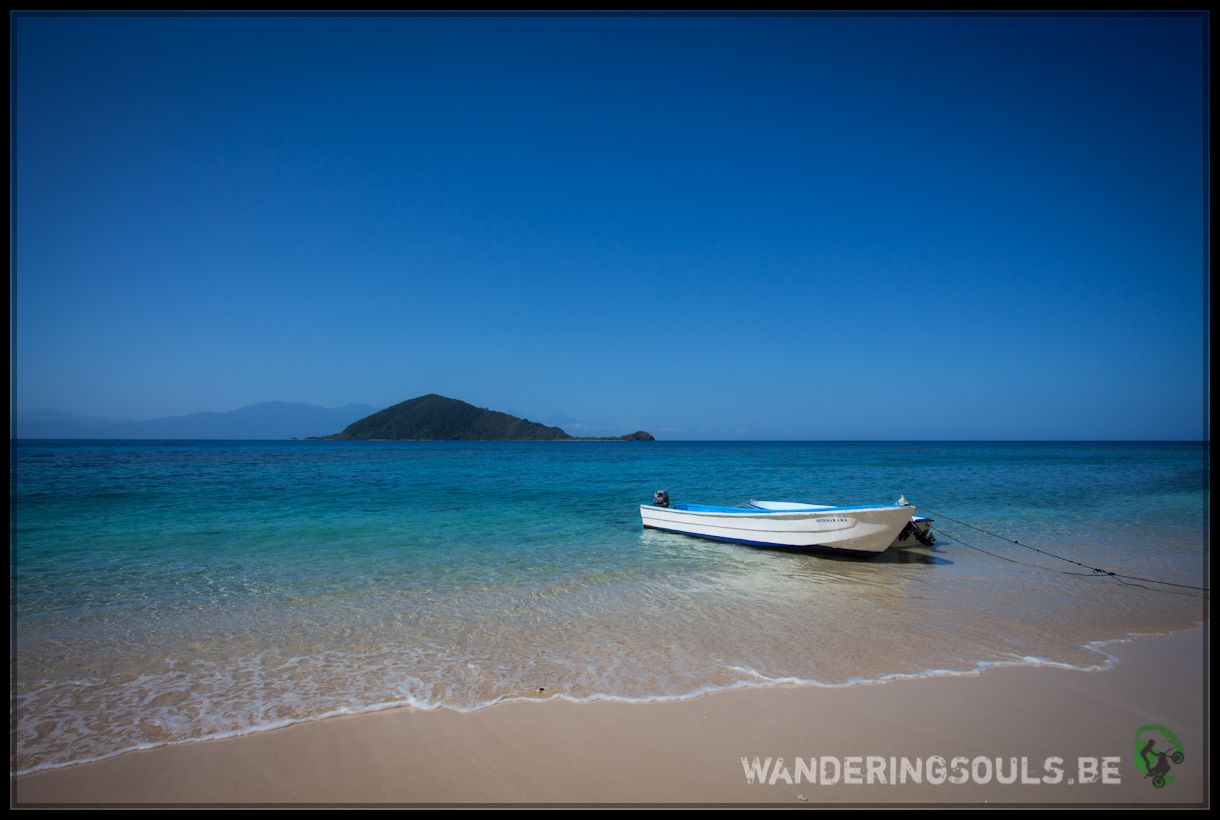 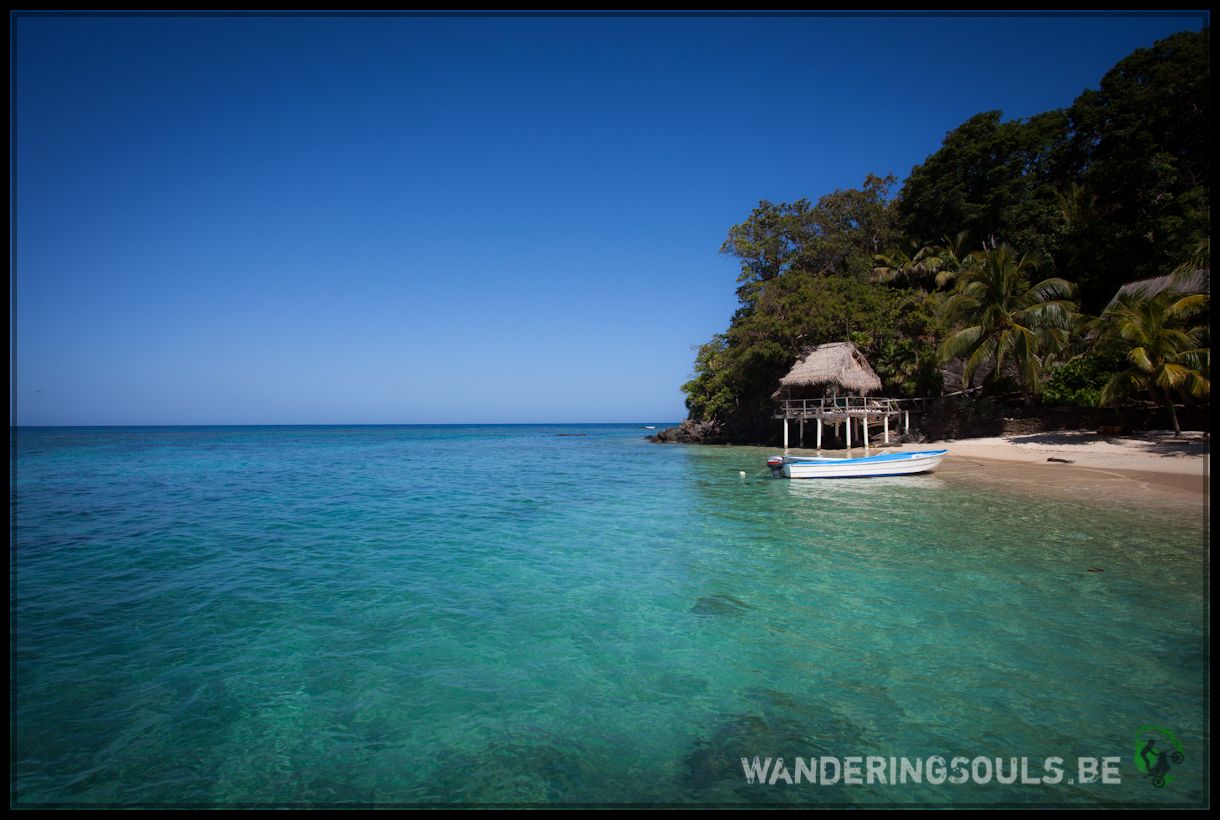 Snorkeling in the area was great, the coral reefs were amazing, the fish very colorful and bright and the water nice and warm. After some lazy time in the hammocks we went back to ‘our’ island for dinner and sleep because we had to get up at 4:30 in the morning to go with Malaka back to the mainland. 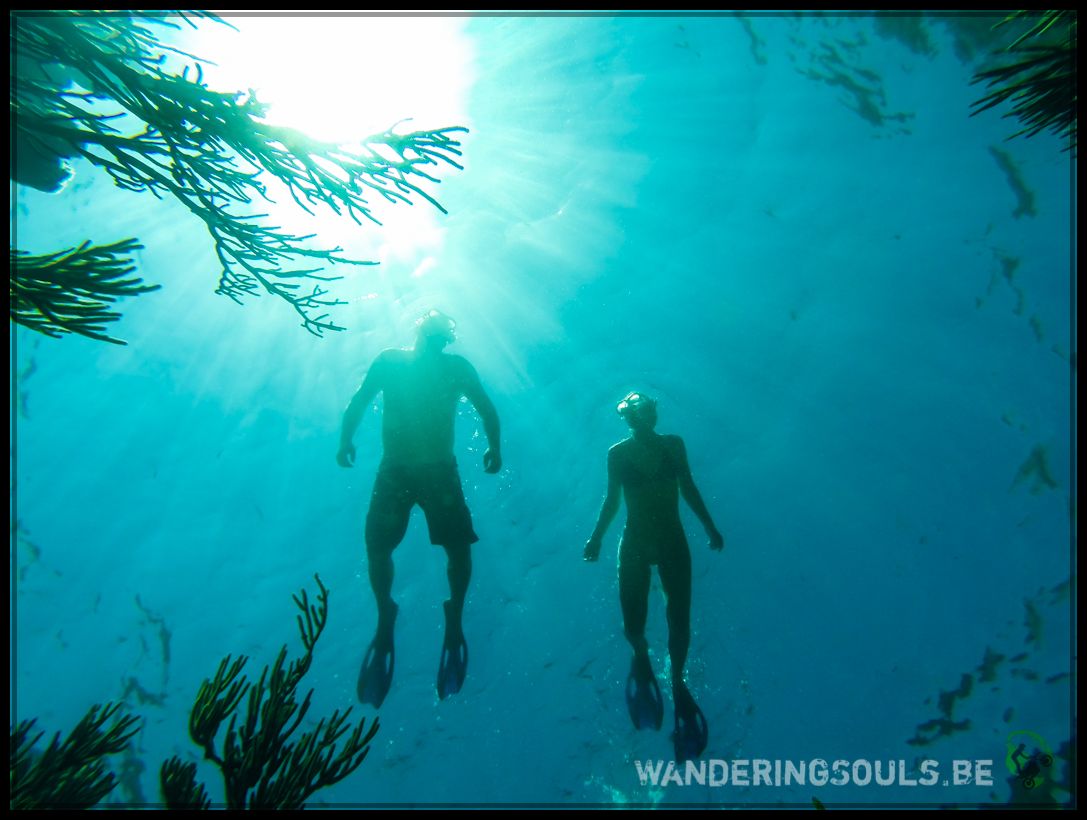 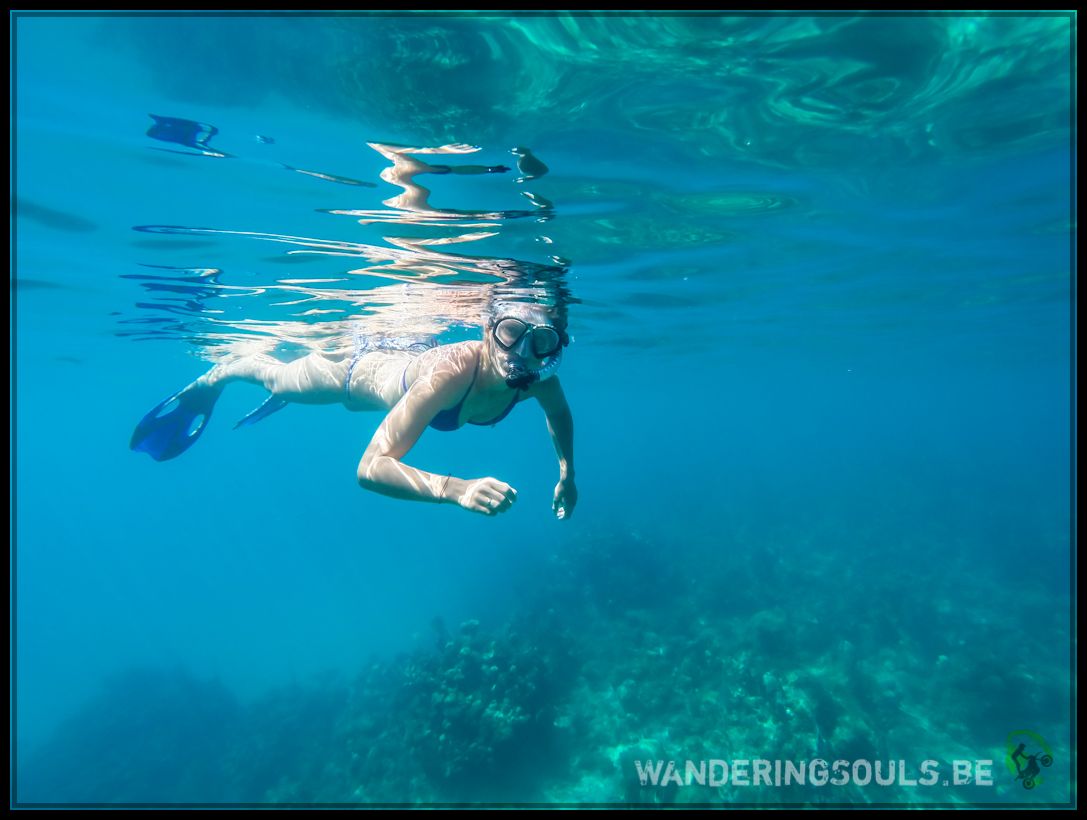 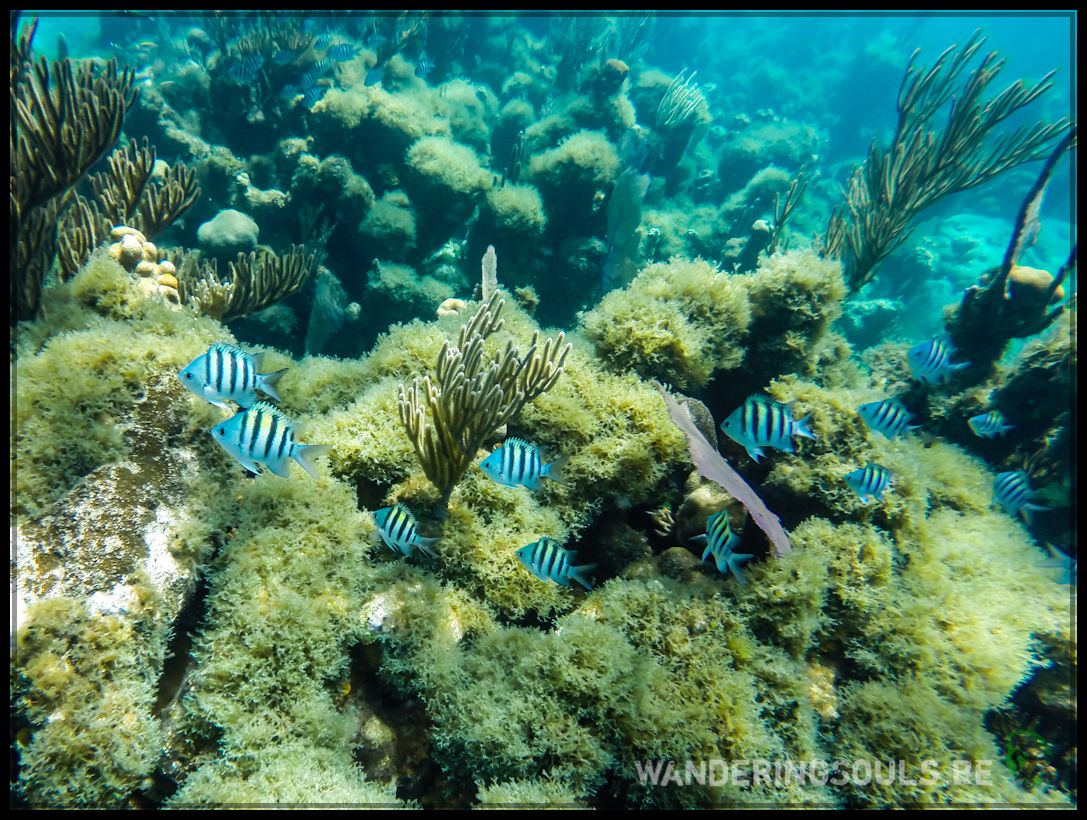 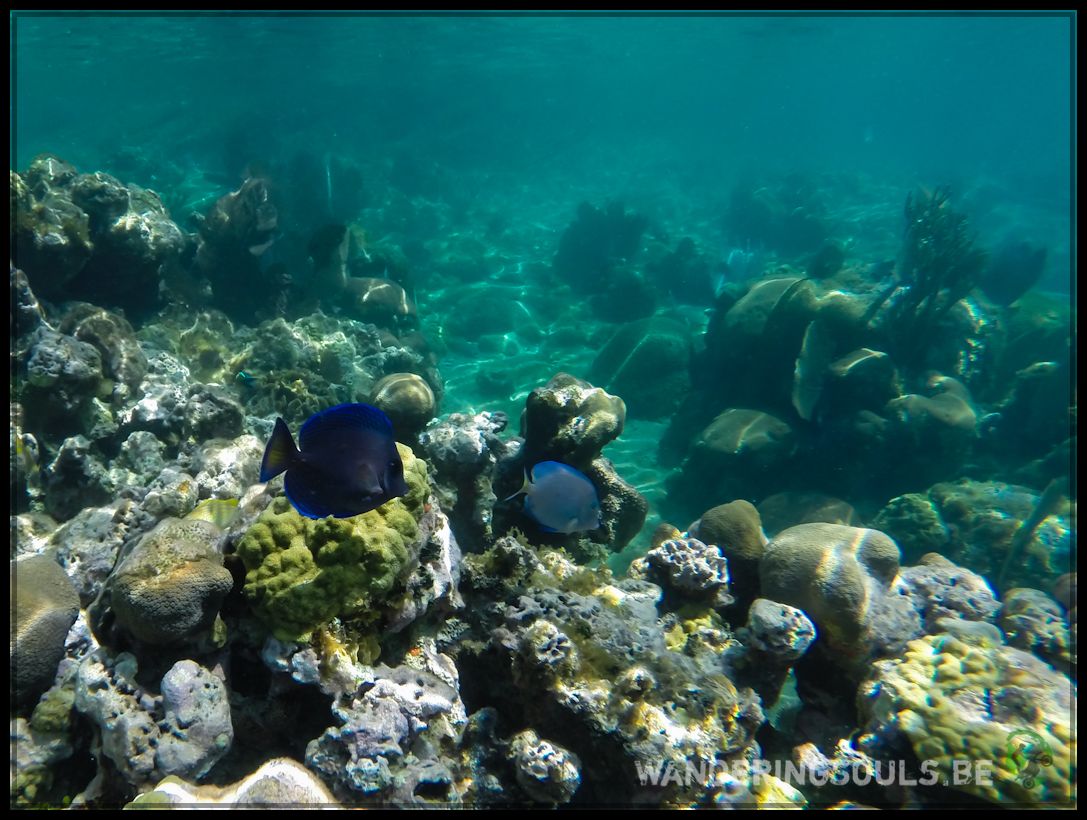 We didn’t sleep very well because their was a huge storm on the ocean and the wind kept waking us up, so with a sleepy head, and in the dark under the shining of the moon, we went to Malaka’s boat only to find that it was still empty. Leaving at 5 in the morning Garifuna time means 5:45 for Western people aparently. Malaka loaded the boat with empty crates of coke and beer, we took Jessica along who had to go to the mainland and another woman who asked if there was still some room left. Jessica had told us that the boatride over to the mainland would be very wet because the ocean was so rough and indeed it was. By the time we left, the sun was coming up and halfway along the way we were greeted by a group of dolphins who jumped up around the boat, leaving Paradise behind felt a bit sad at that point. 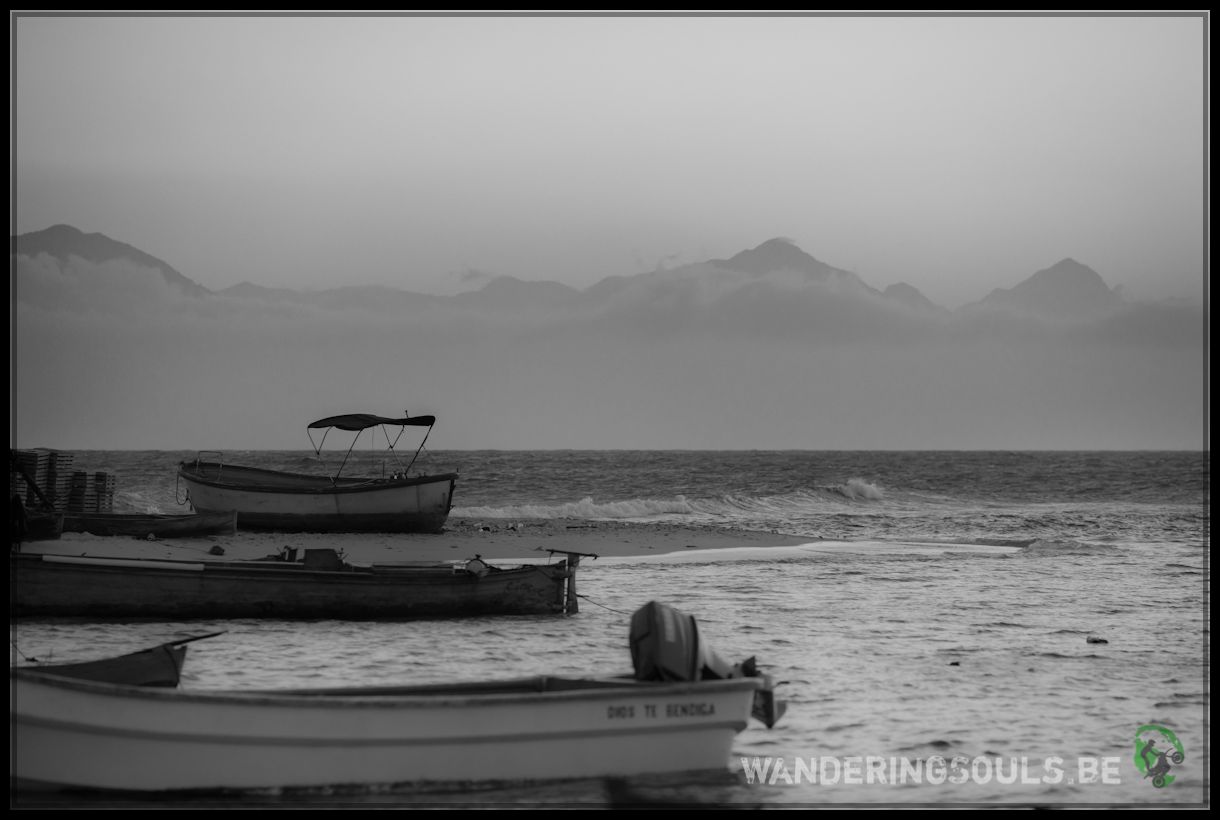 Because we had left later than we had planned, we missed our connection with our bus in Nueva Armenia so we had to wait there for 1,5 hour, but so did Jessica and Malaka because they had to be in La Ceiba also.

All in all we had a wonderful time on our Paradise like island but we are super sure that we do not want to live in Paradise anymore! 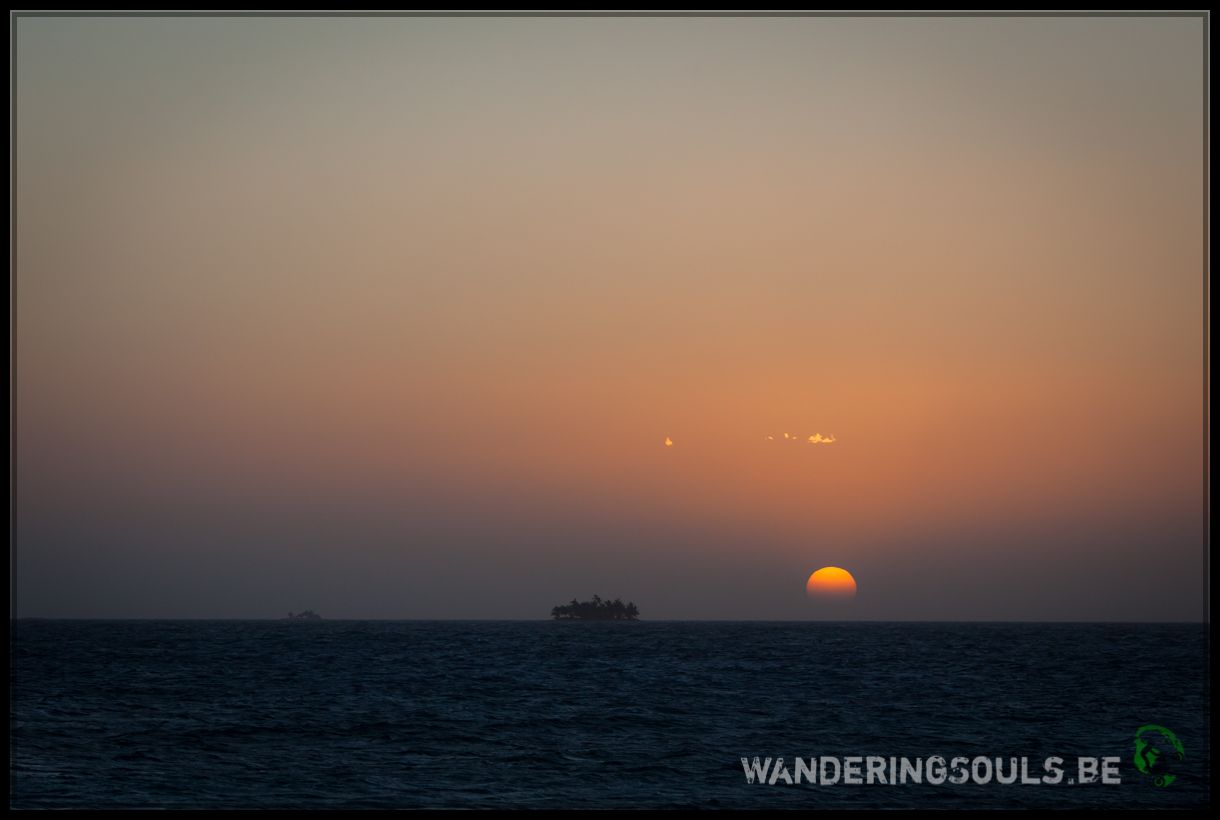