From one party to the next

Home/From one party to the next
Previous Next

From one party to the next

Since we are around the Christmas period, people are all busy with parties and food and those are just the two things we like! We like to meet people all over the world and we try to go couchsurfing from time to time (couchsurfing.org is a community where you can offer a place in your house to a total stranger for one or more nights and this way you can meet new people from all over the world) and we had a chance to stay with a wonderful couple in Kingman, Arizona. Nick and Anie and their cat Pilot were glad to host us for two nights in their lovely home and they invited us to come with them to an exclusive Filipino – American Christmas party they were going to, since Anie is originally from the Philippines. How can we say no to this right, but the only problem we had was that you had to dress up and Seb had to put on a long sleeved shirt. For me it wasn’t a problem since I have one little black dress with me for occasions like this, but we had to go last minute shopping for a long sleeved shirt for Seb. Nick and Anie were kind enough to take us to a very cheap local store where Seb found a 3 dollar shirt made in Pakistan!!

So on the evening of the party, we were ready to party-crash with Seb’s 3 dollar shirt. Everybody was really nice and the food was to die for! They served real Philippine dishes together with some local American food and they had plenty of choices for everyone. After the food, they got the party started and we got to enjoy the performances of Madonna, Lady Gaga, The Gangnam style group and many more, all Philippine versions off course! The host of the party was very kind and you could see that she had put a lot of effort in the party.

When we left Kingman, we passed by the “world famous” Radiator Springs. For those of you who don’t know this place, it was the inspiration for the movie Cars. A lot of cars that played a role in the movie where there, including Sheriff, the police car. 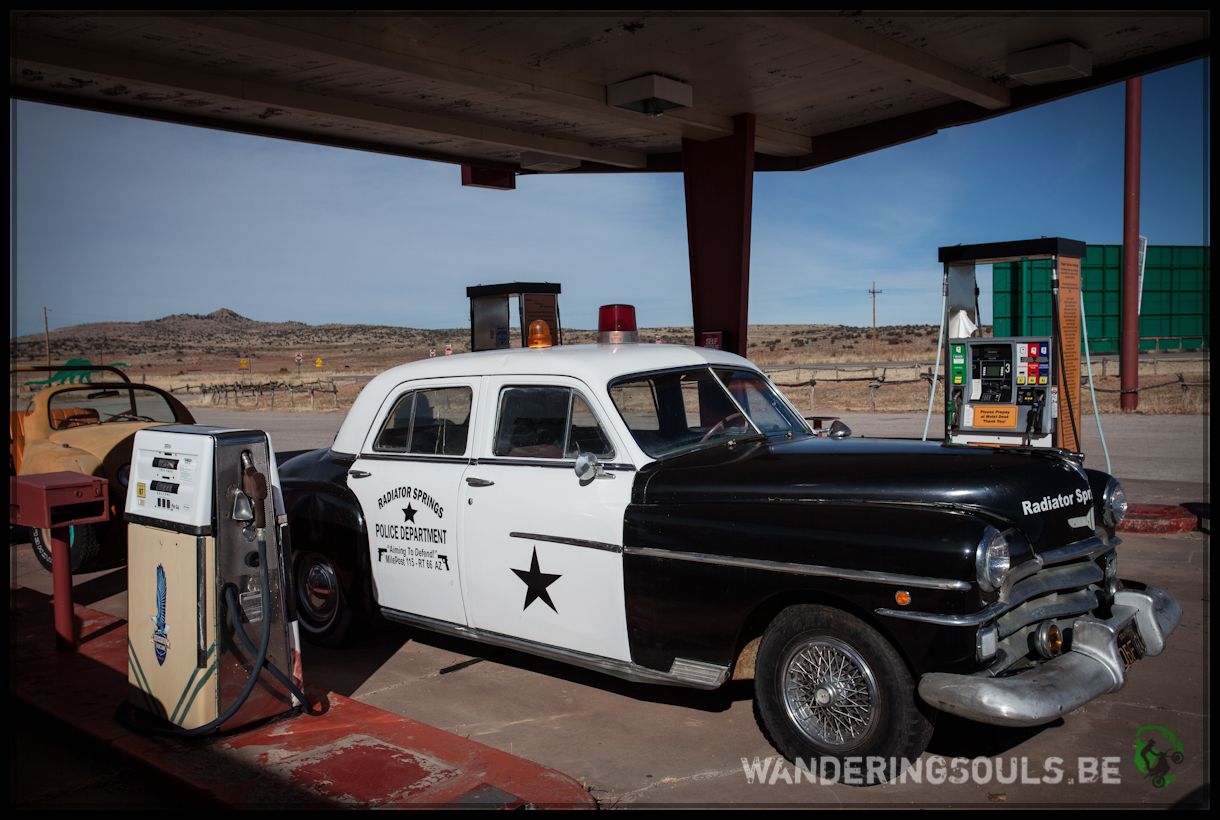 Standing beside the famous Tow Mater. 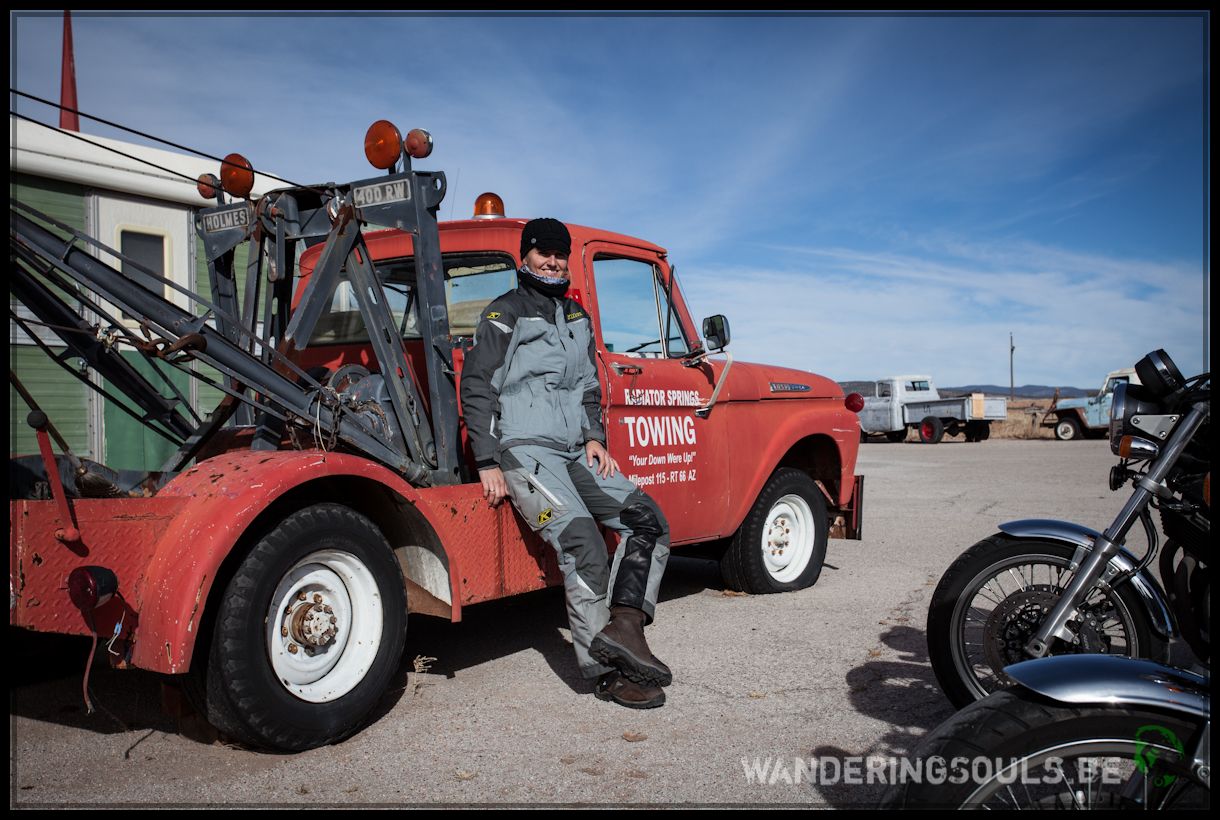 On the way to our next place we couldn’t miss out on Historic Route 66, so we took a small detour and stopped at some of the real cool places they have on Route 66. Being as it was a bit cold, there were almost no tourists, so we could enjoy our ride without any other traffic on the road, which was nice! 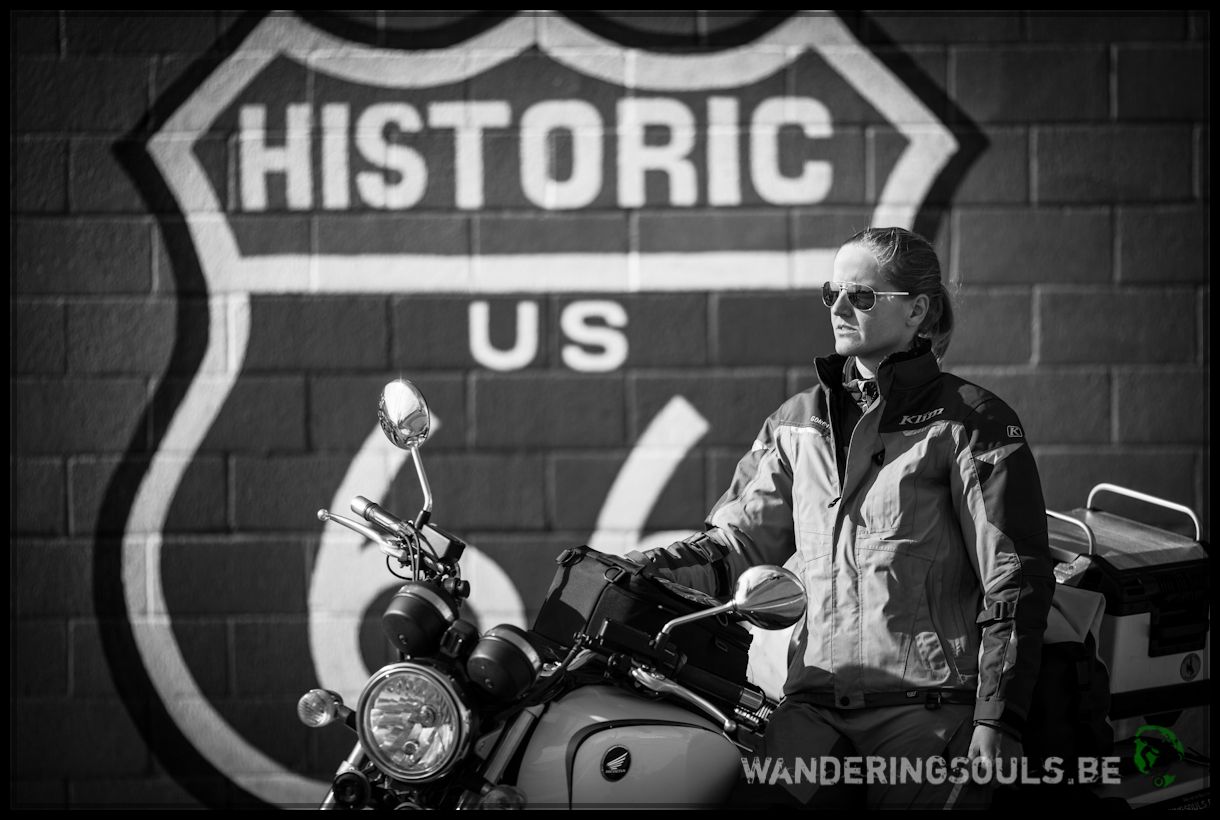 At one part along the road, it started to get even colder than it had been on Route 66 and we even found some snow. What do you do when you see snow, you put the bikes in it and take pictures of course. Although it wasn’t a whole lot of snow, we still enjoyed playing around in it, especially because we had such a clear blue sky that day. 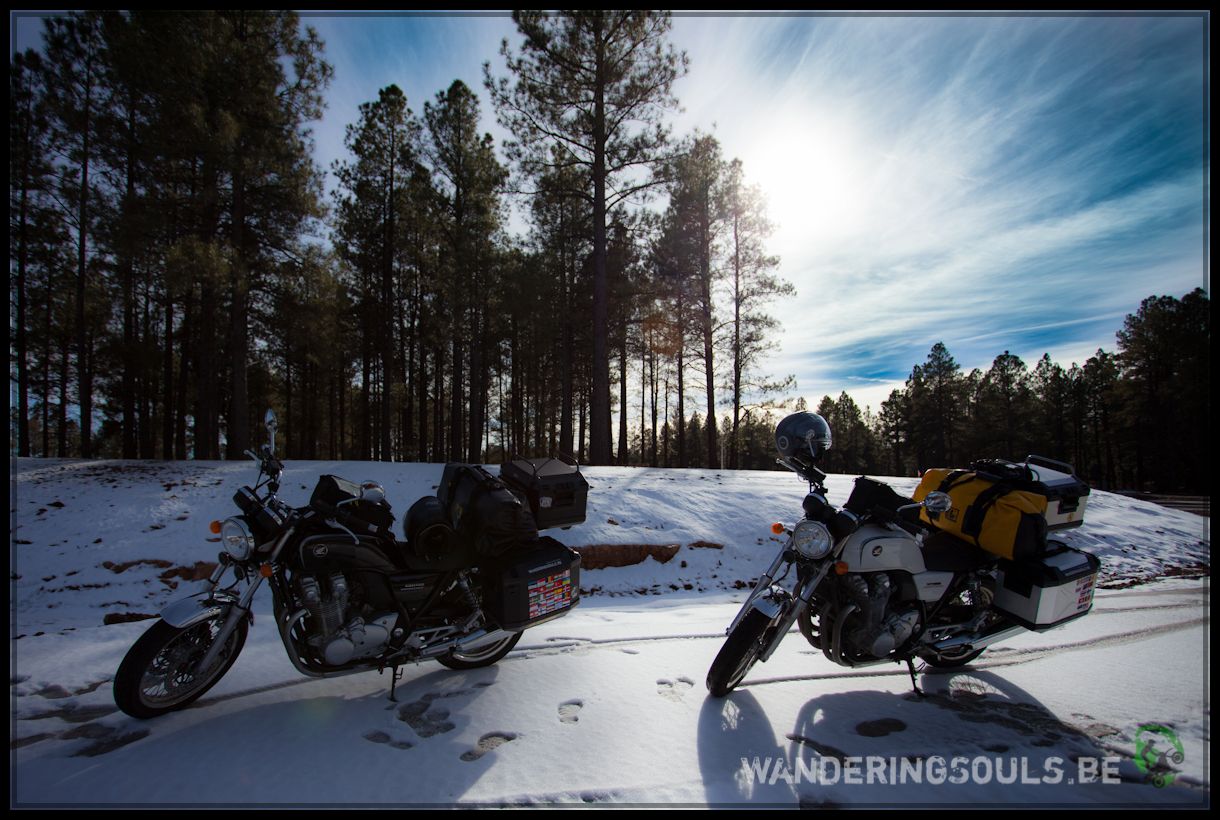 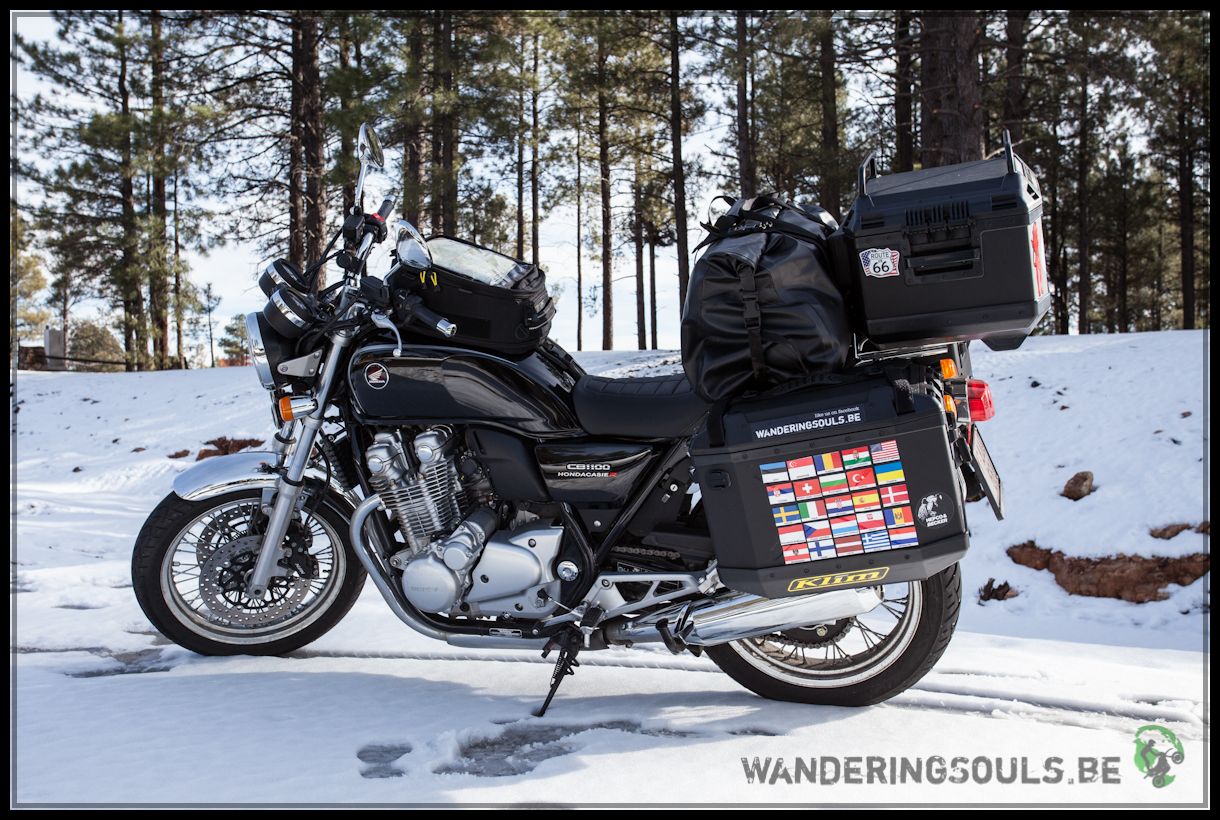 Seb is making a statement on his bike. He had two BMW R1200 GS Adventures before and he totally loved them, he said they were the best bikes ever, but since we are going retro, you have to make some kind of statement right?! 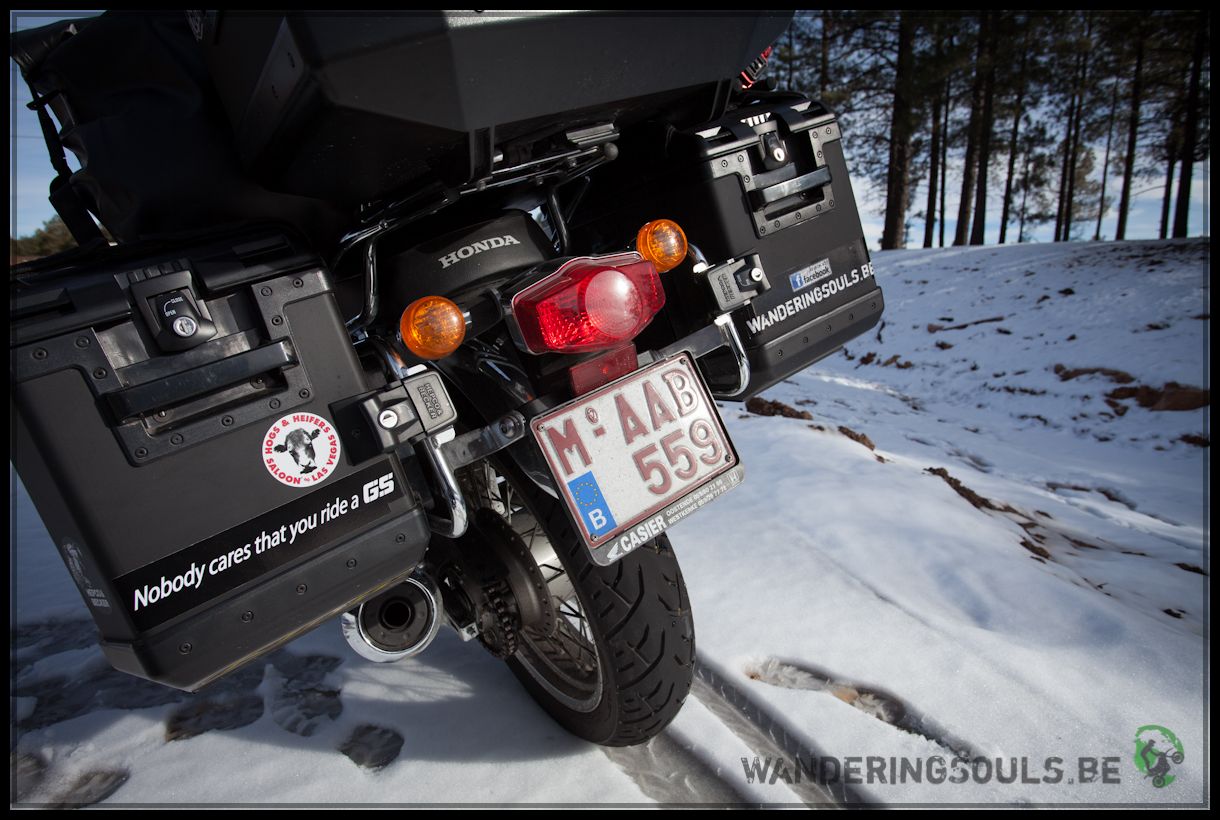 In Prescott, Arizona, we met up with Glenn and Sharon and their dog Deuce who were kind enough to open their house to us, even though they knew us from scratch! Seb had sent a mail to Dawn through tent-space on ADV rider (a website for motorcycle enthusiast who like to go adventure riding and like to brag about it, like us ;-)) but since she had moved recently, she didn’t have any room to host us, so she hooked us up with a couple she knew through their motorcycle group The Howlers. It was the first time Glenn and Sharon did something similar to this, so we were very glad that they were willing to accept us in their home for 2 nights.

Glenn had a real motorcycle museum in his garage with some fancy looking older bikes, like an old Ducati 750 and a Norton Commando 850 and he gave us all the necessary stuff to clean our bikes for the first time since we bought them. 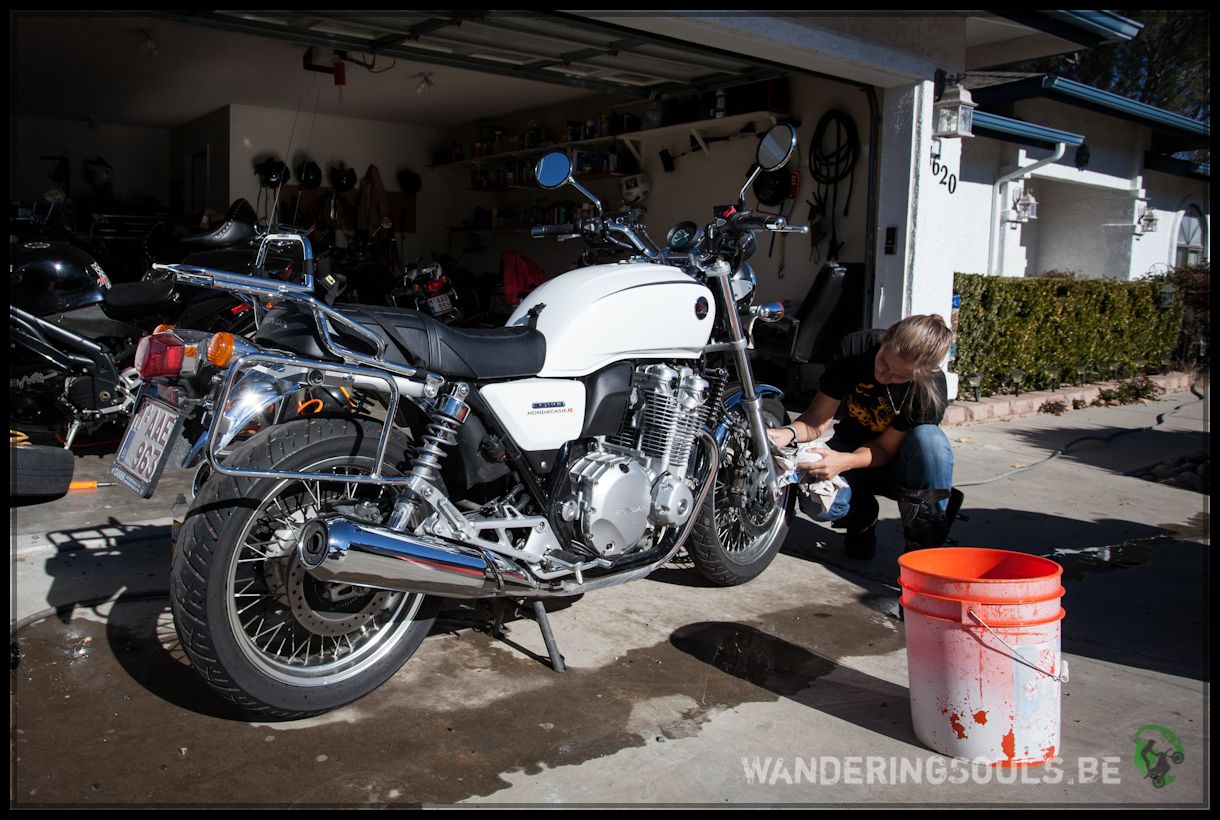 Look at that shiny chrome, thank you again Glenn for the Mother’s Polish!!

In the evening Glenn and Sharon took us to a local place for dinner and we got to meet Dawn and one of the other members of the Howlers. We had a wonderful time and we had a chance to meet some like minded travellers. 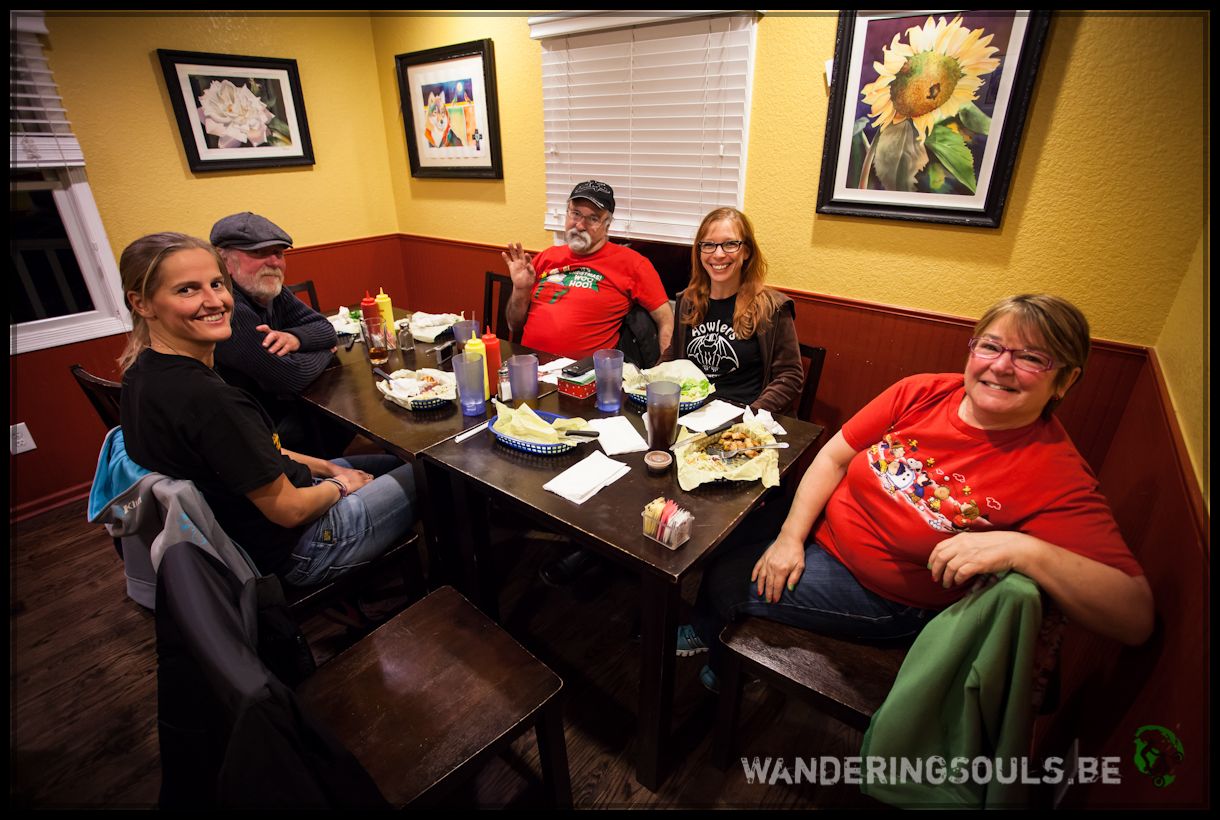 A few streets further down Glenn and Sharons place, we found this very cool house that was totally in the Christmas spirit. Sharon told us the story behind the 19 heroes on the roof and that was kind of sad. They had an elite firefighter squadron, called the Hotshots and in June 2013 they had to fight a fire in the Yarnell hills northwest of Phoenix, Arizona. They were all killed when the out of control fire changed course because of a sudden wind change. One guy survived because he was on the lookout, but when he tried to warn his fellow firefighters, he was too late. I thought this was a nice tribute for those brave men! 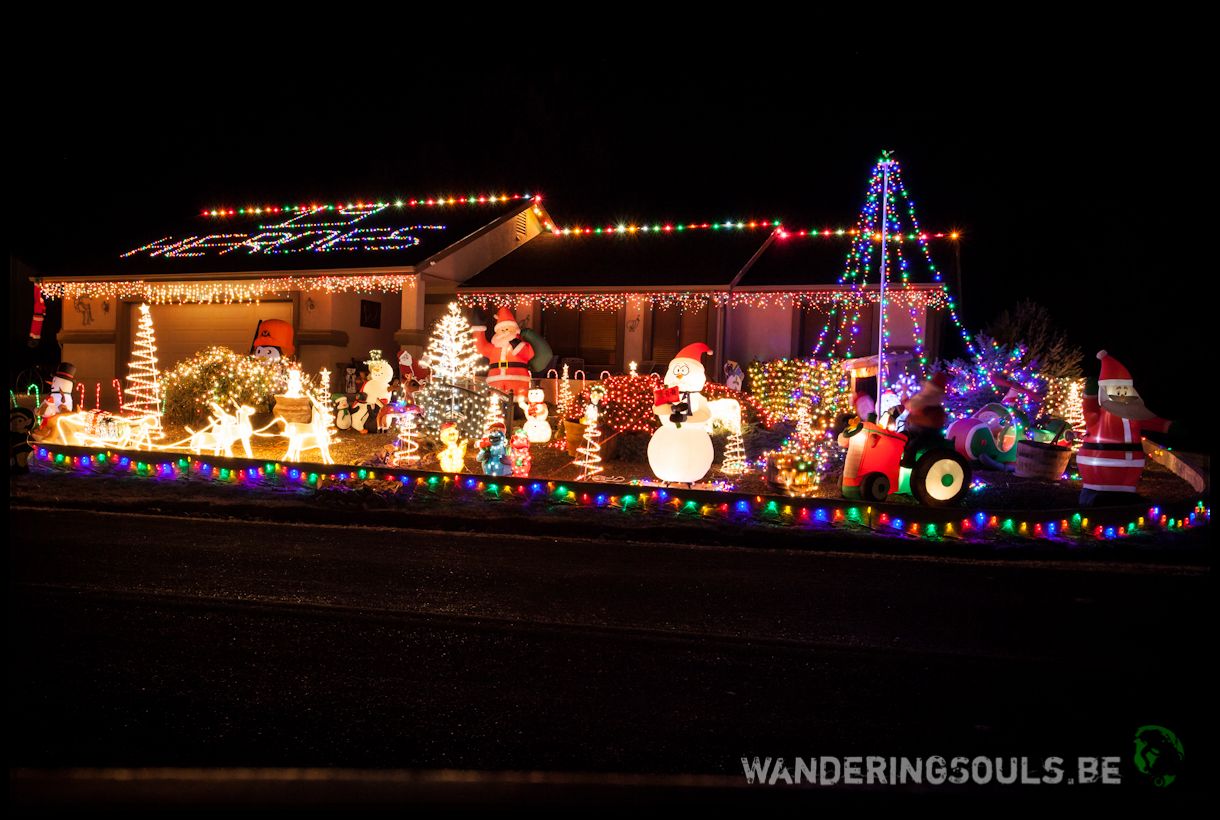 When we arrived at Mark and Rose’s place in Mayer, Arizona, they had a gift waiting for us under the Christmas tree. It was the Scala Rider G9 Power set from Cardo. It’s an intercom system for both our helmets so from now on we can talk to each other and listen to our music while we are riding. So THANK YOU CARDO for the gift! I’m glad that there is a mute button on the headset, so I can mute Seb when he’s nagging me too much, or is it the other way around…?! 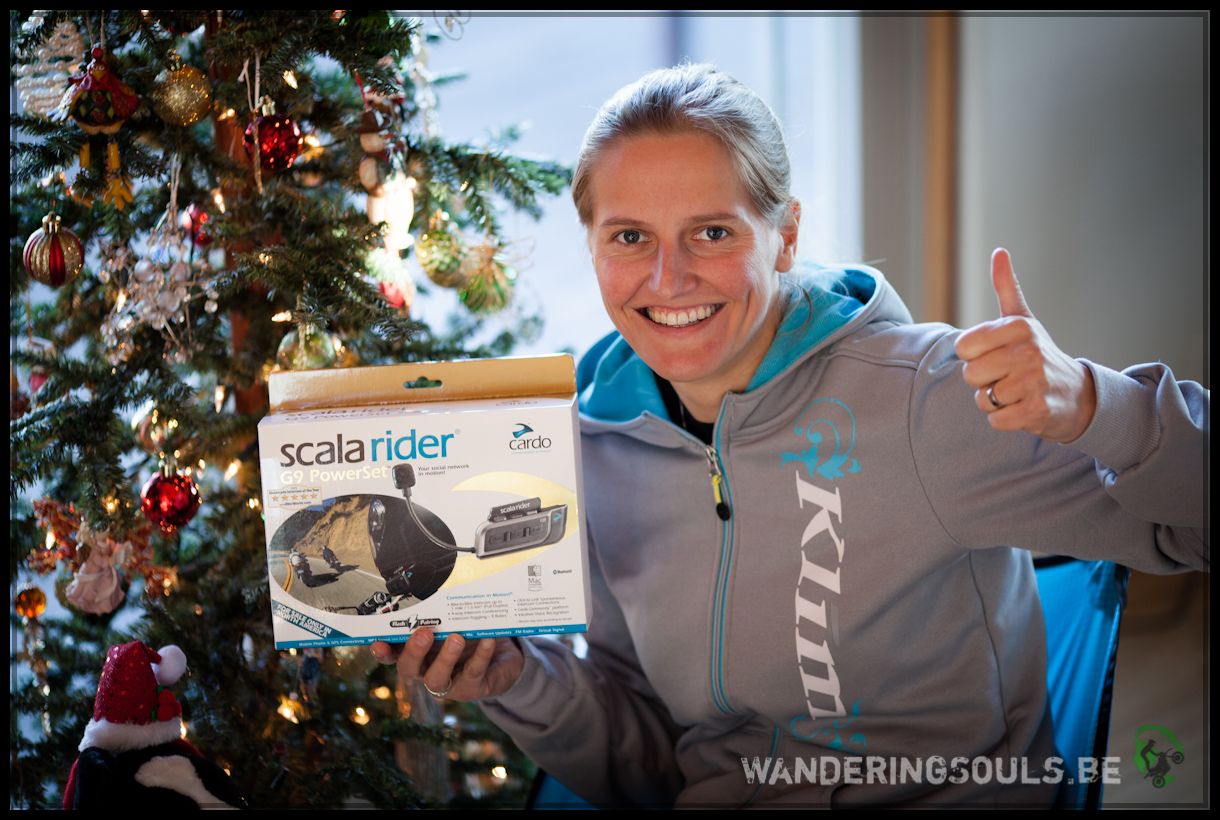 Our Lego version of Christmas with Mark and Rose: 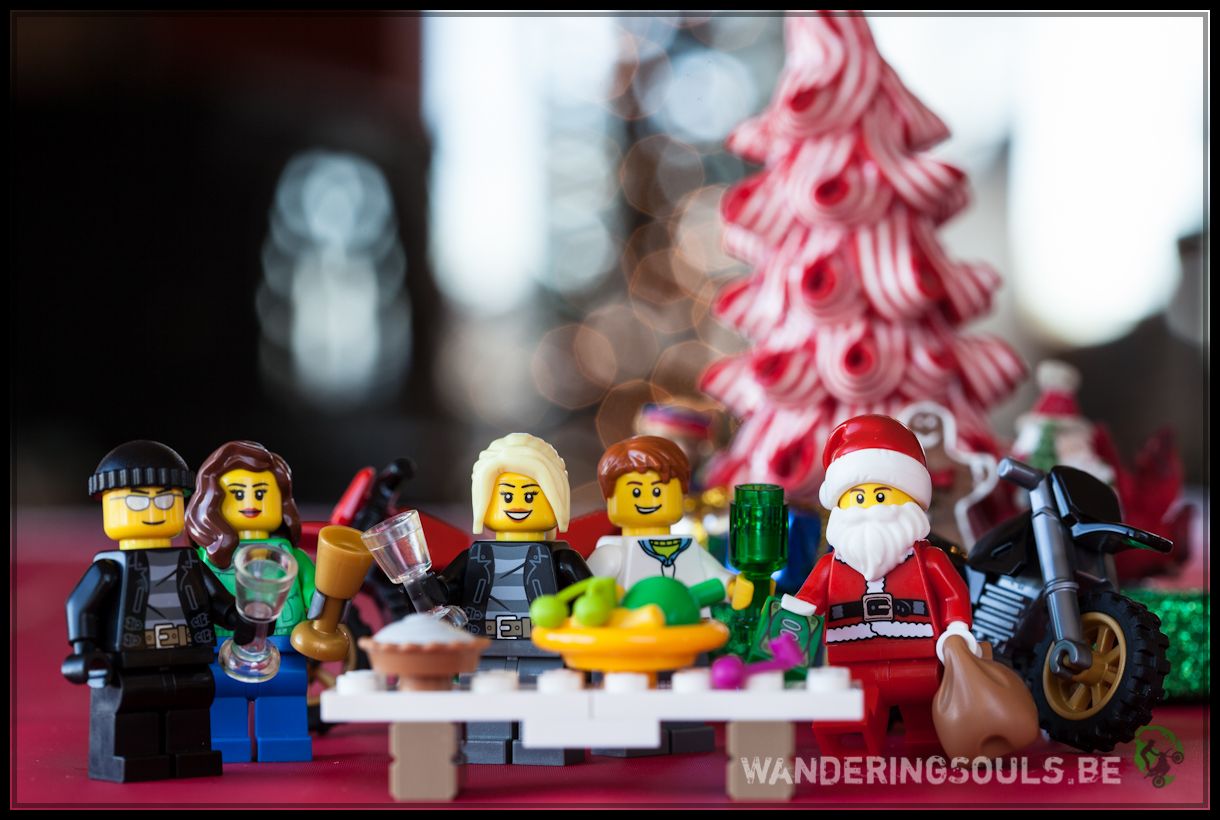 Mark has in his garage (next to his BMW GS) a Polaris Ranger! There’s nothing better in Arizona than to go and explore and have fun with an ATV in Mark’s HUGE “backyard”! So off we went for a micro offroad side adventure for a couple of hours. 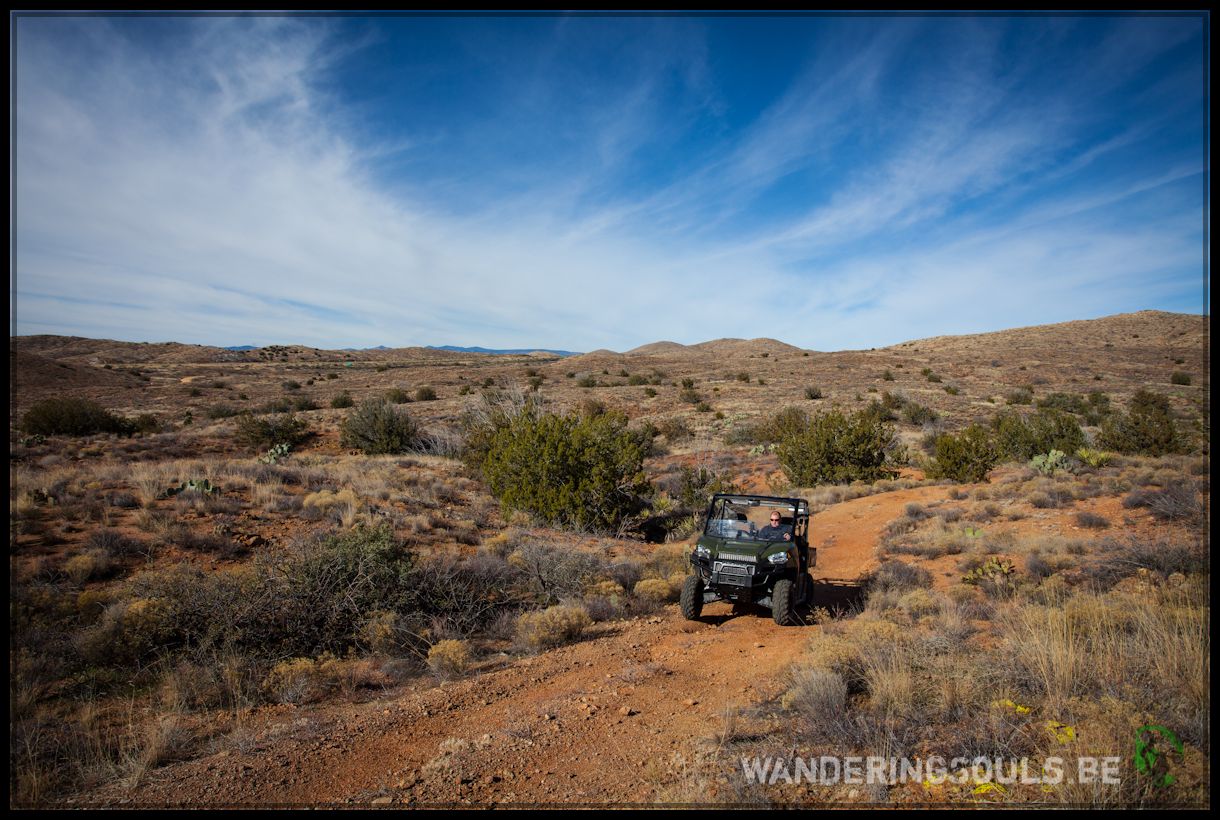 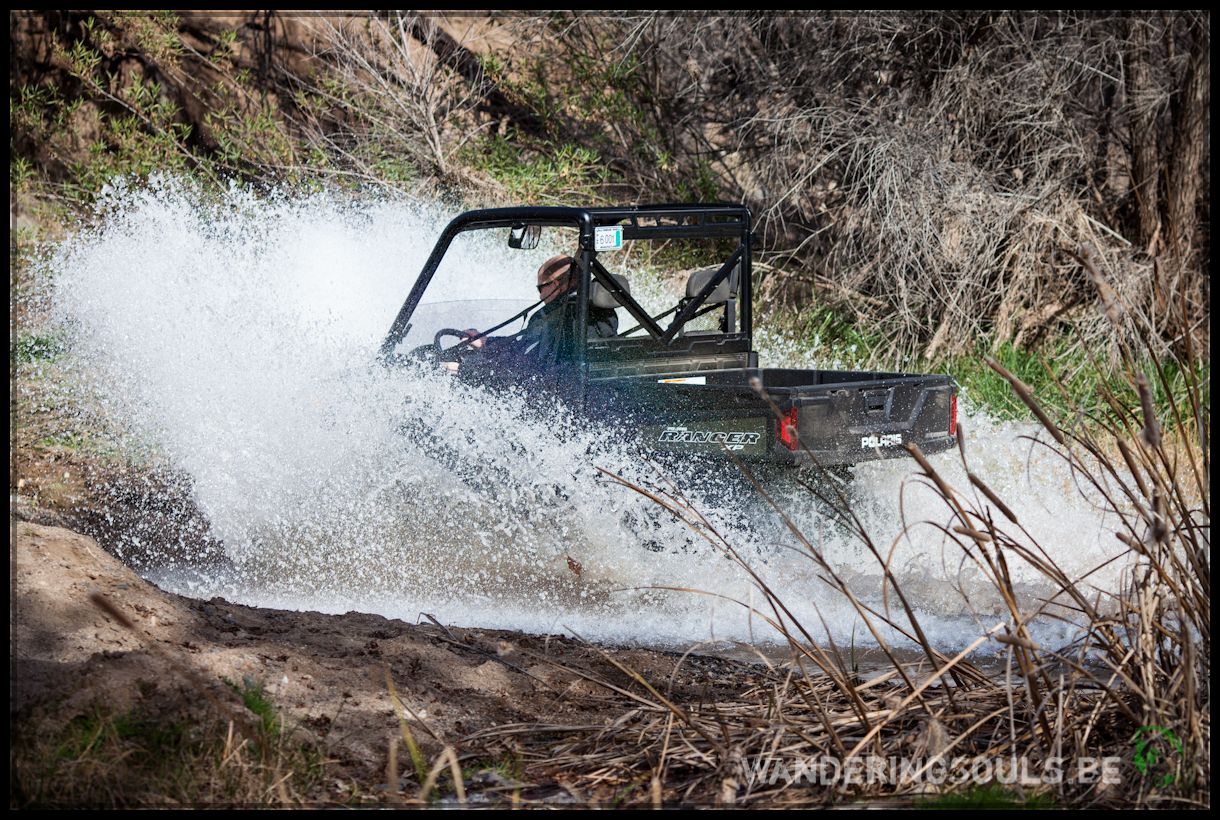 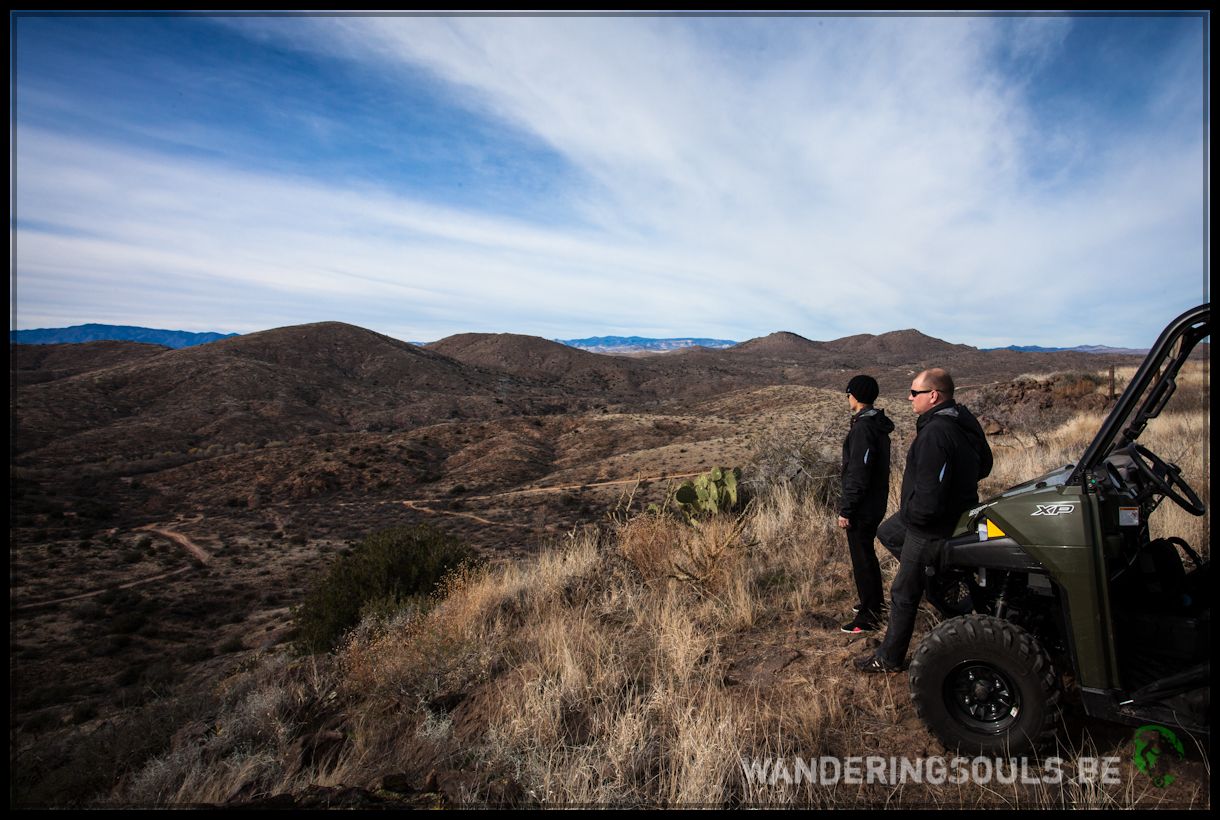 In the meantime Kim got sick. She has a sinus infection and she can’t breath through her nose and just looks miserable, so we decided to wait a bit before continuing our trip down into Mexico.

On Christmas eve we had a very nice and big meal with Mark and Roses whole family and we even got some cool bags made out of recycled bicycle tires and yoga mats.

We went to the movies on Christmas day! I wanted to see “American Sniper” it would have been perfect to see that movie in Phoenix, AZ but it wasn’t out yet… bummer! We went to the première of “Unbroken” instead. Great movie! 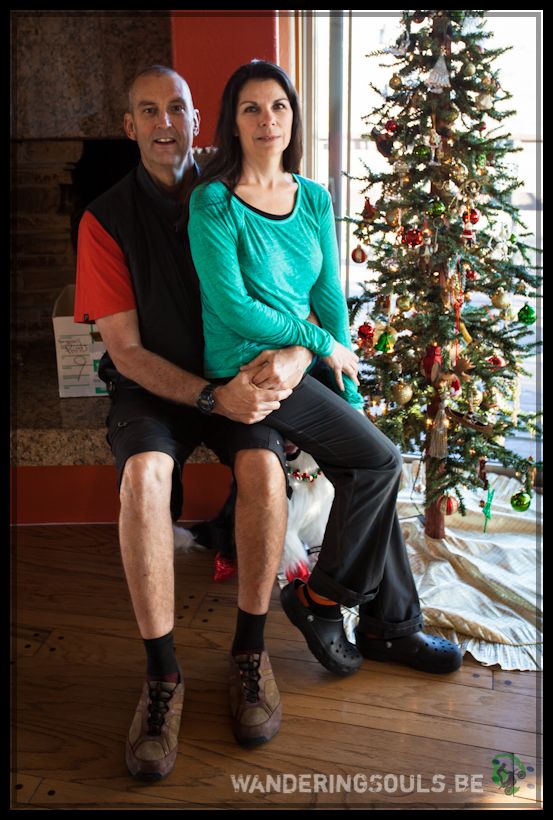 Thank you Mark and Rose for having us!

I have some time to kill, so what can you do when in southern USA… 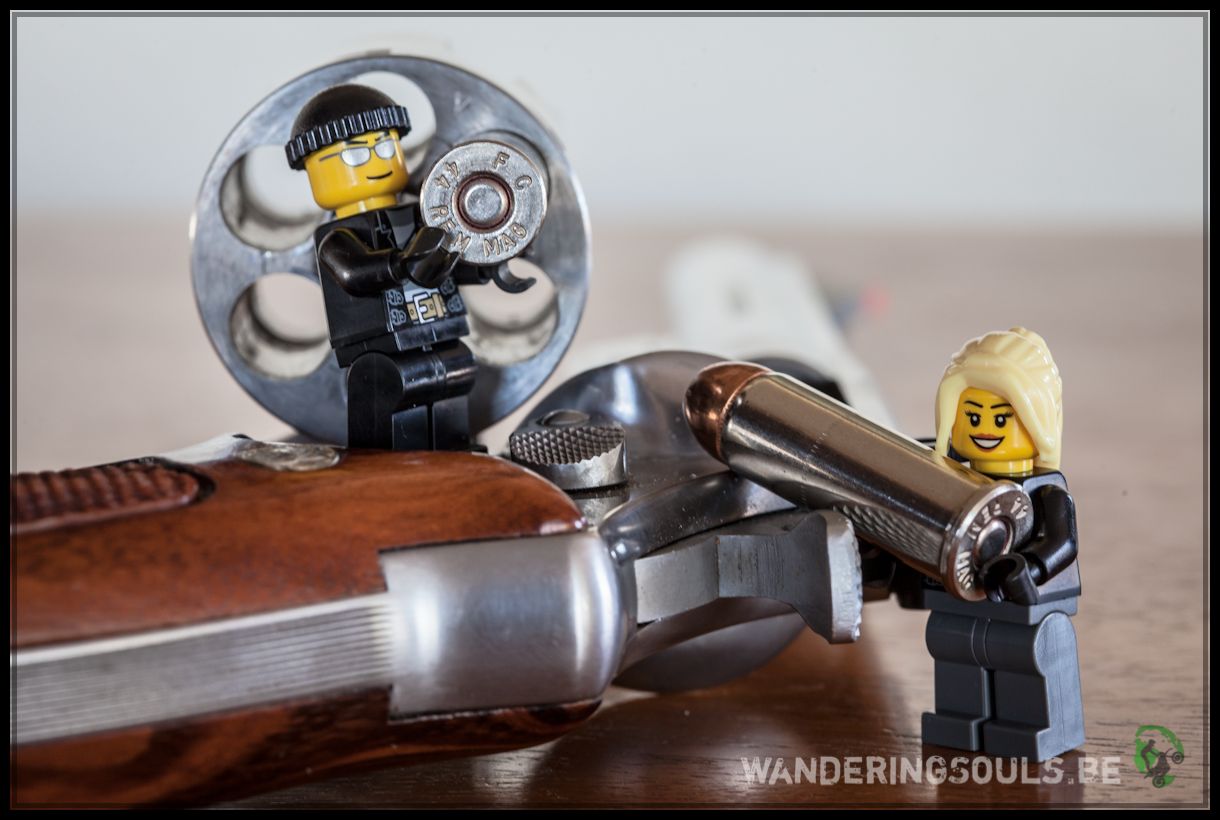 Today we left Mayer, Arizona, and so we should be in Mexico the day after tomorrow!