Sorry that we are more than a week too late with this update, but here goes:

Well, what do you do when you sell the bikes and have to make a stop over in Istanbul… you plan to stay there for 3 days of course. Seb has been here before with his parents a long time ago, but since I have never been in Turkey, it was a good opportunity to stay here and it was cheaper than to catch the plane the same day to Belgium, go figure! 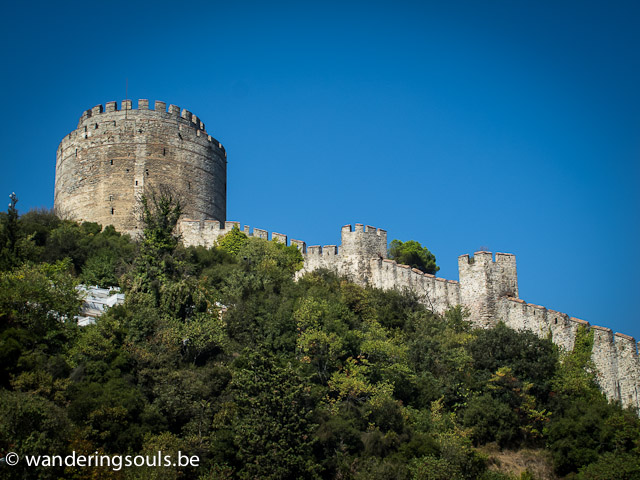 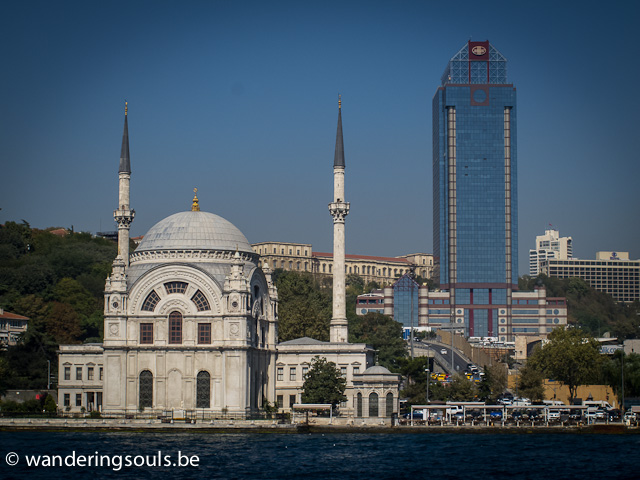 We arrived early in the morning after a nerve wrecking flight for Seb. There was a mother with child behind him and the child kept kicking his seat, tapping on his head and coughing in his ear! Seb had turned around a few times and gave the mother ‘the look’, but it didn’t seem to help much and since she couldn’t understand a word of English he couldn’t even ask her nicely to do something about it. 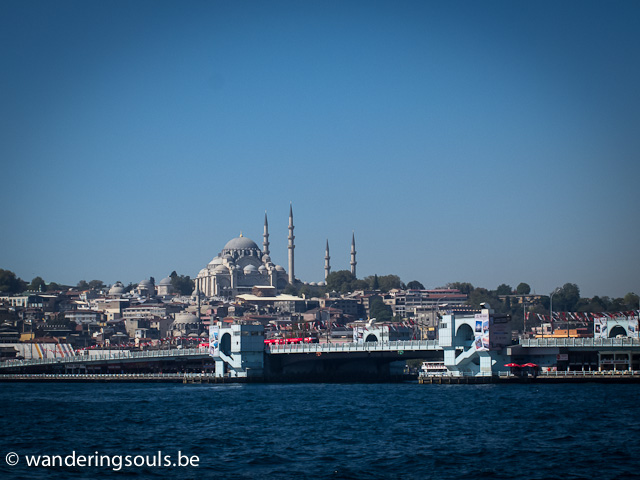 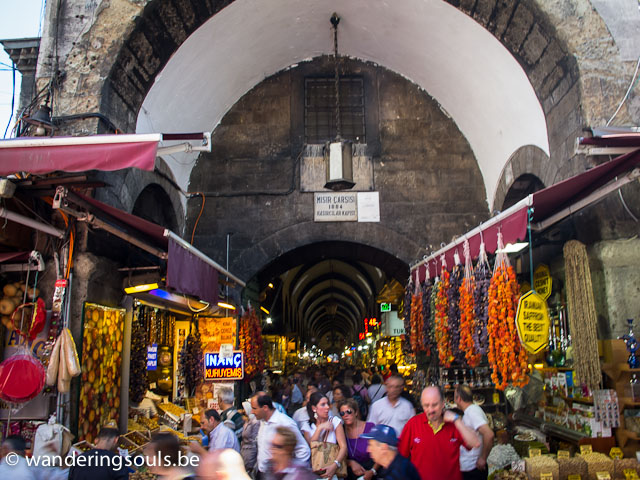 On the taxi ride from the airport to our hostel, it hit me just how big this city really is, it is enormous! It just keeps on coming. We dumped our luggage in the hostel and off we went to see the city. We hopped on a Bosporus boat tour that showed us the most spectacular sights that lined the Bosporus. This time I only got sick while the boat was still docked, but once it set itself in motion, I was ok. There are a lot of cruise ships that line the quays of Istanbul and they bring tons of tourist each year. The bridges over the Bosporus make you think of the American version in San Francisco, but here they have all kinds of restaurants that are underneath the bridge. On the left side you can see Europe and on the right side Asia: 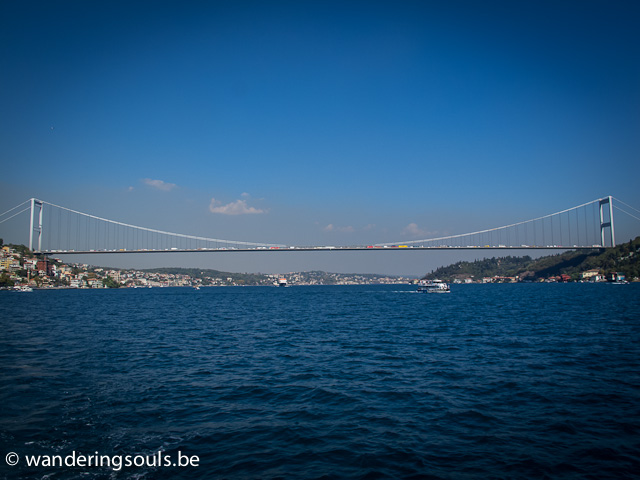 For the first time after more than 100 days, you feel as if you are back in Western society. Stupid example but we saw a Mc Donald’s again after more than 100 days and it just felt so familiar again. After seeing the prices here we weren’t as glad anymore that it was feeling familiar anymore, but hey, you can’t win them all!! Istanbul is a bubbly city, it has a great ambiance and a strange mixture of modern and conservative. We were warned that the carpet sellers might try to hassle you, but this was definitely not true, it’s the people from the restaurants now that won’t leave you alone! “Oh miss, mister, come and eat here! You seem very hungry…” hearing this after you just left your table at the restaurant next door and the thought of food just makes you gag….hhmmm! We ate some real Turkish food that is cooked in a pot and brought to you on a burning plate while it is still in the pot. They brake the bottom half of the pot open at your table and serve the steaming hot food with some rice and French fries, oh heaven! 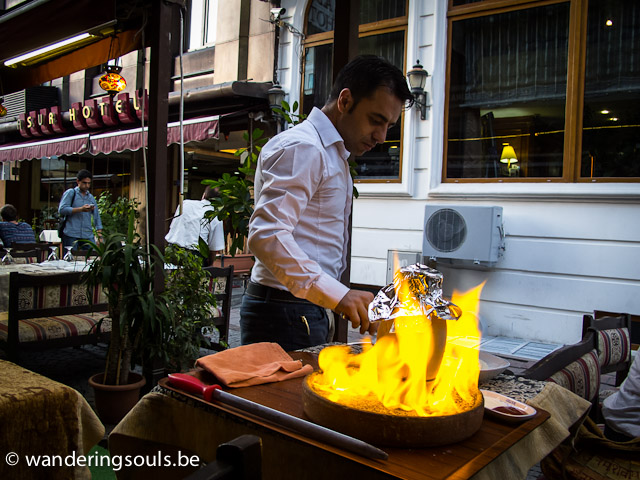 The next day we took a guided walking tour spread out over the whole day. We were only 5 of us with our guide, so it was easy to hear all the details about the sights we visited. The tour was ok, because we saw all the main sights here in Istanbul, but we don’t know if we would do it again though because it was actually very expensive for what you got. We first went to the Topkapi Palace museum with all it’s courtyards and all the very shiny jewellery that was on display. Because of one of the cruise ships that was in the city that day, it was super crowded and we had to wait in line for a long time before we could see most of the sights. After the Palace we went to the underground water reserve of Yerebatan Sarnici. It was used as a reserve during the Ottoman period, but now it is only for tourist purposes that there still is some water in it. They even added a few big fish to please the public. It still is spectacular to see though, even if you have to dodge all the other tourist and try to not topple over into the water from time to time! The structure of the building was amazing and the lights in the right places made it even more beautiful! 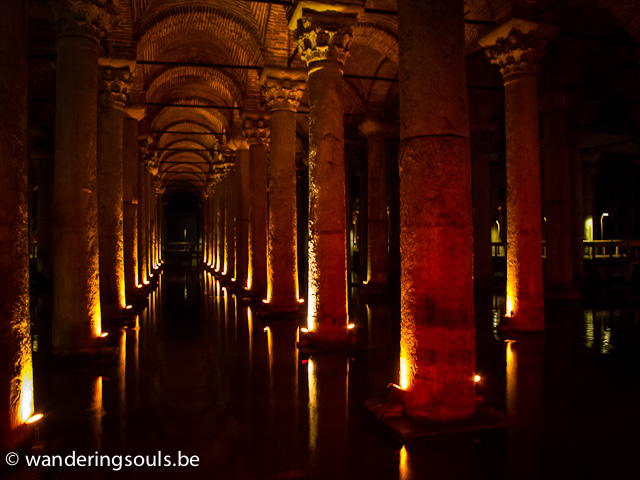 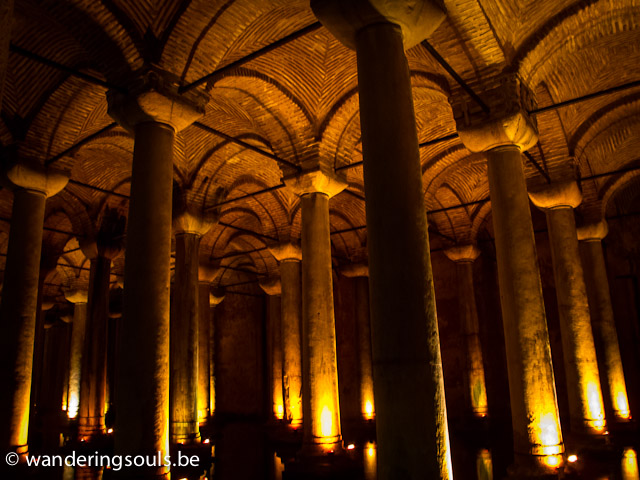 Because of the Friday prayer, we had to see the Blue Mosque in the afternoon, but first we took a look in the Hagia Sophia Museum, the church that was turned into a Mosque and which is now a Museum. It truly is great to see a mixture of two God’s in one breathtaking place. They have plastered over all of the mosaics because they didn’t want all these pictures of Jesus in the Mosque, and now they are trying to uncover most of the mosaics again so you get a truly confusing feeling with all the Arab writing on one side and with the Virgin Mother on the other… It truly is a very amazing place. 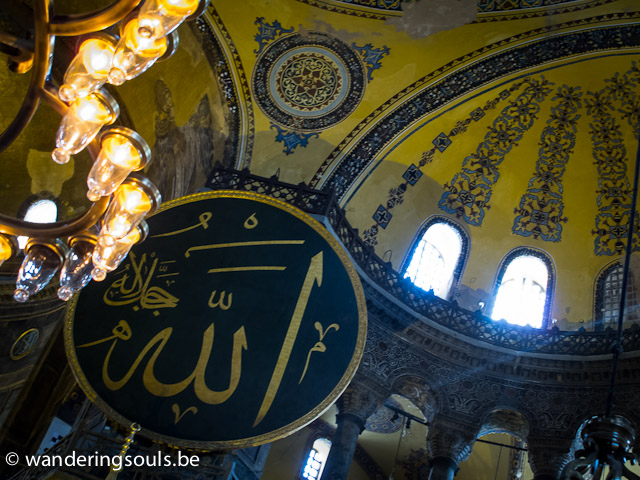 Last but not least we went to the Blue Mosque and you guessed it, there was a huge line to try to enter it! So after more than half an hour (it felt like the line in an amusement park), we reached the place where we had to take off our shoes and put on a scarf to cover our self. Oh man, I can not even try to explain the smell in that place…! Smelly feet all over the place and everyone had to put his shoes in a plastic bag and take it with them into the Mosque, oh the horror!!! Taking away the smell the Mosque was a brilliant sight though. The only downside were all the wires hanging from the roof to the huge chandeliers. This messed up the view a bit to the dome, but for the most part it was beautiful. 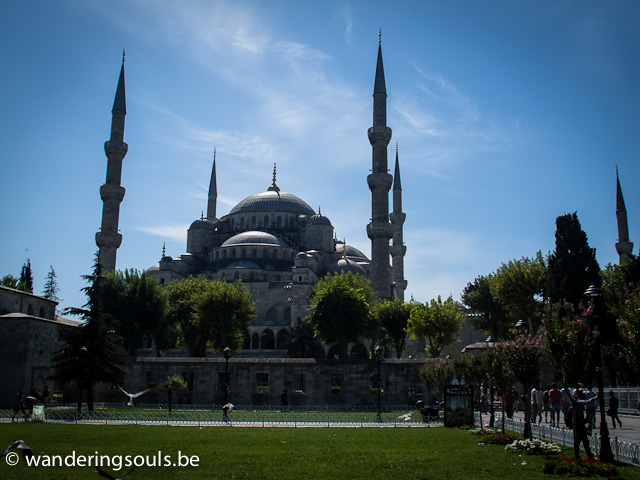 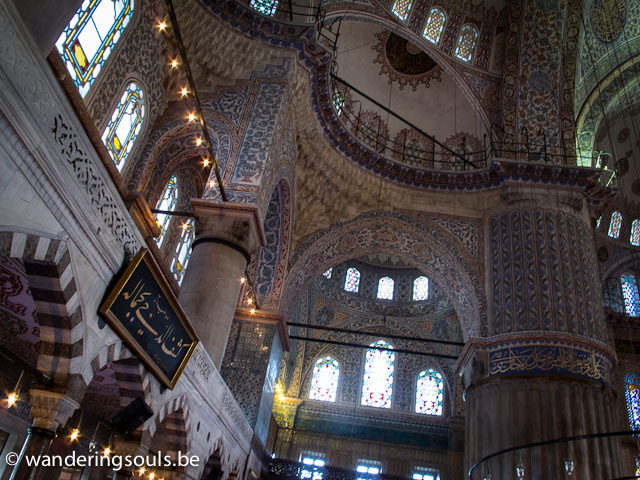 After the whole tour we went to enjoy a free performance in the street of some of the countries that are on the Silk Road. We saw some great dancers and they even had some stalls from all the countries with authentic things. They even had a real Kyrgyz yurt on display, but it was not as beautiful as the ones we saw on the road! 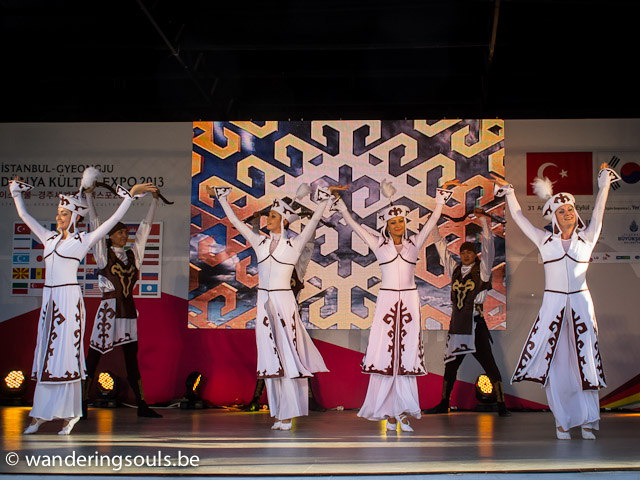 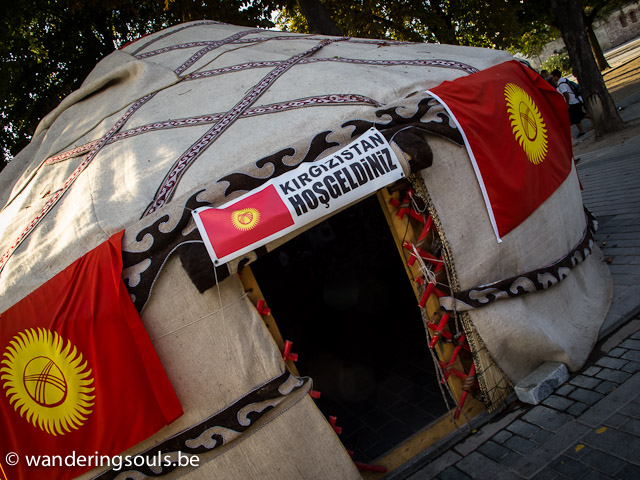 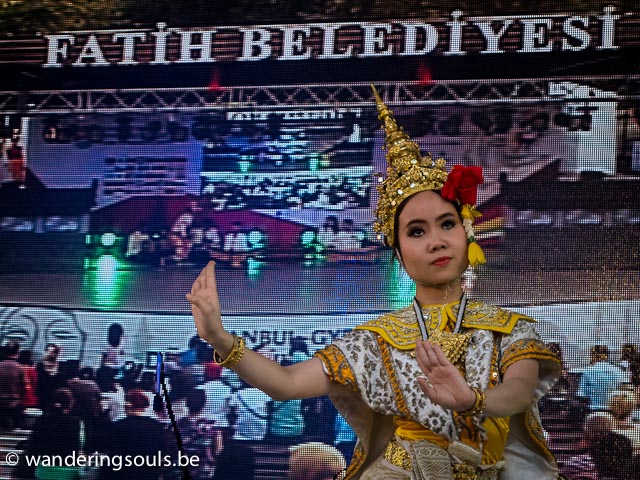 In the evening we took the night Hop-on Hop-off bus tour to get an impression of Istanbul by night. They had told us that the tour would take 3 hours so we paid the 20 Euros per person to be on the bus. The first hour we had some information about the sights we passed through our headset, but you have to know that we were stuck in traffic for most of the part, so you could have easily done it in less than 30 minutes. Then, all of a sudden, the bus stopped in a remote place where there was of course only one restaurant (and it was a very expensive one, even to European standards) and the driver told us that we had to get off the bus and we had to wait 1 hour before it would take off again! It was only because of the stunning view from the terrace of the restaurant that we decided to stay and have a drink, but I must admit that the view truly was amazing! After one hour and 40 minutes, the driver decided to move again and take us back to our starting point, so we were 1 hour and a half on the bus and most of this time we were just stuck in traffic. Would we pay this amount of money ever again to take this tour…NO WAY! It is a total rip off because on the way back we didn’t even get headphones for more information! Oh well, we are glad that we saw Istanbul by night but we could have easily done this on our own for not even half the money. Same for the guided tour, we didn’t get that much information and there weren’t even any funny stories, so we could have easily bought a book about Istanbul and read about all the sights ourselves… Truly a lesson for our next city trip! 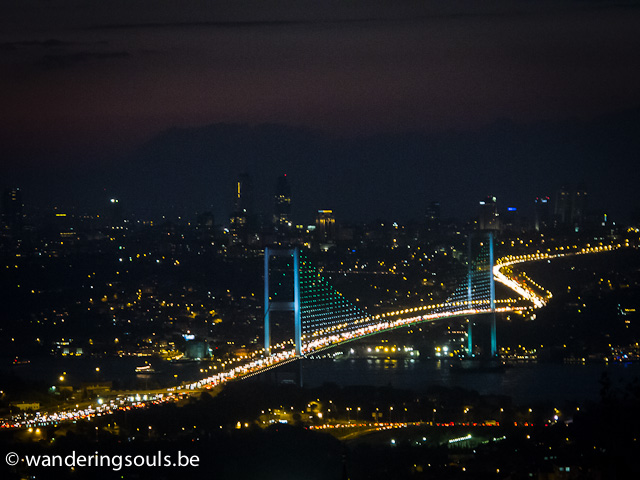 The next day we went on an adventure of our own in the city because trying not to get lost in a city as big as Istanbul truly is an adventure on its own! We went to the local bazaars and bought some Loukum to take home to our parents. They sell it in all kinds of different flavours and of course you can buy them very cheap or extremely expensive, depending on where you are and how they are made. We even went all out and had a bite to eat in a café where they only had drinks and desserts. The dessert menu was huge and they had so much to offer, going from Loukum over pudding to Baklava.

After all this excitement it is time to finally go home…. 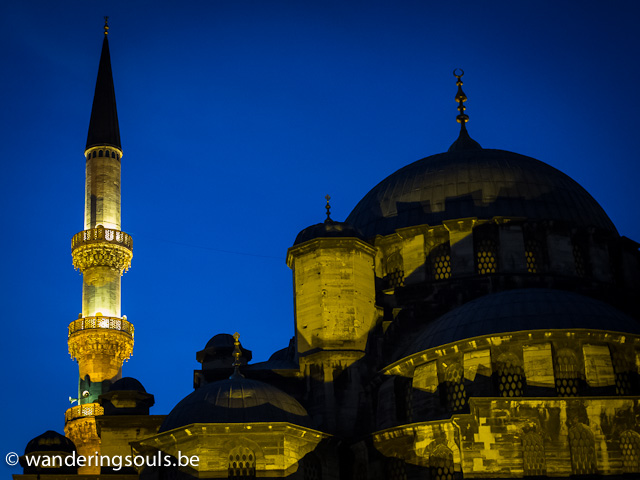