Home/Karakul to Bishkek
Previous Next

We are both amazed by Kyrgyzstan! It is such a beautiful country, I even think it is one of the most beautiful of this entire trip. There’s a lot of green and mountains with snowy tops and this all is topped of with amazing and cheap food. 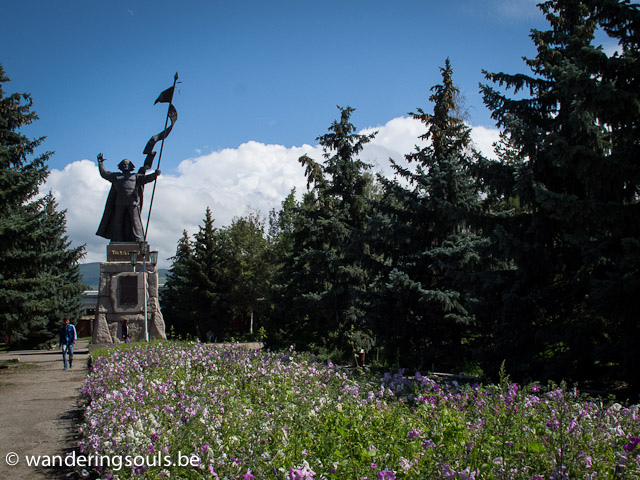 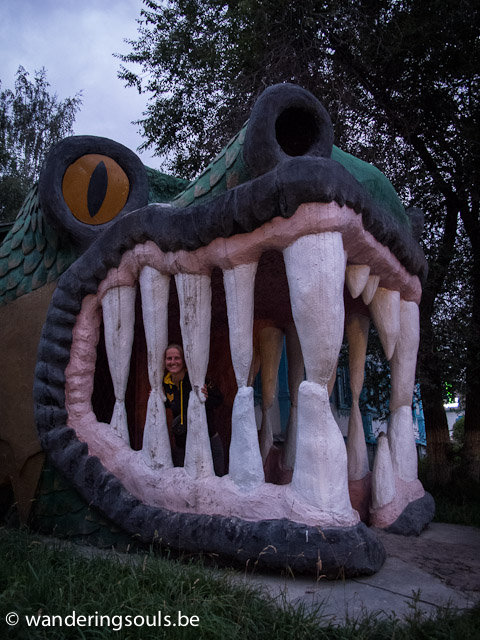 On the other hand, it was maybe the culinary highlights that made us stay there for a day or two longer! The bakeries were to die for and we found a cute restaurant with live music that served spectacular food. The live music was sometimes real Kyrgyz style, but sometimes it was even a cover of ‘Modern Talking’ so hey who could resist that! The houses in the city were funny to say the least. They stack a few containers on top of each other, put a roof over that and make it their house. They even use the containers to use as a fence around their homes so they have a lot more use for them here than just shipping things. 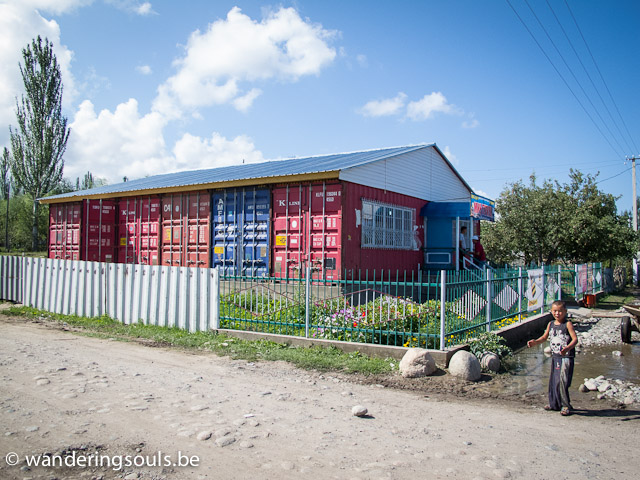 In Karakul we wanted to get some money out of the ATM because we only had what Seb had changed with the English guy in Kazakhstan, so we went to the first one, and the second one, and the third one, … and after that we still had no money, so we went inside the bank to test our luck. It turns out that they only have banks in Bishkek that take MasterCard, because all over Kyrgyzstan, they only accept Visa and since we don’t have a Visa we are screwed a bit. This meant that we had to calculate to the last penny to see if we could make it to Bishkek (which actually wasn’t planned).

After Karakul we drove all the way next to lake Yssyk Kul because we wanted to put up our tent next to it. In the morning we still found some secluded and tourist free beaches, but near the evening, it was all packed with tourist and there was only marshland, so no camping for us! 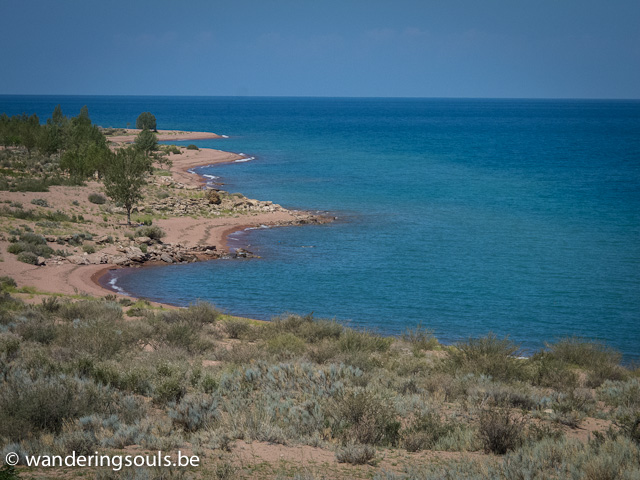 It is the first country since we started this trip that has signs that point to tourist attractions. This is already amazing, but the most amazing part is that they are in the Kyrgyz language and in English, so you even know what there is to see. Thanks to a sign like that, we saw two very beautiful spots along the way. The first one was the ‘Fairy tale canyon’. It was very hard to get to the end because the track was all made up out of loose deep sand, but it was worth our effort. We had a big Australia feeling while we were there, with the big red/brown rocks and the lake in the background. 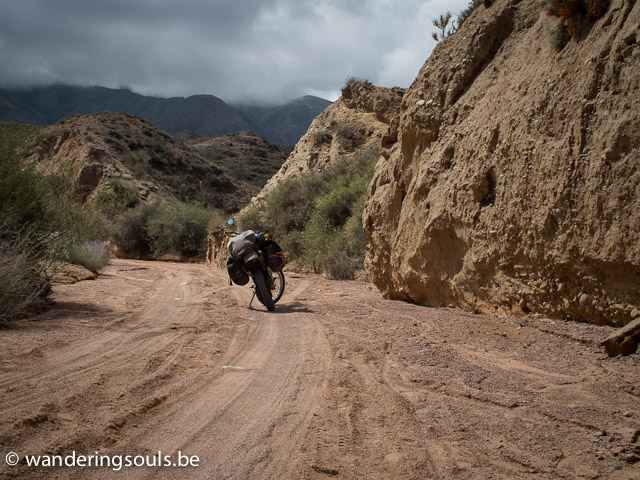 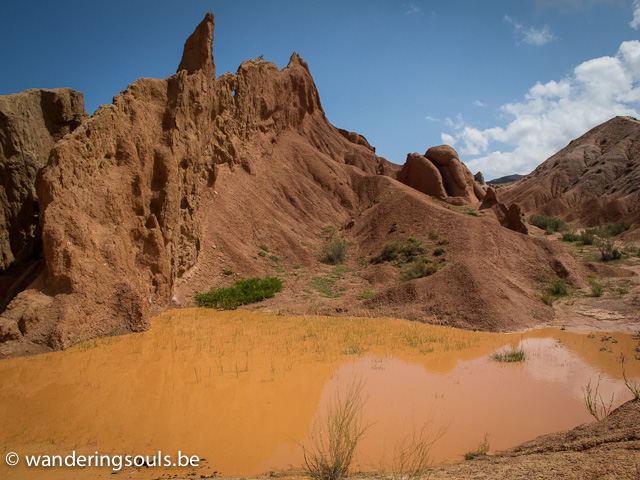 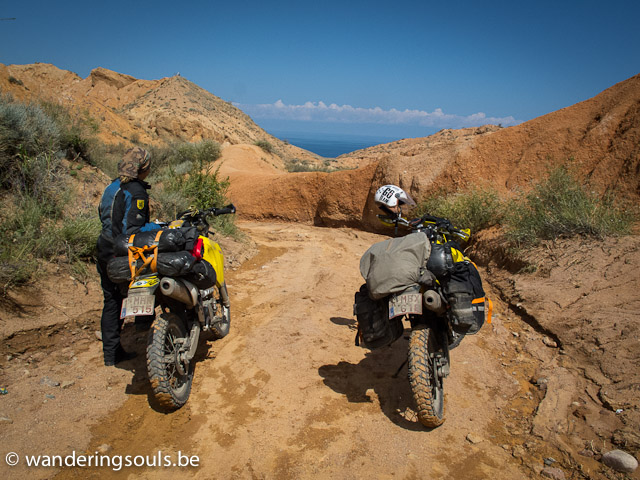 After this small detour, we found some other sign that said : ‘Salt Lake’. Well, we thought we knew what to expect (a dry salt lake) so we headed off to see it, even though we would have to do the same track back again, just like with the canyon, only this time it was almost 15 km’s one way. The track there was really nice, but the shit load of cars kept slowing us down and there was no way to pass them. 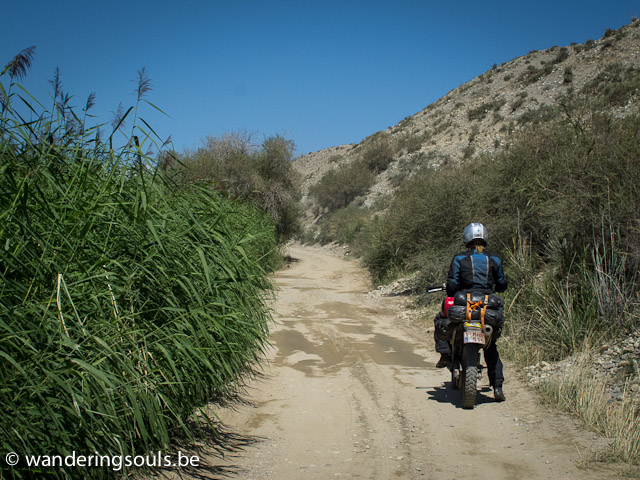 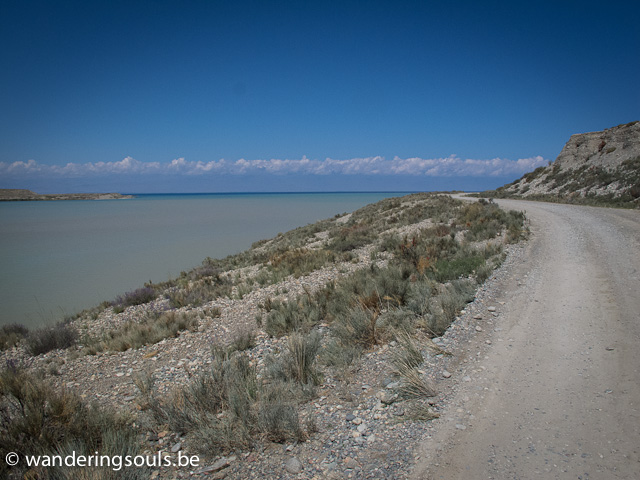 We saw that it had rained recently and we also saw that it would have been unthinkable to have done this track had it been raining, because it would have been one muddy track all the way (and not just a bit of mud, but at least 10 to 15 cm’s!). Near the end we got to a parking lot and a barrier with some guys that were asking for money. Well, we drove up to the barrier and asked how much it was, but of course because we didn’t have any money thanks to the stupid banks here, we told them that we couldn’t pay them. In Belgium they guard would say : “too bad, no money, no salt lake”. Here they just opened the barrier and let us pass… How cool is that! What we saw after the barrier was nothing like what we expected to see. It looked like Benidorm but the Kyrgyzstan version. The lake was a real ‘wet’ lake with salt and there were A LOT of local tourists, taking mud baths, swimming in the lake and sun bathing! 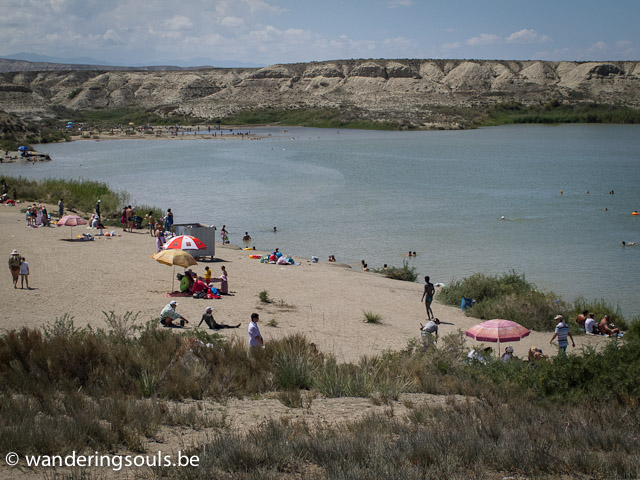 Not really what we had in mind, but nice to have seen anyway and Seb had his second off road bit for the day so he was happy. 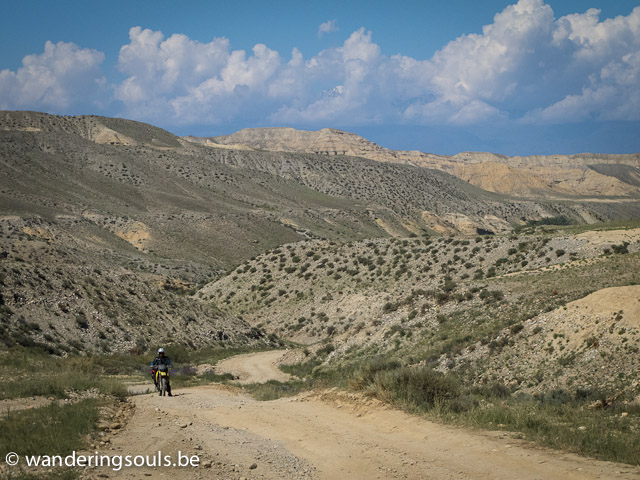 On the way back to the main road we took a spectacular picture of the bikes with the Ysyk Kul lake in the background and if you look carefully, you can also see the snowy tip of the mountains in the background! 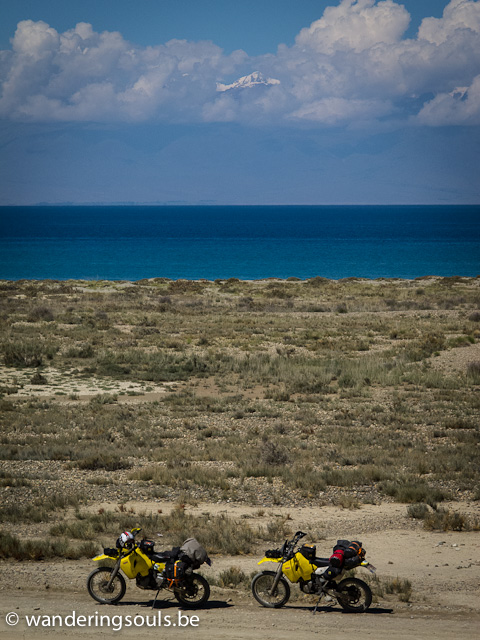 In some places the mud was still there, but at least it was manageable since it was dry and sunny. 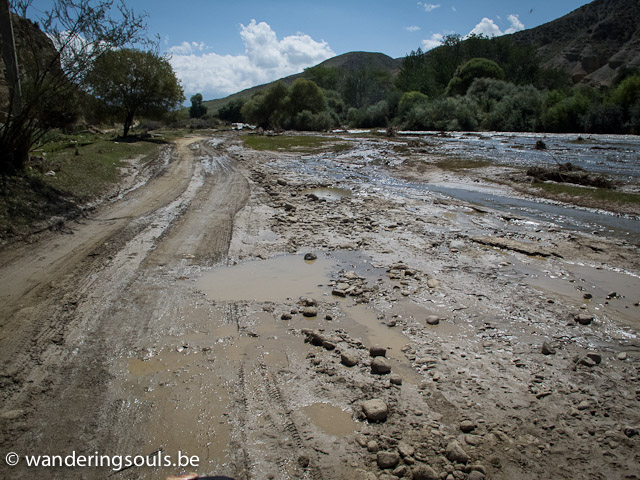 Near the end of the lake we saw that we wouldn’t find a nice place to camp anymore, so we decided to push on to Bishkek and stop there. After the lake, it was almost all highway but not boring at all. We were constantly driving through the mountains and if it wasn’t that, then a local farmer would keep us busy. He just got on the highway (imagine the cars are driving around 100 km/h) with his sheep and horses and just blocked the road… It made for a hilarious picture! 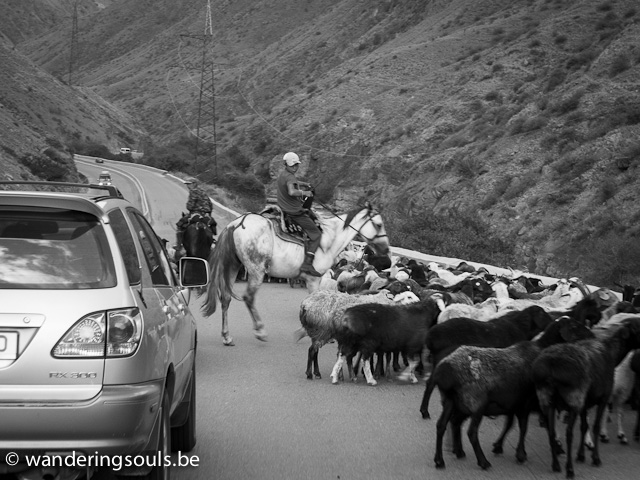 Near Bishkek, we drove a while right next to the Kazakh border where there was only some barbed wire and a bored looking military guy that just looked at us when we stopped to take the picture. 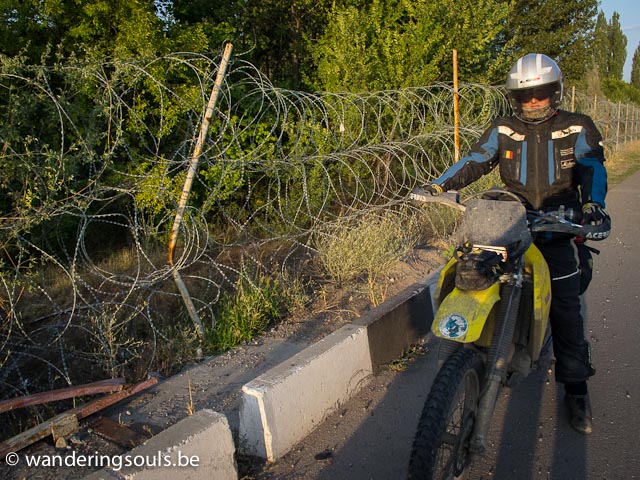 Just before sunset we finally reached Bishkek and we are both out of our dilemma : are the Mongol drivers worse than the Kyrgyz ones or not?! Kyrgyzstan is now our number one when it comes to bad driving skills. They drive on the lane for oncoming traffic and expect the oncoming traffic to go out of their way when they flash their lights. They drive behind you, honk their horn and expect you to drive in the ditch so they can pass. They pass you so close that you have to pull in your elbow at time or it will hit their mirror. In the city they will honk at you to go even though it is still red because that is just the way they do it. Everybody stops even when the green light is only blinking (so it is not orange yet), but on the other hand, everybody goes when it is still red on the other side also…strange country! Seb was of course expecting that pedestrians have the right of way, but I think that stupid law only counts in Belgium, because here they do not even try to stop, they just hit you if you don’t jump out of their way.

In the morning we found out where the bank was that would take MasterCard (thanks for the help Penny and Igor, you saved our butt!!) and we had to take a picture of the fact that Seb could finally get some money out of the ATM (we tried the evening before at a few ATM’s, but still no luck). It turns out that there really is only ONE bank in the whole country that has an ATM that will give money if you have MasterCard and it is only in Bishkek, so now we know why you should always take Visa also! 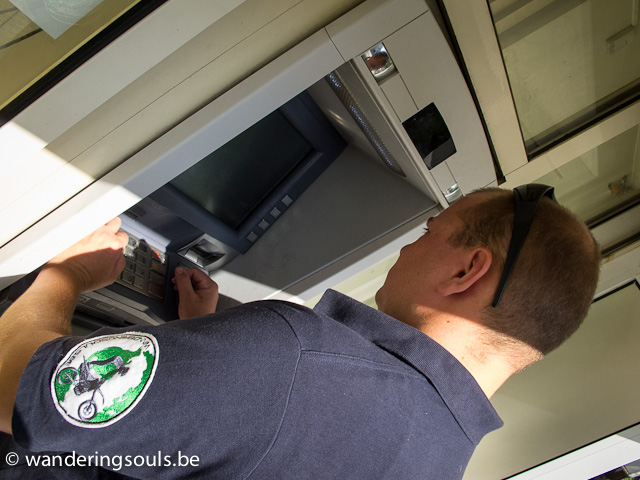 Bishkek is amazing, green, clean and has a very young vibe and a lot of terraces and great bars and restaurants. The local fountains are being used as swimming pools for the kids and we used it to cool our feet. All the parks are well maintained and have a lot of beautiful flowers in them. There even is a huge flag that gets pulled down each night and is being guarded all day long. We were just there to see the changing of the guards. 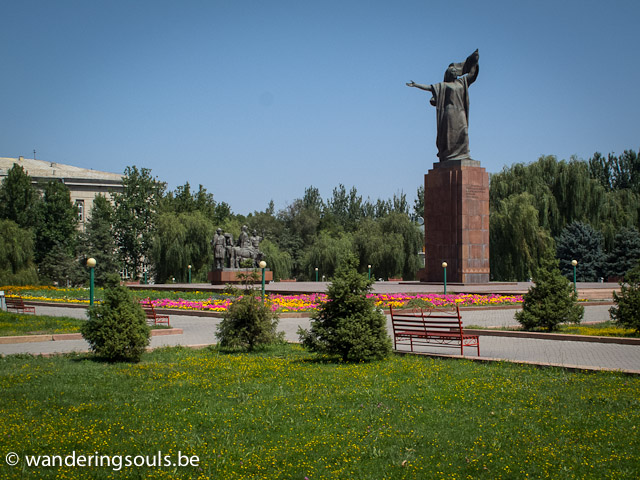 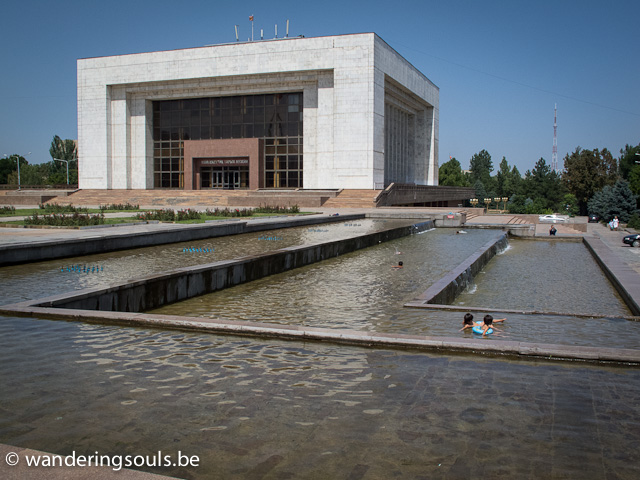 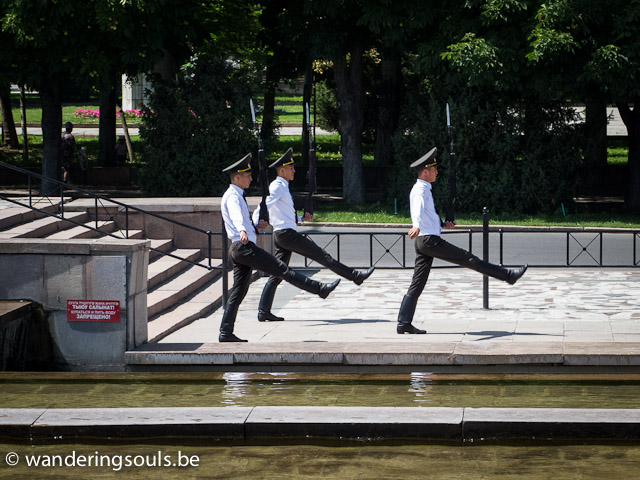 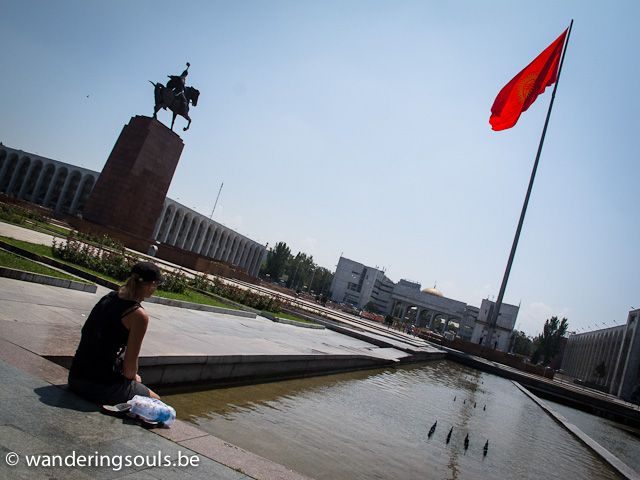 We went to a local North Face shop to get some new driving boots for Seb because his old once had just give up the battle! The sole was full of holes and you could see his toes, so waterproof was now really out of the question. On the way back to the hostel we stopped at a local terrace to get a drink and after we had already gotten back to the hostel, Seb noticed that he had forgotten his new shoes there… I told him that he didn’t have to give me something to write about… Luckily the shoes were still there so starting tomorrow he will have shiny new footwear! 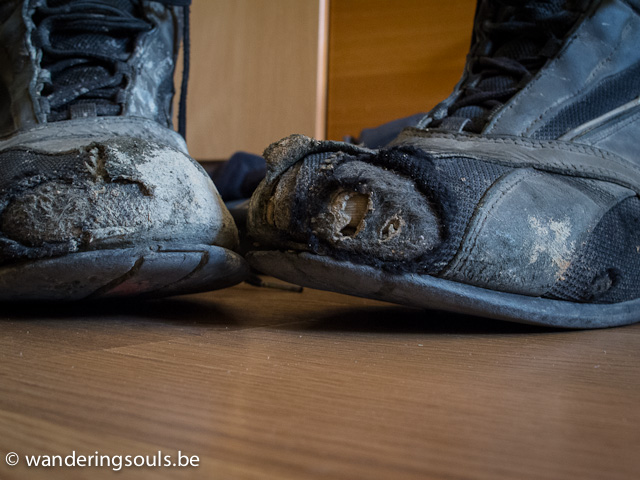