Home/Samarkand to Osh
Previous Next

We stayed one more day in Samarkand, so we could visit all the sights at night and boy was it worth it! The Rigistan is very beautiful at night and there are less policemen, so we could get a bit closer without paying this time. 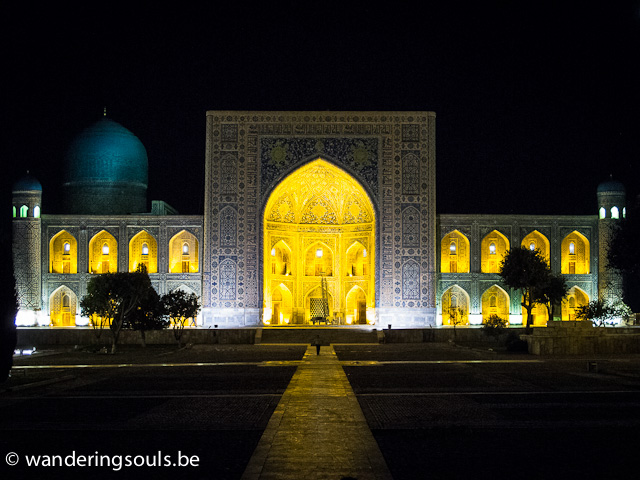 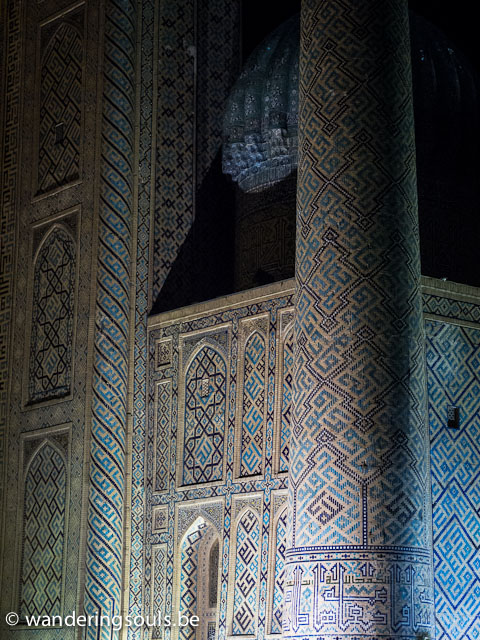 One thing that struck us as unique were the fountains here in Uzbekistan. They are all lit up with very colorful lights in the evening and all of them have music that is playing in the evening. Sometimes it is very classical music, but at other times it has a more up-beat tempo and you have the impression that the fountain is set to interact with the music… What also struck us was the fact that during the day there would be almost nobody in the streets, but at night when the sun was gone, everybody would gather around the fountains or the local monuments and chat and take pictures. Probably the heat has something to do with this. We also enjoyed lingering at the sights longer in the evening than in the daytime. 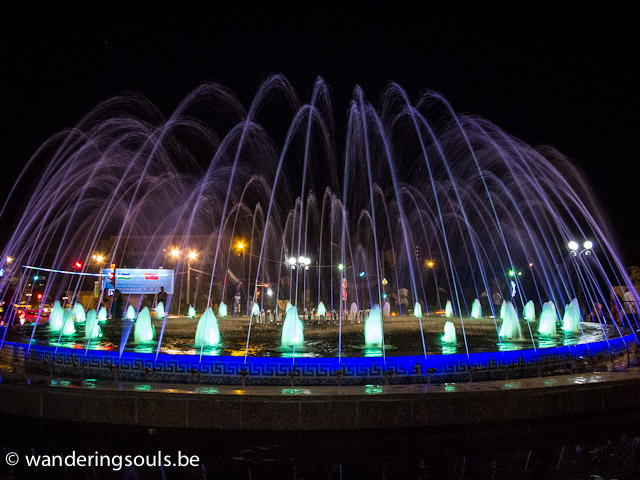 We were walking along one of the many beautifully maintained walkways in Samarkand when an ice cream shop attracted our attention… Well we couldn’t just leave the country without having tasted the local ice cream, could we? So, in we went and they asked us what we would like to order. We were thinking about a small ice cream just to have a taste when we saw someone walking away with this huge bowl of ice cream and we just said : “we want one of those!” Well, it looked impressive, it tasted like chemical sweetness, it gave me brain freeze, but in the end we were glad we had one! Just the look of it makes me want to have one again… 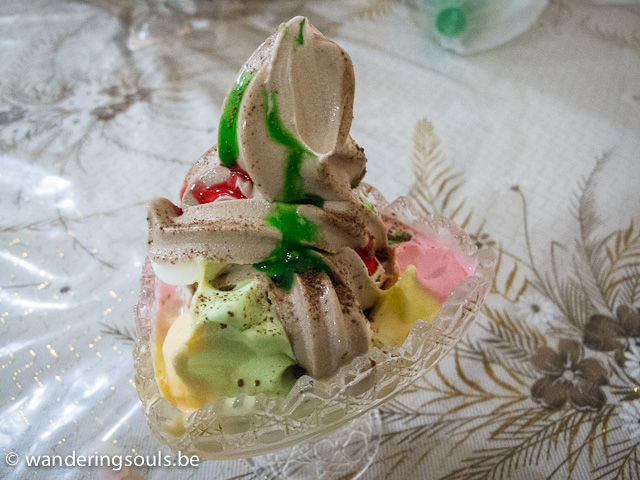 We went to one of the local bazaars where they sell everything going from fruit to vegetables, to clothing and pots and plants for your garden. There is one thing that you can not describe and that is the smell. The smell of fresh vegetables or fruit combined with the smell of nuts and spices just makes you want to stay there forever and take it all in. 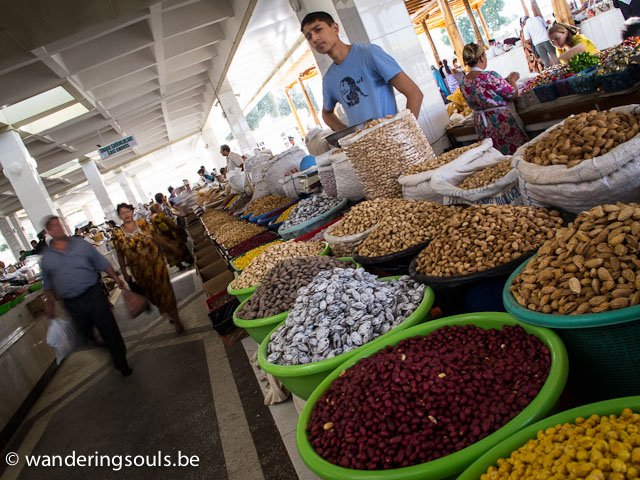 The next day we took the train to Toshkent and we were very lucky because we had a seat with extra leg space so we were very comfortable during the entire trip. Once back in Toshkent, we went to the hotel that we saw on Booking where we wanted to stay for the night. This was a two hour walk, but we enjoyed the scenery and did some window shopping seeing as it was a Sunday and all the shops were closed. At the hotel they told us that the price for a room was 180$, so we kindly told them where they could stick their room and went out again to go to a restaurant where they would have internet so we could book the same room for 90$. I think the God’s were against us this time, because all the restaurants we passed were closed on Sunday, so we decided to stop trying, and just head back to the train station to get a taxi to the border. We took the metro, which was the last means of public transportation we hadn’t taken in Uzbekistan. There is one thing I can say about the public transport here in Uzbekistan and that is that all of it is cheap, fast, punctual and convenient and Belgium could take some notes here because at home public transport sucks big time! 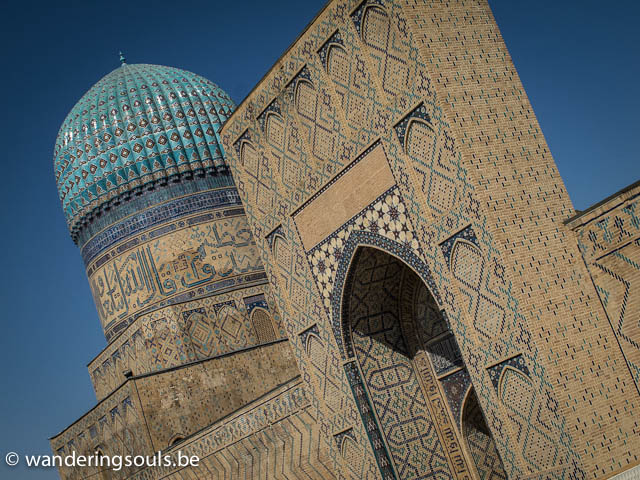 At the train station there was a taxi driver that wanted to take us to the border and by that time it was just 5 o’clock so we would be at the border around 11 or so… Well on the way we stopped to have some food, we stopped two times to get some gas, we stopped at the drivers house to pick up his wife and daughter, who drove with us to the border, so in the end it was past midnight when we got to the checkpoint that was about 10km’s before the border. Here the discussion started between our driver and the police. The police had our passports and the taxi driver turned the car around and put it at the side of the road a few meters further… We were wondering what was wrong since Seb had read on the internet that the border between Uzbekistan and Kyrgyzstan was open 24 hours. This actually turned out to be false information because the border was only open from 7 until 7 in the evening and they would not let us pass. Since we had calculated to the last Uzbek Sum what we had to give to the taxi driver, we didn’t have any money left to even try to get a hotel for the night, so we told the police guy that it was no problem, we would just sit outside, next to the border control booth and wait until 7 o’clock! I started shivering very hard to get some pity from the border guys (and I didn’t have a sweater with me so I really was getting a bit cold) and I sat down next to the drug sniffing dog on the street. One of the guys really did feel sorry for us, so he took us to the restaurant that was right next to the control booth and said we could sleep on the floor in the restaurant. You have to know that the restaurant was already closed at that time and the policeman just shouted through the door to the owner that we were staying next door if he wanted us to or not! He even ‘stole’ some food from the kitchen to give to us and some hot tea. At one point he came in and tried to explain something to us waving with a stack of money. We thought that he wanted money, so we asked how much he wanted, but then he said that he didn’t want money but that we had to be careful with our money because he didn’t trust the army guards that were at the border with him and he told us to put our money far away! Well for once we listened to this guy and put the few dollars we still had left in my back pocket of my pants and boy were we lucky. In the middle of the night one of the army guards came into the room, very quietly (Seb told me in the morning, because I was sound asleep) and he snuck up to us and felt around in the dark to try and see if there was anything valuable that he could take!! Sneaky bastard! Seb had one eye open and was waiting for this guy to make one wrong move so he could punch him in the face, but when the guy saw that there was nothing he could get his hands on, he left. I slept with our towels over my body to try and keep warm, but Seb had nothing left so he had to endure the cold all night long (he was so sweet because he gave his towel to me!) In the morning, we left very early to go to the border and just before we wanted to enter Seb said: “honey, did you know we took our silk sleeping bags with us….” Oh well, at least we saved 180$ and had a great experience on how friendly government officials can be! 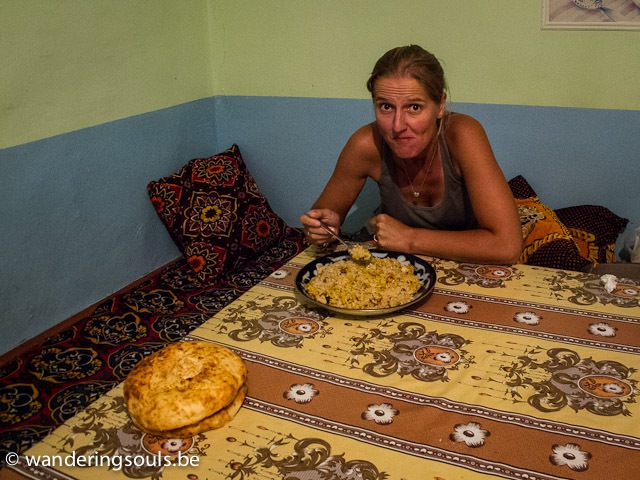 The border crossing went very fast, especially in Kyrgyzstan so we were out of the border area in no time and off we went, back ‘home’ to Osh to our favourite hotel with swimming pool!

Back in Osh we wanted to change some dollars to Kyrgyz Sum, so we took 6 bills of 20$ and went to the money changing office. There they told us that they only took 50 or 100$ bills and that they would not change it for us… Huh, so you can only get 50 and 100$ bills out of the ATM and you can only change the same bills, what do they do with all the rest of the dollars then? Oh well, they also told us that the local dealers at the bazaar would probably be willing to change it, so we tried our luck there, or at least we wanted to try our luck because it was a Monday and the bazaar is closed on Monday! Money seems to be a big problem for us on this last stretch of our trip, because we are never able to find any and if we have some, nobody is willing to change it!

On the 12th we are taking the plane to Istanbul and in the meantime we will stay here in Osh and try to relax a bit. 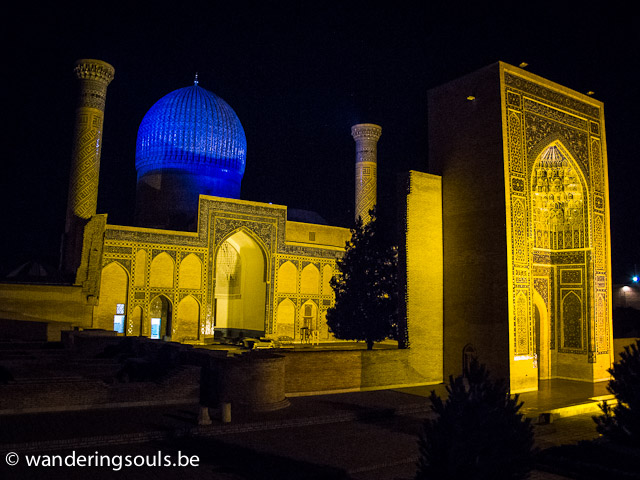