People who know us, also know that we have owned almost as much houses and cars in our lives as some women own shoes…  Seb is the car fanatic and I am the house nut and it’s just because we appreciate their beauty and design and also a bit because we get bored with the one we have and move on to the next one. This is why some people tell us that we have the attention span of a gnat and I think they might be right (wait, what was I talking about again…. 😉 ).

Something that has become more and more important in Belgium concerning housing is the energy level of the house (in Dutch : EPC) which makes sure that your house doesn’t “loose” energy anywhere. This is a good thing because your energy bills go down and you leave behind smaller ecological footprint on this planet that is already slowly dying because of overpopulation. Since I am such a house lover, I always go window shopping at real estate places, just to have a look at how people live in foreign countries and to see how expensive housing is. The thing that struck me first here in the North-West of France is that houses are not that expensive compared to Belgium, but the thing that confused me was that nobody seems to care about the energy level of their houses. Your EPC can go from A (“very well done mister and misses, your house is isolated as it should be, so no cold nights for you!”) to G (“are you kidding me!! How can you live in this cold dump?!”) Well, let me tell you that the average score I saw for about 100 houses was F and this blew my mind! Ok, I have to admit that the older, non renovated houses in Belgium are also bad, but the newly built ones are usually no worse than B. Here in France (or at least the part I’ve seen so far) even the houses that have been built in 2010 had a score of D or E. It gave the impression that the French just don’t care at all!

After almost loosing all hope for the French completely, there was one guy who restored our faith, his name was Julien. We had just parked Peanut somewhere in a forest near a small local road when Julien came to the van and told us that he had just checked out our site and that he loved what we were doing. After talking to him for a while, he told us that he was building an ecological house out of straw and this spiked our interest immediately. We went to look at his house and it was amazing! He has been building the house himself and has already been busy for 2 years and he expects it to take at least 1 year more to make it liveable. The outside of the house was wood and the insulation for the house is the straw and some type of mud, which hyper isolate your house. Even the floor of the house is ecologically friendly. You could see that Julien was passionate about the house he was building for his family and you could also see that this passion translated itself in building a sustainable house instead of just a cold cooky cutter concrete block. I am sure that his EPC will be more in the line of an A or a B so he and his family can enjoy the house for many years to come. The score is not just a number, but it translates itself in how much you care about your family and the environment. 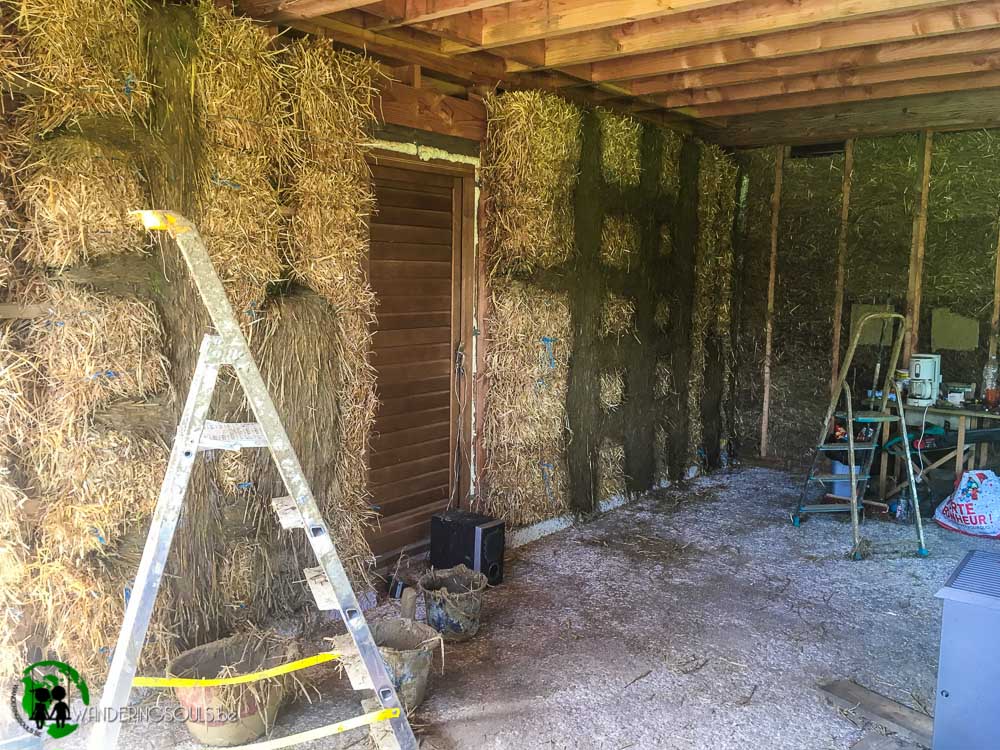 Seb and I we both are intrigued by people who build their own homes and we would like to think that we also want to do this in the future, but then the ‘gnat’ thing happens again and our minds wander off again, in search for new horizons and new adventures…