Some time passed since the last update but there’s a reason for that: Kim is still not ok and in the meantime started antibiotics in the hope that this will help her to get better and so I continued alone the trip, as I really did not ant to miss the highlight of this trip… the Pamir!

I left Osh in the afternoon to go to Sary-Tash the last village in Kyrgyzstan before the Tajik border. The road to Sary-Tash is rather uneventful, but the last part is again beautiful with mountains and the occasional land slides makes the ride a little less boring: 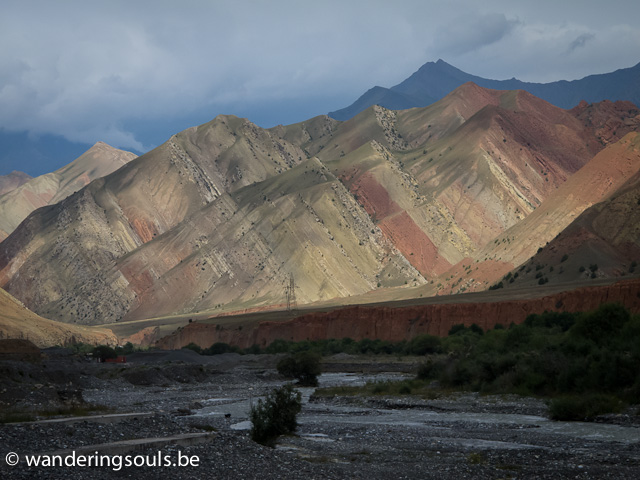 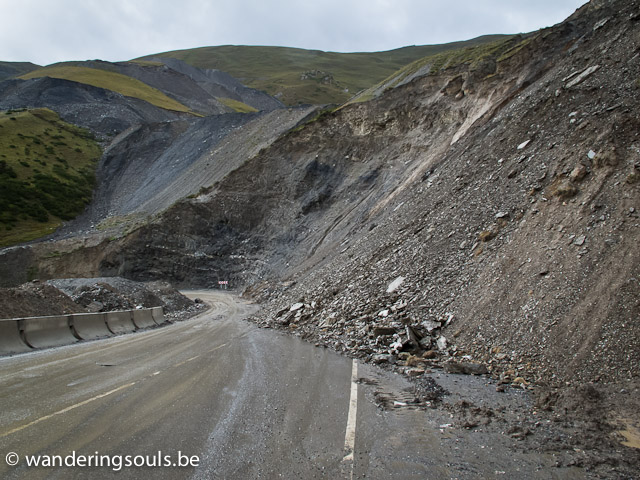 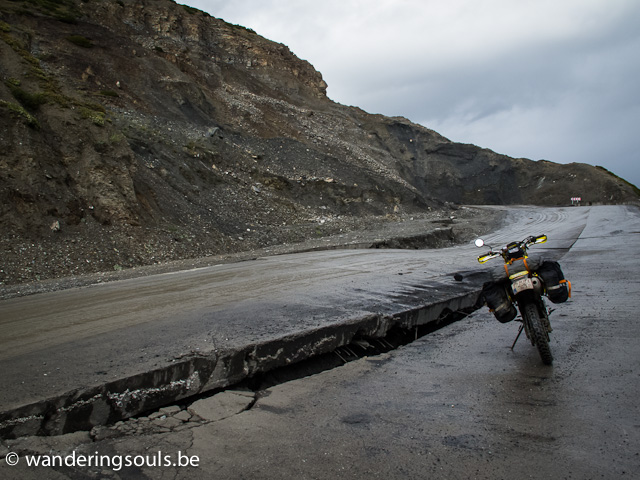 In Sary-Tash I stayed in a homestay with a family and Tatiana is milking the family cow for some fresh milk. I didn’t get any though… 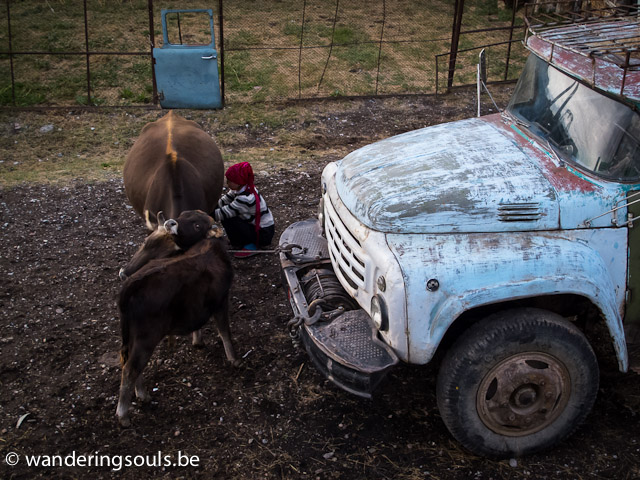 Next morning I left for the Kyrgyz border: 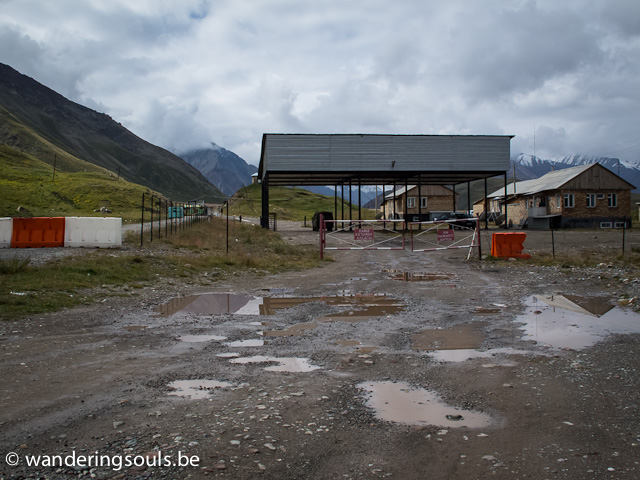 Formalities were quick and easy (to my Russian friends: you can learn from this!) and after 10 minutes I started on the 20km of no-man’s land between the two border checkpoints. The weather was not optimal but one can not complain, at least it wasn’t snowing. The actual border between KGZ and TJ is at an altitude of 4280m. 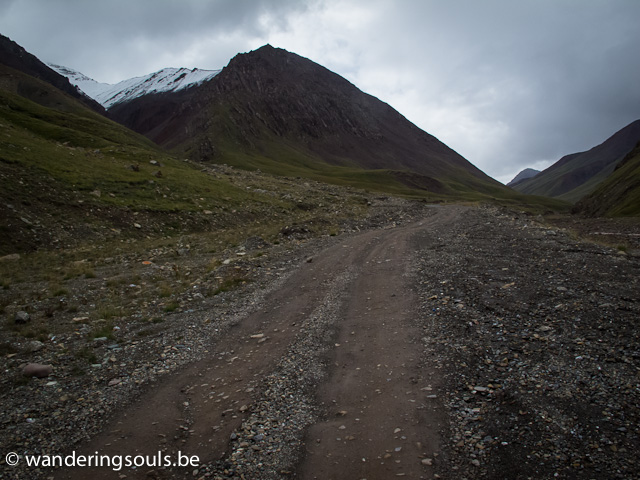 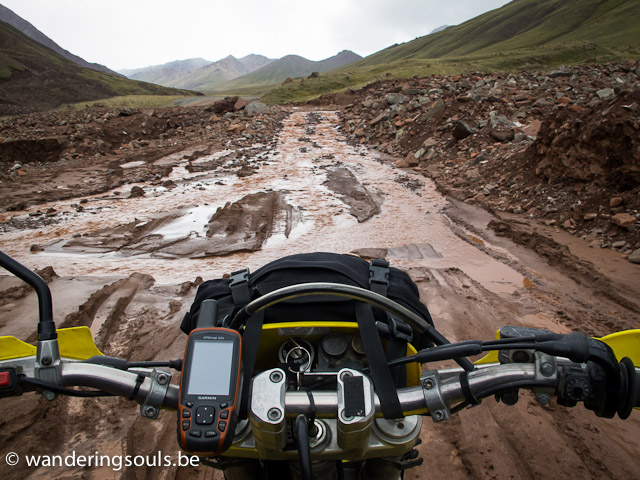 The Tajik border was even more crappy than the Kyrgyz, but all went smoothly and after paying 10$ for a ten day import of the bike I was in Tajikistan. 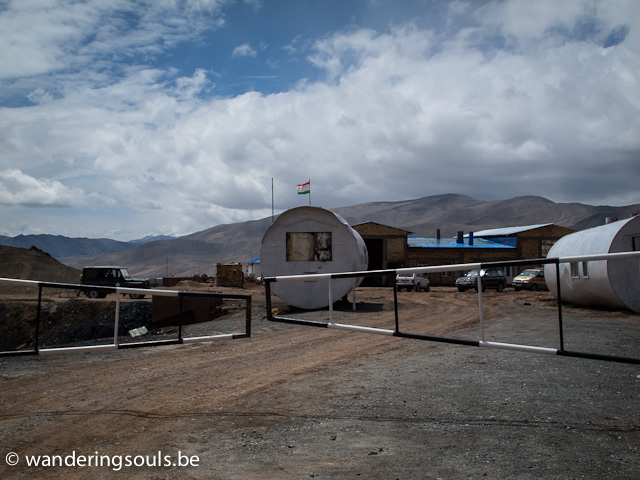 The place where I looked forward to the most since we left Belgium now more than 3 months ago! After a while I noticed that there was a huge (and I mean really, really long) fence with barbed wire all along the road and scenery to my left. I learned that this is actually the Chinese border (even if on the map it’s a few km away) and it is completely “protected” with this fence: 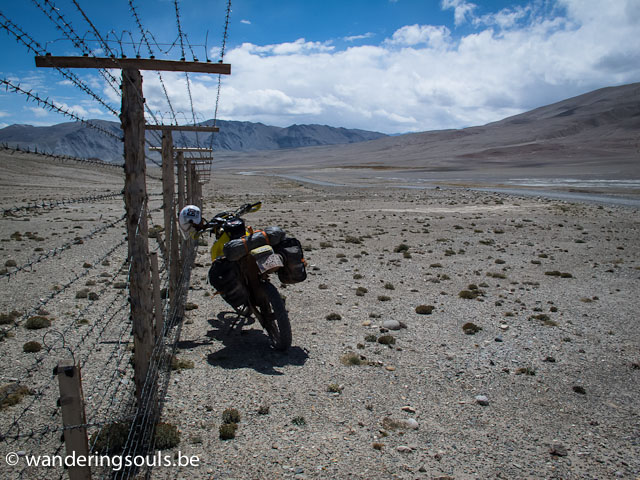 So, a barbed fence just screams to get neglected, so after looking left and right I just went for it… Yes I was illegally in China! Never mind the gap in the fence now… I know nothing about it. Seriously. 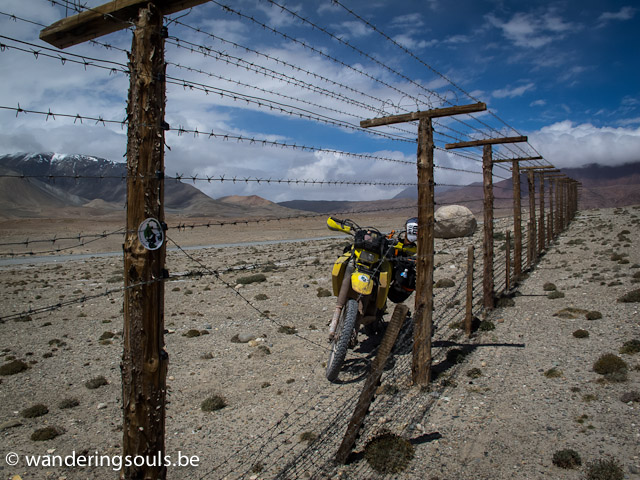 Anyway, I filmed the whole thing, to have proof, so I could ‘officially’ take some sand and label it “China”. (we collect sand from all over the world to take home)

I continued the trip on the Pamir Highway, which had really nothing to do with a highway, but since it’s the only paved road it more or less deserves the name highway. It was built in the ‘30’s by the Russian Military and cuts a across the Pamir Mountains, also called ‘roof of the world’ and for good reason I would find out the next days. The scenery was stunning and now I understand why I wanted to see this so much; it is just one of the greatest things one can see, feel and experience. To ride to 4655m just gives you this strange feeling, certainly as it is the second highest road in the world. I’ve always been a big fan of mountains and water/lakes/sea, so I was completely in my element here! On the Pamir Highway I counted exactly one car and two trucks in a day… and it’s the only road going from Osh to Khorog. 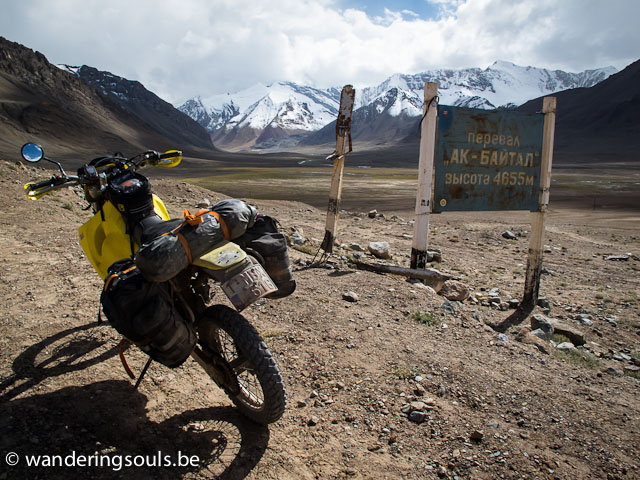 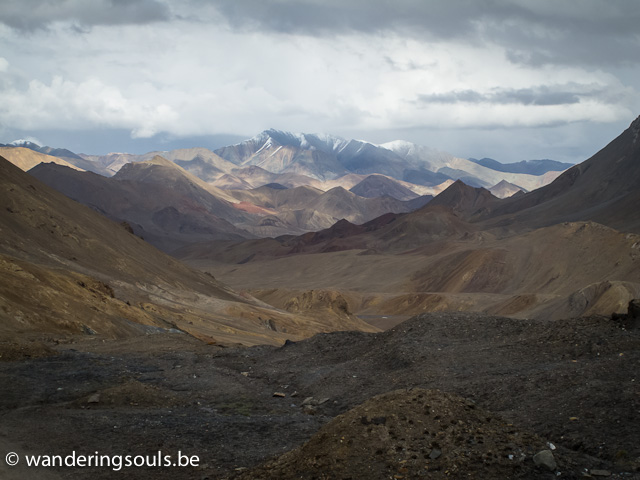 Even with the high altitude and lack of oxygen I was enjoying myself and sucking in all the scenery, cold air, humidity and lack of any other human. I arrived in Murghab, the ‘capital’ of Eastern Gorno Badakhshan. If now you expected a city with all that comes with it, sorry to disappoint you, it looks like this: 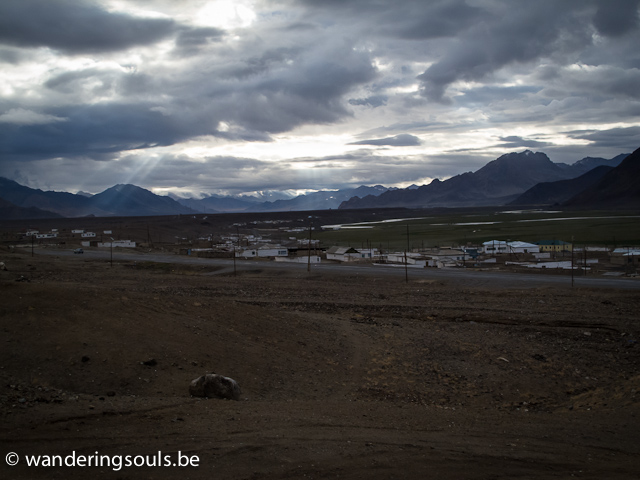 And the only place where I could find fuel was with this guy, where you pay per more or less 5l… 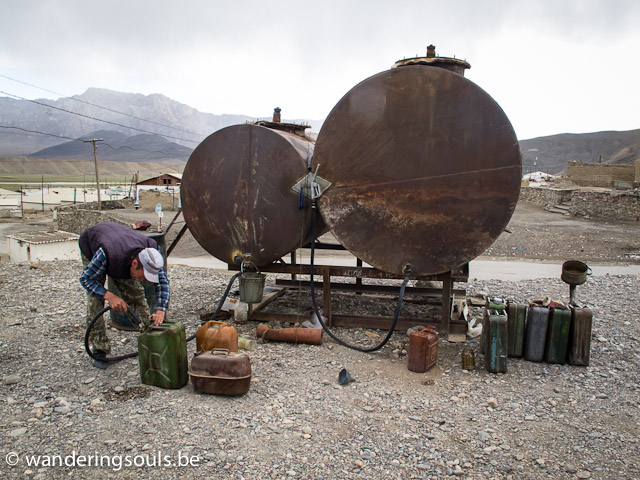 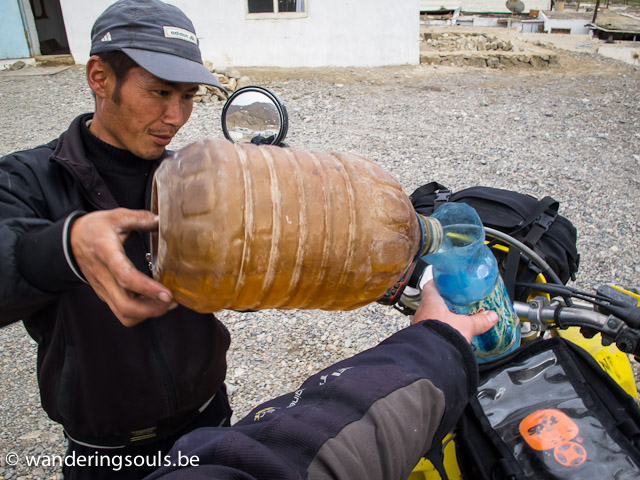 Continued next day and found this really interesting gorge/valley. Took me some time to make it in time for the 30s delay on the camera, but I think it was more than worth the effort… 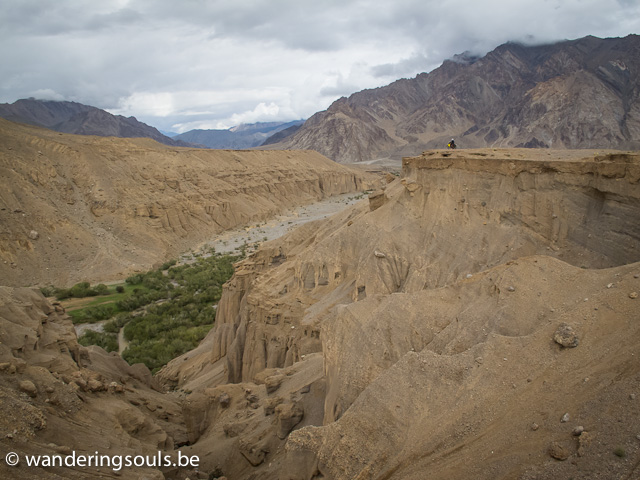 Arrived in Alichur, where I knew there would be a track going to a lake, so off I went on this beautiful track where you ride for hours without seeing anyone. 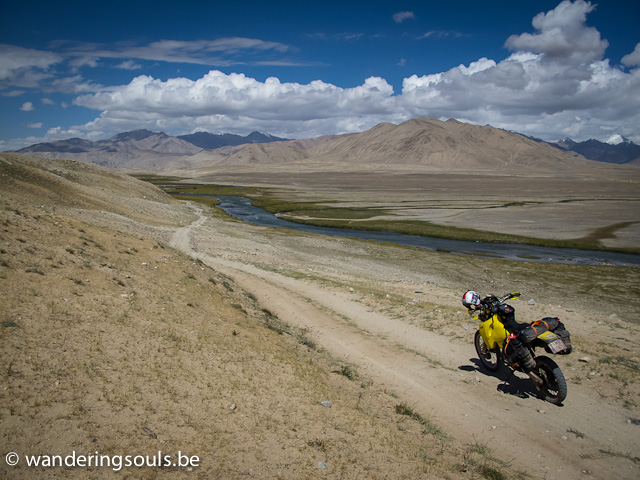 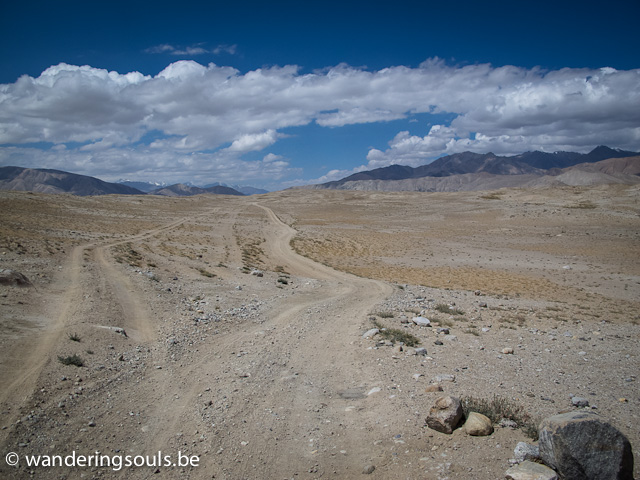 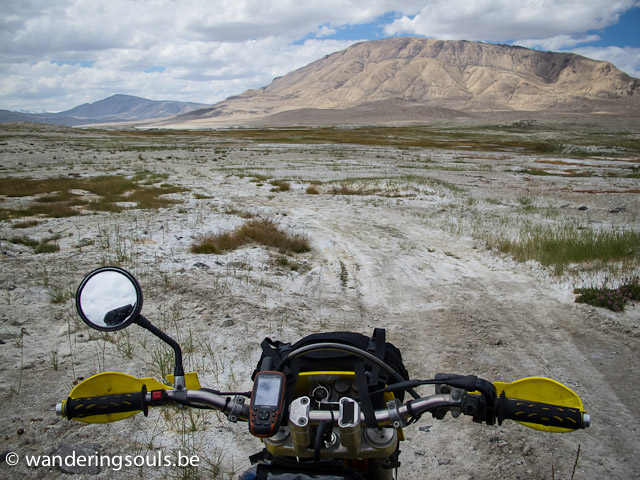 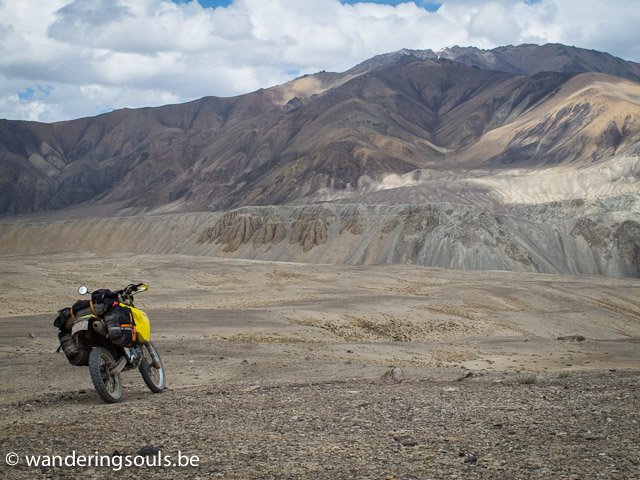 I made it to the lake and it was well worth the detour, the lake was nice and the track was even better! 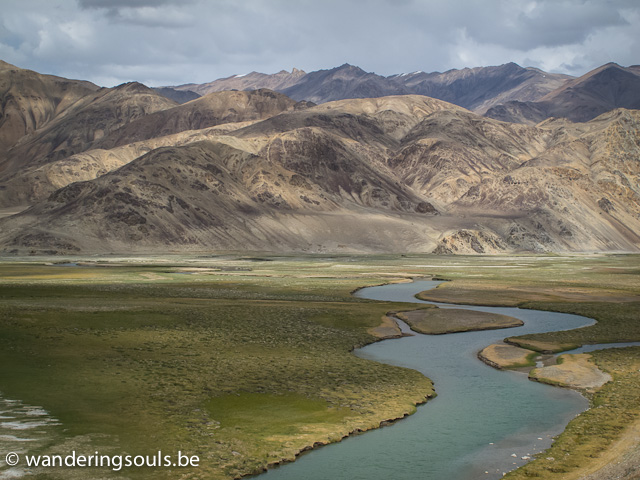 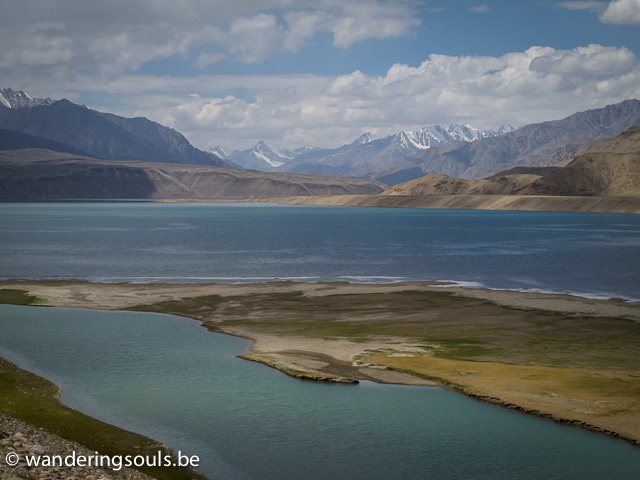 After the lake I went south and the track was yet again great, always staying above 3000m altitude with nice gravel roads. 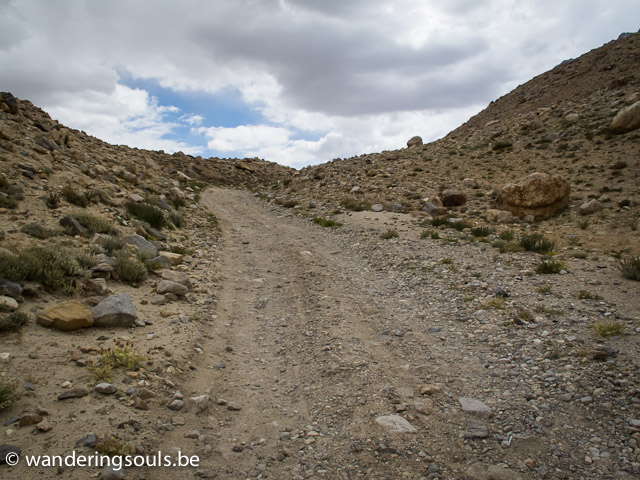 I easily made it to the Wakhan Valley, the part where Tajikistan has it’s border with Afghanistan. This is the part where I was really looking forward to ride for the last months, so I was more than happy to be there. Yet another military checkpoint and then there was only Afghanistan left to see on the other side of the river… 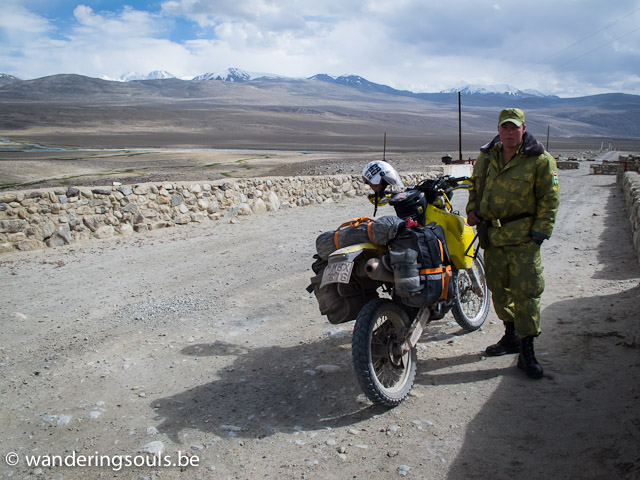