When we left our hotel, we saw a huge crowd standing on top of a bridge somewhere in Costa Rica and we also saw a lot of gift shops, so this made us think that maybe there was something to see… We parked the bikes and had a very helpful ‘security guard’ tell us that he would keep an eye on the bikes, so we left everything on there and off we went towards the bridge.

When we were halfway on the bridge, we could see what all the fuss was about: crocodiles! 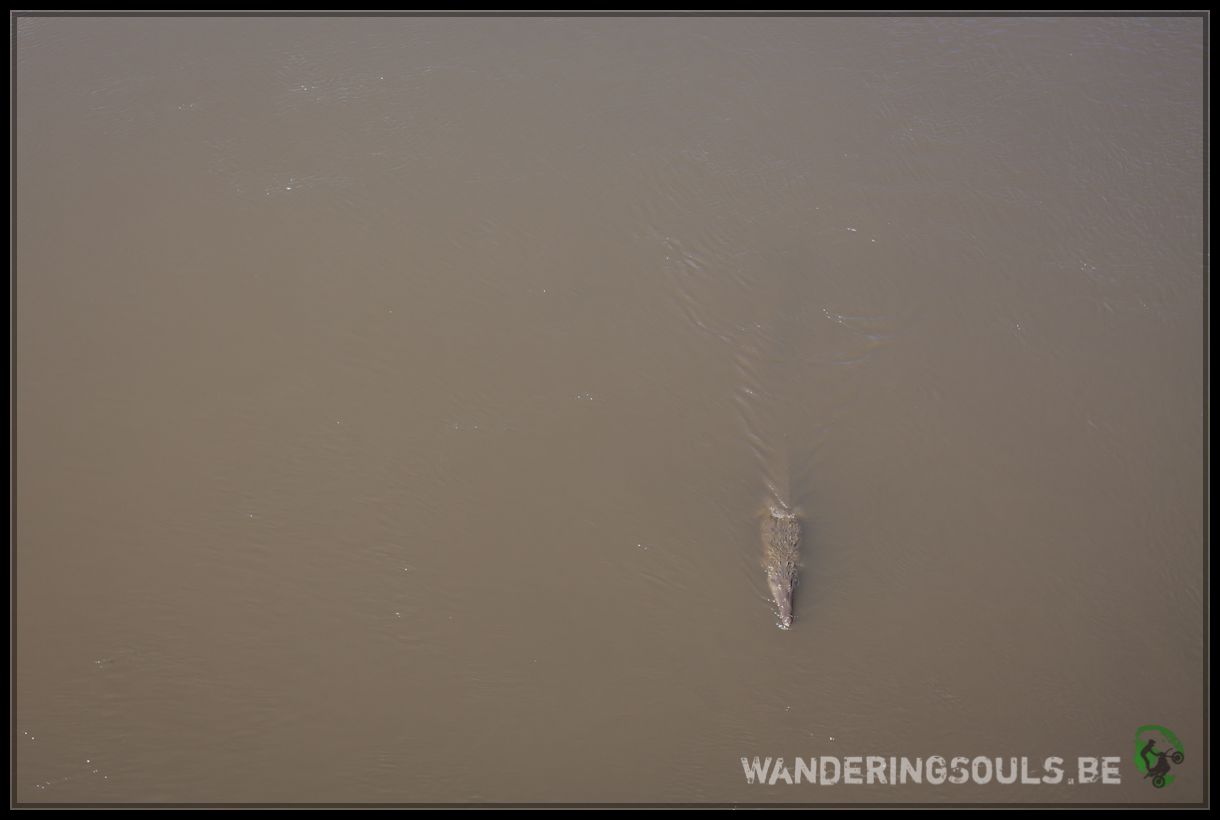 It turned out that this river was a natural breeding place for these beauties and they were all there, relaxing and soaking up the sun. I don’t think it was a good place for a swim unless you want to be crocodile kibble. 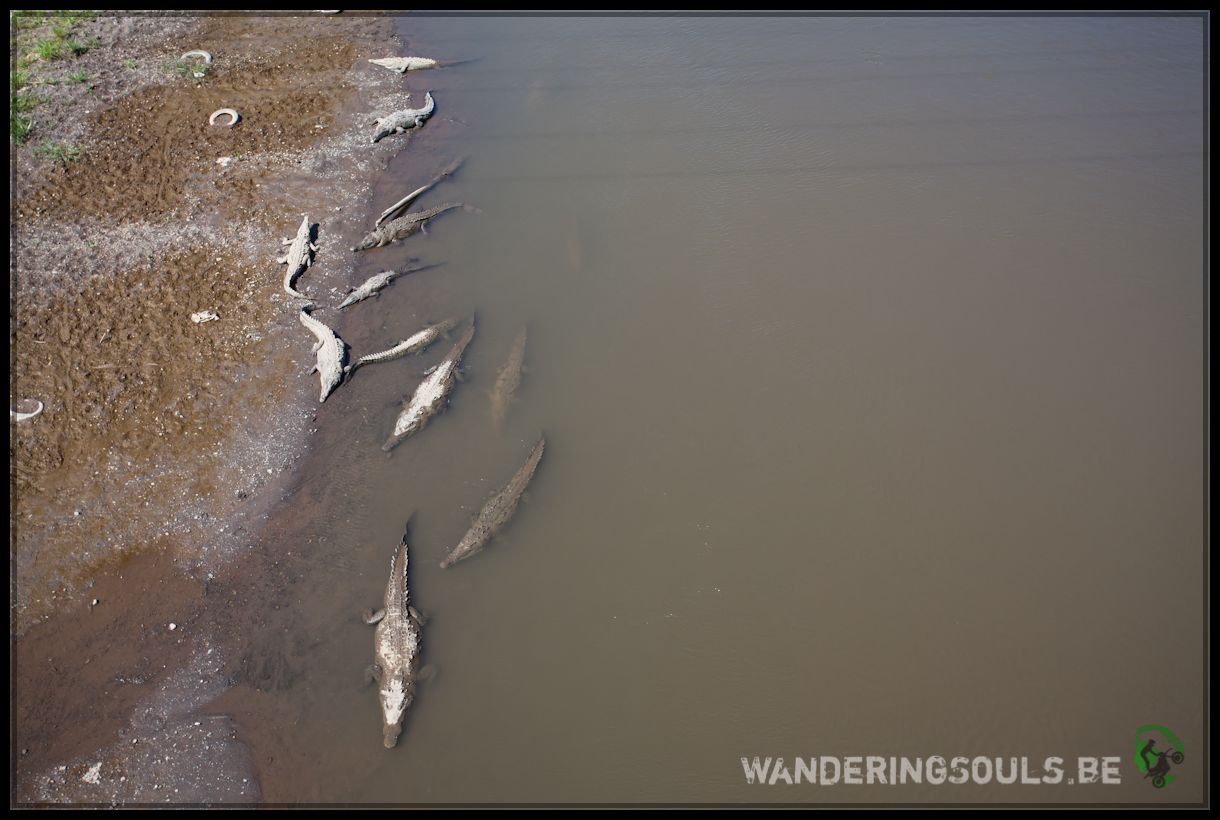 We still didn’t have a fridge magnet of Costa Rica, so we went to the local gift shops around the river and saw a very nice one that we wanted to buy, until they told us that it cost 8 dollars!! I think that is the highest price that anyone has ever put on a fridge magnet, so we passed and just went on. 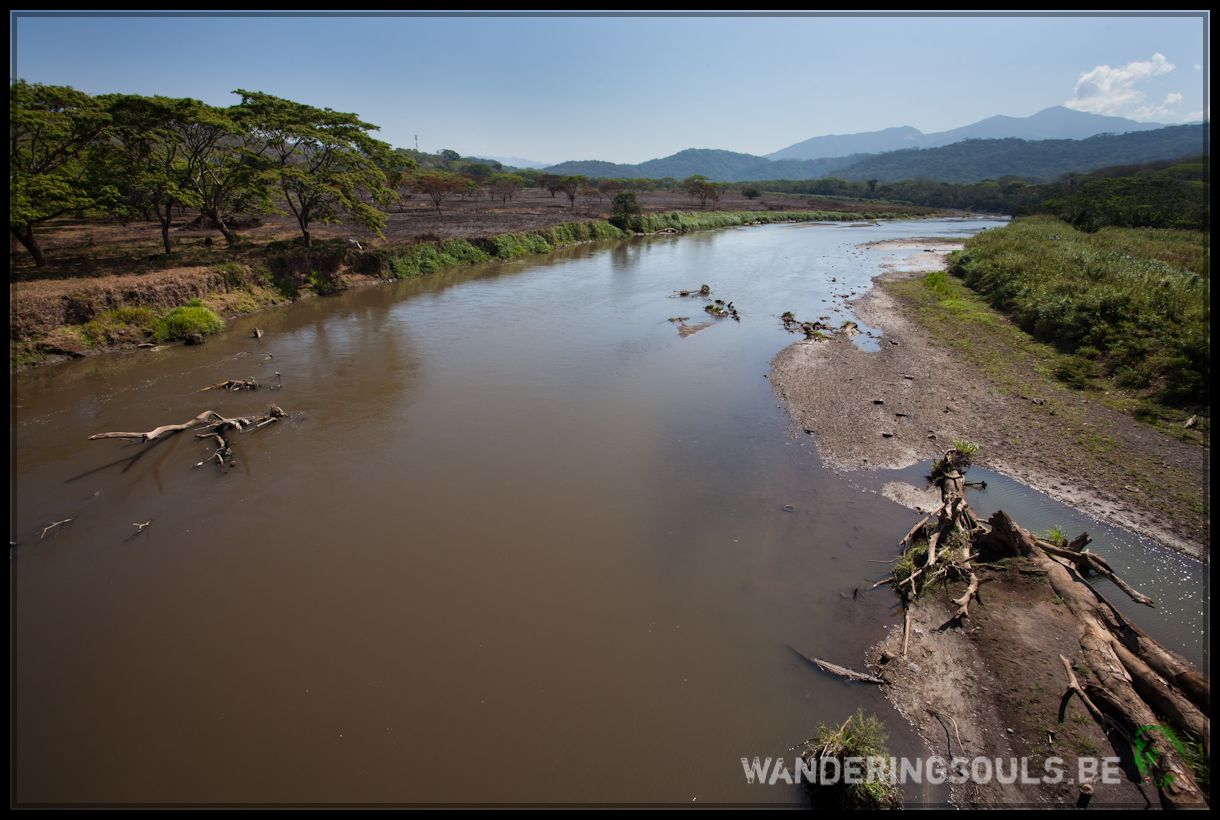 All along the seaside you had these huge apartment buildings where you could buy your own place in the sun and everything was both in Spanish and in English, but the prices were way higher than you would expect from this side of the world. We found Costa Rica to be a very beautiful country with a lot of potential, but for us it was way too expensive! 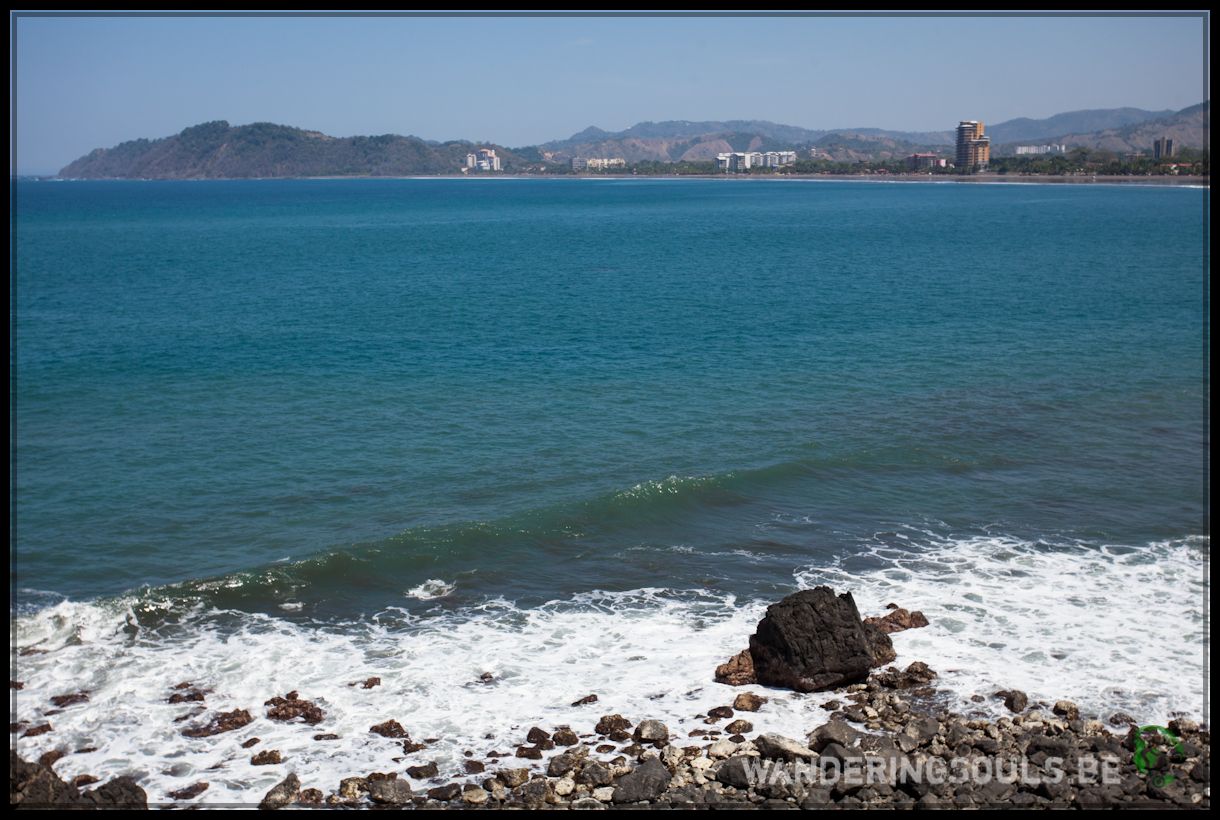 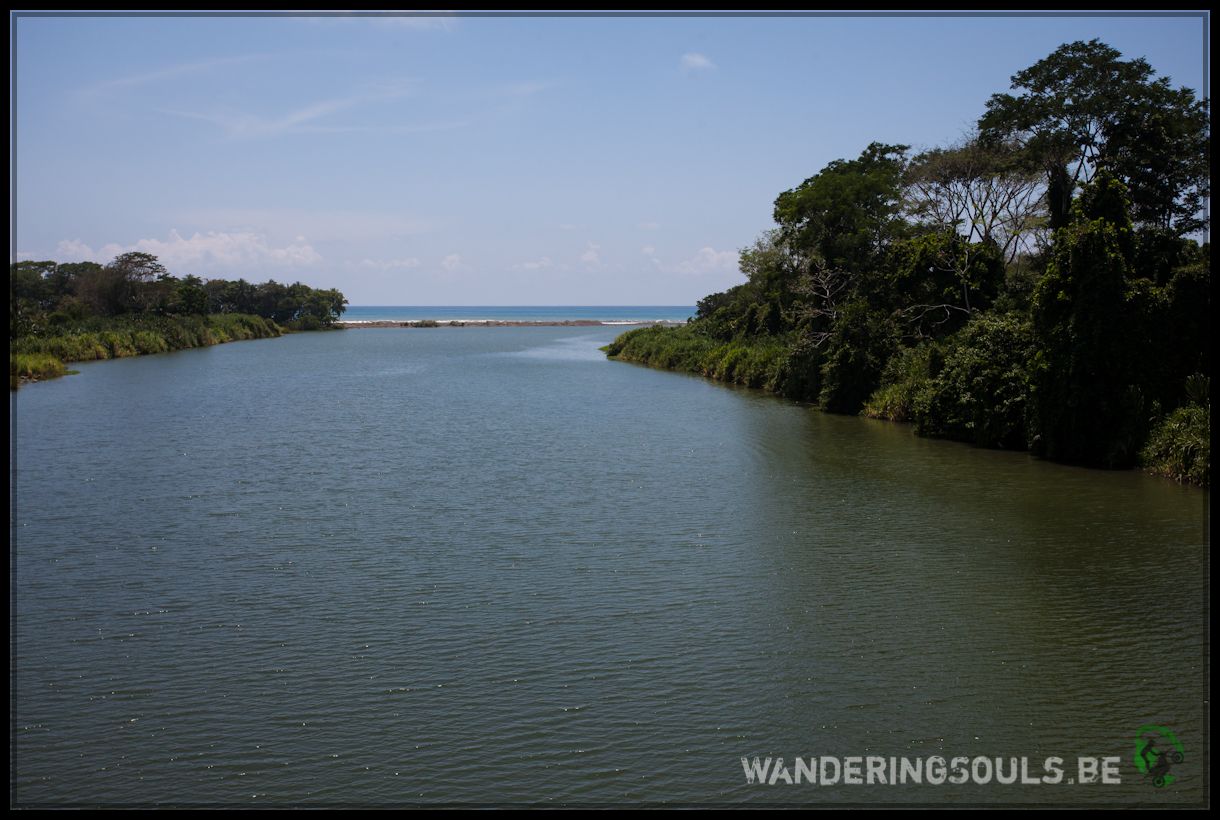 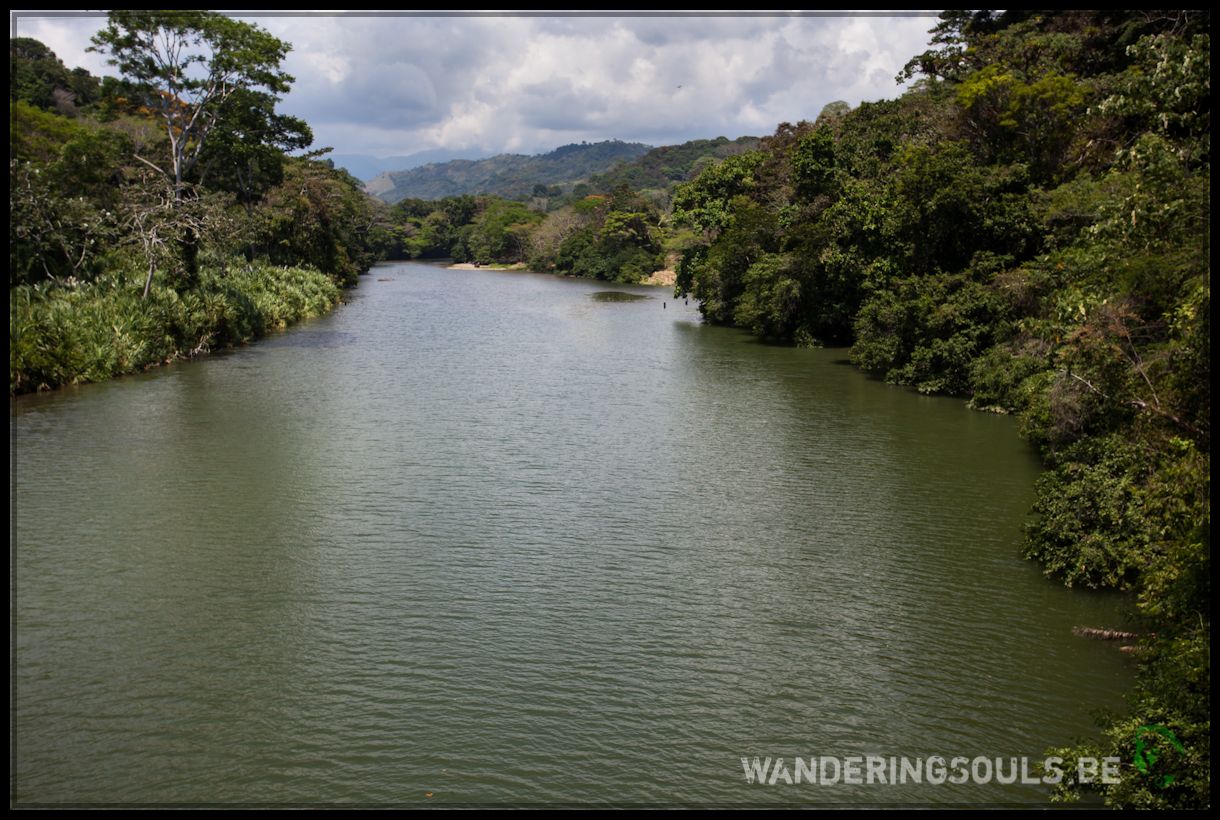 We decided to stop before the border and find a place to sleep on the Costa Rican side, so we could cross the border with Panama bright and early and maybe this wasn’t such a bad idea, because just as we pulled into the parking lot of the hotel, it started pouring down on us. We must admit that we had been lucky so far and that this was maybe our 3rd or 4th day of rain on this trip! 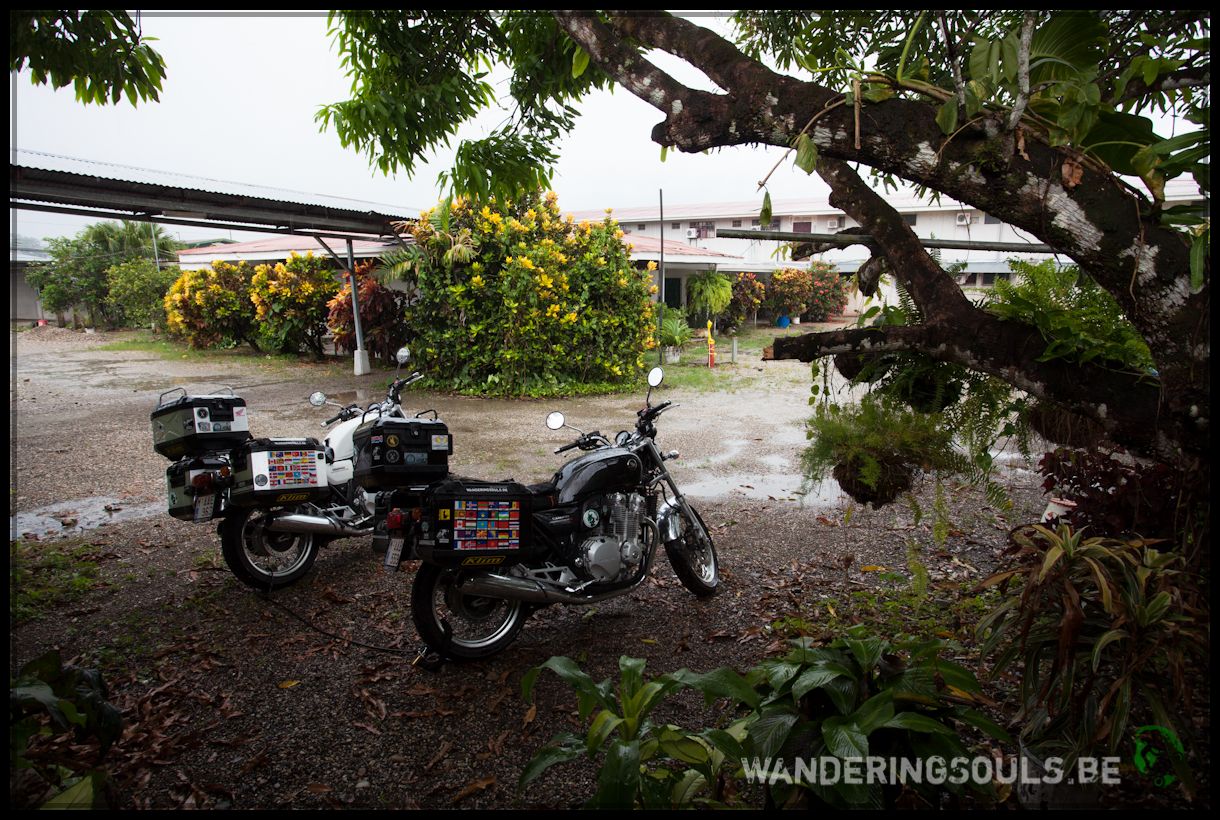 The border crossing into Panama went without any problems so we decided to head on over to Panama city straight away.

We found this very nice quiet and deserted beach not so far from Panama City where you could relax and enjoy the sun for a while. 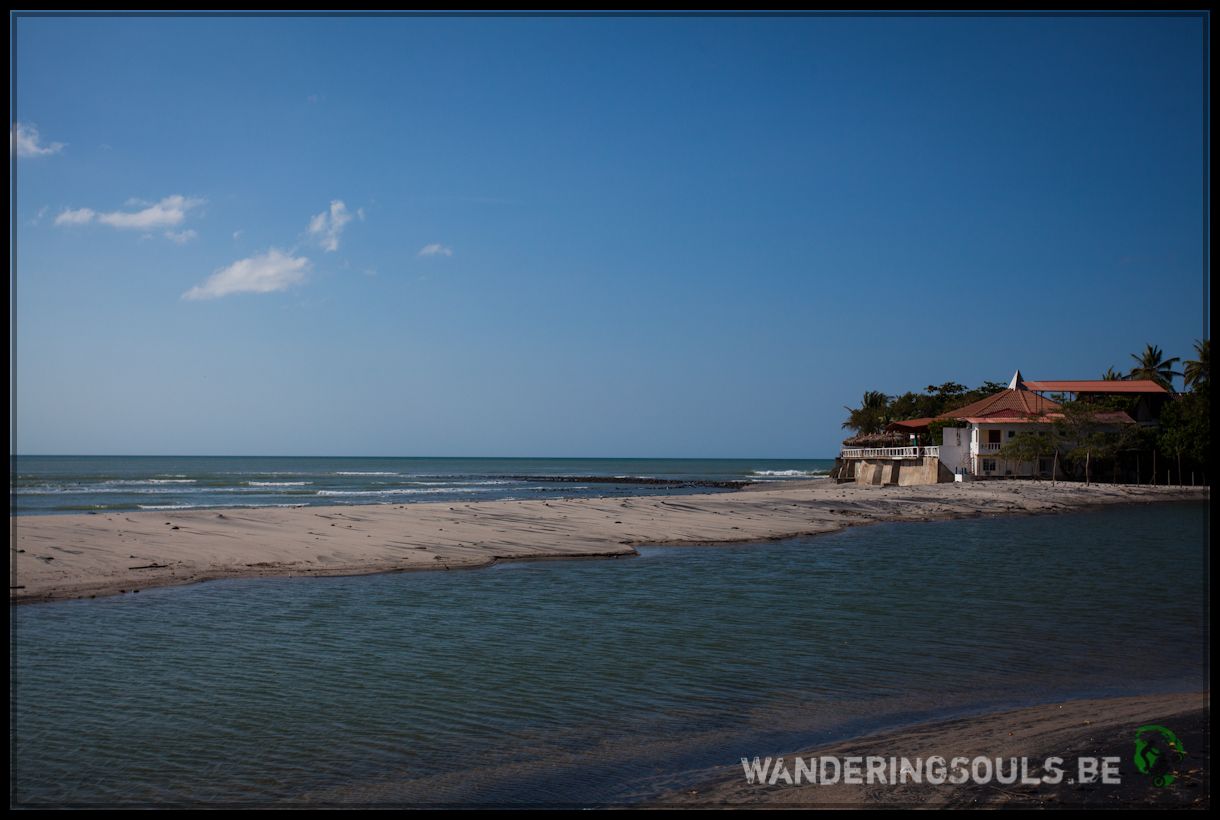 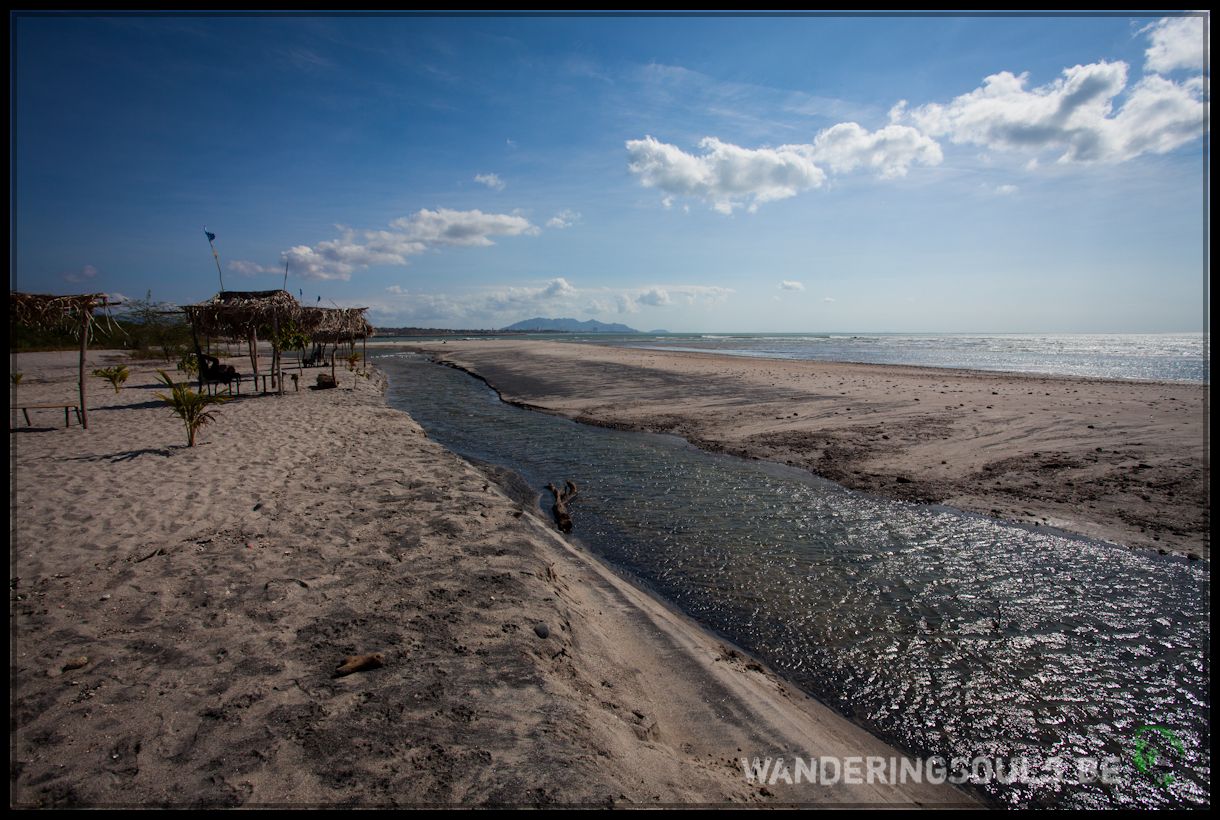 We found a hotel in the centre of Panama city and decided to use this as our base-camp.

At one point there was a strike going on and they had to close down a few streets, but we were lucky that at that point we didn’t have to go anywhere. 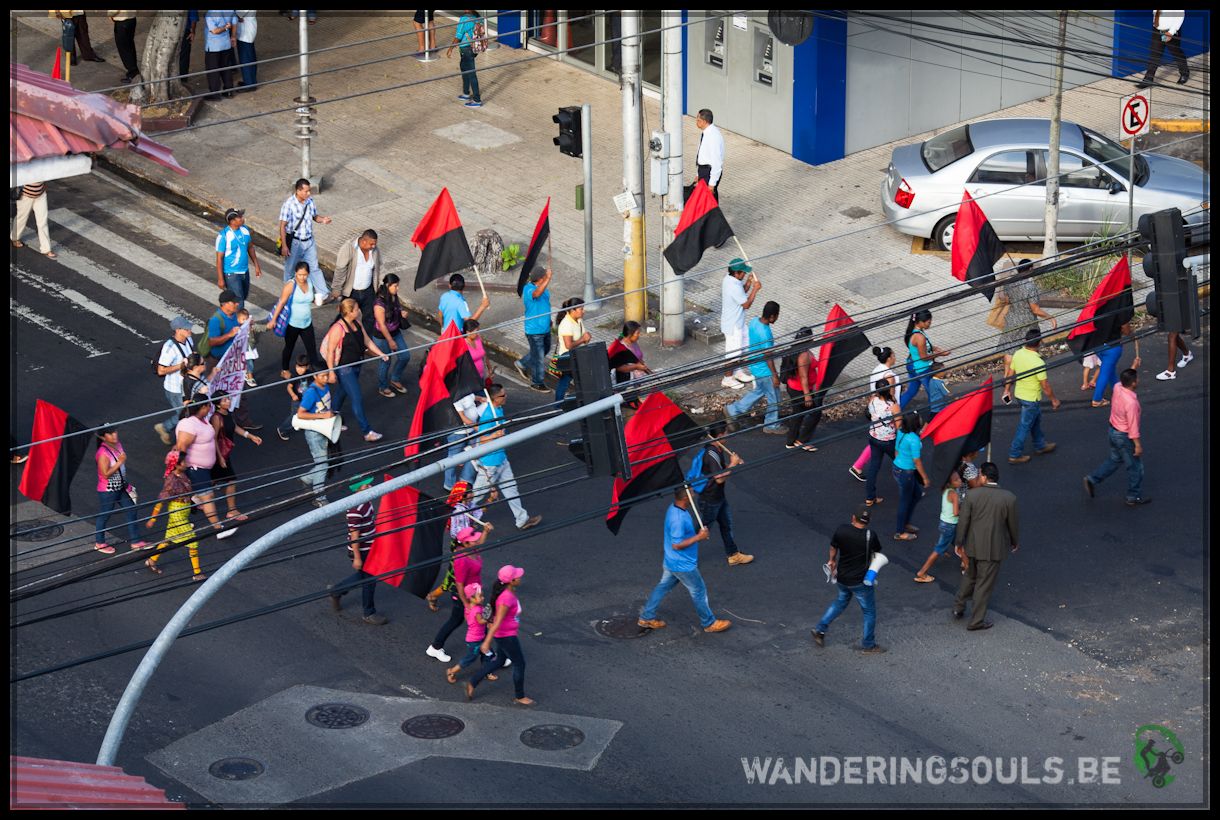 The view from our hotel terrace could have been a lot worse I tell you!! Every night, we went outside to see a movie on the terrace and enjoy the cool breeze and the scenery. 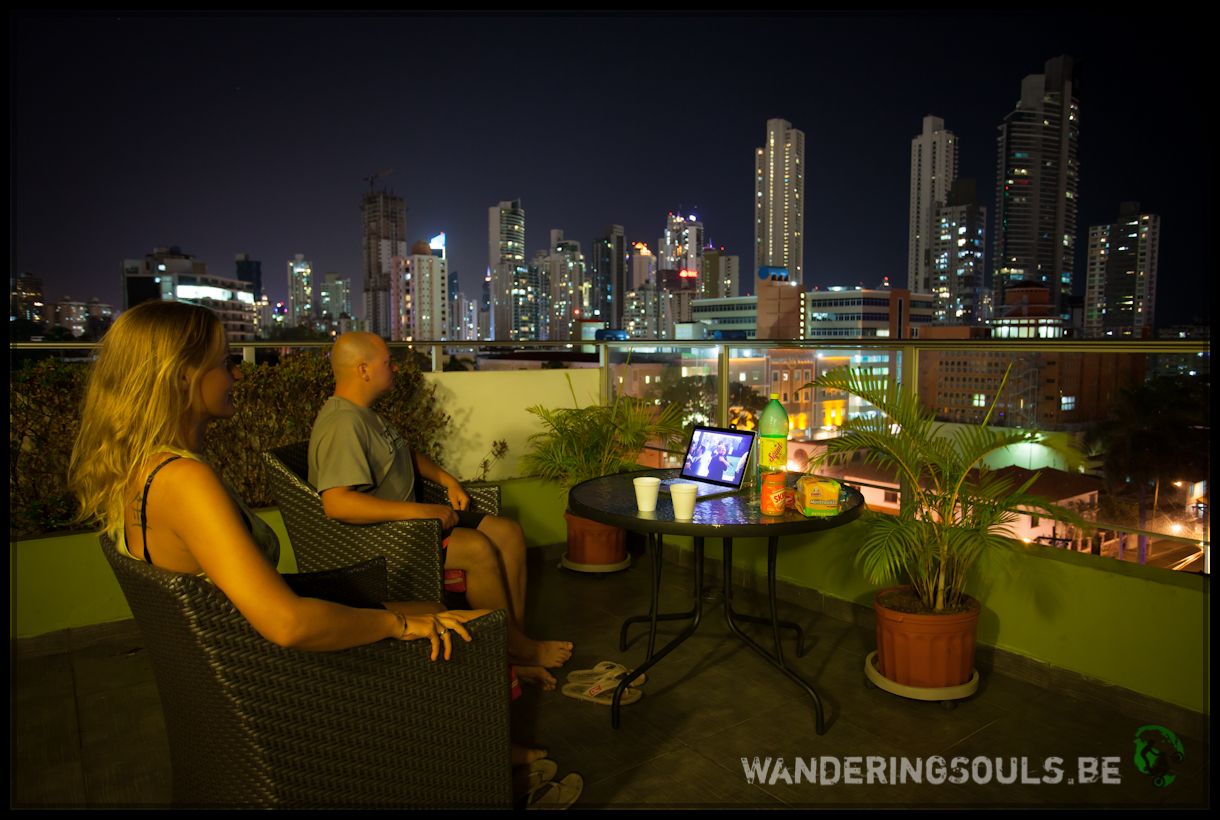 As the title of this blogpost might have told you, we had made some last minute changes to our initial plans…. In Copan, Honduras, Kim had strained her shoulder and this problem was still causing her a lot of pain while riding the bike and on top of that her back pain (that she had since a couple of years) was getting worse almost every day and so we had to make a decision: should we continue towards South America and risk making things worse or should we end this trip in beauty and call it a day and seek medical help back in Belgium…. Well, we decided to do the last option, with a lot of pain in our heart but we didn’t want to risk Kim’s health.

We had to go to the police in Panama city in order to get clearance for the bikes to be shipped back to Belgium and once we got this, we could go with this paperwork to the port the next day.

We had to ride from Panama city to Colon because this was the place where the bikes needed to be in order for us to ship them back home.

The paperwork to get the bikes on the boat from Panama to Belgium was sometimes a pain in the butt, but after a lot of running around, trying to find a place where they would allow you to take copies, Kim could still smile as we were sorting out the paperwork. 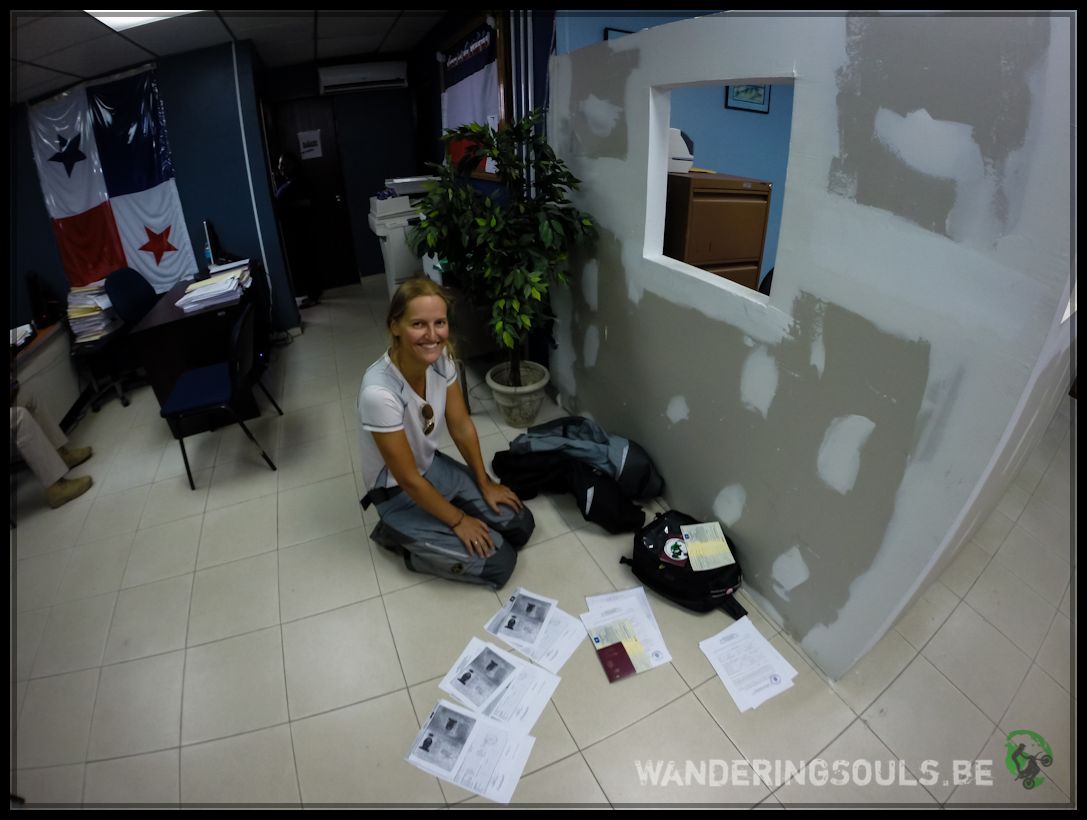 Saying goodbye to the bikes before they get loaded on the ship. We took off the mirrors, since we are putting them on a Roll-on Roll-off ship and we had heard that the mirrors seem to walk away on their own sometimes… The side cases we took off the bikes as well since we could take them as luggage on the plane because we were both allowed two pieces of luggage plus one bag of hand-luggage. 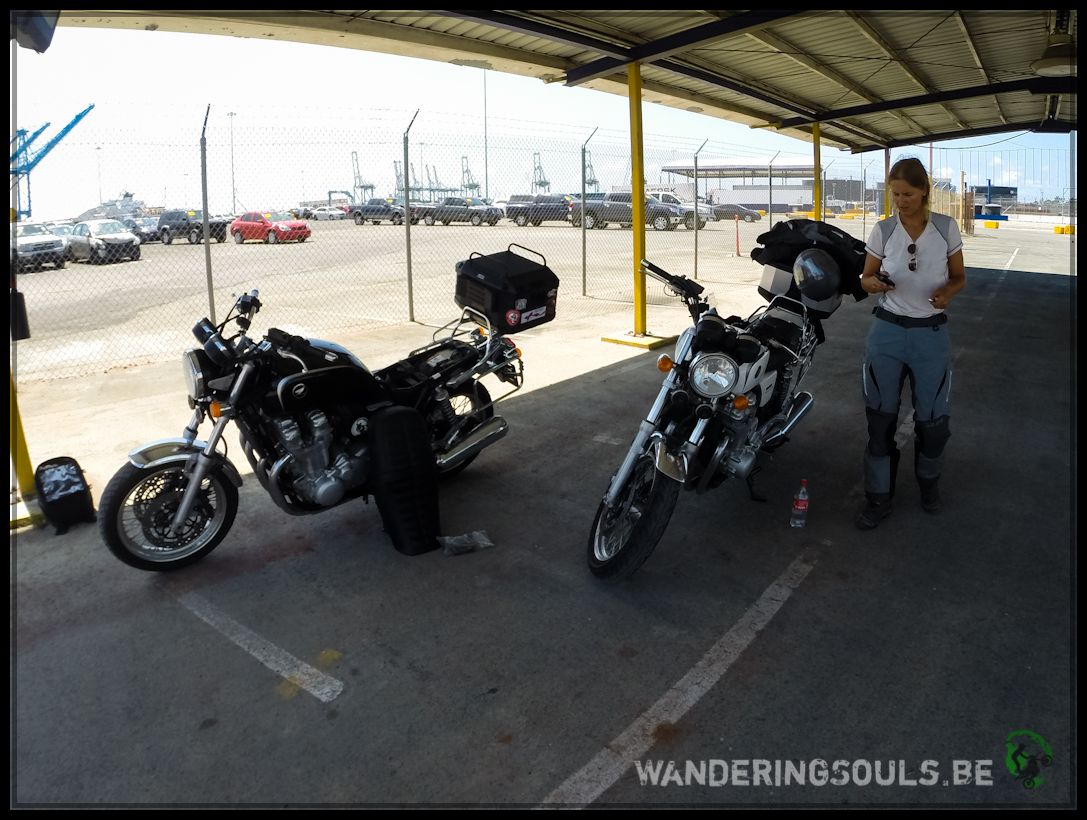 Before they came to take the bikes away, the drug sniffing dog had a blast sniffing all our smelly motorcycle gear. I think the dog was tired and didn’t like the heath too much because he didn’t look like he was enjoying his work that day.

Waving goodbye to the bikes, we took our helmet and jacket and took a taxi towards the centre of Colon where we could take a bus back to Panama city for 2,30 dollars per person and it was a bus with air-conditioning. The drive took about 2 hours and the bus dropped us very near to the hotel. That’s what we call efficient and cheap public transportation!